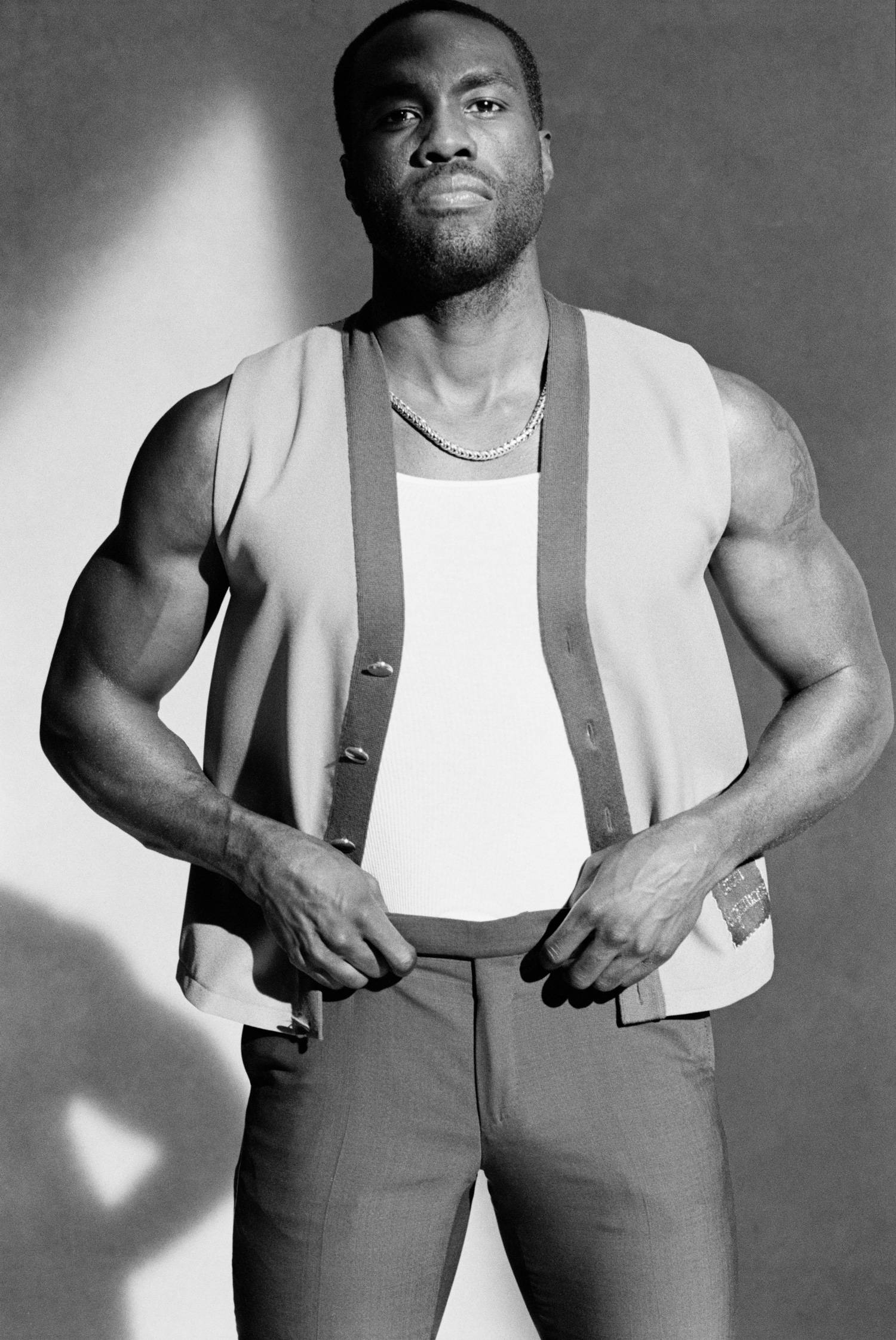 Vest by Gucci. Pants by Ermenegildo Zegna. Tank Top and Necklace Yahya’s own.

Yahya Abdul-Mateen II would kill for a nap. Can you blame him? Four years after landing his first role in Baz Luhrmann’s Netflix hip-hop musical The Get Down, the New Orleans native is everywhere. After brief appearances in Baywatch and The Greatest Showman, the 33-year-old, Yale-trained actor went bicep-to-bicep with Jason Momoa in Aquaman, as the scorned supervillain Black Manta. His blunt-force physicality and calm gravitas had him poised for action stardom, but Abdul-Mateen II, who also graduated from UC Berkeley with a degree in architecture, had designs on a more versatile body of work. Appearances in zeitgeist-capturing projects such as Jordan Peele’s Us and Netflix’s Black Mirror culminated last year in Abdul-Mateen II’s role as Cal Abar in Watchmen, HBO’s ambitious retelling of the seminal graphic novel. A character that began as a blandly supportive TV husband gradually morphed into the show’s beating heart, transforming Abdul-Mateen II’s professional outlook in the process. Later this year, he will star as the title character in Jordan Peele’s remake of the horror classic Candyman, before flexing his dramatic muscles in Aaron Sorkin’s long-gestating The Trial of the Chicago 7. Taking a break from training for his starring role opposite Keanu Reeves in next year’s untitled The Matrix sequel—we told you the man was busy—Abdul-Mateen II reconnected with Momoa to discuss everything from Shaq to Shakespeare.

JASON MOMOA: I’m way up on top of a mountain. Where you at?

ABDUL-MATEEN II: I’m in northern California. I’m headed to see my mama, my sisters, nieces, and nephews. Doing the family thing. I just finished a project in New York and have been training for The Matrix, but now I’m like, “Fuck all that, put everything down, and get away for a little bit.”

MOMOA: What’s going on in your world right now?

ABDUL-MATEEN II: I’m just chilling. After working all over the place for so long, self-care is my priority. I gave up my place right before Aquaman, and haven’t had a place since then. This business can take over your life if you allow it to.

MOMOA: When we were making Aquaman, I’d joke around that Yale couldn’t have prepared you for those intense fights and long shoots. How much did you rely on the tools you learned at school, and how much have you picked up on your own?

ABDUL-MATEEN II: I’ve had so much personal growth over the last couple of years. Where I’m at now is taking everything I learned in school and making it my own, designing my own process, shaping my own way of working. That way, I’m not thinking about it too much. Aquaman was probably the toughest job I’ve had, because I was overthinking it. I was applying a lot of drama school shit to some-thing that was really about going out and playing. I was so serious, trying to focus on my objectives and the text work, stuff like that. For Aquaman, I had to lean into the fun of it all and get out of my own way. That comes with having more confidence on set, and having that confidence now, I can have conversations with the director. I can have a different opinion. I don’t always have to be on the same page as them. I can satisfy my own artistry as opposed to satisfying somebody else.

MOMOA: When you first started your career, did you ever imagine you’d be here now?

ABDUL-MATEEN II: I thought this would happen much, much later. I wanted to graduate school and do a Broadway play, or maybe get a lead in Shakespeare in the Park. I thought I’d be doing a lot of theater. Success used to look like getting really good jobs and making lots of money. What success means now is having the freedom to choose the type of jobs I want. Having the freedom to say, “You know what? I’m going to go do Aquaman, and then I’m going to go do some dramatic shit, and then I’m going to go do something that’s fucking silly.” And then having the space to say, “I’m not going to work for a couple of months. I’m going to hang out with my family, or start one.” Success for me means freedom.

MOMOA: Who were your heroes growing up?

ABDUL-MATEEN II: My dad. My uncles. Strong men who had integrity, who were protectors. In terms of entertainment, I loved Shaquille O’Neal, because he was just larger than life. He’s 7’1”, he’s rapping, making movies. He seemed like a big kid.

MOMOA: If you had six months off, what would you do with your time?

ABDUL-MATEEN II: I really want to build a motorcycle with my brother. My dad always drove a motorcycle. Hearing that motor coming up the block helped us know he was coming home. Also, being on the beach or on a boat with a cigar and a drink. Maybe some Hennessy, you know what I’m saying? When the Henny’s in the system ain’t no telling.

MOMOA: I didn’t know you smoke cigars! I love cigars.

ABDUL-MATEEN II: Someone gave me a Nicaraguan one. I like a smooth cigar, but I still want to get into them more.

MOMOA: On Aquaman 2, that’s what we’ll have. We’ll have ourselves a cigar. And you know what, buddy? I love building bikes, too.

ABDUL-MATEEN II: I got the idea from Keanu Reeves. He owns a motorcycle company.

MOMOA: When you and I first met, we went down to the Byron Bay Bluesfest. What are you listening to now?

ABDUL-MATEEN II: I don’t have an extensive catalog, but I’m listening to the same stuff on rotation: Michael Kiwanuka, D’Angelo, CeeLo Green, André 3000, and Gary Clark Jr. Music that has soul. I also like this young rapper named YBN Cordae. I got into vinyl after checking out your collection back in Australia. I’ve got a little ritual now where I listen to Marvin Gaye on vinyl almost every morning.

MOMOA: If you could play a musician in a biopic, who would it be?

ABDUL-MATEEN II: Marvin Gaye all the way. I’ll just grow my beard and get real skinny and sexy. For me, music is more emotionally accessible than acting.

MOMOA: You’ve got a background in architecture. Is that still something you have an interest in?

ABDUL-MATEEN II: Not as a profession. Acting treats me much better than architecture would have.

MOMOA: Does it still inspire you?

ABDUL-MATEEN II: It does. I started painting this summer when I was working on Candyman, and that allowed me to step back into that creative space and exercise that muscle. I’ve also started writing, and when I write I use my architecture brain—I’m thinking about the plans, the order of things, and the structure of storytelling. I still have a desire to design my own house or to design spaces, or, if I direct a movie, to work on the set design. My architecture brain has morphed to where now, as opposed to buildings and structures, I’m creating set pieces or stories in my mind.

MOMOA: What can we expect from Candyman? I want the inside scoop.

ABDUL-MATEEN II: I hope that it’s scary as shit, but also meaningful. It’s a Jordan Peele project [Peele co-wrote and produced], so it’s going to be culturally important, but at the same time, you can’t do Candyman without being scary. If we hit those two things, we’ll be successful. It’s also a Chicago movie. I had never been to Chicago, so I got to spend time there. Coat and Shirt by Lanvin.

ABDUL-MATEEN II: Sure did. It’s called The Trial of the Chicago 7, although we shot it in New York. I play a character named Bobby Seale [who co-founded the Black Panther Party]. Aaron Sorkin wrote and directed it.

ABDUL-MATEEN II: Honestly, Black Manta in Aquaman was the hardest one to get into. It’s a PG-13 movie. It’s not dark. I had to undo a lot of my expectations in terms of what I thought that experience would be, and then I had to get on-board with the vision and make it my own. Aquaman felt like a different medium. I’m used to doing Shakespeare. Or at least I was when I stepped into that. I had to simplify my brain and go out and have fun. Aquaman felt like a clown class more than anything. In terms of shaking one-off, probably playing Bobby Seale, who was jailed, who was bound and gagged in the courtroom. It was an intense, emotional shoot and I had to make sure I was balanced before I left set. Otherwise, I’d be taking some pretty heavy stuff back home. I don’t need to be taking my work problems home when I barely even have a home in the first place.

MOMOA: How important is it for you to tell stories that grapple with race and representation? Do you make that a priority when you’re choosing roles?

ABDUL-MATEEN II: Honestly, I didn’t used to, because I feared that it might put me into a box. I was selfishly trying to do whatever the fuck I wanted. If I wanted to go and do Baywatch, I’d go do Baywatch, and then I’d do The Handmaid’s Tale. That’s a good way of working, right? It aligns itself more closely to my ideas of freedom, of having the choice to do any type of project I want. But after seeing the reaction to Watchmen, and seeing how important representation is to people, and being a part of those meaningful conversations about history, it’s become something that’s more important to me. I want to tell stories about representation, to show black men in a positive light, especially in worlds like Watchmen, in those science-fiction spaces where the industry is still learning that we’re bankable and that those stories matter.