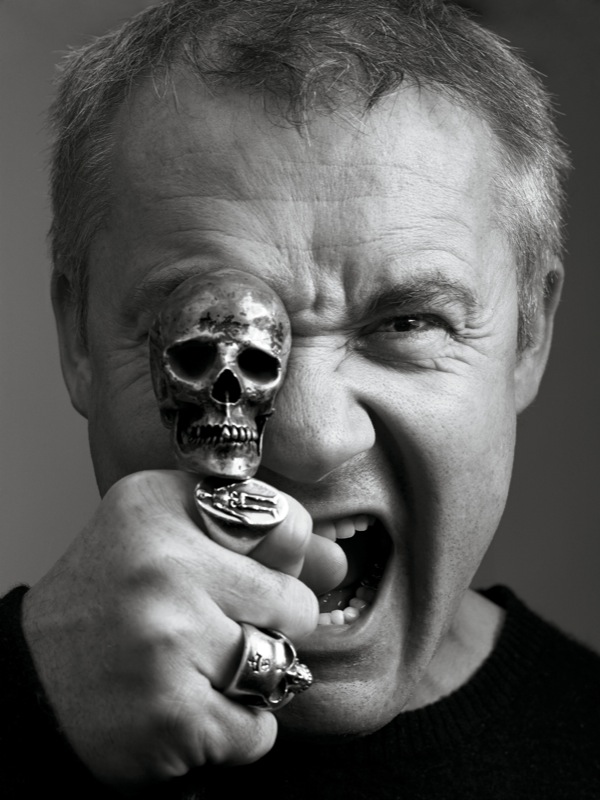 If ever there was an art-world renegade, it’s Damien Hirst. Loved and loathed in equal measure, Damien Hirst is the world’s wealthiest living artist, and maybe its most infamous. In 2008, Hirst isolated his long-standing galleries and independently sold an entire show of 223 pieces at a Sotheby’s auction to the public (on the day the financial markets tanked, no less). Perhaps the best illustrations of Hirst’s polarization are his collection of animals preserved in formaldehyde—while certain pieces have been banned from exhibition in New York by the Department of Health, in 2002 Mother and Child Divided (which features a preserved cow and calf) won Damien the prestigious Turner Prize.

Over the span of his career, Hirst has made sure to chime in to Interview every so often. Here are some fun facts, lessons learned, and other fragments of his tumultuous career, reflecting a confidence and free spirit that he has sustained through two decades:

CAREER RELAYED IN ONE SENTENCE:  See, I got success very early, and then I fucked my way to the bottom. [Lily Allen, February 2009]

FIRST ARTISTIC INFLUENCE: In the two-year interval between school and art college, I met this old guy. He was my next-door neighbor, and I used to see him wandering the streets during the daytime and returning home every night with the objects he’d collected. He was like a bag man. One day he disappeared, so I climbed his fence to see what had happened. I went into his house and I couldn’t believe how much stuff was crammed into each room. … His whole house was like one hell of an installation. I didn’t realize it at the time, but that affected me more than anything else. [Damien Hirst by David Furnish, September 1997]

FRIENDS IN HIGH PLACES: I always get suspicious of famous people who’ve only got other famous people as friends. [Lily Allen, February 2009]

ARTIST-COLLECTOR RELATIONSHIPS: When you get more mortal you really work more with collectors. [Damien Hirst by Anthony Haden-Guest, December/January 2009]

DEATH: It’s just something that inspires me, not something that pulls me down. I used to get called morbid at school. I have always loved horror films; I like being frightened. I definitely think about it. And every day your relationship with death changes. And every day I sort of feel like I know it more. I’ve always thought about it. Maybe I shouldn’t? I don’t know. We’re here for a good time—not a long time. I love quotes like that. There are no pockets in a shroud. [Damien Hirst by Anthony Haden-Guest, December/January 2009]

ORIGINALITY: If it’s a good idea, then lots of people have had it before. [Damien Hirst by Anthony Haden-Guest, December/January 2009]

FOR THE HATERS: Fuck ’em all! Who knows? Before I went to Goldsmiths, I sort of tried to be original. But then there’s just so much in the world, and so much of it is derivative. Everything comes from somewhere and it’s just such a mish-mash. At Goldsmiths we were kind of freed. You don’t have to worry about that! If it looks good, it is good. … If you are constantly creating visual things, you are getting loads of ideas from everywhere. I think that there’s only been one idea and that was fucking painting your hand red in blood and stamping it on the cave wall. And then, after that, we’ve all just ripped that off and copied it. But what I think is probably different about our generation is that we never felt the need to be original. That kind of frees you up to do what you want. I mean, like the spot paintings. There was Larry Poons. [Damien Hirst by Anthony Haden-Guest, December/January 2009]

FUN FACT, BROUGHT TO YOU BY HIRST: Do you know the only pop group with a name that’s a palindrome to have a chart hit with a title that’s also a palindrome? … It was ABBA, with “SOS.” [Lily Allen, February 2009]

ON RUNNING A BUSINESS: I always try to make everyone mellow down—make sure everybody’s happy. The people I have employed have always kind of stayed with us. In a way you are hiring artists, you know? A lot of people who come to work for you are artists in their own right. And they want to work for you because they want to pick something up. [Damien Hirst by Anthony Haden-Guest, December/January 2009]

RICH ARTISTS: I quite like what happens when you make the kind of money that we made in the auction. Because money does talk. There are a lot of people who like money but who don’t like art. And when you see that… I love that. [Damien Hirst by Anthony Haden-Guest, December/January 2009]

ON LILY ALLEN BUYING CHRISTINA MARCLAY’S UNTITLED (GUNS N’ ROSES AND SURVIVAL OF THE FITTEST): You’re mental! What got you into that? You’ve got more money than sense, buying that rubbish. I bet you like those fucking guys who cut them cows in half and do all that rubbish. That’s not really art! [Lily Allen, February 2009]

ON PHARMACY, HIS RESTAURANT: I just want to make it a great place to be. Whether that’s art or not, I don’t know. What I do know is it’s fulfilling all my needs as an artist. I think it’s art. It will be a little exhibition that people go to and have a great time in—a much better time than when they go to most galleries. It feels right to me, so I’m doing it.  [Damien Hirst by David Furnish, September 1997]

THE DIAMOND SKULL: I had hoped that it would get sold privately to someone in the next eight years. It depends what happens with this debt and stuff. But I think it’s starting to look cheap. Isn’t it? [Damien Hirst by Anthony Haden-Guest, December/January 2009]

MORE FOR THE HATERS: “What’s wrong with sensation? It’s like touching skin.” Sensation is an element of what I do, and why not? [Damien Hirst by David Furnish, September 1997]

FAME!: With Warhol, everything kind of got connected. It’s very hard as an artist to admit you have a desire to be famous. … But I think you have to admit that you want to be famous, otherwise you can’t be an artist. Art and fame together are like a desire to live forever. [Damien Hirst by David Furnish, September 1997]

ON CONTINUING HIS CAREER: I quite like it to be risky. I’m 43. I’m not ready to sit down in a chair with my name on it yet. I’ve arrived at that point in the art world where there really is a chair that you sit in. [Damien Hirst by Anthony Haden-Guest, December/January 2009]

MOST FREQUENTLY-USED VERB IN INTERVIEW: “Fucking”

ON BLACK MONDAY, POST-AUCTION:
HADEN-GUEST: So it’s like Madonna and U2 sacking their labels and going independent.
HIRST: Yes. It’s better than doing a fragrance, I guess.
HADEN-GUEST: Perhaps you should do a fragrance.
HIRST: Really? Formaldehyde! Crank! Who knows? [Damien Hirst by Anthony Haden-Guest, December/January 2009]