Niia is Listening to Billie Holiday, Marvin Gaye, and Journey 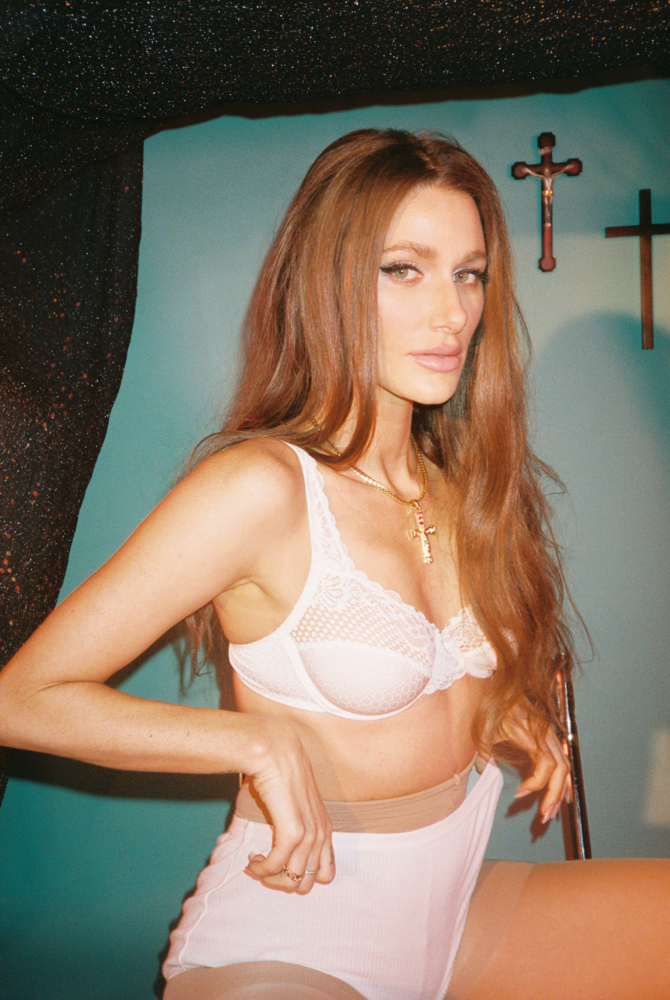 This is “Add to Queue,” our attempt to sort through the cacophony of music floating in the algorithmic atmosphere by consulting the experts themselves. Our favorite musicians tell us about their favorite music—the sad, the happy, the dinner party-y, the songs they want played at their funeral. In this edition, we speak with pianist and “super dramatic and Italian” singer-songwriter Niia about singing for Björk and Gloria Steinem, her love of The Sopranos, and the butt tattoo that inspired the title of her latest album, II: La Bella Vita.

ERNEST MACIAS: So catch me up to today. What has been the musical journey for Niia, up to this moment?

NIIA: This music journey, oh man. Just when you think you figured it out, it changes. I moved to L.A. six years ago and I released my EP and my first album I. I got signed to a major label, was working with the same producer, who I loved, and everything was great—then everything started to change. I think this second album was the baby of all the stuff that was spiraling out of control in my life. I left my major label, I left a six-year relationship, I had to finish this album by myself. It was just a lot of bad things happening. The reason why I called it La Bella Vita is because 1) I’m super dramatic, and Italian. 2) It’s my shitty butt tattoo. I  actually have it on my butt. My first shitty St. Mark’s tattoo—I hated it growing up.

NIIA: Oh my god, it was this crazy lady who did it and I hated it for years and was thinking about removing it. But I realized,  “You know what? I think I’m going to put my butt on my album cover and name it The Beautiful Life,” which is what La Bella Vita means. It’s been the worst couple of years for me, honestly, personally. My family’s gone through some shit, but life honestly isn’t that bad. I really do have a beautiful life. I’m from Boston originally and spent years in New York, and I’m honestly a sarcastic, negative person. I felt there was some irony in calling it that. That’s the silver lining for me. All this shit happened, but I’m still here and I actually think this music is better than the music I made before.

NIAA: Does that answer it?

MACIAS: That totally answers it. What was the last song you listened to?

NIIA: When I was really young, I think it would probably be Jennifer Holliday. She sang that song from Dream Girls. You know, “And I Am Telling You I’m Not Going” by Jennifer Hudson. I kind of revisit it.

NIIA: I was young, but I think that’s the first time I felt really affected by something. I was actually in Provincetown and she was singing in a little church in the center. And my mom was like, oh my god, Jennifer Holliday’s performing, you have to see her. She was this little skinny woman with this little shitty karaoke machine. And she just had the most amazing voice I’ve ever heard.

MACIAS: What was the first concert that made an impact on you?

NIIA: God, I don’t even remember. I mean, my mom was a piano teacher so I had shitty teenagers playing piano recitals in our living room all the time. It was probably Björk. I saw Björk a couple of years ago actually, and it was just amazing to see the range of her show. One song is just her singing a cappella and then the next it’s her and an Icelandic choir and a Tesla coil. It was just bananas how cohesive it was, but yet so drastically different between each song.

MACIAS: I have yet to see her live but everyone that’s seen literally has the same reaction.

NIIA: I was lucky enough to actually get to sing for her, and I was having diarrhea before the show. It was when I was in New York, so it was probably seven or eight years ago. There’s a woman’s group —I forget the name of it, but Gloria Steinem is involved.  I got to sing for Gloria, Björk, Patti Smith, and a bunch of other really amazing feminist writers. They were adding a singer-songwriter division. They set up writers or creatives that are female and give them these retreats. I sang “My Funny Valentine” or something silly, and Björk was there with some weird waffle on her head. I remember she used that hot pink Maybelline mascara. She was in the bathroom using the cheap Maybelline. I was like, “Wow, you’re fucking cool.”

NIIA: My favorite movie soundtrack would probably be The Godfather. Nino Rota.

MACIAS: That’s a good one, I haven’t heard that one in a minute. Plus you are Italian, so, makes sense.

MACIAS: Your dream collaborator of all time or current—or both?

NIIA: I would have loved to collaborate with Amy Winehouse. Even though she terrifies me. She seems like she’d just boss me around and I’d let her—which would be fine. Right now, maybe someone like Thundercat would be fun.

MACIAS: That would be fun. What’s a song that always puts you in a good mood?

NIIA: There’s a The Neptunes remix of Sade’s “By Your Side” that I really love. Because it’s not only my favorite song but it’s Pharrell doing his thing on it. I forget how old it is but that one always makes me feel like she’s by my side.

MACIAS: Amazing. I’m a huge Sade fan so I’m going to have to give that a spin.

NIIA: She’s my favorite. I would love to do a duet with her too, but I would pee my pants. She’s definitely one of my biggest inspirations.  I worked with her producer, Stuart Matthewman, and the whole time I just couldn’t get through the session because there was Sade stuff all around his house. I had this stupid grin on my face because I just couldn’t focus. That’s why I wear a braid on stage because she always used to wear a braid.

MACIAS: Oh my god, that’s amazing. Which artists or songs would you play on a road trip?

NIIA: Probably Gabriel Garzón-Montano. I love his stuff.  Drake actually sampled him from his first album. He’s kind of like a D’Angelo, he’s dope. I would say him or James Taylor. MACIAS: What about a dinner party?

MACIAS: Classy dinner. What about a song that you would play while you were crying in your bedroom?

NIIA: There’s this song by an artist called Nancy Ames. She only released one album on vinyl but the song is called “Angel Cake and Wine” and it’s just so sad. I put that on and I just can weep anytime I hear it. Also, “Don’t Stop Believing” makes me cry because I think of the finale of The Sopranos. Because I’m a huge Sopranos fan.

MACIAS: That’s a weird song to cry to, but also it makes sense…

MACIAS: Triggering. What about music you would listen to during a breakup?

NIIA: Besides my songs, probably Jhené Aiko or Summer Walker.

MACIAS: Ooh yeah, Jhené would definitely hit the spot for a breakup.

MACIAS: If you’re high, what would you like to listen to?

NIIA: “Hopelessly Devoted To You” by Olivia Newton-John.

MACIAS: Great, great karaoke song. You said you’re a little shy, but are you shy when it comes to karaoke?

NIIA: Not when I’m alone in the room by myself, which I’ve done before, or with two friends. I’ve only done it once in the open space and I had some older woman be like, “Hey, you’re good at this. You should audition for that American Idol.”

MACIAS: Do you play any instruments?

NIAA: I play the piano.

MACIAS: What’s an instrumental song you’d like to learn how to play?

NIIA: Brad Mehldau. He’s a jazz pianist, and he makes instrumental music, but he has this one song called “When It Rains” and it’s just so beautiful. Or a Chopin Nocturne. I used to play classical piano and there’s this one Nocturne, it’s actually from—have you ever seen the movie The Pianist?

NIIA: Where Adrien Brody plays that big piece for the Nazi guard. It’s that song. Me and my mom still have a running bet. She’s like, “If you can learn how to play this ‘Nocturne,’ I’ll give you $1,000.” That was 10 years ago and I have yet to learn it.

MACIAS: Well, maybe soon you’ll learn it and claim your cash prize. If your life were a TV show, what would be the theme song?

NIIA: Probably “Good Morning Heartache” by Billie Holiday. It would slow zoom to me smoking a cigarette in a window, with the sun coming up.

MACIAS: I already see it. The drama of it all.

NIIA: It might be a Netflix series—maybe not a reality TV show, but I do love reality TV.

MACIAS: What’s a song that reminds you of your youth?

NIIA: Lauryn Hill, “To Zion,” for some weird reason. It’s a song about her child. I felt like I listened to it all the time and didn’t really know what it was about but I remember just loving that song.

MACIAS: What about a song that if everyone listened to it, it would change the world?

NIIA: I think that would be Marvin Gaye’s “Save The Children.” It’s one of my favorite songs. It’s not as famous as it should be. Every time I listen to it, whether it was 10 years ago or yesterday, it still applies.

MACIAS: It’s such a nice song. What’s your favorite song of your songs?

NIIA: “If You Won’t Marry Me Right Now.” I think that one is really special. I’m excited to sing that one live for people and point my finger in people’s faces.

Listen to Niia’s “Add To Queue” playlist below, and follow Interview on Spotify for more.