Today, Folasade Helen Adu, the artist better known as Sade, turns 60. Born to a British mother and Nigerian father, the songstress never intended to become a music icon. In her early days she went to fashion school in London, had a brief career as a model, and eventually formed the band Sade. The band found success with the instant classic 1984’s “Smooth Operator,” turning Sade herself into a music superstar and a reluctant fashion icon.

In 1988, after three sold-out nights at Radio City Music Hall, the elusive pop singer sat down with writer Vince Aletti for our 1988 November issue. In honor of Lady Sade’s birthday, we revisit the best moments from her Interview cover story, where she opens up about her love for dancing, the tabloids, Prince, and why she “would never go to the Limelight.”

VINCE ALETTI: Did you go out dancing?

SADE: Yes. I think maybe because we were quite deprived of music, when my brother and I grew up and discovered it, we really got excited by it. We had three records in the house when we were young: the soundtrack to Oliver —

SADE: Yeah, very inspiring. [sings] “Whe-e-e-e-ere is love?” And we had Dinah Washington’s Greatest Hits and Sinatra and Basie.

ALETTI:  Well, it’s not as bad as it could have been.

SADE: It’s not too bad, but we didn’t have a record player. That’s the problem. We had a sewing machine. [laughs] Eventually my brother bought a record player. I suppose I started going out to dance when I was 14 or 15. I was lucky. My brother was three years older, and when he was 17, he started to drive, so he could take me places. Otherwise, I would have been dependent on public transport, which would have been impossible, since there was practically none.

ALETTI: Did you have to go far?

SADE: Yeah, to go to a decent club, we used to go about 14 miles away, to a town called Ipswich. There was an American air base there, and they had all the good imported records. Unfortunately, you’d get accosted by the airmen, so I didn’t go there very regularly. They’d think, these young girls, they can’t have come here to listen to the music; they’ve come to look for the men — and we had come to listen to the music. There was one other club where they played really brilliant music, and you could safely go there. It was quite young and casual. 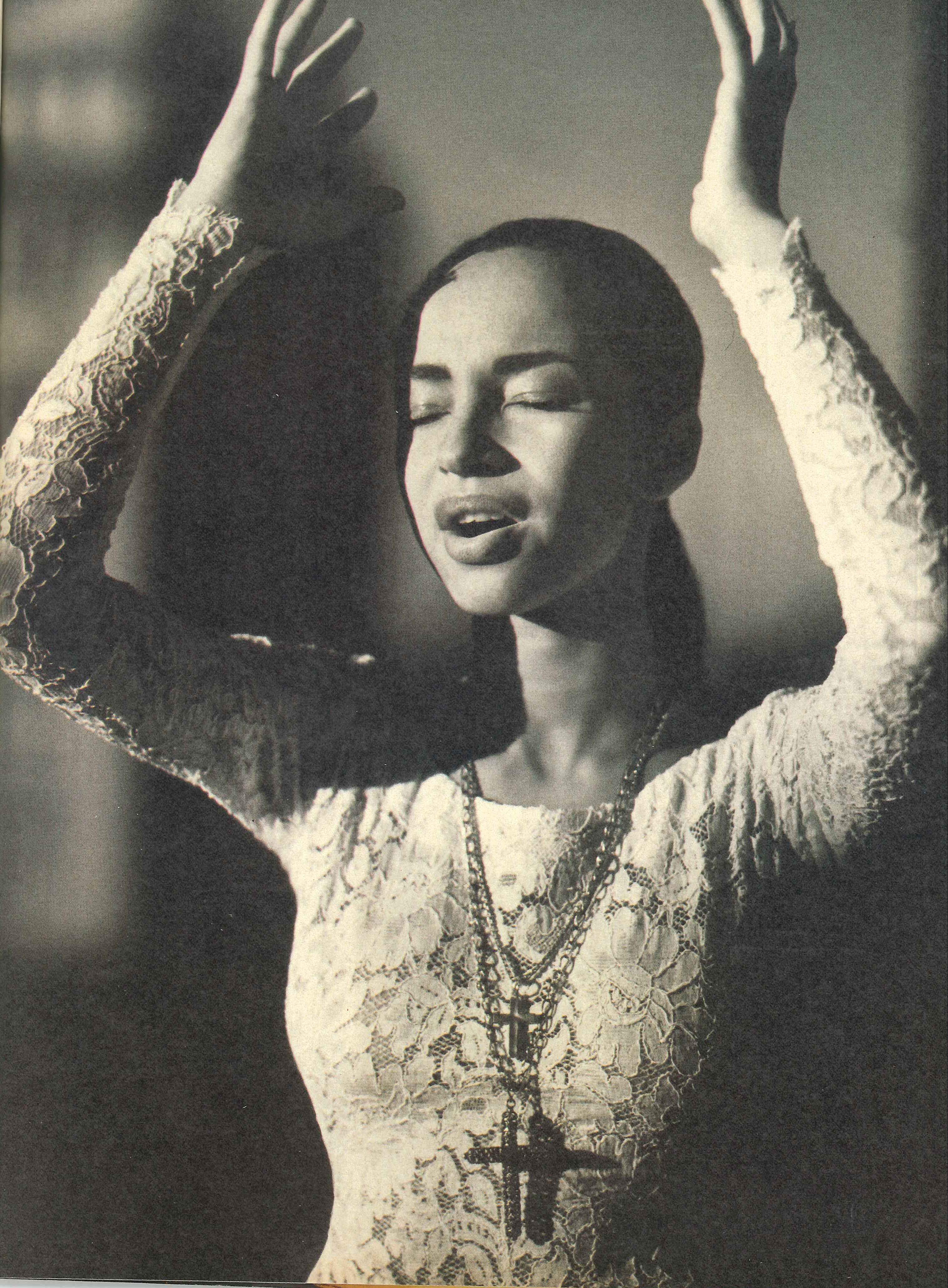 ALETTI: In some of your comments in other interviews, you seem to object to being typed as a cool fashion icon. Why does it bother you?

SADE: I don’t really like the fashion industry, to be honest with you. I don’t like the way it works, the way buyers have so much power over everything — who’s their darling this week and so forth. I think it’s far more cutthroat than the music business. I find it a bit distasteful and have never really been part of that.

ALETTI: But your image is very fashionable.

ALETTI: I was struck by what you were wearing onstage at Radio City Music Hall. Who does your clothes?

SADE: Gioia Meller Marcovicz. She’s German and has been making my clothes for about five years.

ALETTI: Tell me about what you were wearing at Radio City. It was a long-sleeved white tunic and it looked lacy…

SADE: It’s thick cotton lace with short trousers underneath. It’s the urban-princess look. [laughs] Gioia lives in Whitechapel in London, which is very Indian. We were just walking around the shops and looking for things, and we decided the look was “urban princess.” A very fashion term. ALETTI: You’re somewhat of a perfectionist about your music and tour performances, apparently. Do you think that’s helped you?

SADE: Perhaps it’s detrimental in a way. Somebody like Prince, for instance — I think he’s quite slapdash. He’s a bit like a bull—he goes in with his horns down and charges, but there’s a chance he’s going to hit the right spot. He produces a lot. I think much of what he does is quite trashy and don’t like it all, but every now and then he does something that is really genius. He’s very, very talented, but the most important thing about Prince is that he’s braver than a lot of other people. I don’t think I’m as brave as that. I may be too proud and scared of losing face, and maybe that does somewhat stifle what we do. Maybe I look too closely at what we do, and it’s not necessary to be that concerned. ALETTI: You’ve apparently been plagued by a lot of odd rumors.

SADE: Every time the press talked about me, the headlines were  Lovesick Sade, Sad, Sad, Sade, things like that. They would say, “Lovesick Sade is shut away in her penthouse flat,” as if I were Marie Antoinette; anyone would think I had a moat around my house. Then they said, “Lovesick Sade is having a glass window put above her bed so she can gaze at the stars in her lonely nights,” or something like that.

SADE: And they said that I was having a dance floor put in my living room. They think I’m Barry Manilow! [laughs]

ALETTI: They have some interesting ideas about you, at least. Why do you think all these rumors got started? Because you weren’t speaking to the press?

SADE: Partly, yes, because I didn’t do very much to counteract them. I suppose some people would do a TV interview or something and say that this was all nonsense, but I didn’t do any of that. ALETTI: Why don’t you  go out dancing as much as you’d like now? Don’t you have the freedom?

SADE: It’s because of my work as much as anything. If I go out dancing, that means I’ll probably drink. No, definitely. And there’s a possible, possible chance, slim though it may be, of having a hangover the next day, and if I have to perform, there’s a possibility that the performance won’t quite be, you know, there, and I’ll be struggling. There will always be certain places I can go and not be bothered because people would rather die than acknowledge my presence. [laughs] In London I usually go to the Wag. I would never go to the Limelight.