By Thom Bettridge and Mel Ottenberg Perhaps no characters in the history of television carried drama through their nails like the ladies of HBO’s The Sopranos. Whether it be an angrily-pointed claw, a sloping come-hither acrylic, or a set of French tips nervously twisting around a telephone cord, the nails shown in the six seasons of The Sopranos were their own expressive mood. The show’s manicurist, Maria Salandra, was responsible for developing these delicate subplots, often working until the wee hours of the night making extra press-ons for some of the show’s most violent scenes — a fact she recalls fondly. A card-carrying Jersey girl, Salandra brought her experience to ensure each of the subtle nail variations from mob wife to goomah to stripper were all deftly handled and true-to-life. In celebration of the 20th anniversary of The Sopranos’s premiere, she spoke with Interview’s Mel Ottenberg and Thom Bettridge about constructing nail looks for each character and the ever-evolving style choices of today’s Jersey girl.

OTTENBERG: Can you tell us about how you started out working on The Sopranos?

SALANDRA: All of my friends were in hair and makeup. They actually brought me in to the whole celebrity manicurist scene.  Kymbra Callaghan, Sharon Ilsen, and Colleen Callaghan —  all award-winning makeup and hair people. When they needed a manicurist, they’d call me. THOM BETTRIDGE: So how did you go about constructing the characters from a nails perspective? Let’s start with Carmela.

SALANDRA: I used to hang around with all these guys at the Mafia clubs here in Jersey, so I had a real idea of what the mob wife looked like. The first time I met Carmela — or Edie Falco — she had already heard that I intended to do a pink and white acrylic. In the 1990s, all I did was pink and white acrylic. That’s what all the housewives had. With Carmela, it became iconic. Edie really wasn’t Carmela until she put the nails on. She didn’t like having the acrylics on because she was so hands-on in her life. She had a place up in the mountains. The scenes were always so physical that she was breaking nails. For each of the show’s principals, I would have to make at least 10 to 15 sets, per design. For Carmela, I taught them how to do that, how to put it on right away. I would sit there for hours in my salon, easily until one o’clock in the morning making these nails. In fact, when my parents were really sick, I would take all of my stuff and sit in the lobby of Hackensack Hospital and do all the nails there. I had deadlines.

OTTENBERG: You’re right about how iconic those nails were. Carmela got a new haircut sometimes to try to change her life. Or she tried to therapeutically fix her problems with jewelry, but the nails were always the same. 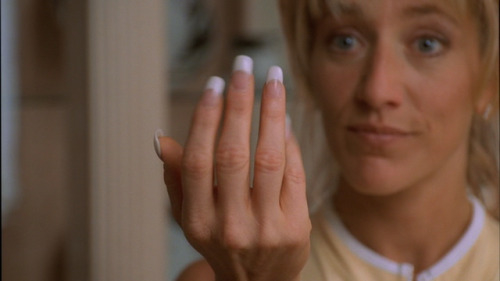 BETTRIDGE: They were the one constant.

OTTENBERG: Then we got Adriana.

SALANDRA: She’s the Jersey girl that I knew growing up: big hair, lots of makeup, longer and curvier nails. They weren’t straight looking, more professional — if a long nail could look professional.

SALANDRA: It couldn’t be over-over the top because it wouldn’t translate on camera. They just wanted it to be bright and sparkly. For Adriana, I did Louis Vuitton nails for her. I would cut up money and I put it into the design. I did all kinds of stuff for her. She just loved it. 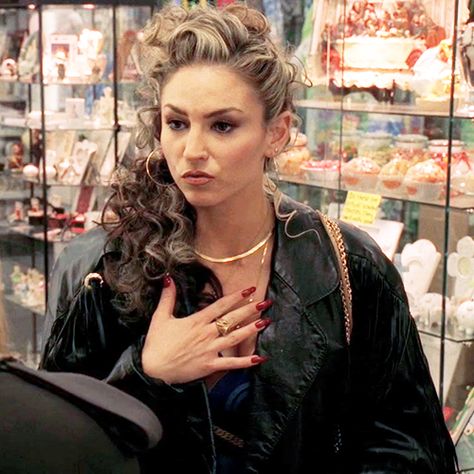 SALANDRA: She was just playing it short and corporate. I did a little milky pink on her. I did all the strippers, too.

OTTENBERG: Bada bing! When I re-watched it this time, I was like, “Man, Maria did nails for every single person.”

SALANDRA: Every single one. 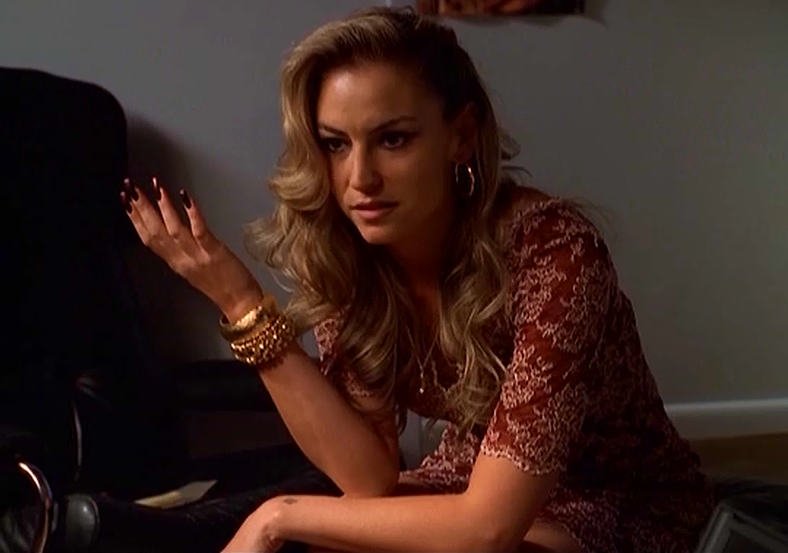 BETTRIDGE: What’s the difference between an Adriana nail and a stripper nail? What takes it into stripper zone?

SALANDRA: The stripper nails are even longer. They could be over the top. They’re longer and curvy, really curvy.

OTTENBERG: Who was that one stripper who was Ralphie’s girl? She’s so good. When you watch the show again, that whole arc is so insane when he kills her in the parking lot!

SALANDRA: Is that the one with the braces? My father did those braces.

SALANDRA: He would do that a lot for them. Any time there was a broken jaw, he wired somebody’s jaw shut. If they needed chipped teeth, broken teeth, he would do that too.

“Edie really wasn’t Carmela until she put the nails on.” — MARIA SALANDRA

OTTENBERG: When you were working on the pilot, did it feel like a monumental thing?

SALANDRA: Absolutely. When I heard what this was going to be, and the fact that it was taking place here in Jersey, I knew it had to be amazing because I knew these guys.

BETTRIDGE: Do people from Jersey feel like it’s true to life?

SALANDRA: It was as close to home as it could be. I felt, though, that towards the end, it started to get a little out there with their storylines. They were pushing it a little bit.

SALANDRA: I know Big Ange’s her sister, as things happen. I’d look at her thinking, “This is what they look like now!” It’s the same thing, scoop neck, always the tips, and boobs showing in some way. Now, they have bigger hips than they did before because they’re sculpted and toned from the doctor. Big lips. Still lots of black eyeliner.

BETTRIDGE: Would the Carmela of today still have a French tip?

SALANDRA: Definitely. But I think that Carmela would be more label conscious now.

OTTENBERG: Totally. The bag would matter a lot more.

SALANDRA: She’d be a little more refined, I think, but still on the edge of trash.

SALANDRA: To be a part of it was surreal.