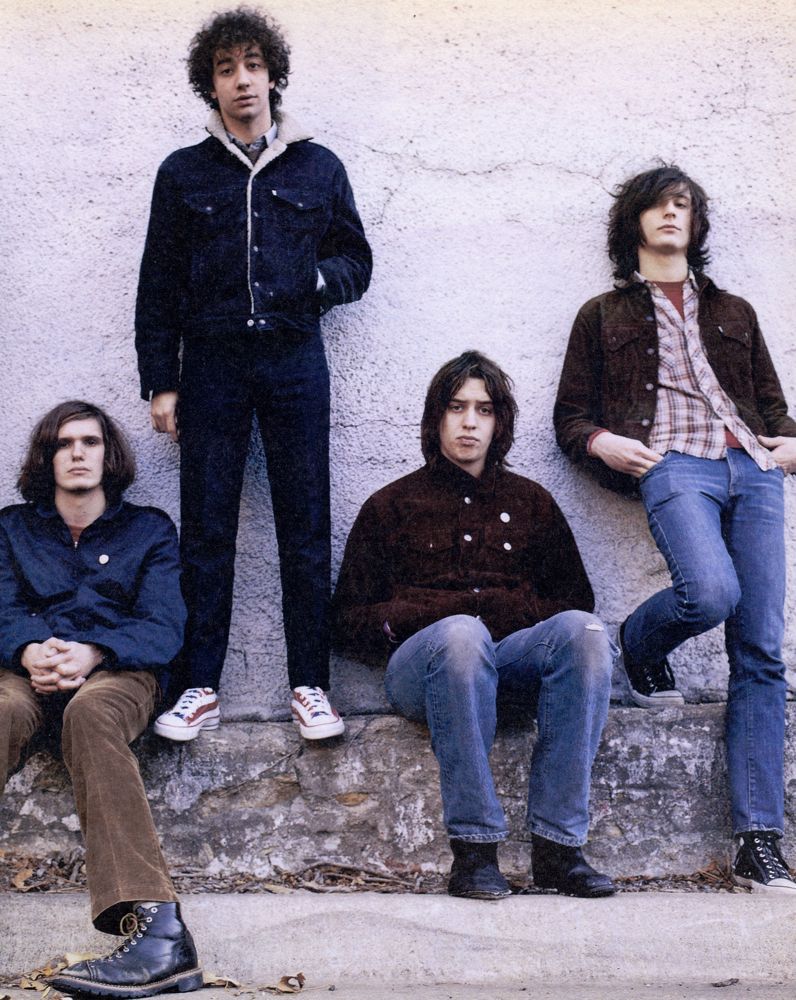 In October of 2001, five guys from New York collectively known as The Strokes released their debut album: Is This It. They’d met through various schools in New York (and one Swiss boarding school) throughout the ’90s and had self-released one EP earlier in the year.  Their success was immediate and deserved; from “Soma” to “Barely Legal” to the album’s lead single “Last Nite,” there are no filler tracks on Is This It. While a few music trends from the early aughts are cycling back into fashion (see: cheesy R&B), Is This It never fell out of fashion. Along with only a very small handful of musical artists such as The Smiths, The Velvet Underground, Prince, Bowie, and Nirvana, The Strokes have never not been cool. Yes, over the last decade, they’ve made some mediocre music and had some public periods of estrangement, but none of that has diminished the appeal of their debut.

The Strokes fifth album, Comedown Machine, came out last year. They have not played a live show in the US, however, since 2011. This is about to change. Yesterday, the band announced a May 31 concert in Port Chester, New York. Come June, they’ll headline Governor’s Ball alongside Outkast, Jack White, and Vampire Weekend. And if Albert Hammond, Jr. has anything to do with it, the quintet will release a sixth album next year.

In celebration of their return, we’ve reprinted our first interaction with the band. For our March 2002 issue—which featured Thora Birch on the cover in a leopard print, plunging, swimsuit-scarf concoction—Blondie’s Debbie Harry interviewed frontman Julian Casablancas. Sandwiched between Jena Malone and Halle Berry, it was Casablancas’ first appearance in Interview. Casablancas’ father, however, Elite model founder John Casablancas, had appeared in our September 1977 edition a year before Julian’s birth.  —Emma Brown

The Strokes
By Debbie Harry

They’ve got people yelling about rock-‘n’-roll all over again.

DEBBIE HARRY:  When I read your press kit, I came away thinking, I wonder what it feels like to be looked at as “the next big thing”?

JULIAN CASABLANCAS: It’s exciting. It’s like what you always hope for but never really thought you could come close to. I remember when we started out, if we had a paragraph written about us, we’d throw a party and show all our friends!

HARRY: [laughs] Get tattoos, everything!

HARRY: Well, I guess once you’ve said what you have to say you really don’t have to read it again. I always found it sort of disturbing to read stuff while I was doing shows—all of a sudden the things I’d read would flash in front of my face in the middle of a song and I’d forget where I was, and go [Harry gasps]. Like shock therapy.

CASABLANCAS: I really like your live stuff, I gotta say.

HARRY: Thank you. I think your CD is really good, too, but I haven’t heard the EP, the first thing that you put out.

CASABLANCAS: Oh, the demo. We did it for real cheap, just three songs. It was just a demo to get bigger shows in, like, Philly.

HARRY: But it got released?

CASABLANCAS: Yeah, it got released.

HARRY: Did you make money from it?

CASABLANCAS: I don’t think so, no.

HARRY: How many do you think they sold?

HARRY: You should get some money from that. You signed a contract for that, right?

HARRY: Who’s your manager?! Tell him to call me up. Just kidding. What’s the largest place you’ve ever played?

CASABLANCAS: The Reading Festival in England. I think there were 40,000 or something.

HARRY: And how did that fell?

CASABLANCAS: Uh, scary. I puked right before we went onstage. It was one of those shows. I mean, it was really weird, but actually fun in hindsight. It’s funny, I was taking a guitar lesson today, we were going over some jazz stuff, and the teacher was telling me you did some jazz stuff over the last few years.

HARRY: Oh yeah, I’ve been doing it for six or seven years.

CASABLANCAS: I mean, I know there’s the Jazz Passengers and James Chance things, but I don’t know if you guys still do stuff.

HARRY: Every once in awhile, I sit with them or do a show. Wait a minute. I have to ask you questions!

HARRY: Do you live with somebody?

CASABLANCAS: Yes, but it’s like we have two studios attached by a kitchen. Albert, the guitarist, lives in the other studio.

HARRY: Sounds good. Where is that, in Manhattan?

CASABLANCAS: Well, I always joke around that if we ever made enough money to buy a new car, I’d probably buy an Acura. A black sports car.

HARRY: Have you ever met Lou Reed?

CASABLANCAS: Well, I met Lou Reed but I met him as, like, a pesky person.

CASABLANCAS: That’s how I felt. You know, he gives you that look of death.

HARRY: I don’t think he means it that way. I think the muscles in his face are just always very relaxed, and you know how it is when you’re really relaxed, your face looks kind of serious, right? I don’t know.

CASABLANCAS: Are you friends with him?

HARRY: I’m not really friends, but we’re acquaintances in a nice way, and I’ve seen him over the years. I like him. I think he’s great. Now listen, stop asking me questions! Have you ever met David Byrne?

HARRY: These are stupid pop-question questions, but I thought I’d throw them in just to be annoying. Are you single?

HARRY: You have a girlfriend.

HARRY: Okay. Who cuts your hair?

HARRY: Okay, do you have any pets?

CASABLANCAS: Albert has a cat.

HARRY: Are you a cat or dog person?

CASABLANCAS: Depends on the animal. [laughs] Some cats are cooler than some dogs.

HARRY: At this stage in the game, are you really happy when someone recognizes you?

CASABLANCAS: It doesn’t really happen so much, but yeah.

HARRY: If you continue with this and your career builds, do you think you’ll feel comfortable being famous and losing a certain degree of anonymity?

CASABLANCAS: I don’t know. The only thing I’m slightly worried about is if we get to a level where we’re constantly busy and we don’t have enough time to focus just on the music.

HARRY: How will you schedule your time? Do you have any kind of vision for that?

CASABLANCAS: No. Pretty much the only goal I’ve had since the beginning, which I still have, is just to get better, work hard, focus, and everything else will just be a bonus. As long as I’m satisfied, and I think we’re getting better with every song compared to the last, then I’m satisfied and that’s all I want. If we don’t achieve that, then I’ll be disappointed. But if I think we’re still doing stuff that’s good, and we’re not as popular anymore, or people don’t write about us, I’d be just as happy. Did you get recognized on your way over here?

HARRY: What was it like living in Switzerland? I’m really fascinated with that.

CASABLANCAS: It wasn’t that cool.

HARRY: What city was it?

CASABLANCAS: It wasn’t a city. It  was a small town about an hour away from Geneva.

HARRY: Yeah, they look good. At first I thought they were canvas wrapped in cellophane. You wear socks, right? Okay, that’s cool.

CASABLANCAS: That’s an odd question: “Do you wear socks?”

HARRY: Yeah. It’s an important question. Now, what is the thread between you and your fellow musicians? Outside of music, is there a unifying force?

CASABLANCAS: Uh, no. The drummer is into sculpture, but our main thing in common is music.

HARRY: How do you feel about politics?

HARRY: Are you more concerned with humanitarian issues, or environment problems or stuff like that?

CASABLANCAS: Well, I mean, I wouldn’t say that either. The only goal right now that I can have, the only thing I can offer right now, is the need to get good at music, do something with quality.

HARRY: Do you think you will be satisfied?

CASABLANCAS: I think you can get closer but you never fully arrive.

HARRY: At night when you’re sleeping, do you have dreams?

CASABLANCAS: It’s funny you ask, because last night I had this dream I was playing a show at my old high school, and then, at the end of my dream, I spit. [laughs] I just remember that spitting feeling, an intense spit, and I woke up and I had actually spit on my covers.

HARRY: [laughs] Do you ever put any of your dreams into writing?

CASABLANCAS: Not directly but I’m sure subconsciously.

HARRY: If you were to wear a particular item of women’s clothing, what would that be?

HARRY: No, I mean, would it be a pair of shoes, secret underwear, an earring, or a shirt that was made of lace?

HARRY: Have you ever had the drive to do that?

CASABLANCAS: Not on purpose. I think sometimes I’ve run out of underwear and borrowed my girlfriend’s pair. [laughs] I’ve done that once or twice.

CASABLANCAS: Well, it wasn’t for, like, any kind of sensation other than having underwear on. [laughs]

HARRY: Is there anything you’d like to say to people?

CASABLANCAS: I don’t know. It’s weird: I remember I would be in the shower and I would interview myself, you know. I think everyone does that.

CASABLANCAS: And I would give really intellectual answers that solved all these problem, like, as soon as someone asks me a question they’ll see what’s comin’ their way! I’ve got all the answers. [laughs] And ever since then, it’s all been downhill.

THIS ARTICLE INTIALLY APPEARED IN THE MARCH 2002 ISSUE OF INTERVIEW.