The Ignacio Mattos Guide to Salt-Baking a Giant Fish 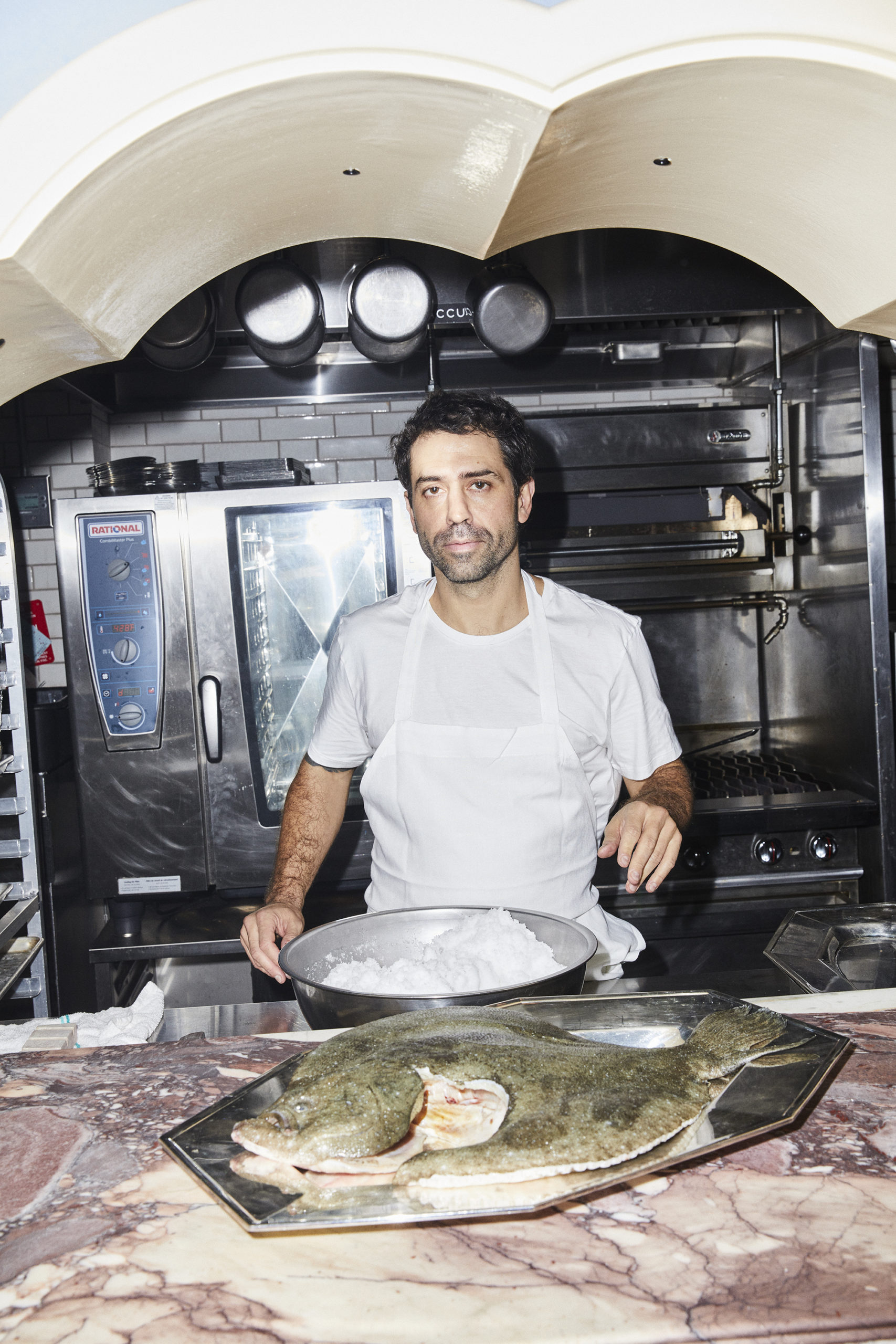 If you’ve dined out in New York City over the past decade, you’re probably familiar with Uruguayan-born chef Ignacio Mattos. His distinct but simple blend of Spanish, Italian, and Middle Eastern flavors at restaurants like Estela, Altro Paradiso, and Lodi, are effortlessly stylish, elegantly understated, and most of all, delicious. He made endive salads cool. For his next act, Mattos is opening Amado Grill, an opulent fine-dining restaurant at Nine Orchard, downtown’s most gossiped about hotel, where Mattos also runs the scene-iest tavern in town, Corner Bar. I don’t cook, and never will, but if I got a wild hair, Mattos’s recipe for salt-baked fish would be at the top of my list.—CHRIS BLACK About 20 years ago, when I was working with the chef Francis Mallmann, we were cooking for a group of princes and a bunch of other bigwigs on a mountaintop and orchard field near Mendoza. The setup was primal and beautiful—just two sheets of metal balanced over rocks. I’d never salt-baked a fish on an open fire before, let alone at high altitude. So I asked Francis how long he thought it would take. He had no idea. The giant salmon turned out pretty good. Luckily, everyone’s a bit more forgiving when you’re cooking over fire.

People get spooked by cooking whole fish, but it’s straightforward. A salt bake is a fairly common preparation for smaller fish like dorade, but when you cover a big fish in a mountain of salt and bury oyster shells into the crust it becomes a dramatic and celebratory dish. I’m using a six-pound turbot. Turbot is rich, dense, and very elegant, particularly when you get close to the bone and the fins.

To start, rinse the fish under cold water and pat dry. Then shuck 26 Kumamoto oysters, preserving the liquid. Set aside the oyster meat (they’re going in the beurre blanc) and reserve the shells (they’re decorating the salt bake). Preheat the oven to 500°F then line a large metal tray or baking sheet. Double check that the fish will fit on the tray and that the tray will fit in your oven. I’ve made that mistake before. If you’re feeling adventurous, cook the fish over fire.

Then, make the salt crust. In a medium mixing bowl, combine seven egg whites and whisk until they’re a bit foamy. In a separate large mixing bowl, place nine pounds of Diamond Crystal kosher salt then add the frothy egg whites and about one quart of water. Mix until the salt mixture is sticky and malleable, like the consistency of Play-Doh. While the fish is in the oven, make a beurre blanc. Dice three or four shallots and cube two sticks of butter. In a small pan over medium heat, add a few cubes of butter. Sweat the shallots in the butter with a bay leaf, mixing with a spoon to make sure the shallots don’t get much color. Deglaze the pan with about 3/4 cup white wine. As soon as the alcohol evaporates, add the same amount of white wine vinegar. Then slowly add the rest of the butter, stirring with a small whisk. Add the oyster meat and stir until the oysters plump a bit. Season with salt, remove from the heat and set aside. Very gently blanch a handful of sea beans. Shock the sea beans in hot water, transfer them to an ice bath, then stir them into the beurre blanc. Sea beans add an herbal texture and crunch.

Remove the fish from the oven and let it sit for another five minutes. After the fish has rested, bring your slightly browned masterpiece to the table for dramatic effect. Use a pair of spoons to carefully remove the toasted oyster shells from the salt. Then crack the salt crust and peel it off the turbot skin, being careful not to damage the meat. Don’t be afraid of making it messy. Scrape any salt residue away from the skin. Using a knife or a pair of shears, score the skin around the perimeter of the fish. Then, starting from the tail, peel the skin off the meat. Then use an offset spatula or a spoon to filet the fish (follow the spine). Be careful to protect the fins on the sides. Turbot has cartilage between its fins, which is the best part. You’ll eat them whole like pearls.