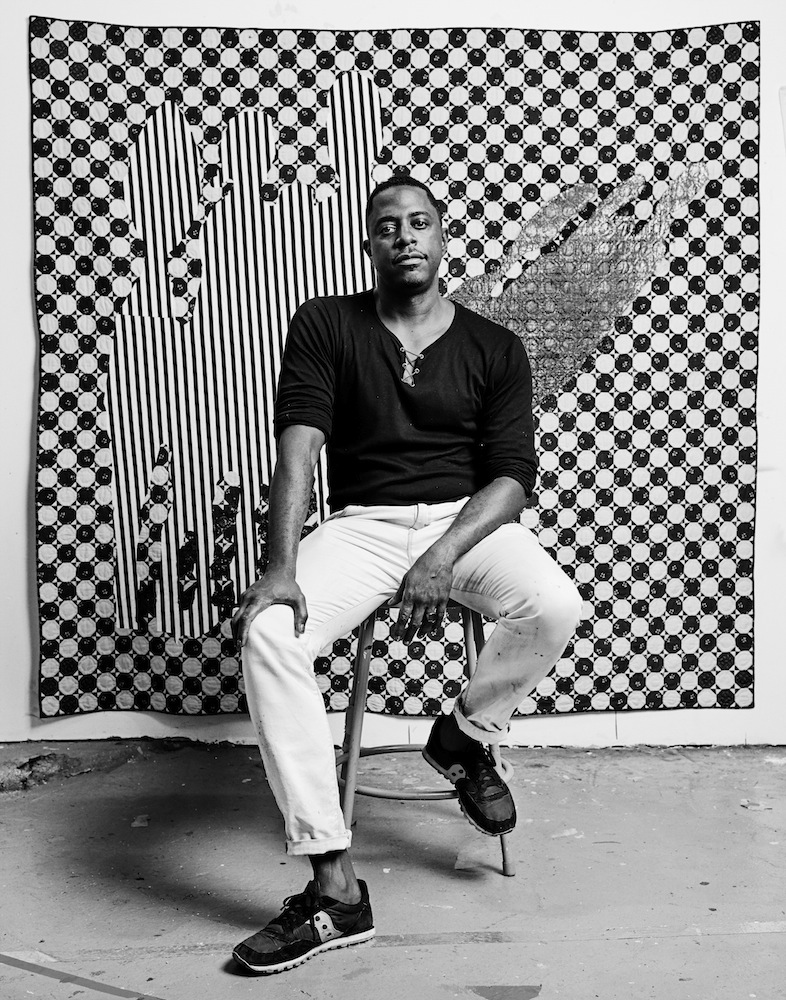 
“There’s no way you can make a huge, inflatable, dying Fat Albert and not expect some people to be offended,” Sanford Biggers tells us. As an interdisciplinary artist, Biggers has built a body of assertive body of work that doesn’t pull punches. Laocoön, his 10-foot-long Fat Albert inflatable, lays prostrate, its body moving in and out as it’s filled and deflated by an air pump. His “BAM” series, which includes a film and resultant sculptures, features African figures blistered, torn apart, and sculpted anew by bullets shot from a gun. Both conjure images of unarmed African Americans as the subject of physical violence. In addressing race, Biggers tackles American history, identity, and where we are (and aren’t) now. Viewing his work is an act of engagement and further, of implication.

Biggers’ quieter works are insistent, too. Lotus, a circular piece of glass etched with the image of a lotus flower, hangs in balance. The flower’s Buddhist symbolism is that of enlightenment, of rising, but Biggers’ lotus is constructed of drawings of an 18th century slave ship’s cargo container, lined with human bodies. His quilt drawings twist handmade blankets into canvases with shadowy figures, rain clouds, and vaudevillian smirks. Despite their content, these works are somehow peaceful, and unnerving in their stillness. This is, perhaps, due to Biggers’ approach, which he compares to completing a residency in a foreign country: “Embed yourself for a while and be quiet and listen.”

Biggers was born in Los Angeles, but has been based in New York since 1999. We visited him in his Harlem studio (not far from where he teaches at Columbia University) before he set out to Detroit, Michigan, where he will have a solo show at the Museum of Contemporary Art Detroit in September.

HALEY WEISS: I know one of the works that’s going to be at the Detroit show is the inflated Fat Albert sculpture, Laocoön. Do you remember when you first became aware of Fat Albert?

SANFORD BIGGERS: Yeah, absolutely. I grew up with Fat Albert, like many people of my generation. You know, I love the show, obviously, and probably around 10 or 12 years ago I had my sketchbook, just drawing, and had this idea that I was going to apply to a commission, and if awarded it my piece would be a large, inflatable Fat Albert that would be in Central Park, like it was walking, bobbing around. I didn’t get that commission and that piece was put on the backburner. I didn’t even know how to go about it at that time, it was just one of those ideas. Then, probably a year and a half ago—I mean, over the last six or seven years, probably longer than that, eight years or so—I’ve been working with African figures in various sculptural formats. So I’ll find a wooden sculpture from a flea market from an African shop—

WEISS: For the “BAM” series you did that, right?

BIGGERS: I did that for “BAM,” but before “BAM” I did a piece called Eclipse, which is actually upstairs, where I took an African sculpture and cut it in half, and I put the halves on two different pedestals at different heights. It created sort of an optical illusion, because you would see the full form on one side but then you would see this really abrupt, sliced, bisected side that would create this weird vibration optically as you looked at it. It looked like it was still whole but in fact, it was half.

Then the “BAM” series came out of that too, so I was back into the figure. I’ve had a very ambivalent relationship with the figure in my work, partly because I think every artist has a bit of autobiography in their work, and I find being an African American male, there are times when I end up being the piece, and people have a hard time getting past me to get to the work. So I’m very ambivalent about, even in performance, if the performance will be me. I usually have other people; I try not to put myself in that position. Even in my band [Moon Medicin], I wear a mask, so it’s really about sort of obscuring that sense of identity. But I also started to respond to a lot of the recent killings of black men, and thought it was time to go back into the figure in a more obvious way.

Although that triggered, no pun intended, me revisiting the figure, obviously those events have been happening for 500 years. I’ve been very aware of them for years and I myself have been held at gunpoint by police at least three times in my life, starting from the ’80s all the way up through the ’90s, and stopped and frisked on the streets of New York several times around my house near Columbia University, where I teach. There is a thing about being a black male in this society, and so it was a time to get back into it. As you can see here [gestures to the quilts on the wall in the studio], there are figurative elements that are sort of visible but invisible, like these figures are silhouetted and shadows but no direct depiction of a face.

That’s sort of where that came about and then Fat Albert, the Laocoön piece, was really when I was feeling a lot of anxiety and questioning basically how we, as black men, are going to survive in a society that is at this critical point where day by day by day we see our lives totally devalued. But also, going to an all black male college, and having a lot of very prominent, very well educated, and successful black men that are friends who are at risk the minute they walk out of their house … There are so many nuances to that story that still haven’t come out, but I think we’re finally at a point where we’re getting to the nuances, and that we have a language, and people’s ears are a little more open to hearing it because we’re no longer crying wolf. Before cell phones capturing all of these incidents, we were crying wolf, no one believed it, it was easy to dismiss it as, “Oh, you guys are being paranoid.” Now it’s right in your face. And the Laocoön piece sort of dealt a bit with that, but it also dealt with the character assassination of Bill Cosby, who was this big icon growing up and somehow represented by Fat Albert. I wasn’t making a statement about whether he’s guilty or not—that’s sort of larger than my knowledge, it’s obviously very complicated, and not a good situation—but I felt like there was a lot of loss, and I felt like black men as a whole in America were at this real state of limbo, and it was represented by all of these events, so it was all sort of conflated into this piece.

WEISS: You’ve said that your two materials are dialog and history. Do you see your role as an artist as initiating that dialog through your work? Does work have to be socially conscious to be of cultural value?

BIGGERS: No, I don’t think it has to be. In fact, I think my entire career over the last two decades has really been grappling with how much to give and how much to subvert, in terms of that dialog. I actually see my trajectory as an ongoing experiment with that, so when I say dialog is part of what I’m into as an artist, that dialog also unfolds over time. Another way of looking at it is I think thematically, my work has been extremely consistent, it’s just finding different ways to talk about the subject because some things go over their heads, some things go under the radar, and some things hit you right in the face. I have bodies of work that do all of those.

WEISS: With the “BAM” pieces, you did not physically pull the trigger on the African sculptures. Is that something you knew you were not going to do, or did you choose in the moment?

BIGGERS: No, I thought I was going to do it. I’ve shot guns before and I thought, “Okay, well, this is just a way of sculpting,” so it was important for me to wield the tools. But when we set up the whole shoot, and we were about to do it, I was like, “You know what, I actually don’t want to do that.” I think somehow that implies me in the work in a way that I don’t want to be implied. Not only that, it feels like I’m shooting myself, like some type of effigy of myself or one of my friends. So my cameraman pulled the trigger.

WEISS: Have you always been this interdisciplinary?

BIGGERS: Forever. I was chastised by professors when I was in college saying, “You have to make a decision. You can’t be a painter and a sculptor and you definitely can’t be a painter, sculptor, and a musician.” I knew right there that that was total bullshit. Come to find out, that same professor said it because they were always sitting around playing guitar and writing songs, but they never thought they could do it because they were so invested in being what they consider a sculptor. I think it’s a generational slip on how an artist can live in the world. So, by nature, I’m an interdisciplinary artist.

WEISS: Talking about history, you were saying how obviously this violence has been happening for decades, this maltreatment of black men and black people generally has been happening for such a long time, but it’s now really in the national consciousness with Black Lives Matter, all of these shootings being on tape, and outrage over the cops not being—

WEISS: Yes. Since this has happened and these videos are out there, have people reacted differently to your works than they did prior to that?

BIGGERS: Yeah, I think so, and that’s a really strange thing. I’ve always thought about that, far before this sort of convergence of social zeitgeist and my work, that artworks can change meaning over time. They’re not fixed. I often say time is malleable, but the reception of an artwork is malleable too. When the culture changes, the view and the way you see that work, your perspective, changes. It’s something that you can’t control. It’s sort of daunting and intimidating, but at the same time very fascinating, extremely fascinating.

FOR MORE ON SANFORD BIGGERS, VISIT HIS WEBSITE. “SUBJECTIVE COSMOLOGY” AT THE MUSEUM OF CONTEMPORARY ART DETROIT OPENS ON SEPTEMBER 9, 2016.