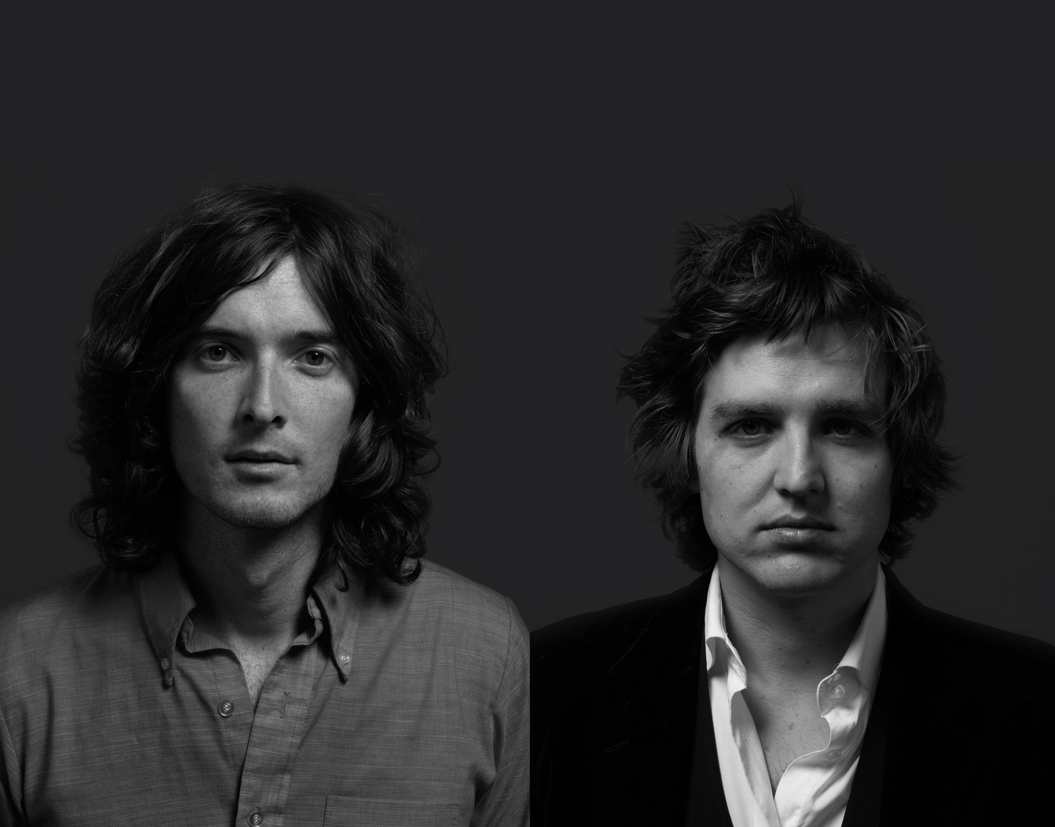 ABOVE: THE MILK CARTON KIDS

The Milk Carton Kids sound timeless. On initial listen, disregarding the clean production, one might assume this is music made at any point in Americana history—possibly during the folk heyday of the 1960s. The themes are Woody Guthrie timeless, and the obvious musical influences point to the golden, two-part harmonies of Simon and Garfunkel, with only the sparse accompaniment of delicate fingerpicking.

Though they’ve been together barely two years, bandmates Joey Ryan and Kenneth Pattengale have already won over Gus Van Sant (who featured three Milk Carton Kids songs in hisfracking drama Promised Land); and with the release of their upcoming Anti-Records debut The Ash & Clay (March 26), they belie their age and sound like lifers.

FIRST ENCOUNTERS: Ryan: We were both unsuccessfully pursuing solo careers while playing at the same LA clubs. I saw Kenneth performing and introduced myself because I liked his song that was told from the perspective of a dead or dying dog.

Pattengale: The dog is dead. It’s a posthumous dog.

Ryan: The dog is somehow singing posthumously. It’s already dead, and yet somehow able to sing. You have to suspend some disbelief in the first place.

Pattengale: That’s the beauty of songwriting.

Ryan: As far as what’s kept us together…

FRIENDSHIP: Ryan: I think we’ve become more like family, after spending the last two years rarely more than several feet away from each other. We write songs together, we perform together, we run a business together. We have basically a functioning record label together. I’m married, but I spend a lot less time with my wife than I do with Kenneth.

Pattengale: For me, it’s probably a healthy thing. I’m a pretty insular person, so I don’t have a grand need to call my parents daily. My poor older brother, who I love dearly, I talk to him once every month, if that. There’s a side to all of that that’s dysfunctional emotionally. But what Joe just described, as far as our working relationship, and what we’ve spent a number of years building, is probably quite healthy for me. He’s the kind of person I don’t have to twist my own arm every day to talk to.

THE THEMES OF THE ASH & CLAY: Pattengale: The way that we focused the stories, settings and scenes of these songs calls to attention the darker side of a dying America. That said, I learned my lesson a long time ago to never write a lamenting song that doesn’t provide some kind of hope or has salvation. Because those songs are fuckin’ bummers. I’ve written a number of them, and they were all bummers. I think as I’ve grown as a musician and writer, but moreso as a listener, what I find meaning in are the people who can paint a picture that’s quite realistic and not necessarily easy to look at, but provides a semblance of constructive thought as to “How the hell do we get out of here?”

FINDING THE PROMISED LAND: Pattengale: Gus Van Sant found us at a show. Like all of the good things that come to us, it seems to happen when we’re actually just doing the job we signed up for. One night we found ourselves two hours into a conversation with Gus Van Sant, who we’d never met before. I don’t think Joey knew who he was the first hour, or didn’t recognize him.

Ryan: That’s not true. To be fair, I didn’t know who he was until he introduced himself as Gus. I didn’t recognize his face. Luckily, that was earlier on than an hour.

Pattengale: I’m taking a jab at Joe because it was somehow irrelevant to the conversation we found ourselves in over the course of a few hours.

Ryan: We weren’t talking about him being Gus Van Sant.

Pattengale: He wasn’t talking about what he does, and we weren’t talking about what we do. I think after he saw us play it was very clear that there was something we offered to the world that he responded to, and enough so for him to be compelled to have a conversation with us and take interest in us as human beings. We had this really terrific conversation, and I don’t think he even made any mention of Promised Land.

Ryan: Not until the end, when he said “I’m working on this movie and I think you guys would be great for it.” And we said, “Okay.”

Pattengale: After that conversation, the trail went dead for awhile. I took it upon myself to try and track it down to really no avail. A few months after that, a random phone call appeared, and very quickly we were having a second conversation with him that lasted a few hours, but this one took to the topic of trying to figure out how to shed some light on his film via song. That was a real thrill.

Ryan: That was in the studio, where he and the music supervisor were looking at songs for different scenes. They had temped in a bunch of Bruce Springsteen songs. He said “What do you guys think about this [Springsteen]?” And we were like “Eh, I don’t think so. How about ours instead?” He said “Yeah, that’s okay. Why don’t you try writing some stuff, too.” We got a series of surreal emails after we had written and sent him a bunch of things. The music supervisor wrote, “Yeah, looks like you guys are good, as long as Bruce Springsteen or Wilco don’t beat you out. Looks like your songs are gonna be it.” At that point we thought it was done, because clearly they’d choose Springsteen over us.

PEER GROUPS AND OLD SOULS: Ryan: I just feel old. [laughs] My body’s catching up to my soul.

Pattengale: I can relate. At the same time, at the risk of sounding like a complete arrogant asshole, which incidentally I am, I find myself very critical of what people our age do in this field. The thing I cherish more than anything else is originality. There’s all kinds of young people making all kinds of original music, but it’s definitely not in the genre of songwriting. It’s definitely not in the genre of folk or Americana music. There’s 30-year-olds doing some pretty wild and important stuff musically, but it’s not in the company we keep. I’m very frustrated about that. I think many people are fooled thinking they’re doing original work in that vein today. But to be labeled an old soul, I don’t know if that’s quite right. If I were to accept the label, I’d think that it was appropriate only describing a need to go above and beyond what I feel like people have settled for in the job that most resembles ours currently.

THOUGHTS ON THE FOLK REVIVAL MOVEMENT IN POP: Pattengale: We’re incredibly resentful. [laughs] At some point they’re gonna run out of kickdrums.

Ryan: We look at it skeptically. In giving a diplomatic answer, everybody can find fault with whatever particular bands they want, and like whatever bands they want. We see our jobs as being different from what they’re doing. What they’re doing essentially now is pop music, and pop music can come from any genre. You can have pop music that’s country, hip-hop, rock or whatever this folk movement is now. I don’t know what’s folk about them other than they play acoustic guitars. There’s nothing bad necessarily about pop music. Usually it’s defined by the broadness of the appeal. I guess the important thing is to hopefully not get distracted by the rich, long, and profound tradition that exists of songwriters and folk songwriters. With acoustic duos specifically, there’s a long history of people who do it just like us. What I’ll say about the “folk revival” is that it’s a misnomer, because there was never anything there that needed to be revived. It was there the whole time. Somebody made it extremely popular currently, so it’s as though it were a revival. But there was never a break in the chain. So when this thing that is being called the folk revival dies and goes away, it will continue to go on unbroken.

Pattengale: There’s some merit to it if you get really far away. We were out on tour with the Punch Brothers, who are a group of five people who might be some of the best living players on their respective instruments. For a young kid in America, banjo is not an easy thing to pick up and be interested in, and not get looked at funny by your friends. You can’t sit there and play Green Day songs on the banjo. That doesn’t work quite the way it does if you go and buy a really shitty Stratocaster from Guitar Center.  If Mumford and Sons are doing any good work, it’s putting ten more banjos in every Guitar Center across America.

Ryan: For those that I’ve been exposed to and really hit me, it’s Randy Newman and Paul Simon.

Pattengale: Those are not one person. Those are two different people.

Ryan: Well, you should hear their duo record.

THE MILK CARTON KIDS’ THE ASH & CLAY IS OUT MARCH 26. FOR MORE ON THE DUO, VISIT THEIR WEBSITE.