“Sometimes I think not being represented is better than being misrepresented. “ “Michael told me when you hear bad things about yourself, it’s no good crying about it. Just put it into your music—it’ll make you stronger.”

“I want to be a speed freak for a while. Is that a stupid thing to say?” It’s hard to imagine a world in which the legendary artist didn’t bring us “Kiss.”

30 years after “The Silence of the Lambs,” she’s aged like a nice Chianti. Revisiting the best moments from Sade’s 1988 Interview cover, where she opens up about her love for dancing, the tabloids, and going to the club. She’s been a wrestling manager, a geisha girl, and Ms. Magazine‘s Woman of the Year. She’s got a load of gold and platinum records and she’s got a diamond engagement ring. She’s for real. And she really talks like that, except sometimes she talks even more like that. You might have noticed that Janet Jackson has been pretty absent from the music scene in recent months—and with good reason: at the age of 50, Ms. Jackson is expecting her first child with her husband, Qatari businessman Wissam al Mana. Before next week’s release of The BFG, we decided to revisit an interview with a fresh-faced, longhaired Steven Spielberg from May 1977. 2016 is quickly becoming the worst year for the history of music. During July and August, New Yorkers of all ages can revisit the heartwarming melodies of golden-era Gene Kelly musicals from the ’40s and ’50s. We decided to do some revisiting, too; in this case, Gene Kelly’s February 1985 interview conducted by Margy Rochlin, in which Kelly discusses Prince, the romance of musicals, and—speaking of romance—the ladies. 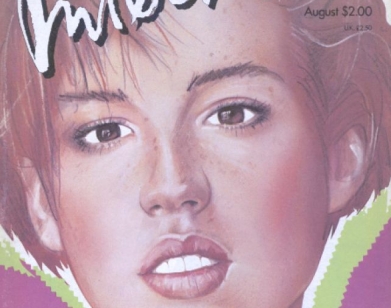 Molly Ringwald gave a voice to every awkward teenage girl from 1984 to… forever. From Sixteen Candles to The Breakfast Club to Pretty in Pink, Molly mapped out all the ups and down of teen life, and she did it with sincerity. Now, Ringwald is 44 years old, married with three kids, a published novelist, and set to develop a new show for Lifetime. 52 years ago on this leap-year day, the first ever Playboy club opened in Chicago. Whether you are fascinated, bored, amused or disgusted by Playboy‘s founder, Hugh Hefner, there is no denying his influence on 20th- and 21st-century Western culture, and many of the arguments made against Playboy in the ’60s and ’70s continue to dominate American political debates. “I like to make people happy. That’s what’s great about show business. It’s escapism. You pay your five bucks to get in and sit there and you’re in another world. Forget about the problems in the world. It’s wonderful. It’s entertaining. It’s magic.” Joan Didion Immerses Herself Into The Maelstrom

In 1983, Joan Didion travelled to El Salvador as a foreign correspondent and encountered the dark forces of political terror.