The story of two lovers from opposite sides of town, and a boy with fiery eyes and dreams no one could steal.

SAL, MID 20s LATINX with a James Dean swagger in a Pacino body, sits by the pool of the City Center hotel, pensive and demure.

He was waiting, as he often did on a Wednesday afternoon, for the sound of tires on gravel and the quiet SLAM of a too expensive convertible door in the parking lot behind him. Top from Palace. Pants by Marni.

A blood red convertible speeds through the parking lot with abandon before comfortably pulling into a spot without hesitation. In an instant the door opens and out steps REGINA, MID 20s WHITE a Lauren Bacall who grew up on Fassbinder.

She stomps from the car and pulls her scarf tight around her face. She’s obviously both familiar with the location and utterly disgusted by it. Coat by Prada. Scarf (worn on head) and Gloves from Palace. Sunglasses by Oliver Peoples. Ring by Bvlgari. Boots by The Row. REGINA
(a la Betty Davis)
“What a dump”…

She makes her way towards the motel’s “porter”…a booth in a cement wall.

PORTER
(Off-screen)
Twice in a week? You can’t get enough.

REGINA
I have no idea what you’re talking about.

She places a two hundred dollar bill in front of him before backing away and looking around.

The porter chuckles before tossing her the key.

PORTER
I don’t have a clue either baby. Have a lovely afternoon. Top and Skirt by Dior. Scarf (worn on head) from Palace. Sunglasses by Oliver Peoples. Ring (worn on scarf) and Bag by Bvlgari. Tights by Falke. Boots by The Row. Regina enters the room, her fur coat falling from her shoulders and immediately shuts the blinds before reopening them to look at the street.

Before she can close them again the telephone begins to ring.

It’s much too loud. REGINA
(answering)
Hello? Sal? You know I don’t like this. The walls so thin it feels like every ear in the county will hear you whimper my name…

She hears a knock at the door. She looks over concerned.

Sal sits next to a hand made DO NOT DISTURB SIGN and begins knocking at the door. Top from Palace. Pants by The Row.

The door opens and he stands looking down at Regina with a mischievous smile. REGINA
Does Alison know you like it this dirty?

He pushes his way in.

The blinds still opening Sal begins to walk in closer to Regina who feigns fear but keeps giggling in spite of herself. SEBASTIAN WEARS: Pants by Balenciaga. Tank Top and Belt from Palace. Boots by Giuseppe Zanotti. RILEY WEARS: Coat by Prada. Scarf (worn on head) and gloves from Palace. Sunglasses by Oliver Peoples. Ring by Bvlgari. Boots by The Row.

REGINA
Oh he knows how dirty his gal is.

SAL
He knows she likes unwashed sheets? And swimming in pools with needles?

Regina picks up the phone and lies on the bed. Sal stands over her. REGINA
Should I call and ask?

SAL
How crazy are you?

She begins to dial a number. Sal lights a cigarette and begins to laugh.

SAL
This ain’t how I thought this movie would play out. Hey Frank? It’s your missus. I’m calling to tell you I’m at a motel in the center of the city. Sal is standing right beside me. And I’m gonna make him go wild and crazy for my body for a few hours in this room. Till he’s sweaty and hot and can’t take it anymore. Then I’m gonan fuck him and come home to make dinner for you. Love you baby.

She hangs up the phone.

The CAMERA FINDS OUR COUPLE ON A BALCONY STARING OUT, PICTURESQUE.

We slowly ZOOM in.

SAL
(VOICE OVER)
Regina was the best time. None better. We composed symphonies out of the squeaks of mattresses and the screams of metal bed frames. She liked me dirty and I liked her crazy. Wild. Unfettered. Like a pig. REGINA AND SAL lie on a couch lazy in each other’s arms, drunk on pheromones and lust. REGINA
Lick my toes…but only the ones that smell.

Sal smiles and begins to take off her shoe slowly. REGINA (CONT’D)
But do it like Brando did it in that one movie.

Regina lights a cigarette and falls back. Suddenly a shadow passes by the window. But no one notices. Dress and Boots by Bottega Veneta. Earrings (worn throughout) Riley’s Own.

FRANK, LATE 20s a Steve McQueen stuck with a John Wayne glare, is staring at them from outside the window as they lie together pre-coital…

Sal and Regina look over to the window.

FRANK
You said he’d be sweaty and hot. He look pretty dry, pretty cool to me.

Sal looks to Regina who just reaches over and picks a cigarette before lighting it.

SAL
You crazy bitch. You actually called him?

REGINA
You told me to…who’s crazier?

The three stand outside. REGINA
It’s not hard to see where this is gonna go.

She moves her hands across Frank’s belt.

FRANK
Honey if it’s hard you’re looking for you won’t find it here.

Regina reaches over and touches his lips before shaking her head. 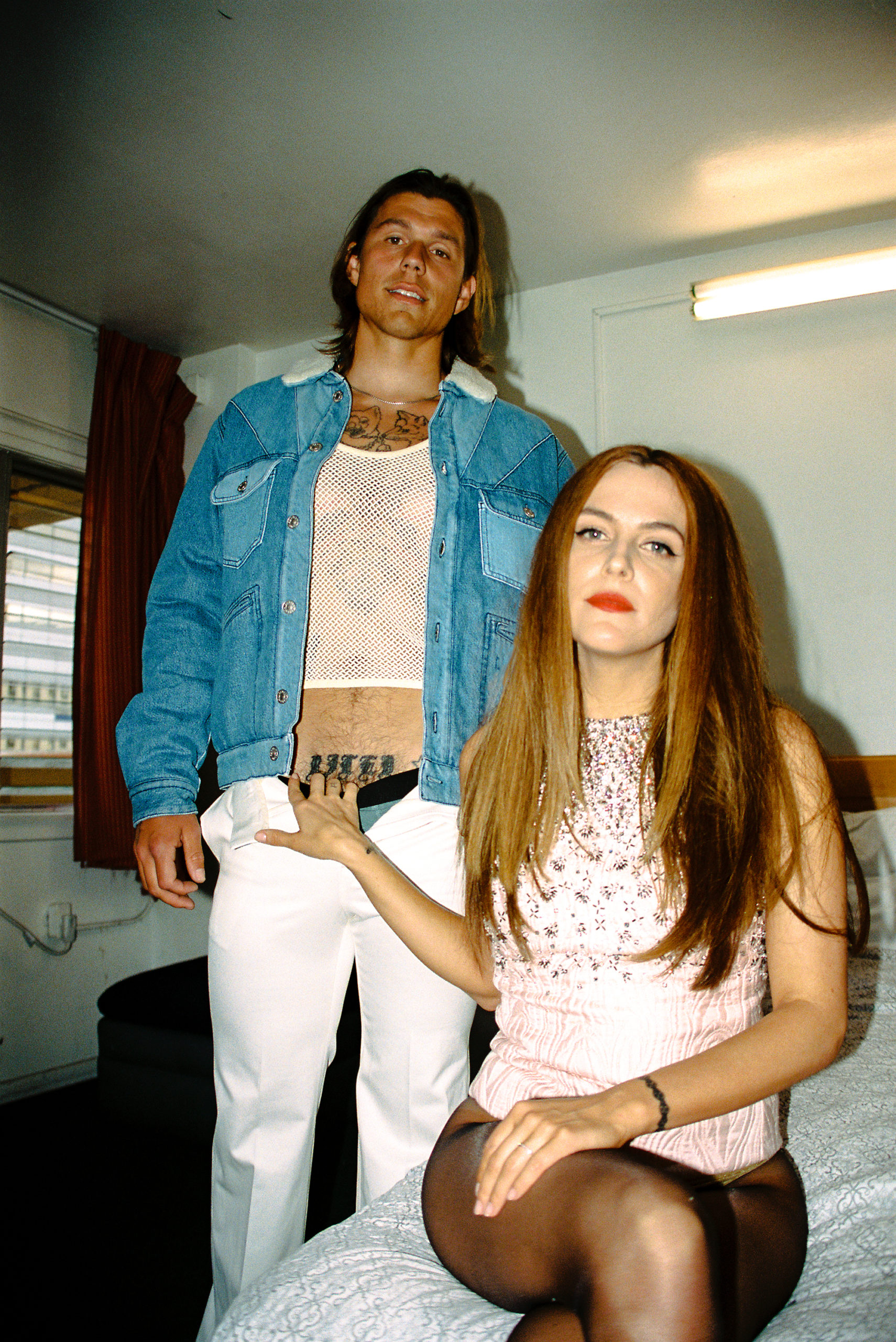 REGINA
(to Frank then Sal)
Look in my eyes. Both of you. Shorts by Gucci. Briefs by Supreme.

Regina reaches to one, places her hand on his cheek. Then the other. Before:

In the same outfit Regina lies upon the bed phone in her lap, Sal above her…

REGINA (CONT’D)
Does Alison know you like it this dirty?

REGINA
Should I call and ask?

She looks into the camera then picks up the phone.