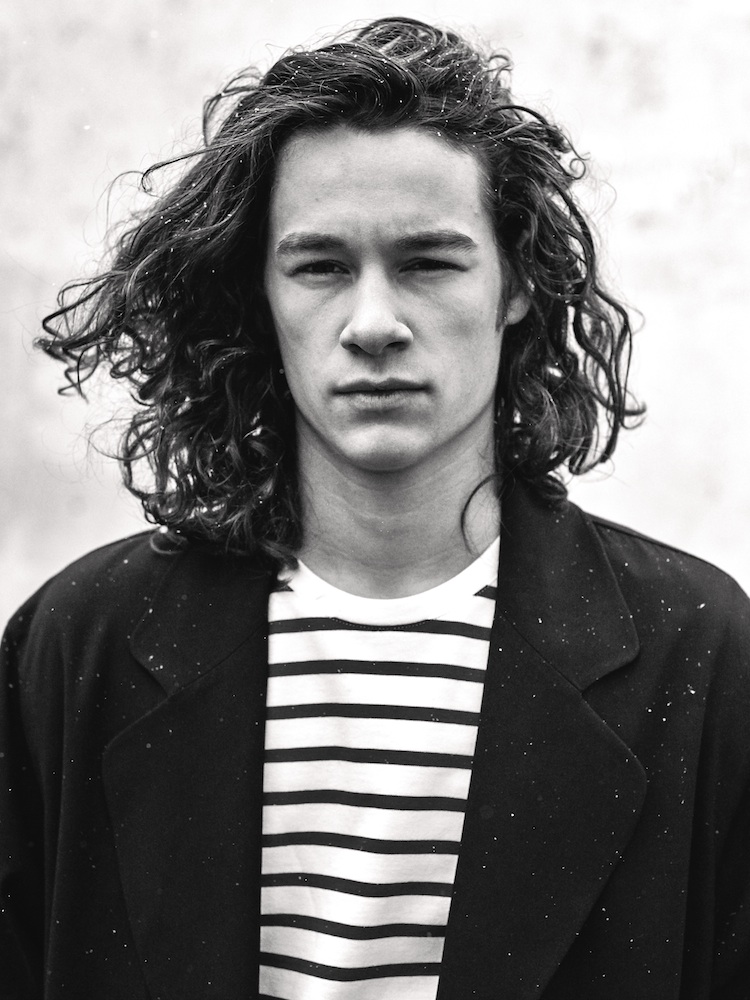 Kyle Allen knows how to tell a story. Ask him, for example, about the rap music video he filmed for Master P and he’ll bring you into the moment with his on-the-nose descriptions: “Master P shows up in the Porsche of all Porsches, and this guy is a giant—he’s the Nordic god of the rap kingdom,” the 21-year-old California native says. “He stands there and emanates hip-hop. He had glasses that should be on display next to the crown jewels. They had gold engraving and little rubies encrusted. He had on a satin do-rag and his hat had a gold plate on it on it. His shoes were alligator and had gold toes. He was wearing a suit jacket that was ivory with gold buttons, and his belt buckle was like something out of Indiana Jones, but it wasn’t a prop; it was real. He had two grills, one silver and diamond-studded and the other gold and diamond-studded.”

This week, Allen will make his television debut as a series regular in Hulu’s The Path. Starring Michelle Monaghan, Aaron Paul, Hugh Dancy, and Emma Greenwell, The Path centers around a cult—or “movement,” as the members would say—called Meyerism. Monaghan and Paul play husband and wife Eddie and Sarah Lane, with Allen as their 15-year-old son Hawk. Sarah was born into the movement; Eddie joined as a young man after a troubled adolescence. Then, several things happen at once: a new leader, Cal (Dancy), tries to bring the movement into the public eye, Eddie begins having doubts about his faith, and Hawk meets a girl outside the movement at his high school. “I was kind of floored by how easily the character came to me and how well I understood him,” Allen recalls. “I was almost second guessing myself because it came so easily.”

After studying acrobatics and ballet throughout his youth, Allen first became interested in acting via improv. “I started taking classes with Lauren Patrice Nadler,” he explains. “I lived at her studio. I went to every improv I could, and the classes I wasn’t in, I asked if I could watch them. I read everyone’s scripts. I knew everyone’s lines. I just saturated myself in it. I dedicated the same amount of energy I used to dedicate to ballet,” he continues.

FLYING THROUGH THE AIR: I was an acrobat. I did sports acrobatics for six years and then classical ballet for five. I was a rambunctious child. They happened to have a gym in our town and they enrolled me and my sister in acrobatics. We loved it, so we did it every single day. We were in morning and afternoon practices and competing all over the country. I was on the Junior Olympic National Team for a year. Then I didn’t have anyone to work with. It’s not a very popular sport, but it’s a team sport—you need at least two people. My sister and I were both “flyers”—we called them “tops”—so we couldn’t work together. Once you get to a higher level, partners are harder and harder to find. That’s when I started doing hip-hop and breakdancing and, oddly enough, ballet. I was about 12. My sister recently stopped. She’s actually a two-time world champion. She’s two years older than I am.

BALLET ACADEMY: I went to a boarding school called the Kirov Academy of Ballet in Washington, D.C. I was incredibly flexible and very coordinated from acrobatics. They figured they could mold me, because I was 13. I didn’t want to be a professional dancer; I just didn’t want to live at home anymore. I got it in my head: “I’m a man now, I’m 13! I can do whatever I want!” [laughs] I was an idiot. My second year there I decided that I really wanted to be a professional dancer. [Then I saw] Taras Domitro. He was in the San Francisco Ballet and they performed at the Kennedy Center. He was Mercutio in Romeo and Juliet. I was like, “If I can’t do that, I’m not going to be a ballet dancer.” I gave myself a year or two.

CHRISTOPHER: I had a metal bar in my chest. I named it Christopher. It started sticking out one side and you could kind of see it. I said it was my twin that was less fortunate than I was. I wasn’t really supposed to do that much, but I don’t listen to people often, so I was dancing as much as I possibly could with a metal bar fastened below my ribcage. It would swell and pop out on one side. At school, they all knew I had a metal bar in my chest so they’d come up to me and be like, “How’s Christopher?” And I’d be like, “He’s cooperating today.” It was more a preventative surgery. The way my chest cavity was developing, if I didn’t address before I stopped growing it would continue that way. It gets harder and harder to fix as you get older.

GRADUATION DAY: I graduated school and at the time I was injured. Usually people graduate and go to straight into professional companies, but I really did not want to. I wanted to do other things. And I was injured, so I wouldn’t have been able to do much anyways. I would’ve gotten better but it didn’t feel right. I knew a guy in Los Angeles who had set some pieces for our school—a good family friend—and he offered me a couch. He lived right near a studio so I could take classes there, and I was just training and recovering.

MASTER P: First I started doing commercials just to support myself. Anything and everything. I had no interest in acting; I did it solely because it was abstractly interesting to me, the strangeness that goes on behind the scenes. I’d do anything that sounded ridiculous. I did a Master P music video where I had to lip sync to some new rap he was doing. We were up in Topanga Canyon with this random guy on his Nikon camera taping us. We’d learned the song 10 minutes before. I was in these glasses I found in the garage, my roommate’s dress shoes that were way too big for me, and some pants and his dirty dress shirt that I got out of the laundry. The shoot ended when a police chopper flew over. He was like, “Oh shit, we better go.” He handed me a wad of 200 bucks and we just left. [laughs] That was the nature of all the projects I used to do.

FIRST FEATURE FILM: That was another wacky story. I had less than five lines in One Night (2016), and only because my manager represented [one of the lead actors] Isabelle [Fuhrman]. They were looking for this extra and he was looking for things to do to get me some footage. Then they ended up not working with the lead opposite Isabelle. I was around, so they read me for the part and they let me have it. To my knowledge that’s what happened. I was going to be shooting for two days; I ended up shooting for two more weeks. I think that’s when I decided really that this is where I belong.

PREPARING TO PLAY HAWK: I did my best to remind myself of what it was like when I was 15—how you don’t have those walls up yet, how susceptible you are to outside influences, how you view your parents and those people who were such pillars for you.

I loved where [creator] Jessica [Goldberg] and her team took him. You have all these predictable pitfalls in storytelling—he’s the son who’s troubled because he’s being pulled every which way, and he’s trying to figure out who he is, but he can’t because he has nothing to hang on to. There’s all sorts of obvious things that you would have that character do. I was ecstatic when I realized they were really doing something new and fascinating. I’d always felt Hawk was completely different and a lot more thoughtful and intuitive than a lot of people, a lot more hurt by things than the average teenager would be. That’s how he’s been raised. It felt very natural. I was always pushing for him to be a lot more rebellious, and I think the directors were brilliant enough to remind me, “Not yet, you’ll get there.”

WORKING WITH AARON PAUL: I was actually working with Aaron for about two months, and then I watched Breaking Bad. It was really fun: “Aww! Little Aaron!” We spent a lot of time together. I was passed down Bryan Cranston wisdom.

The entire thing was a beautiful experience. Every single person just clicked. That was probably what everyone talked about the most on set—how well everyone got along. The energy was so good. Every person was present and genuine, and everything went so smoothly. We have to say that anyways, but it actually happened.