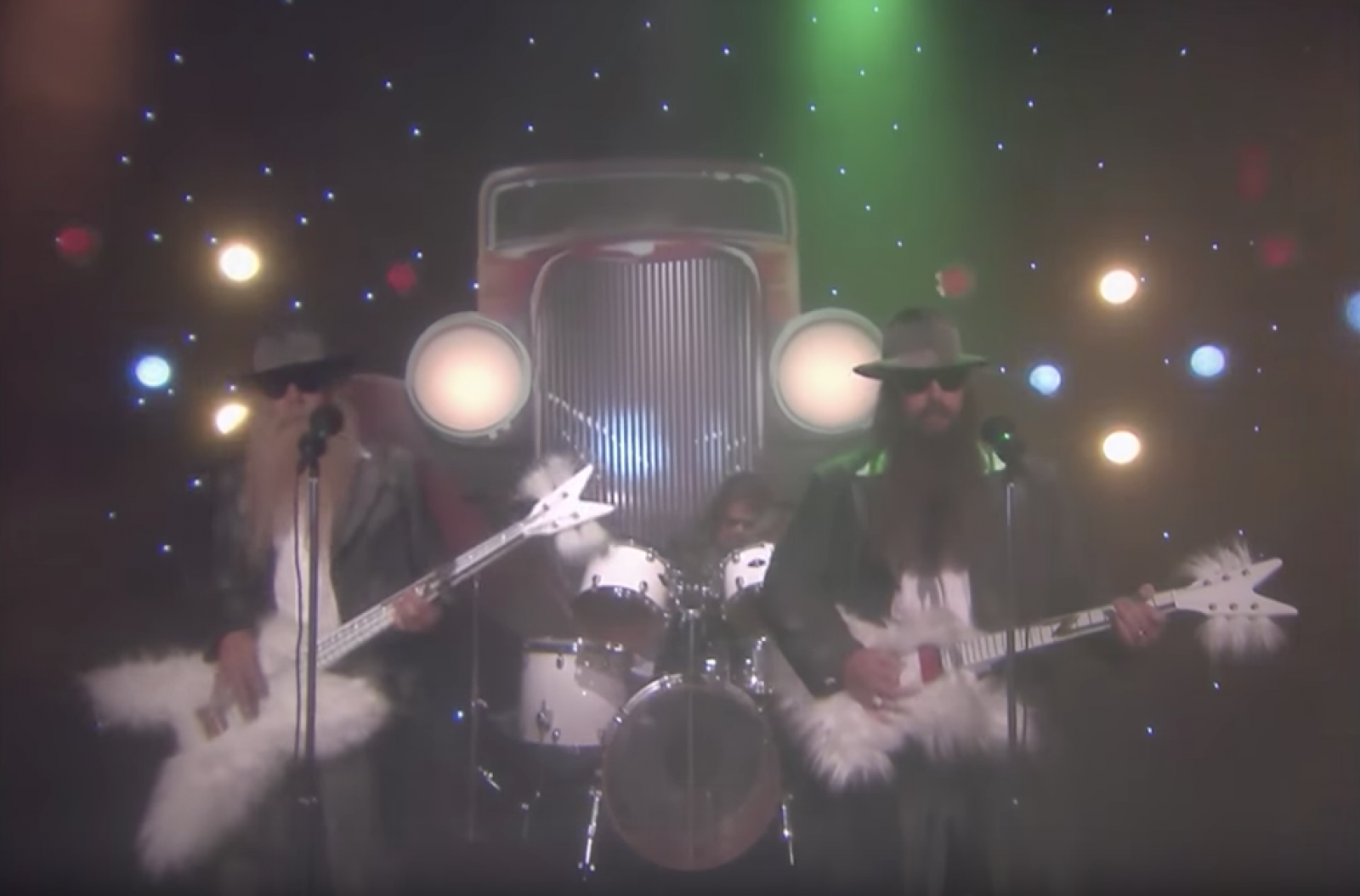 MTV formed me and I am literal garbage and don’t exist without what MTV did to my brain. I was the little kid who locked his grandparents out of their bedroom so he could watch the new Stevie Nicks “Stand Back” video in peace, ignoring their loud and frantic knocks. My introduction to gay people was Pete Burns in the “You Spin Me Round” video, thank god. I got my work ethic from watching Janet and Madonna chair dance, a lost art that I worship more than any other art. My great desire for a life of sin and glamour came from being seven and watching the great ZZ Top videos, RIP DUSTY HILL. At seven, I knew that I wanted the life that bad girls and a ZZ Top keychain could bring me. Anyways, I wondered what MTV videos changed everybody else’s lives the most. So I texted 40 major people to find out their answers.

“Basically the only video I have ever cared about is the Janet Jackson “Pleasure Principle” video. I remember being a little boy and thinking that Janet Jackson was the coolest person ever cause she was a dancer who lived in a warehouse, and that’s what I wanted to be too. Years later, I still think it’s the best video she ever made— it was easily her best look in a video too. Later in life, I became an Oakland warehouse rat (like, I lived in artist warehouses for 15 years) and went to school for dance, basically all thanks to Janet Jackson!”

(Mel: A video UNPARALLELED! Watch it NOW!!!!!!!! Watch the whole thing, not just this clip, but anyways here’s a clip.)

“The lips. The leather. The singularity of movement. The heterosexual forced to be camp. In fact, MTV is pretty much defined by heterosexuals engaging in camp.”

“Still the most bone-chillingly memorable video I’ve ever seen. This one fucked with me for a long time.”

Scott Ewalt, “Spellbound” by Siouxsie and the Banshees (1981).

“It just seemed like the future. Diversity, sassy girls and all that. Inclusivity. ”

“The music videos with high fashion are the ones that freaked my brain the most. For Madonna, of course I loved ‘Vogue’, but I think ‘Like a Prayer’ is where I really was stunned—like holy fucking shit—and it was such an epic countdown to this new Madonna and this new look and the entire video and the ending like it was all a play that was so, so strong. Duh, ‘Freedom’ by George Michael as well, I mean, stun. LINDA. NAOMI. CINDY. CHRISTY. I could have done without Tatiana, frankly, but whatever. I mean, then ‘Too Funky’ to follow that up—Kill me.”

(Mel: We lost our fucking minds for this video and were running home after school to smoke cigs and catch as many hits of the ‘Free Your Mind’ glamour as MTV would give us).

“I do so love a depressive androgyne with clown colored hair! ”

Jared Abbott aka Assploitation, “Too Funky” by George Michael (1992).

“Ok def Fatboy Slim’s ‘Praise You.’ I remember watching MTV when it came on, and I was genuinely confused. I was in elementary school and had never seen anything like it. It was so different from the heavily choreographed stuff from that time. Anyway, it made me excited and I still reference it to this day and show it to anyone who hasn’t seen it, hoping it will have the same affect on them as it did on me in ’90s.”

“It’s 30 years old and it’s still bad ass, makes me weep, laugh and Stephanie Seymour is so fucking beautiful in it. Whenever I hear the song I see the video. Her legs! That dress! The bouquet.”

“It’s either Madonna, “Papa Don’t Preach”— when she got that Jean Seberg hair cut and her néw body, and she was dating or married to Sean Penn—or Peter Gabriel, “Sledgehammer,” when you could really see what you could do with video art. Remember his face with fruit, and then it became animated!”

(Mel: We’re now entering a five-person Madonna rock block, because it’s Club Mel and it’s Madonna and she is the true GOAT of MTV and she formed my aesthetic everything, so. And I want to say AGAIN that Madonna’s look transformation “Papa Don’t Preach” is the greatest and most successful visual transformation by any pop artist from one ERA and MOMENT to another, period. This changed the game of aesthetics forever. THIS is the moment! I’m losing my mind here).

“‘Like a Prayer’ because of the burning crosses and religious eroticism. It’s really did change my life because it slammed through those religious taboos and made me consider black lace as a serious choice for a day look. Also, Jesus was HOT! Wax Jesus from that video has stayed with me for a long time.”

“It’s really hard to choose because there are so many that are deeply important to me, from so many different eras. I would have to say the Madonna “Vogue” video, directed by David Fincher. For a video that deeply referential and evocative of Hollywood’s golden era to be a stage to announce ballroom culture to the mainstream, when you’re five years old, is the sort of brainwashing most parents at that time feared. Nothing was ever the same again.”

(Mel: This video is one of the greatest moments in the history of music videos and MTV. Remember the world premieres on MTV? They were such a BIG THING. Do YOU remember where you were when this shit premiered??? I was on spring break in 8th grade. Palm Beach. MONUMENTAL).

(Mel: this is the best video ever made, I will fight anyone on this).

MEL: YOU’RE NOT the only one saying that, but honestly if I got 34 “Justify My Loves,” I would run them all bc its THE right answer.

MEL: Let’s give it a tie. Do you remember having to buy the video tape at Tower Records or whatever since she was banned from MTV???

WYATT: I for sure jerked off to that video.

“It’s Duran Duran’s ‘Rio’ for me…..the padded shoulders of their monochrome suits! Speedos! Fashion shoot with the metallic gown in the wind! Patrick Nagel! This had everything I wanted in life!”

“‘Jumpin’, Jumpin” by Destiny’s Child because of the Dior. Which I now own THANK GOD.”

BENNETT: “Punk Rock Girl,” by Dead Milkmen. It made me believe in love.

BENNETT: Right??? It was so exciting!

“‘Little Red Corvette’ was important because we hadn’t seen black people on MTV before.”

(Mel: The girls. The fucking girls. )

“Music videos , wow. I used to direct music videos in the early ’90s— check out ‘Pinion’ and ‘Help me I’m in Hell’ (two Nine Inch Nails videos I directed) you will like them! Two other favorites are ‘Slap My Bitch Up,’ by Prodigy, and ‘Weapon of Choice,’ directed by Spike Jonze.”

“‘Wicked Game’ by Chris Isaak, and ‘Love Will Never Do Without You,” by Janet Jackson.”

(Mel: Sophie’s choice, had to add both).

(Mel: This video!!!!!!!!! Home run. Top 3 life changers. At 8 years old i just knew i wanted to be hanging with those bad girls and getting in on what that ZZ Top keychain life was ALL ABOUT).

“‘Being Boring,’ Pet Shop Boys. If you can mention a second one, I am pretty partial to ‘Boys Boys Boys,’ Sabrina.”

(Mel: Done. I will never turn my back on the boys boys boys video.)

(Mel: One of the best outfits ever in a video and everybody knows it).

” I have to say ‘Freedom.’ Almost corny—now—but Michael’s voice was a thrill at the time, and it WAS all about the supers. Kind of affirming how central fashion was.”

(Mel: This video. Can anyone ever do anything this good ever again?!?).

Special thanks to Assploitation for the video magic.