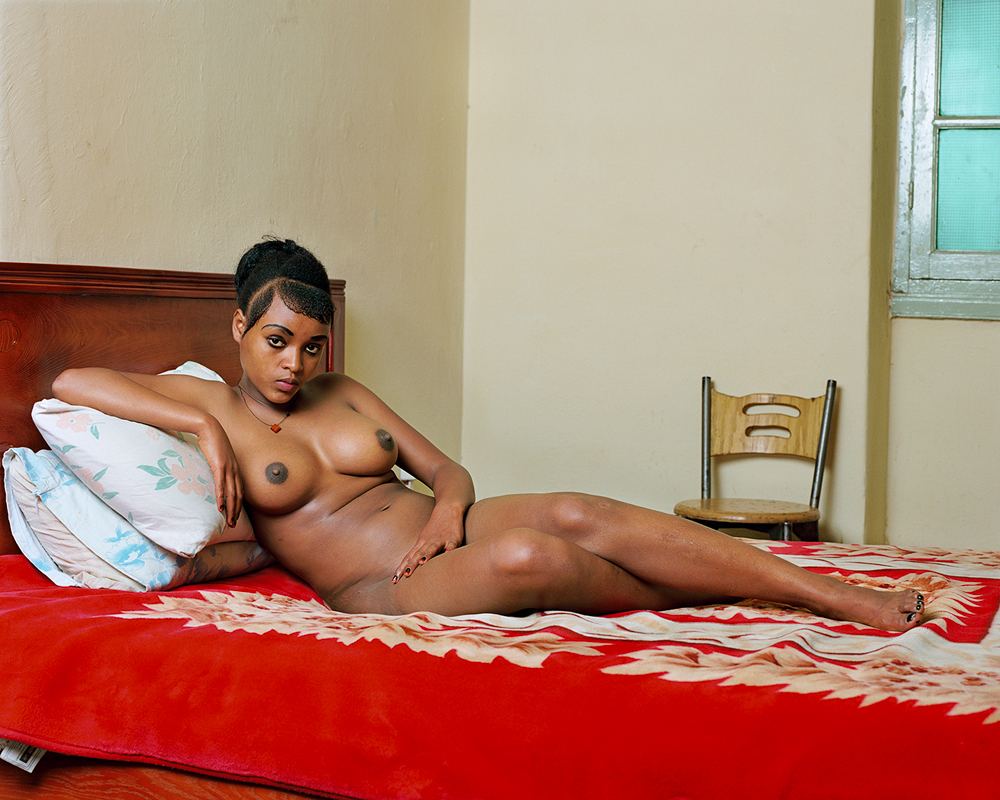 In the summer of 2013, Los Angeles-based interdisciplinary artist Awol Erizku flew to Addis Ababa, the capital of Ethiopia, with not much more than his camera and photographs of Edouard Manet’s Olympia and Auguste-Dominique Ingres’s La Grande Odalisque. Through the trip, he aimed to challenge the mythologized art historical roles of Venus and the odalisque in Western painting, resulting in a new body of work currently on view at The Flag Art Foundation in New York. “Awol Erizku: New Flower| Images of the Reclining Venus” is a compelling series of portraiture, depicting sex workers reclining nude on beds in colorful hotel rooms throughout Addis Ababa. They mimic the poses of Olympias and Odalisques, but infuse the figures’ histories with new meaning.

“I was thinking about Manet’s Olympia, and it’s one of those things I have always had an issue with because of the hierarchy,” Erizku says. In Olympia, a white woman lies nude on a bed, with a flower tucked into her hair, black necklace tied tightly around her neck, and wears pearl earrings, while an African woman stands bedside presenting a bouquet of flowers. Manet’s painting has played a large role in defining ideals of beauty and aesthetics in western culture, so for Erizku, his own images present “updates” that he considers missing from the trajectory of contemporary art.

Unlike works by artists Mickalene Thomas and Rénee Cox, Erizku considers his work having less to do with creating liberating feminist images and more to do with elevating the universality of blackness. In this way, Erizku’s guiding impulses for the polychromatic show expand upon themes explored in past solo shows, including “Black and Gold” and “The Only Way Is Up,” as well as a recent screening of his video work Serendipity at the Museum of Modern Art. The video references Duchamp’s readymades, the Bust of David, and Vermeer’s Girl With a Pearl Earring, which he also reimagined as a brown girl in a 2009 portrait entitled Girl With a Bamboo Earring. He continuously explores questions surrounding the representation of beauty in contemporary art.

When looking at “New Flower| Images of the Reclining Venus,” it is undeniable that the images also lend themselves to a conversation about commercial sex work, prostitution, and women’s rights. In Ethiopia, both sex work and prostitution is legal, and Erizku, who paid the women to take their photographs says, “They could take off as much or little clothing as they wanted.” Additionally, the women could choose between recreating Manet’s or Ingres’s Venus, because for him, “it was a collaboration.”

Hours after the artist landed in New York to install the portraits, we spoke with him about the show and his practice.

ANTWAUN SARGENT: Did you know what you wanted to do when you landed in Addis Ababa?

AWOL ERIZKU: I knew exactly what I was there to do. It was like a mission to be accomplished. I had a friend who was doing a Peace Corp mission in Ethiopia, who came back and ask me if I had thought about looking into the sex work industry in Ethiopia, because she spoke to a lot of women who were in that position. Around that time I was thinking about Manet’s Olympia, and you have a prostitute in the foreground—not a sex worker, but a prostitute, this is a well-known fact—and the bed becomes a platform. Then you have this black figure offering a flower to her, and I think it’s a fact that Manet put her there as a compositional device, as an after thought, so there wasn’t a negative area. That interested me a great deal.

ERIZKU: Looking throughout history, the reclining Venus is a recurring theme in art history, and now you have the Mickalene Thomases and the Renée Coxes, but no one has really done it from a male perspective.

ERIZKU: The reason why all of these women are in similar poses is because it’s not just Manet’s Olympia, but also the Odalisque, which is a reclining Venus. It’s about not seeing enough of those bodies, and it goes back to that conversation of people not being ready to see the presence of a nude black woman. If we are not comfortable with the black female body by now, when will we be ready for it? As an artist, I wanted to solidify that and create a series of reclining Venuses.

SARGENT: In the image that leads the show, Brukawit, the figure isn’t even looking at the camera. Her back is turned. Are you exploring the politics of the gaze with that portrait?

ERIZKU: There’s another one where she looks at the camera and it’s the only time she looked at the camera during the whole sitting. It’s about the power that these women have. Granted, they are sitting for me, and their occupation is sex work, but I didn’t want to take their power away from them. So if she didn’t want to show me her face, it was up to her. It was collaboration; it wasn’t me saying, “Take your clothes off and do this.”

SARGENT: But given the circumstances, power was at play.

ERIZKU: The power play between myself and these women, was that they are getting paid to sit for me, but within that sitting, the only requirement I had was that they choose one of the two reference images and that they take off as much clothes as they would like in order to look like the images.

SARGENT: And given the choice, they all took off their clothes?

ERIZKU: Most of them, some of them have underwear on. There are a lot of cultural taboos in Ethiopia that doesn’t make it acceptable to take your clothes off and to be photographed in the nude.

SARGENT: You were born there, right? And then moved to New York?

ERIZKU: My family moved here when I was a baby, but it’s a culture that I know from my parents but had never really seen it as an adult. Going back into the work, the women are posing for money, but there’s this pride that comes with being Ethiopian—a lot of that is saying, “You know, maybe I’ll take my top off, but I don’t think I’ll take my underwear off,” and I was okay with that. The girls without their underwear, they are comfortable doing that.

These women that I photographed moved from a smaller city to the capital and realized they needed to do something to make a living. They found the best way to keep money in their pockets, and for them, it’s sex work. One of the sex workers became my assistant.

SARGENT: How did that happen?

ERIZKU: I had a male assistant and he was taking some of the money from the girls that I was giving them. He was my translator and it was hard to negotiate with the girls because I couldn’t talk to them directly. So when I came across this other woman, I knew I could trust her to make sure the girls were getting everything that they wanted.

SARGENT: Did you have any other issues while shooting these portraits?

SARGENT: …And that you are making something called “contemporary art” far away from New York… [laughs]

ERIZKU: Right! It didn’t come off as, “Here’s Awol Erizku doing his next art project talking about Manet’s Olympia.” So the manger locked the door and called the cops and my assistant and I paid the girls and ran. For the rest of that project I couldn’t work in that area.

SARGENT: Did the women like posing for the photographs?

ERIZKU: I took test shots and had Polaroids. A lot of the women did keep a copy for themselves, and some of them didn’t care. I showed them some of my other work; some were at ease and some simply wanted the money.

SARGENT: Did you choose these women off the street?

ERIZKU: I didn’t choose the women; I picked the room, and my assistant brought the women, and I worked with who came and sat for the session. For Feker, the girl in the red room, I thought I wanted to see someone taller when I was making the images. It became one of my favorite portraits from the series, but I did not know that when I was making it. In the moment, my mindset was, “I have someone to shoot today, let me make the best image I can.”

SARGENT: Conceptually, what are you trying to achieve?

ERIZKU: What I have always been doing: When I made Girl With the Bamboo Earring, I didn’t have to announce that it was about having the black presence in this form. Every time I do a show, people are like, “Is this about blackness?” So conceptually, I try to move around it because that context is a way for people to put [my work] in a box. No. This is what it is; this is a reclining Venus as much as Manet’s reclining Venus.

“AWOL ERIZKU: NEW FLOWER | IMAGES OF THE RECLINING VENUS” WILL BE ON VIEW AT THE FLAG ART FOUNDATION THORUGH DECEMBER 12.  FOR MORE INFORMATION ON THE ARTIST, VISIT HIS WEBSITE.