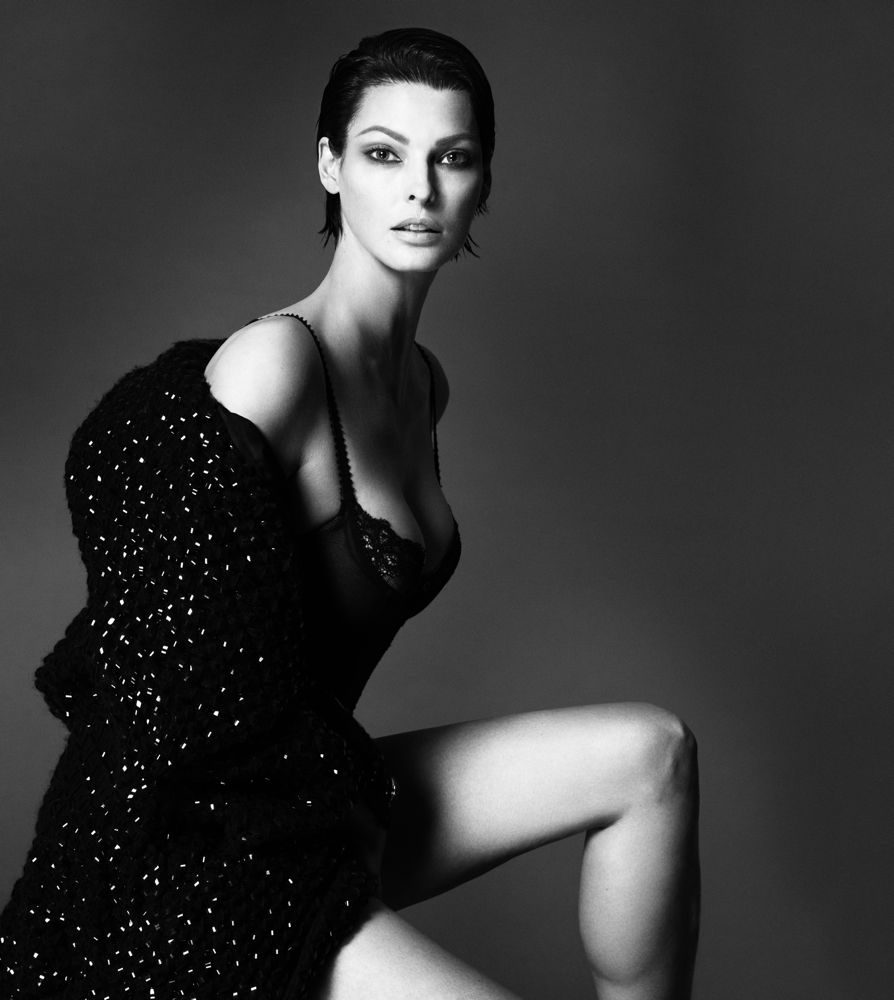 “I love everything about fashion . . . I used to stay with Azzedine Alaïa until four in the morning, letting him stick pins into me because it was a dream.” linda evangelista

INTERVIEW: Did you ever keep a diary during your early days as a model?

LINDA EVANGELISTA: I used to keep a diary in the beginning. I had my agenda with my appointments in it, and used to put Polaroids in there from the shoot and make a note. That lasted a couple of years. When my son was born, I thought, I will never forget this moment, and I thought that every day after. And recently he asked me, “When did I lose my first tooth?” And I said, “I don’t remember.” [laughs]

INTERVIEW: So you’re not planning to write a memoir anytime soon.

EVANGELISTA: To do that, I would have to ask people about what the hell went down.

INTERVIEW: But you must remember starting out and all of the work it took to get to the top.

EVANGELISTA: I remember doing the rounds of go-sees in New York with Elite. I remember meeting John Casablancas, who I adored.

INTERVIEW: In his obituary, he was quoted as saying that you were the only model who ever thanked him for helping her become such a big success.

EVANGELISTA: That’s so sad. We butted heads a few times, but he’s right. I’m not self-made. I can’t take full credit for where I am today. There have been so many people behind me—supporting me, pushing me, advising me, guiding me. I didn’t get here on my own.

INTERVIEW: How did you first get into modeling?

EVANGELISTA: I took a modeling course in my hometown, St. Catharines, Ontario, Canada. It was sort of a scam. In order to work as a model, you had to pay for the classes. My mom paid for me. They sent me there at 16, and I was chosen by a Japanese agency to go over to Japan for the summer to work.  My parents were strict Italians who didn’t let me go out past 10 o’clock, and I had to choose between going out Friday or Saturday night and was not allowed to have a boyfriend. But they said okay. I got there and it was a catastrophe. They wanted me to take my clothes off and shoot me naked. It was a nightmare and I panicked and basically the Canadian Embassy helped me out. I was there about two days and went home, saying, “I don’t want anything to do with this ever again.” But how I got my start was that my modeling agency insisted I enter the Miss Teen Niagara Pageant.

INTERVIEW: Like a beauty pageant, with a swimsuit competition and a segment where you’re forced to give a speech about bettering humanity?

EVANGELISTA: Yes, all of that stuff. It was a full-on pageant. I wore a gown that my friend Christina made for me. I didn’t even place, but a scout from Elite who had found Kim Alexis and Dawn Gallagher was there and he gave me his card. I had finished early from high school and didn’t have much to do before going off to college, so my mom suggested I call him. I did, he took pictures of me, sent them off to New York, and New York wanted to meet me. That’s when I met John Casablancas. He said I looked like Joan Severance. I said, “What?” I knew exactly who she was. I had her up on my walls.

INTERVIEW: Did you do well in New York?

EVANGELISTA: New York kept me around for about a month—I did, like, eight or ten go-sees a day to see if someone would test me. A few did but nothing really happened there so they sent me to Paris. I went with a bunch of models. We stayed at L’Hotel rue des Beaux-Arts, the one where Oscar Wilde died. We all got bed bugs there. My mom said that she would pay the extra money to go into the Hotel La Louisiane. Those were the two hotels where all the young models stayed.

INTERVIEW: Was it a stressful trip because you knew you had to land some jobs or get sent packing?

EVANGELISTA: Well, I ended up getting work. I got catalogs and a couple of editorials, but it was three years in the making. I wasn’t an overnight success. I didn’t dream higher than what I was doing. I just felt fulfilled that I was working and doing things and being paid for it. I never imagined Vogue or doing Versace. I didn’t think I qualified for that. [laughs]

INTERVIEW: You probably just thought, I’ll do this for a little while before moving on with my life.

EVANGELISTA: I was told it would last about three years—that’s what the agents told you. A good career was three years.

Linda was an incredible canvas and model to work on. I could create so many looks and she really understood them and got into the persona of what we were trying TO Do. François Nars

INTERVIEW: So when did lightning strike?

EVANGELISTA: It all started to come together when Arthur Elgort booked me for French Vogue, and then British Vogue, and then French Vogue started using me. I did Bill King’s last cover of French Vogue. Then I met Peter Lindbergh and Steven Meisel and Patrick Demarchelier, and I started working with the big photographers and then went right away to [Irving] Penn and [Richard] Avedon, and then the haircut …

INTERVIEW: You and Steven Meisel have always had a very close connection.

EVANGELISTA: Working with him was easy because he helped. Some photographers don’t help you. He helped, and then you get this confidence, and when you have confidence, it can take you to other places. I feel safe with him. I feel inspired. I love taking it to where he wants to take it.

INTERVIEW: Did you keep a record of the number of times you dyed your hair?

EVANGELISTA: I have no idea. It was sporadic, but I remember I didn’t see my mom for a few months, and I had cut my hair shorter and stopped coloring it. I was back to my original color. When she saw me, she said, “Oh, what is this color? This is far too harsh on you. Why did you pick this color?” [laughs] It had been so long that nobody remembered what my natural color was. It’s dark, dark brown.

INTERVIEW: It must have been fun to reinvent yourself every time you were on a shoot.

EVANGELISTA: Hair is just one way of expressing ourselves. We express ourselves through how we dress or through tattoos or body art or piercings or cosmetic surgery …

INTERVIEW: Did you ever get a tattoo?

EVANGELISTA: Nope, never went there. But I love tattoos. I love sleeves. I think they’re gorgeous.

INTERVIEW: In the ’80s and ’90s, you were the icon of high-fashion modeling. Did you feel the aura around you?

EVANGELISTA: You know, men are not my target audience. I was always sort of jealous—not jealous, I admired those girls who did Playboy, Sports Illustrated, and Victoria’s Secret. I love looking at them too, but I never went in that direction. I just stayed in fashion. I worshiped the models who were able to do both. But I really liked fashion. I was one of the first print models to go on the runway because I wanted to do runway. When I started doing the shows, I was the only print girl there. I was doing it with the Dalma Callados, and Anna Bayles, and the Pat Clevelands—the runway girls. I wanted to be a part of that world. I love everything about fashion. I even love the fittings and watching it evolve from a pattern to a muslin to the final product. I used to stay with Azzedine Alaïa until four in the morning, letting him stick pins into me because it was a dream.

INTERVIEW: Did you keep a lot of the clothing you’ve been given over the years?

EVANGELISTA: No. I do have a lot, and I’m grateful, but I know that some models have warehouses or storage places for their clothes. You don’t really get to keep the clothes. Sometimes when you would do shows, you would do it for trade. I always supported young designers and never charged them. And then, some designers were just very generous. Karl Lagerfeld, my hero, is one person who gives, and I have very beautiful Chanel. That’s one archive I do have.

INTERVIEW: What was it like to be in the George Michael videos? You were in “Freedom 90” and “Too Funky.” Those videos were how a lot of America came to understand fashion and the big faces.

EVANGELISTA: We did hit another audience there. No matter where I went in the world, they knew me from the George Michael video and not from my campaigns. The day filming the “Freedom 90” video was a long day and it was so much fun. The night before, I was in Paris. That’s the night I had dyed my hair platinum. I took the first flight to London and showed up on the set. Everybody else had been given a Discman to learn the lyrics to the song, but I had never received mine. I was the last one to be shot, and Georgie came to me and said, “Now, Linda, you’ve gotta hit these difficult lines that are overlapped and that no one got.” So he played it for me a few times, and I was like, “Oh my god, I don’t even know this song,” but it all came together.

INTERVIEW: It’s such a good video. And now here you are today, still modeling and going strong.

EVANGELISTA: I’m still going as strong as I would like it to be. I do not work every day. I am not up for every job. There’s a place for me. I think it’s great that there’s no age boundaries anymore or race boundaries or size boundaries. That’s wonderful. And that’s something I’ve seen change over my whole career.

INTERVIEW: So you pick the jobs you want to take and let the rest go.

EVANGELISTA: I’m presented with offers, and if it’s right for me, I do it.

INTERVIEW: Has having your son made it more difficult to choose jobs away from New York?

EVANGELISTA: I’ve only left him a handful of times—for three days maximum. I can’t leave him. I’m hands-on, and I have separation anxiety. I admire women who are able to do their job and come back, but I need to be with him. And we love New York.

INTERVIEW: You aren’t moving back to Canada any time soon.

EVANGELISTA: We just spent the whole month of July in Canada on a lake with my family and had the time of our lives. The situation was one step up from camping. We were in a cottage and we got to fish and water ski and paddleboard and canoe and sit around campfires. It was an absolute dream. Then I came back to New York, and it was wi-fi and a manicure on the corner and you can call the deli and … I missed it.