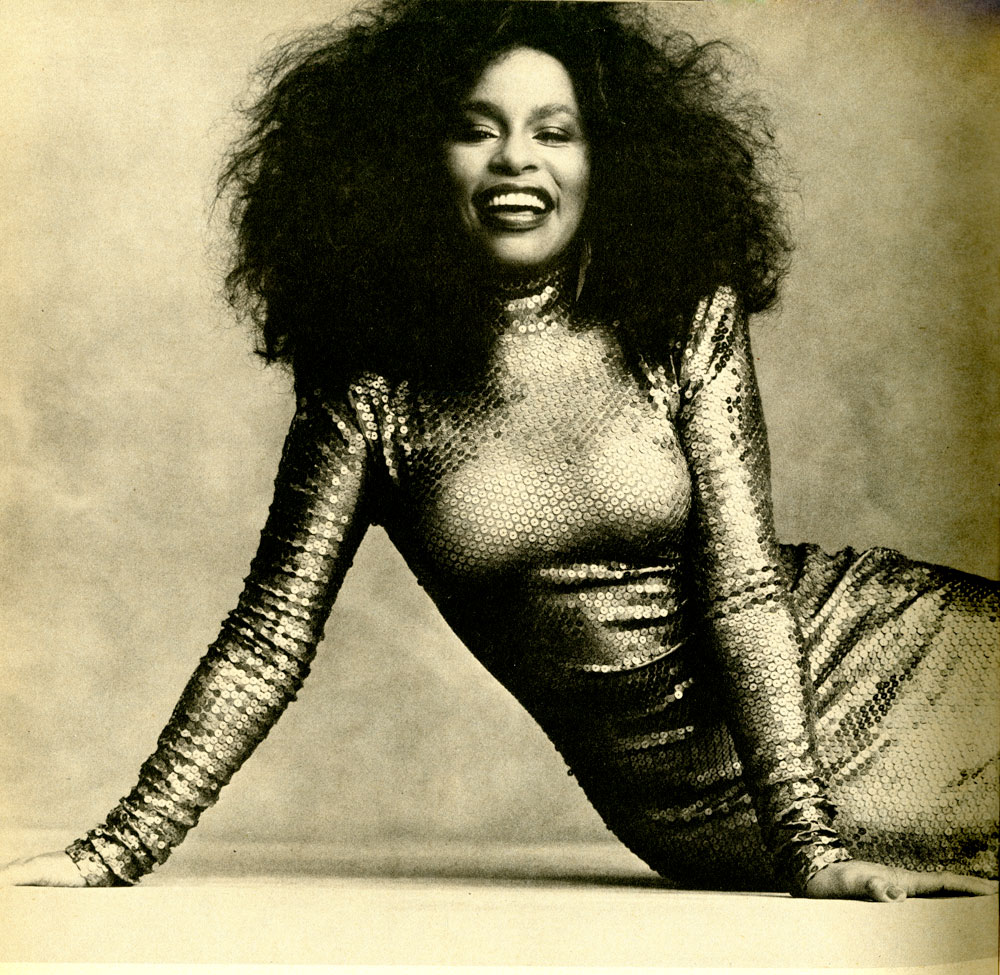 After emerging as the frontwoman of the group Rufus during the 1970s, Chaka Khan (born Yvette Marie Stevens) quickly built a name for herself as a soul singer and the queen of funk. As a solo artist, she received chart-topping acclaim with hits like “I’m Every Woman” and her cover of Prince’s “I Feel You” in 1984. Since then, Kahn has been nominated for 22 Grammy Awards (two of which were for Rufus), and has taken home 10. She has also released more than 11 studio albums, including 2007’s Funk This, which included another Prince cover. Tonight, the musician takes the outdoor stage as the opening act of the 37th annual Celebrate Brooklyn! Festival in Prospect Park. To mark this occasion, we’re revisiting the first article Interview ever published on the Illinois-native—an interview from September 1980.

Chaka Khan first grabbed the public ear in 1972. She was 20 years old then, singing with a group named Rufus, and they had a hit record called Tell Me Something Good. Many more hits followed—in fact, all of Rufus’ six albums went gold if not platinum—and Chaka’s new solo LP (Warner Bros.), Naughty is currently feeling right at home at the top of the charts.

In addition to her musical duties as Duchess of Funk, Chaka has two children, Damien (named after the character in the Hermann Hesse novel) and Milini and they occupy a large chunk of her time, energy, and heart. In the midst of her second divorce, she is raising her brood alone and is determined to do a good job of it.

Talking with her at her modest Beverly Hills apartment, one of numerous homes she maintains, Chaka sipped a can of iced tea and fidgeted nervously while her kids scampered about the room and the smog simmered outside. She’s a private, fiercely independent woman who seemed to tolerate rather than enjoy our conversation, and she answered my questions in short, clipped sentences. Using few words, she managed to speak her mind in no uncertain terms.

KRISTINE MCKENNA: How do you feel when you sing?

MCKENNA: Most of your songs are about romance. Is finding perfect love the main issue in life?

KHAN: There is no perfect love—that’s something I’m very realistic about. And contrary to what you say, most of my songs are not about romance, they’re about life. In fact, I try to stay away from love songs. I get sick of them. Especially bluesy ones, crying songs, whining about some lost lover—I hate shit like that, and I’ve always felt that way. I’ve never liked the blues.

MCKENNA: A lot of girls can sing. What’s different about you that’s made you so successful?

KHAN: I have no idea. Maybe a little bit of luck. But I’m an extremely determined person. I’m very serious about what I do.

MCKENNA: Have you always been ambitious?

KHAN: Yes. America breeds ambition and while that can be a good thing, most of the time it’s not. Ambition also breeds competition and that can be a very bad thing. People become chronically preoccupied with competing and don’t know when to stop. It can become unhealthy.

MCKENNA: Who or what played a part in shaping your vocal style?

KHAN: If anyone in particular did, I’m not aware of it. I wasn’t exposed to much Gospel music so my only religious singing were some Ave Marias. My mother was into opera and my father was into jazz, so there was a lot of jazz in the house where I grew up. I was born and raised in the University of Chicago area and had an uneventful middle-class Catholic childhood. I had a heavy Catholic upbringing and Catholicism is terrible—it’s the reason there were slaves. Mass every morning at seven o’clock during Lent. Shit. It was a great relief when I finally realized what I was into and got out of it, and although it may have helped make me the strong person that I am, I hate to give it credit for anything in my life. It’s a totally negative, man-made religion. Anyhow, I also hated school so I quit when I was 16 and joined a group so I could make some money.

MCKENNA: How has success affected your life?

KHAN: It hasn’t because I haven’t let it. I control my life and I have never let success run away with me—I’ve taken it and ran. And the only thing that could threaten my stability is me—I’m my only threat and my own worst enemy. Beyond that, I don’t feel successful. I’m nowhere near where I plan to be as far as my goals.

MCKENNA: But your records always go to the top of the charts.

KHAN: So what is that?

MCKENNA: What’s your idea of success then?

MCKENNA: What’s been your biggest disappointment in life?

KHAN: Humanity and the lack of love among people. Ignorance without the desire to know. Racism and stupidity.

MCKENNA: How important is physical beauty?

KHAN: It’s not important at all beyond keeping yourself together and staying healthy. And I don’t mean with makeup and shit like that because I’m not into that. I’m more oriented towards natural beauty.

MCKENNA: What effect do you strive for when you dress yourself?

MCKENNA: Do you feel beautiful?

KHAN: Yes, and I always have.

MCKENNA: Do you spend a lot of time shopping?

KHAN: Yes, mostly for my kids. I love to buy things.

MCKENNA: Why do you live in Los Angeles

KHAN: It’s a good place to raise kids. The atmosphere is healthier, there’s lots of sunshine and it’s kind of laid back.

MCKENNA: Do you tend to see things in terms of good and evil?

KHAN: Yes, it’s either one way or the other as far as I’m concerned, and most people I encounter are good. I mean, there are a lot of sleazy people around, especially in the music industry—although it’s probably the same in any field, I just happen to be hip to the sleaziness in the music business. What’s really unfortunate is that a lot of the people that are sleazy don’t even know it.

MCKENNA: Do you feel it’s been a disadvantage in life being a black woman?

KHAN: I’ve had to work a little harder but I don’t think that was bad for me.

MCKENNA: Which has been a greater handicap: being a woman or being black?

KHAN: Being black, definitely. And although people might like to think things are changing, I know it isn’t so. Racism has become more sophisticated in its execution but it’s as prevalent as it’s ever been.

MCKENNA: Is it less of a problem in Los Angeles?

MCKENNA: Does it bother you that the pop music audience is segregated—that there are separate charts for black and white music?

KHAN: Segregation in any form bothers me greatly. It doesn’t bother me any more in pop music than it does at the swimming pool.

MCKENNA: Do you think that white people have an inferior sense of rhythm?

KHAN: No. I have white people in my band and white people have me in their bands. Breaking down those barriers is something that’s very important to me.

MCKENNA: Do you feel that you’ve made progress in breaking down those barriers?

KHAN: Not enough to be significant as far as the world is concerned. If I wanted to fight to make a better world racially, I wouldn’t be in the music business. You dig, if I were going to be a freedom fighter music is the wrong field. A song is not going to change this damn world. Instead of making people mad about this shitty situation, it’s going to make everybody happy. It’s a false thing. It’s like a lullaby as opposed to a gun. People need to be slapped into reality and music just doesn’t do that.

MCKENNA: Who do you think has made a strong impact as far as improving the racial situation?

KHAN: Jesse Jackson is very good because he’s an intellectual person. He looks at things as they really are and isn’t afraid to commit himself to a position. He believes in educating oneself, that freedom comes with developing the mind and I agree that that’s very important.

MCKENNA: What’s the biggest obstacle in your life right now?

KHAN: Ignorance. The very thing we are talking about. Because I won’t become a household word, or achieve the fame I deserve in my lifetime because of the way I look.

MCKENNA: But music seems like one of those few fields where that code doesn’t apply so stringently.

KHAN: Darling, you’re right, music is one of the fields where success is more attainable for black people, but it still is not free of the stigma of all that shit. It isn’t. And I know households where my music will never be heard because of the way I look.