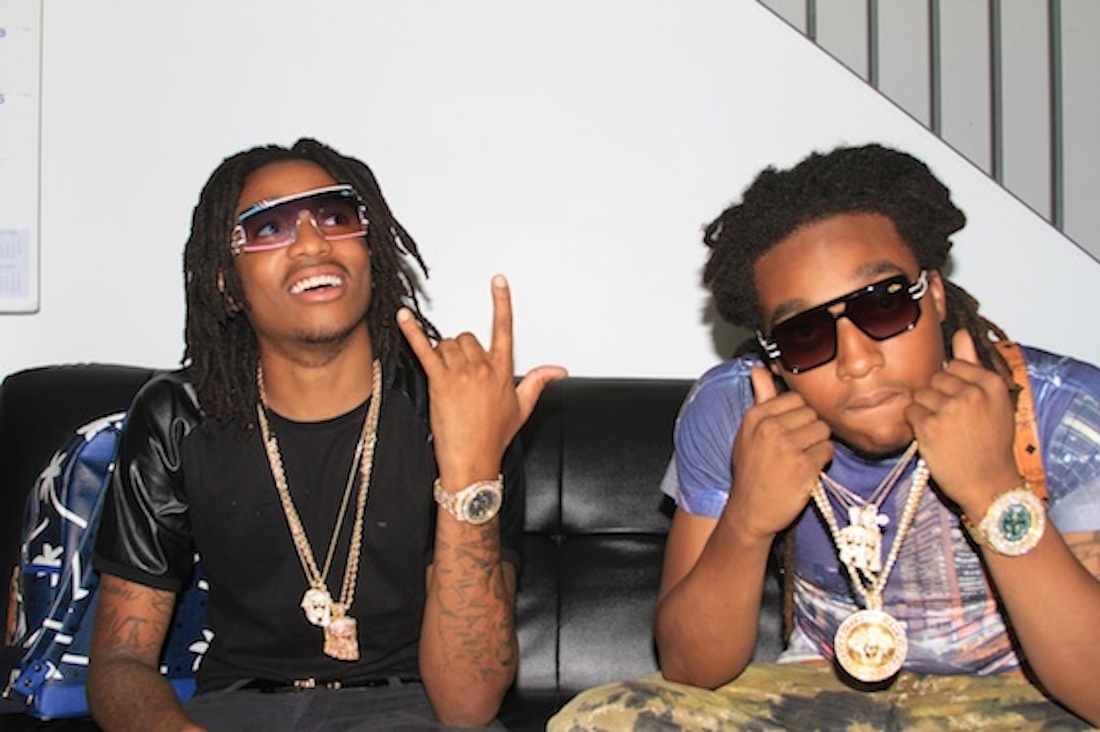 In June, Drake released a remix to a song called “Versace,” a booming pop-trap confection that serves as preamble to the September release of his album, Nothing Was The Same. It’s a lot of fun. There’s a certain thrill to hearing Drake lay claim to Illuminati membership on account of his Versace Medusa pendants, and repeating that brand’s name over and over somehow creates a sticky earworm of a chorus. But “Versace” is not a Drake track—not technically, anyway. He just added a verse to a song by the very young and almost famous Atlanta-based trio Migos.

Two-thirds of Migos, Quavo and TakeOff, made their first trip to New York this week. They arrived sans their third member, OffSet, who is currently incarcerated, present only through the often-repeated “Free OffSet!” ad-libs at the start of their tracks and the #FreeOffset hashtag all over their Twitter feeds. After a flurried media schedule, the two were taking a break at a warehouse for Rocksmith, a streetwear brand, in Williamsburg, Brooklyn. A man snapped photos of the two, both decked out in —what else?—Versace chains over tight t-shirts.

Diane “Shabazz” Varnie, the publicist putting together the Migos New York whirlwind, came up rocking a snapback emblazoned simply with the word “MOBBING,” the standard keepsake from events thrown by Surprise Party. She was worried about New York haters she had encountered online earlier that day.

“They were saying, ‘They gonna get booed, they can’t handle New York, they need a Drake hologram,'” she sighed.

Such concerns will probably be put to rest tonight, when Migos takes the stage at Westway, the ex-strip club hot spot in the West Village. They’ve seized upon a formula that works with or without the presence of Aubrey Drake Graham. The trio takes the already spare trap sound and strips it more, dropping quick pitter-patter rhymes over drill snares and then repeating one half-nonsense phrase—”Hurricane wrists,” or “Trapped out the bando,” or, hilariously, “Hannah Montana”—to create a super-catchy hook.

Quavo and TakeOff chatted candidly in the Rocksmith basement as their manager, former Young Jeezy and Gucci Mane impresario Coach K, and other entourage members prepared for the days ahead. They seemed excited. They were getting their teeth molded for golden grills, their first pairs, immediately after the interview.

NATE FREEMAN: How do you guys like New York?

TAKEOFF: You can get run off the road!

FREEMAN: Is there anything particular you guys want to do?

TAKEOFF: I wanna go shopping. This is supposed to be the fashion state! I haven’t seen anything yet!

QUAVO: They get everything before we do.

TAKEOFF: I want to go shopping, and the designer stores, on Fifth Avenue. They close early!

FREEMAN: Well, you can go down to Soho, they have all the same stores, they stay open later.

QUAVO: I’ma go where everybody goes.

FREEMAN: I hear you guys are gonna stop by 1Oak tonight.

QUAVO: We just come to pop bottles, talk to some models.

FREEMAN: Well, it’s in the Meatpacking District. There’s plenty of that there.

TAKEOFF: We’re gonna have one of those nights. We’re going crazy.

FREEMAN: I want to know more about how you guys grew up, in Athens, and then Atlanta. I don’t even know how old you guys are.

TAKEOFF: Now it’s time to take care of them.

FREEMAN: And how did you get into the scene?

TAKEOFF: In about seventh grade, that’s when we started playing around with beats, rhymes. Then we moved to Atlanta. Two years ago, that’s when we really got serious about music.

QUAVO: Turned a lot of negatives into positives.

FREEMAN: You hear “Versace” blasting out of cars all the time. That’s the best metric to figure out how hot a song is.

QUAVO: Everyone’s talking about Drake hopping on that.

TAKEOFF: We met him at [Atlanta Hot 107.9’s] Birthday Bash, he said he listened to the tape on the way down, started naming songs off the tape. He liked “Adios,” “Chirpin’,” “Bando.”

QUAVO: We sent him “Versace” and he got on that.

FREEMAN: So what’s next for you guys?

FREEMAN: I saw the “Chirpin'” video came out today. I loved all the doves. Nice touch.

QUAVO: We let the bird go. It was our first time holding birds in our hand.

FREEMAN: “No animals were harmed in the making of this film.”

TAKEOFF: [laughs] No, no animals were harmed. But there was doo doo on our hands!

QUAVO: We let ’em go and they just went all the way back home, into the wild.

FREEMAN: Who do you want to work with next?

FREEMAN: Anyone in particular?

TAKEOFF: Yeah, you know, Jay-Z. They say he’s one of the greatest.

FREEMAN: Have you heard his new album?

TAKEOFF: It sounds good! I only heard a little bit, but it sounds really good.

FREEMAN: What about the new Kanye West?

TAKEOFF: I ain’t heard none of that yet.

QUAVO: Nah, I ain’t listening to that.

FREEMAN: Tell me about the chains you guys are wearing.

TAKEOFF: I got that rose gold Jesus piece, yellow gold Jesus piece. Then the Pharaoh, this is the custom Versace piece, I ain’t go in the store to get this, nobody ain’t got this.

FREEMAN: You’ve got a lot of Medusas. You wanna address Drake’s illuminati reference?

QUAVO: These right here is the Rolex, and the two Jesus pieces, and this mini rose gold piece.