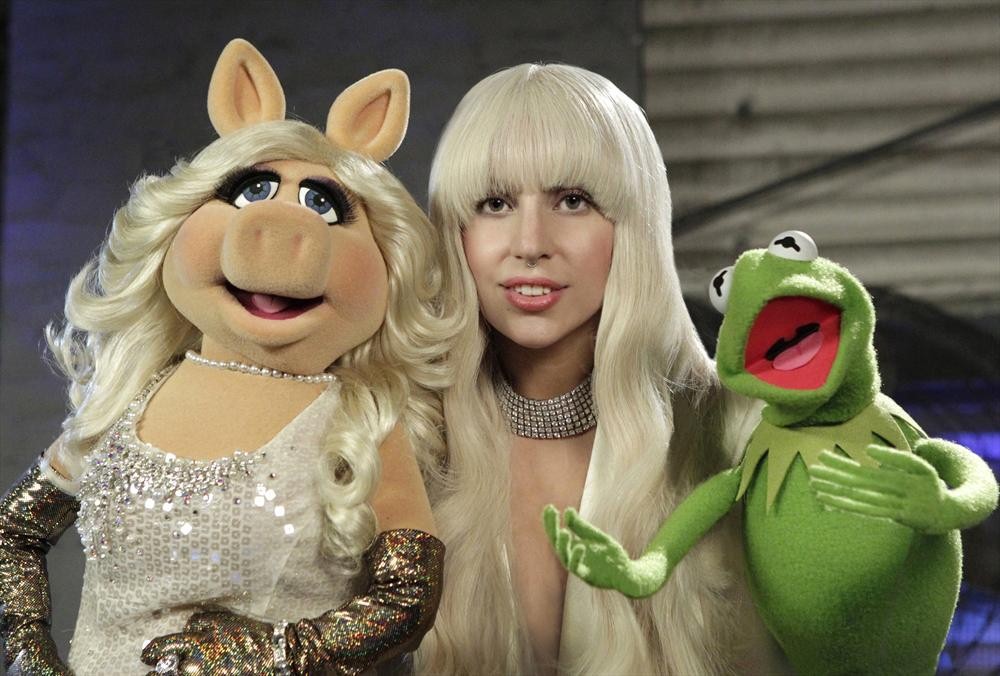 “Into” is a series dedicated to objects, artworks, garments, exhibitions, and all orders of things that we are into—and there really isn’t a lot more to it than that. Today: Mark Burger revisits Lady Gaga and The Muppets Holiday Spectacular, a wondrous and wildly unnecessary TV holiday special that forever cemented the chaos of Artpop.

In 2013, Lady Gaga was the biggest pop star on the planet. After a labral tear on her right hip forced her to cancel the final dates of her Born This Way Ball tour and into seclusion earlier that year, she revealed the title of her next album via tattoo (posted to her own social media site, littlemonster.com), and released its lead single, “Applause,” that August.  An aggressive, synth-heavy testament to Gaga’s love of fame and being famous, the song leaked online the weekend before its premiere, prompting a hurried release and a guerrilla marketing campaign across Los Angeles, in what she described as a “pop music emergency.”  A promotional video, in which Gaga declares herself “over,” encouraged fans to “stop the drama” and “start the music”—most especially her music, available on iTunes. The rollout for Artpop was excruciatingly complex. There was an app, then there wasn’t; Gaga organized collaborations with Inez and Vinoodh and Marina Abramović, as well as R. Kelly and Terry Richardson. “Do What U Want,” Gaga’s song with Kelly, has been pulled from streaming services and all future CD and vinyl productions (Gaga has since apologized for working with Kelly in the first place), and its video, directed by Richardson, was scraped. The Artpop era, mired by complications and false starts in its first months, was in dire need of a brand refresh, and who better to pivot towards than the Muppets?

Though primarily a vehicle to promote both Artpop and Muppets Most Wanted, Lady Gaga and The Muppets Holiday Spectacular, which premiered on ABC around Thanksgiving 2013, is nonetheless one of the most delightful, if completely incomprehensible television specials of the last decade. Over the course of the special, Gaga runs through the majority of Artpop with the help of a couple of her famous friends: she sings “Fashion!” with RuPaul, “Bennie and the Jets” with Elton John (on sister pianos, changing “Bennie” to “Gaga,” naturally), and, with proto-Cheek To Cheek panache, sings “Baby It’s Cold Outside” with Joseph Gordon-Levitt (because, okay, sure.) Elsewhere, Kristen Bell tries to teach Bobo the Bear how to dance, Kermit and Gaga sing a duet of “Gypsy,” and the Muppets make ensemble appearances in “Venus” and “Artpop,” mostly bouncing and swaying in the foreground. The special is loosely pulled along by a one-sided feud between Gaga and Miss Piggy, the latter of whom is convinced Kermit is leaving her for the singer, nevertheless, they all make nice by the time the encore performance of “Applause” rolls around. A truncated version of the special exists on YouTube, but there’s no mention of the special on ABC’s website, suggesting they don’t remember Artpop, either. While revisiting this special, I couldn’t help but recall artRAVE, the two-day promotional event that preceded the release of Artpop. Part concert, part press conference, part flying dress debut, artRAVE attempted to present the album as a more exclusive, capital-A Art project, though with lukewarm results. While Gaga was clearly back up to her feverishly weird theatrics (dressed as a nightmarish Michelin Man), revisiting the footage reveals an audience more interested in taking her picture before leaving their drinks on Jeff Koons sculptures, if not outright vandalizing them, than reveling in the spirit of Artpop itself. Lady Gaga and The Muppets Holiday Spectacular, then, offers a new approach: Lady Gaga as the fun, family-friendly pop star, in a format that allowed her to direct the madness of Artpop with careful precision, albeit without its aggressive, R-rated edge. (Notably absent from the setlist are the more, er, adult tracks, such as “G.U.Y.,” “Sexxx Dreams,” “Swine,” and “Dope,” which include direct references to sex, sexual assault, and substance abuse.) The raunchiest song in the special is “MANiCURE,” and at least the Muppets are absent for it, lest it’s alluded that Fozzi the Bear wants to be thrown on a bed, squeezed, teased, and pleased.

Lady Gaga and The Muppets Holiday Spectacular is fun for fun’s sake, the type of shameless promotion of a pop record that would, for better or worse, define the second half of Lady Gaga’s career. It’s a rambunctious, ramshackle special that happened simply because it could, because what other artist can pull RuPaul, Elton John, and the Muppets into one TV block for no other reason than why not? If Artpop is a monument to the rowdy, sloppy excesses of fame, Lady Gaga and The Muppets Holiday Spectacular is the greasy leftovers reheated once everyone’s gone home. It’s nothing especially stimulating, it pushes no boundaries or envelopes, but it’s something to watch, because Lady Gaga is someone to watch. She’s a spectacle, and this holiday season, we should all be tuning in.