Flume: Under the Skin 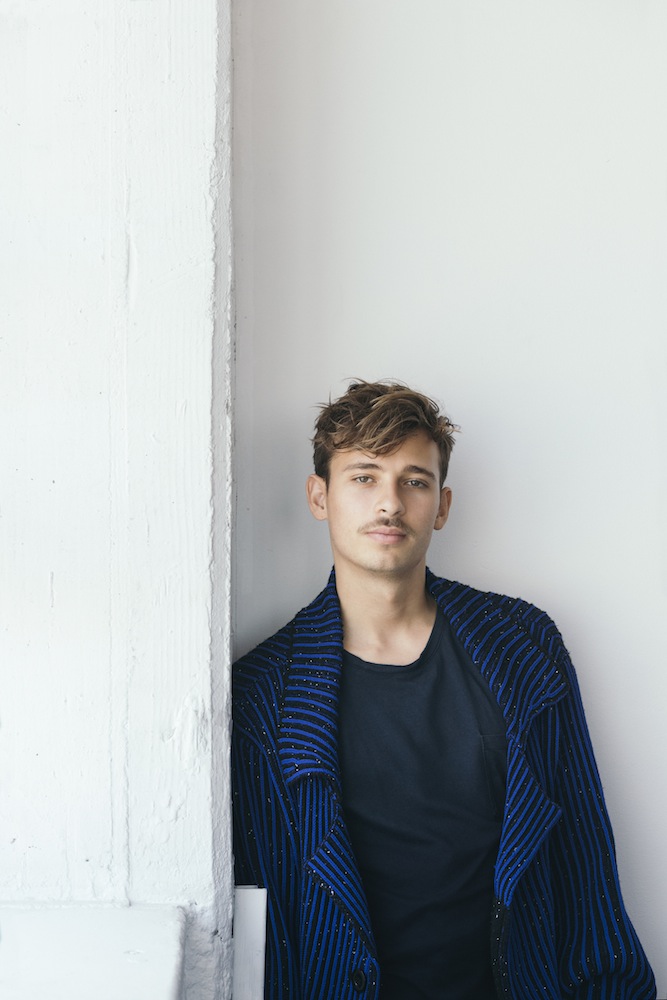 Harley Streten, the 24-year-old producer and musical artist who you likely know by the name Flume, discovered music through a cereal box. “I was nine and I was shopping in a supermarket with my dad,” Streten recalls. “There was this cereal and it had a special promotion with a CD inside the box that had a really simple music-making program on it. I got it and that opened my mind to being able to make music on a computer and seeing all the different layers.”

His cardboard box beginnings have proved fruitful. Streten continued to make music as a teen, upgrading to other mixing programs over the years, and in 2011—after submitting songs to a Future Classic competition—released his debut EP Sleepless (Future Classic). It’s title track is an airy take on the head-bobbing, sampling distortions of J Dilla and Flying Lotus, and set the tone for his self-titled LP in 2012. While he was only 21 at the time of Flume‘s release, the album was critically acclaimed and launched Streten into recognition across the internet and airwaves. Its much-anticipated follow up, Skin (Future Classic), came out in May, and its upbeat, candy coated EDM tracks (“Never Be Like You” and “Say It”) were met with commercial success and crowded concerts.

Flume is in the midst of a world tour, playing at arenas and stadiums alike. We spoke over the phone before his performance at Red Rocks in Colorado, and discussed meditation, sound design, and the fear of a sophomore slump. This Saturday, he will perform at Forest Hills Stadium in New York.

FLUME: It’s going good. We just had a really intense period of three shows in Seattle and then four shows at the Shrine [Expo Center] in L.A., then one in San Diego. It’s been a pretty crazy time. I’ve actually been a bit sick. We’re currently in Red Rocks. I’m just sitting back in the dressing room by the rocks.

FLUME: My parents used to play me this album when I couldn’t go to sleep. It was called Deep Forest. I think it was a self-titled record. It’s actually still one of my favorite albums of all time. It’s kind of like these American guys went to Africa and recorded all local music and mixed it with new age. The production was cutting edge for the ’90s back then. They made some beautiful music.

SAPIENZA: Do you remember the first song you ever made?

FLUME: I made a lot of shit songs, so many terrible songs. I don’t remember the first exact one. It would have been on the music-making app from the cereal. I had that, then I got this program called eJay, then I had ACID Pro, then eventually I found FruityLoops and Reason. I was trying out all of this different, less complicated stuff out there.

SAPIENZA: What did your family think of you getting into making music?

FLUME: Dad was always super supportive. I often needed better computers to run the software. He’d always tell me that if I buy a new computer he’d pay for it, but then I’d pay him back. He never really asked for the money though. [laughs] Around when I left school and I was just fucking around, working some part time jobs, I was like, “Damn, I got to put my head down and make this work if I want to make some money off it.”

SAPIENZA: Were they surprised when you took off or did they always think you’d make it?

FLUME: [laughs] They were definitely surprised. It was funny though because one time I got like 100,000 plays on SoundCloud on one song. I couldn’t believe it. I told my mom, “Mom, look! I got hundreds of plays on this song! How crazy is that?” She didn’t really get what that meant. Then she saw me in the local newspaper in the tiniest, little font playing some show and she thought was the coolest thing ever. It was funny to me. Online I was really getting traction at that time. At one stage though my mom was trying to get me to go to university—which was probably the smart move—but I ended up with a lucky break. Fortunately they were into it.

SAPIENZA: Do you remember your first professional gig?

FLUME: I did a few DJ gigs at empty clubs, sort of as a warm-up set before Flume was a thing. I did one when I got big enough and I had five friends come down and they were the only ones dancing. That was one of my earliest ones. I was super nervous. It was mind-boggling to me that people could follow it online and know who I was. It’s quite crazy since I was a just kid in high school. I was working at a news agency at the time, selling newspapers and lottery tickets.

SAPIENZA: What was it like when you first got discovered? You won a contest, right?

FLUME: Yeah. I sent some demos to Nathan McLay at Future Classic, which is the record label I’m with and they manage me as well. They had a competition going to just send in your demos. The winner would get editing instruments, a sample library, and a contract out of it. I sent him my stuff and I didn’t think my music was that good. It had been on my hard drive for over a year. It was “Sleepless” and a couple of other tracks. They seemed to dig it. I didn’t actually win the contest. I came in second but I got the track out of it. It gradually snowballed ever since then. That was in 2011 when I signed up. It’s cool—Nathan and Chad Gillard, who’s also at Future Classic, are here tonight. We’re super tight, like family vibes.

FLUME: The best ones usually start with concepts. Recently I wrote a beat and the concept was I really wanted it to be rave-y. I had this idea of stretching sound. It’s kind of hard to describe. I had a sound design concept or a way of using synths in a strange way or auto-tuning it—like a technical experiment. I was excited about that, and that usually spurs more songwriting elements to come in, like the chords and melodies. Then there are other times where it’s straight up chord progression or sample or drum beat. I think the best ones are the concept. Sometimes the concept is like, “Alright, I want to write the angriest piece of music I can, then halfway through it’s going to change to the most beautiful, ethereal chord progression ever.”

SAPIENZA: When you say stretching sound do you mean something like “Wall Fuck”?

FLUME: Yes, exactly! “Wall Fuck” was one where I wanted to write a song where it has sounds tearing up the universe—sounds that are so hard to describe, where you don’t know what it is. To me it’s all about textures, and that’s the side of music that I’m finding really exciting. I feel like it’s one of the only parts of music that mankind hasn’t fully discovered yet. When it comes to chords and progressions and melodies and songwriting structures, they’ve been around for thousands and thousands of years. Some of the sounds on “Wall Fuck” haven’t been able to be humanly created [until recently]. Combining sounds that are from another universe with the classic songwriting structures never gets old for me.

SAPIENZA: Was there anyone you collaborated with who surprised you with how they approached your song?

FLUME: I would say Beck. We ended up with something that sounded quite different from what we started with. I’ve never been sent quite as many harmonies and layers. We did a bunch of it remotely and we were going back and forth a few times. One of the times he sent me 100 files of his voice. He made this beautiful chord progression and harmonies. I couldn’t believe how good he was at just doing so many layers. It was so pro.

SAPIENZA: Why did you choose the title Skin? Do you think there’s a theme throughout the album?

FLUME: I didn’t feel like there was a theme. There were definitely ups and downs creatively. There were some times where I worried about being good—as people will do when you’re making your second record. I liked the idea of skin because it’s super weird and a little unsettling, like an organism. But at the same time skin is intimate and personal and organic, and that’s what I want the music to be. At first it’s a little uncomfortable and jarring, but I want it to feel intimate and personal. I want it to feel like it’s alive.

SAPIENZA: Were you able to escape that fear of the sophomore slump?

FLUME: I was able to escape, and those moments were when I made the record. There were moments where I had so much writer’s block. I put so much pressure on myself emotionally. There were a lot of people I wanted to please and make this as good as it could be. I feel like that’s not too healthy of a way to be creative, to be thinking like that. I just figured out a way to unlock my mind and be creative. This album was really a process for me with that. I even took up meditation. I’m really happy with the way it sounds and the way it came out. I’m glad I took my time with it. I wanted to get it right.

SAPIENZA: Is meditation one of the surefire things you do to get around writer’s block?

FLUME: Yeah. Meditation is a really powerful tool I have for life now. The only reason I know about it is because I was stressing about writing and a friend taught me it. It’s been useful. Now I use it for a bunch of different situations, whether I’m stressing before a show or something in the day really pisses me off. I’m now much more aware of my mental state. I have a lot more control over it and can choose how I feel.

SAPIENZA: How do you feel about being so successful so young and having it come on so quickly? Do you wish you had more time to adjust?

FLUME: No, I’m loving it. I just hope I can sustain it. That’s the important thing to do. I feel like I’ve gotten to a point where I don’t know if it can get much bigger. I’ve been climbing and I feel very happy. I don’t feel like I need to be on the biggest stages in the world but I’ve sold out Red Rocks and that’s fucking awesome. I’ve loved playing these sized places too. Arenas, for me, have a different energy. I’m happy doing this and not doing parties as much. It’s one of the first times where I feel like I’ve gotten older. I can see it in my face. [laughs] Touring makes you feel that way.

SAPIENZA: Where do you see your sound progressing?

FLUME: I think currently I’m going towards more strange sounds and less songwriting. The first record for me was figuring out what Flume was. After that came out I feel like people took a note from me and I didn’t feel comfortable doing that again. I wanted to mess with it with Skin and embrace sounds I didn’t have access to before. I want to do more sound design and strange textures, but stuff that’s really melodic as well.

FLUME WILL PERFORM AT FOREST HILLS STADIUM IN NEW YORK THIS SATURDAY, AUGUST 27, 2016. FOR MORE ON FLUME, VISIT HIS WEBSITE.