Who the Fuck Is Chip Chrome? 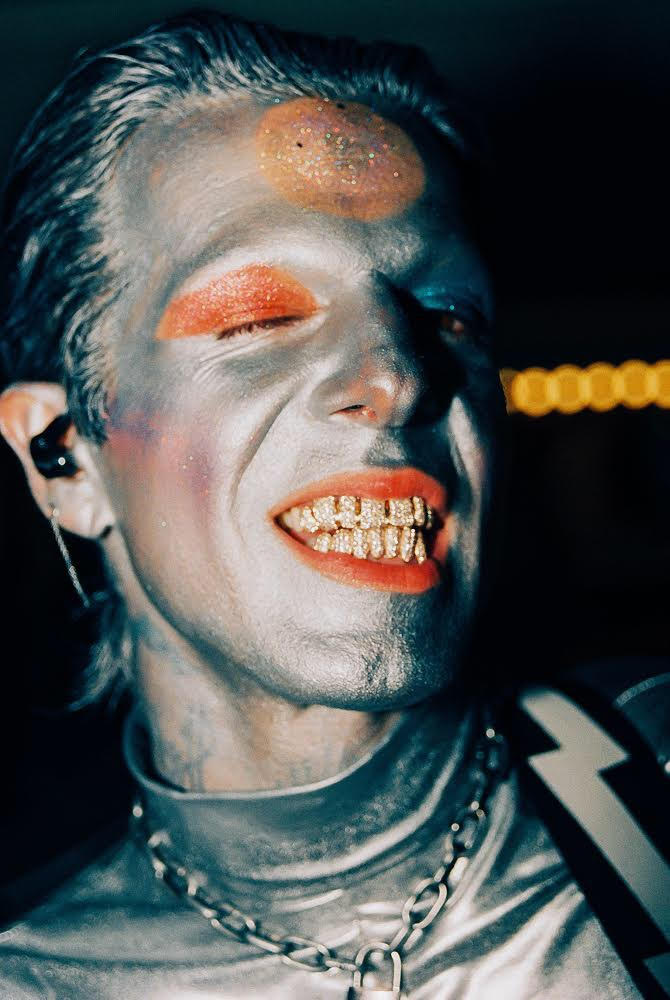 All photos by Alex McDonnell.

The mercurial Chip is the latest persona of 28-year-old Jesse Rutherford, the frontman of SoCal alternative rock-pop-R&B band (yes, all three) The Neighbourhood. With 2013’s Billboard chart-topper “Sweater Weather” in the bag, the group has since put its range—and the fidelity of its fan base—to the test, racking up four albums, a mixtape, a robust touring schedule, and collaborators from YG and Denzel Curry to Lana Del Rey.

Rutherford himself is a masterclass (sans paywall) in casting a wide net. He raps, he sings, he plays guitar, with serious sartorial aptitude to boot—enough to make Tiffany & Co. charm necklaces even remotely interesting. Upon release of his 2019 solo project, GARAGEB&, Rutherford took to Instagram, noting that 10 of the album’s 12 tracks were created on the GarageBand app after he decided to use his phone “for purposes other than social media.” Last week, he took the concept a step further by deactivating his Instagram, upon which he cultivated his extraterrestrial vision gone Luddite Lite. Chip Chrome may be the future of The Neighbourhood, but he’s definitely not online.

LILY PATTERSON: Where the fuck is Chip Chrome? I noticed you deactivated your Instagram.

JESSE RUTHERFORD: [Laughs] I like that you turned the “who” to “where.”

PATTERSON: [Laughs] Oh my god, I was like, “Did I say that clearly?” But yeah, you’re channeling an icon. Tell me about bringing Chip to life.

RUTHERFORD: I’ve had the idea for Chip for about two and a half years.

PATTERSON: So it’s been baking.

RUTHERFORD: Yeah, I had the name, the whole shit. Obviously, Bowie is a giant reference… Ugh, I hate that word. A giant inspiration. It’s funny; when I was a kid, people would tell me about him, but I wasn’t really interested. I was gravitating toward hip-hop or modern pop. First, I got really into interviews and just watched the man talk. Then the music. I’ve always been an in-between kind of fella. I’m not quite this, I’m not quite that. I’m not super masc, I’m not super feminine … I’m kind of a confused person, to be honest with you. Bowie has helped me route. Like, here you go, this is a blueprint, an architecture. Not to say I sound like him at all.

PATTERSON: You deployed @chipchrome on Instagram, a platform that’s created so much anxiety around being “real,” being consistent, endlessly delivering your personal brand. And now Chip’s off the grid.

RUTHERFORD: I’m trying to figure out myself in all of this. Maybe I’m expected to have already done that, but I haven’t. I feel like I turned into a “thing” on the Internet. When you work on a piece of music for a long time, you post it, and it gets X amount of likes, then you post a picture with your girlfriend and it gets X amount… It’s just a weird, challenging, confusing feeling. I feel like there’s an opportunity to get off the platform, or at least try it this way.

PATTERSON: How many months ago did you debut Chip? August?

RUTHERFORD: Yes. I killed @jesserutherford when I turned 27. Dead at 27.

RUTHERFORD: Exactly. It’s this ridiculous motif. Really, I want to have fun with this stuff, play with it. Like, yo, nobody paints themselves silver, throws on a Spandex suit and a grill. Then, of course, Kanye West comes along…

RUTHERFORD: Bowie passed and everyone started to think about him again, riff on him. But no one was taking it to the full Ziggy extreme! There’s a Tekashi69 out there but no Ziggy Stardust? C’mon. It feels comfortable for me. I’m having fun. PATTERSON: Can you describe the physical process to go full Chip? Side note: I saw a picture of that reflective Marine Serre balaclava you scored recently. Insane.

RUTHERFORD: The makeup itself isn’t too long of a process. I’ve always done it myself. Actually, I have a friend of mine who rips at makeup, Sydney, @sydn4sty on Instagram—

RUTHERFORD: She’s bomb. Me and Dev [Devon Carlson, Rutherford’s partner] met her, she was our neighbor at an apartment we lived at a bit ago. She came over, fucked around and helped me with an eye design. For the most part, though, I’ve always done it on my own. We did a tour recently, and I’d usually start an hour before the show, giving myself time to get in the headspace. I could turn into Chip in 25 minutes. It doesn’t take that long.

PATTERSON: What about the suit?

RUTHERFORD: The silver suit is a stupid Spandex suit from the boulevard. I just ended up going into one of those places, figuring out a suit that worked there. Taking measurements and shit, getting the sizing right.

RUTHERFORD: I premiered Chip at a B-level, crusty, Hollywood, kind of spaghetti Western-y place. Which felt right. But as you can see—you referenced the top Dev got for me—there’s so much opportunity for Chip to grow visually. When we [The Neighbourhood] go on tour later this year, I want to develop this. But there’s also something about the campiness, this B-level visual, that I really like. It feels authentic to me.

PATTERSON: All in a time when people are hiring stylists for their hotel-lobby-to-car looks.

PATTERSON: I feel like the DIY, the physical process of putting yourself together imbues a certain energy, a sort of leveling with your audience.

RUTHERFORD: Right. Thanks so much for noticing.

PATTERSON: Is Chip working its way into your solo act? Or do you think you’ll reserve it for The Neighbourhood?

RUTHERFORD: It was gonna be its own thing. I had no intention of bringing Chip into The Neighbourhood. It sounds corny, but the reason I wanted to do Chip for The Neighbourhood is—I don’t know if you’ve heard our song, “Middle of Somewhere.”

PATTERSON: I did. I watched the video.

RUTHERFORD: That song is a special one to me. I wanted to make sure that I could attach something to it that would make people stop, look, and have to listen. We were gonna do a textural video, like B-roll footage, Super 8, nature-y. I wake up in the morning, and I go to the house we’re recording at, in Coldwater Canyon. Before our director Alex got there I was sitting in the house, looking across the canyon over on this hill, and I actually had a vision of the chrome fuckin’ thing on top of the hill. So I showed up the next day in full Chip regalia, and everyone looked at me like, “Oh, no…”

PATTERSON: [Laughs] So that was the first introduction between Chip and The Neighbourhood, when you made it a part of the universe.

RUTHERFORD: It was, yeah. Actually, this producer duo called Take a Daytrip–they did that Sheck Wes song [“Mo Bamba”], “Panini” by Lil Nas X–they’re doing so well. I’ve known them for a long time. They’ve always sent me beat packs and I’ll just go through, pick ten at a time. I thought Chip was going to be leaning more toward my hip-hop shit.

PATTERSON: Yeah, if you’d gone through with Chip as an independent project, how would it sound?

RUTHERFORD: End of 2017, me and my engineer, Danny, were in the studio, going off on Chip. If you ask my friends, they heard about Chip so long ago, they’re like wow, you actually did it! Chip was going to be hip-hop.

RUTHERFORD: Hip-hop music has been my programming. It’s been my love. When I was a kid, hearing Eminem, G-Unit for the first time, I was like… Bro, that is it. I don’t know if you know where I’m from, Newbury Park—

RUTHERFORD: Yeah, yeah. I was kind of the odd one out, in my neighborhood, my area, obsessed with rap. I decided to stick with the guitar, and I fell in love with it, not having to use so many goddamn words. In fact, I don’t want Chip to talk, because Jesse talks enough. It’s all in the song, that’s where I’m gonna leave it. And “Middle of Somewhere” is a good jumping off point. That’s probably the purest sound you’re gonna hear; it’s just me and a guitar. I’ve been really into Dolly Parton lately—

PATTERSON: She’s having a revival moment with us younger gens!

RUTHERFORD: She’s a great reference for what I’m doing, because Dolly will tell you, “Yeah, I don’t give a fuck if you think I’m fake on the outside, because I am! That’s what I wanna look like. And that’s fine, because I know what’s coming out of me is more real than anything. So I don’t have to worry about that.” PATTERSON: People are gonna assume they know what Chip’s about; i.e. my questions about the Ziggy comparisons or the visual continuity with Daytrip’s sound. But the far-out visual is paired back to a fairly stripped sound.

RUTHERFORD: Exactly. It’s not what people are expecting. Right now, Chip’s dedicated to The Neighbourhood. The project is gonna be called—there might be a change—but right now it’s called Chip Chrome and the Monotones. The boys, the way we all look together… They’re shadows, they’re silhouettes.

RUTHERFORD: For the most part, I’m the only one who has to say something to express what we collectively feel. So if I say something they’re not into, they tell me. I mean, there’s two thousand songs the world won’t hear because we all didn’t agree. It’s working, though. When I first showed up as Chip, everyone was like “what the fuck are you doing?” Now that we’ve worked on the context, everyone’s down.

PATTERSON: Final question, easily the lamest. Will Jesse/Chip find their way back to Instagram?

RUTHERFORD: I guess I’ll say I don’t know. I’m only a couple weeks off.

RUTHERFORD: I mean, you know… I’m going through it a bit.

PATTERSON: It’s a hell of a drug. You ingest it, but it can also completely consume you.

RUTHERFORD: Comparing myself to everything, everyone, everybody I love… You can’t look at humans like that. I don’t want to think about what everyone else is doing. I feel my creativity pumping back up again. I mean, I have the queen of social media sleeping in the bed next to me. And it’s the coolest thing ever, the way Devon does it? That’s the way you gotta do it. Not work for it, but make it work for you. And that’s cool, that’s her thing, it doesn’t have to be my thing. Luckily, if I do want to come back…

PATTERSON: It’s all gonna be there.

RUTHERFORD: The weirdest twist to it all—which I love, which is wonderful—is that I get off of it, and a week later I get an email that Lily from Interview fuckin’ Magazine… I mean, it’s Interview Magazine! If that isn’t a sign to pay attention, then I’m an asshole and I need to recalibrate my vision.