By Andy Warhol and Bob Colacello On Second Thought offers iconic subjects the rare chance to revisit an interview from our archives, and reckon with the good and the bad of it. In this edition we sit down with Tatum O’Neal, the youngest Oscar winner in history.

The youngest Oscar winner in history revisits—and revises—the things she said in her third cover story for this magazine, when she was just 16. 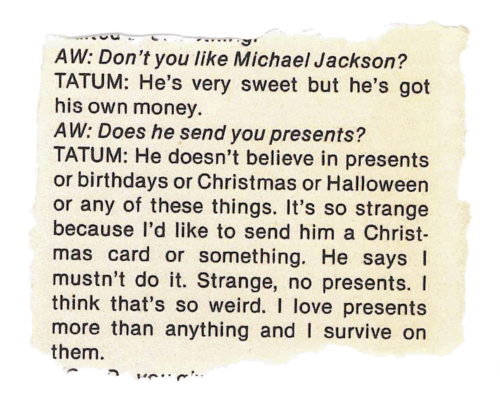 TATUM O’NEAL: That is fucking unreal. He was [raised as] a Jehovah’s Witness, and they don’t believe in [holidays]. I hadn’t hurt his feelings yet—there was a whole thing between he and I. I truly loved Michael Jackson. He was one of the great artists of our time, but fame does a lot of damage.

O’NEAL: I’ve done a lot of television since then. Back in the ’70s, television was like ‘No way.’ It was another world. At least that’s what I was taught.

O’NEAL: Madonna gave me her trainer, Rob Parr, and I ended up becoming an obsessive runner to the point now that I’ve had surgeries on my knees, so, thank you, Madonna.

O’NEAL: I so did not. I still went. I went with Michael Jackson.

O’NEAL: I could fill your whole magazine with Richard Burton stories. He was the most magical motherfucking actor who wore a different pair of new red socks every single day. He could recite any poem by heart and called me the Beatrice to his Dante. He was only allowed to drink red wine on the movie because his liver was talking to him. He died about a couple of years later, and they didn’t fucking invite me to his funeral. O’NEAL: I wouldn’t call John McEnroe an intellectual, per se, but he is certainly handsome and we made some incredible babies. Unfortunately it didn’t work out, but I think I did the right thing and married well. O’NEAL: I’m not a workaholic. I think what happened is that I did so many interviews after Paper Moon [1973] came out that I learned how to give these rote answers. I had heard Dad [Ryan O’Neal] or Farrah [Fawcett] say it in interviews, so I did too. A lot of what I said is true, and some of it is just what I thought I should say.

O’NEAL: Oh my god, I sound so obnoxious. I know how to put on makeup. My dad was with the most suave and beautiful women in the world. Anjelica Huston lived with us, an she knew how to do extraordinary makeup. Lauren Hutton once told me, ‘You don’t put lipstick on the outside of your mouth. You put it on the inside and then it rubs out.’ Bianca Jagger told me to put on makeup and then take a bath. It makes it look glowy.