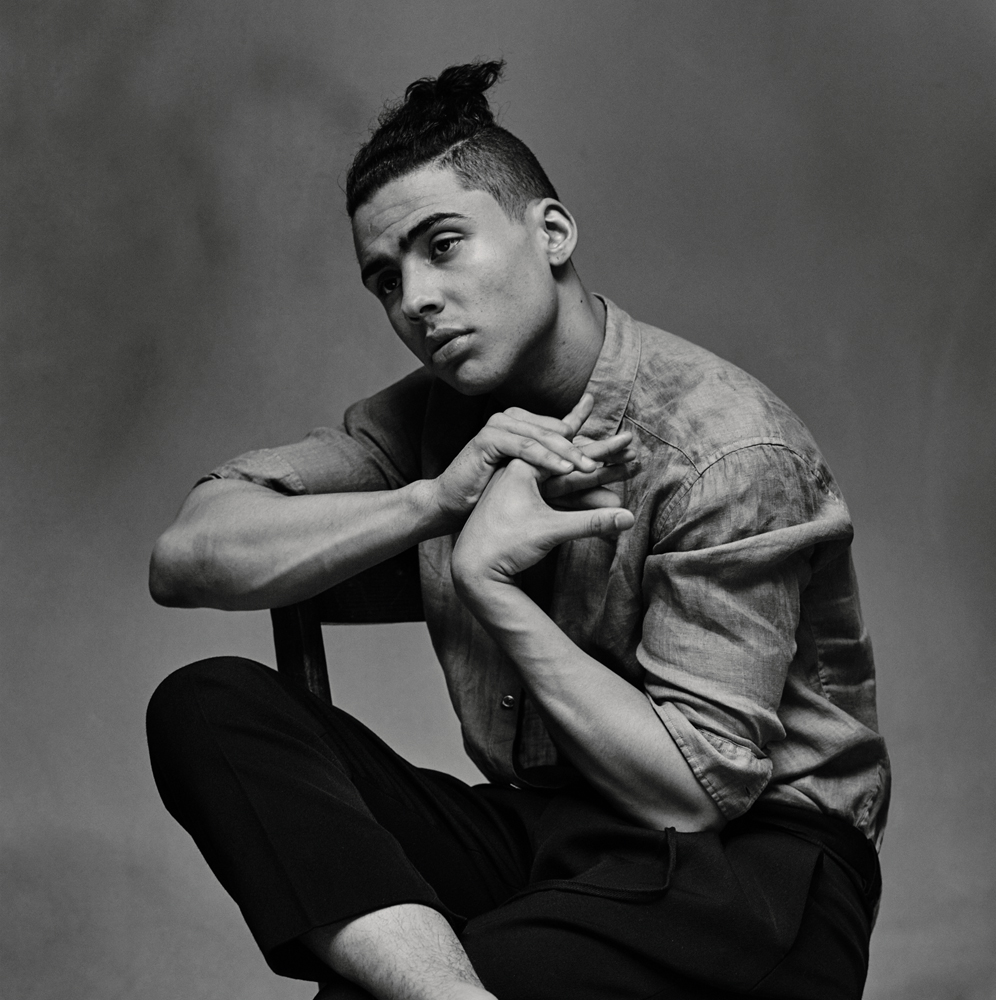 Quincy Brown, son of ’80s R&B singer Al B. Sure! and model Kim Porter, and adoptive son of Sean “Diddy” Combs, isn’t embarrassed about his episode of MTV’s My Super Sweet Sixteen. “I remember, when it was happening, I was a happy kid. It was the time of my life,” the 24-year-old actor and musician says. “Everything in the past is the step, step, step to where I am today. I don’t look back at things in embarrassment; it’s more like, ‘Damn, I’ve grown so much from that.’ ” Named after his godfather, the legendary producer Quincy Jones, Brown grew up playing baseball and dreaming of playing for the University of Miami Hurricanes and in the major leagues. In his junior year of high school, however, he had to readjust his future plans. “Because my family moved so much and I went to different schools, I was ineligible to play sports,” he says. “Once I had all that free time, I started devoting it to music and acting.”

Brown takes his chosen professions seriously. As an actor, he’s studied with famed acting coaches Aaron Speiser (Will Smith, the Wayans brothers) and Richard Lawson (Michael Peña, Giovanni Ribisi), and has taken classes at Playhouse West and the Groundlings. In January, the film Dope, in which he plays a wealthy Los Angeles teenager with unintentionally hilarious “Straight Outta Compton” pretensions, received a Special Jury Award at the Sundance Film Festival. In April, he had his first central role in the teen drama Brotherly Love. When it comes to music, Quincy is reluctant to release an album prematurely. “I want to perfect my craft a little bit before I present myself,” he says.

EMMA BROWN: How did you get involved with Dope?

QUINCY BROWN: I’m just another actor out in L.A. trying to move jobs. When they were casting the film they reached out. Originally I went up for Dom, which is A$AP [Rocky]’s character, which he played amazingly. Then me being light skinned and kind of pretty boy-looking they were like, “Ehh, it would be forced.” I didn’t hear back and I was like, “Oh, it’s okay, didn’t get it. Just another of those auditions that wasn’t for you.” Four or five months later they hit me back up and then they were like, “You have an audition for Dope” and I was like, “What? I went out for this. Are you sure this is the right thing?”  “Oh, this is for a different role.” Then I was supposed to go in for a callback and I pulled up expecting to read with the casting director and it was the director. He hand me the script and said, “Hi, Jaleel.” I was like, “Oh shit.” I was really excited.

EMMA BROWN: Did you know any of the other cast members before?

QUINCY BROWN: I knew Kiersey [Clemons]; I had met her through mutual friends. Shamiek [Moore] I met for the first time. I know A$AP just through the industry. Chanel [Iman], who plays my sister, I actually knew for a couple of years. That was fun. It was her first time acting and I got a chance to help her a little bit. She did a phenomenal job.

EMMA BROWN: Did you know she was going to play your sister?

QUINCY BROWN: No, that actually happened literally the day before. We had started filming already. It was, like, Tuesday and the scene with my sister at the house was Thursday. Tuesday went by and Wednesday went by, and originally there was supposed to be another actor for her and then it wasn’t on the call sheet. I was like, “Is this still in play?” Luckily Chanel was in L.A. and she had read for it before and she showed up the next day.

EMMA BROWN: Which came first for you, music or acting?

QUINCY BROWN: I think music was first just because it was so next-door. My dad being who he is, I was always in the studio. Every producer he would work with, I would let them know, “I like music.” The next thing you know they were like, “I’ll send you some beats.” Of course starting out, it’s really not knowing too much of what you are doing. But it takes a lot of that not knowing to teach yourself and grow into yourself as an artist.

EMMA BROWN: Did you begin rapping?

QUINCY BROWN: I think the rapping came from being around your friends in school, beating on the desks with pencils and making beats and freestyling about the teacher. And it was jokes, jokes, jokes, until I was freestyling in such a good way that it became serious. I applied that to just me BS’ing in my room, listening to my beats, and I was able to become a writer off of my freestyling. I would hear something and I would start singing. I would record it and go back and listen to it. From that I would pick, “Oh, this is good for the song.”

EMMA BROWN: So now you are more of a singer.

QUINCY BROWN: Now I am more of a singer. I’ve gotten vocal coaching. I always knew I had some type of singing ability, I just didn’t know how to use my voice. I wasn’t comfortable. I work with a couple of vocal coaches in L.A.—one named Romeo Johnson, who used to work on The Voice and now is in the music department at USC. Another guy named Stevie Mackey. He is a beast. He works with Selena [Gomez], he works with J.Lo. Getting that extra help set me in a comfort level. With somebody like Steve, he really listens. He wasn’t teaching me how to sing like him, he would do things so you can explore your voice first and then he will know how to train your voice.

EMMA BROWN: Have you ever had a horrendously bad audition?

QUINCY BROWN: I’ve had a couple. We can say many. Sometimes I might study too much and I really didn’t think that was possible. [Sometimes] you get to the audition room and everything that you studied isn’t there at all—sometimes you just black out. Let’s say I’ve been to 20 auditions, I’ve had four blackouts. It gets embarrassing. Sometimes it happens, but it’s normal. Once I got to the point where I was like, “Okay, this happens. I know this happens, I didn’t mess it up to the point where it I can’t redo it.” Now, if I mess it up, I’ll go back, put myself on tape, and try and make up for it.

QUINCY BROWN: Probably I will stop taking classes, but I’ll never stop the coaching. With the classes, there’s a starting ground and you really never finish. You start with the techniques and then you go to the scene study and then the advanced scene study. Doing those can always keep you fresh. But I’m being looked at as more of an actor now that I have stuff coming out and I have to be on point every time—no more horrendous auditions. So I’ve got to get my coaching, and that is always needed. No one should ever be trying to dodge the help. The help is always wanted and necessary.

EMMA BROWN: Who is an actor who you really admire—who you think, “If I could have their career, that would be perfect.”

QUINCY BROWN: The Rock. Dwayne Johnson. He’s my hero. He’s my favorite person in the word. I think if I had to immediately pack my bag and become someone’s life, [it would] absolutely be The Rock. I was a wrestling fanatic and when he moved on to acting, that was a huge thing for me. [I realized] I still wanted to be like him. It wasn’t even about wrestling; it was about him as a person.

EMMA BROWN: Have you ever met The Rock or gotten star-struck by anyone you’ve met?

QUINCY BROWN: I met The Rock very briefly a couple of times. Each times was just crazy. I never got a picture because we were around such professional settings—I was like, “Damn. Nobody is asking for pictures and so I can’t ask for pictures.” But I wanted one. I was recording myself and kind of got him in the background at the Grammys, I think in 2011. I got a clip of him, so he’ll be in my documentary. But I think being around Jay Z and Beyoncé, those are definitely star-struck people. And Denzel. Denzel has such a warm spirit, too. I’m close with his family. Every time I see him, he’s so regular, it’s like, “Do you know who you are? Do you know all the stuff you’ve done?” [laughs] I’m just sitting there like, “Stop. You’re not regular.”

EMMA BROWN: You said you’re ready to start working on another movie, what’s your plan for the immediate future?