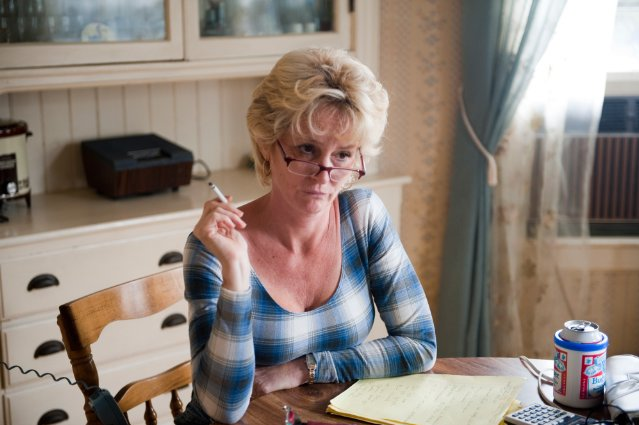 Two years after Frozen River, her breakout film, the ever-industrious Melissa Leo plays yet another challenging and intriguing woman: Alice Ward, the brazen and destructive mother of Mark Wahlberg’s boxer in The Fighter. The performance is so intriguing that it seems churlish to note that The Fighter could bring Leo further awards attention. She received her first-ever Golden Globe nomination a day before we spoke about the challenges of acting, from the anxiety of influence to knowing what to do with your cigarette.

DANIEL D’ADDARIO: I guess I should start by congratulating you on this week’s news—your Golden Globe nomination. How great!

D’ADDARIO: And you’ve been through this process recently, with Frozen River. Do you enjoy the process? It seems like a lot of work.

LEO: Well, yes. You’re not wrong about that; there’s certainly a lot of travel involved in it. I’ve got a job I’m in the middle of, too, so I keep on having to get back to New Orleans. I do find that getting down here, on the set of Treme, I feel a little more comfortable and relaxed, doing what I know and love to do. I haven’t had too much opportunity to do the marketing, and the very shiny golden path of recognition that has yet to open, so it’s something I greet warmly, if awkwardly.

D’ADDARIO: Is it harder to create a character in a movie, where you have much more limited time with which to work, or on a TV show, where you get to spread it out over episodes?

LEO: You can’t really gauge the difficulties. There’s difficulties and joys that happen with an amazing, great team, when one is working. Television can be a very frustrating job for almost anybody working in television, because you’re shooting episodically, and you don’t know one scene from the next, and maybe they change around. One of the great joys and fascinating things of working with David Simon and his team of incredible writers and filmmakers down here is that there is a continuousness to the episodes as I’ve never witnessed before in television. And those, that landing of specifics is what I really like to sink my teeth into. So this is such a great job because not knowing what’s going to happen to Toni Bernette makes it so like life. In film, there’s a difference.

D’ADDARIO: Speaking of specifics, I know a lot of your work is really rooted in place, whether it’s New Orleans, upstate New York, or now Boston. Do you have to research accent and regional difference, even just the way people carry themselves?

LEO: Yeah, all of those things are really, really vital. This fall, I had three films come out, two of which took place outside of the Boston, Massachusetts area. Conviction we shot in Michigan. And that—to get the dialect, and the tone, and the feel of the people—was a further reach. So, if you wanted to be reminded constantly of that Boston sound, you actually heard this other, unfamiliar Michigan sound. There’s a great value in The Fighter being shot in Lowell. There’s a very thick accent in that part of the world and with that family in particular, and the Ward-Eklunds were there and talking to us all the time, and with each job, there’s a different way to address it, whether it’s an exciting part of the work that you really have to do with the other actors to keep in the period or the accent or any of those kinds of specifics, and other times it’s—shooting with Todd Haynes on Mildred Pierce, which will come out next spring on HBO…

LEO: The world that he, and people like Ann Roth, the costume designer, put together, would be the ’30s into the ’40s in this country, Southern California. We shot it in New York, it was astonishing how we created something where we, the actors on the set, believed that we were not only in a different locale from where we were, but also a different time.

D’ADDARIO: And how does that bleed into your real life? I was thinking about your very distinctive hair in this movie…

D’ADDARIO: That’s very different from hair I’ve seen you with in past movies or awards season or whatever—how did that affect your life, walking around with those thick highlights?

LEO: Oh, it’s funny. There’s a very interesting story about hair and what it does for a girl. I’m a natural redhead, I have been and still am today. Right now, I have, after a couple of years, my own color back, with about ten white hairs up there too.

LEO: One time, many, many years ago, I had the opportunity to dye my hair brunette for a film. And the day I walked out of the hotel where I had it done, I walked out onto the street and realized people looked me in the eye and greeted me good morning. I’d never had that experience before! And I began to notice that a brunette is treated as an affable human being. Later, when I dyed my hair for Lois Riley [in 2010’s Welcome to the Rileys] blonde, and then Alice Ward blonde, people come right up to you, they touch you on the arm, they ask you how you’re doing. Men and women both! Blondes have more fun.

D’ADDARIO: We should investigate this. Another choice you make, with both this character and your character in Frozen River, is that they smoke. I know you see it less in movies now—is there a secret to onscreen smoking?

LEO: Okay. Smoking onscreen. I am a smoker, I’m ashamed to say. I had given it up for many years, then picked it up again. It’s a horrible habit. I struggle with myself all the time. And I love to smoke. An actor has to be very, very careful, as one of the most wonderful props—and actors love props—is a cigarette. There’s so much to do with it: you can bring it up to your face, play with the smoke. It’s just the greatest—ever since I was 16 and in acting school in England, I’ve been playing around with cigarettes.

D’ADDARIO: Was it hard being on a shoot where men punched each other all day long, and there was so much visceral emotion?

LEO: No—what’s easy is hard and what’s hard is easy. As actors, that’s the sand in the sandbox for us. Without emotion, there’s nothing to play—and we are playing. We know that. Whether you think we do or not, we know that. The emotion is one thing, right—how did I react to all those fights? I have no idea. I wasn’t terribly present. You really never knew if the camera was on you or not, and it was early in shooting, and it was a great opportunity for all of us to stay in character all afternoon while David shot what he needed and Mark and the other guys did this extraordinary display of boxing again and again and again and again.

D’ADDARIO: I read recently that you don’t watch many movies or read many magazines or books—what do you do in your downtime when you’re not shooting or working?

LEO: I spend a lot of time by myself. I’m not on the phone a lot unless something extraordinary—like this opening of The Fighter and this response to it—is going on. I have some close friends I keep in touch with. I knit. I watch a little too much TV. I ski, if the weather’s right for that. If I can find a group of buddies, I go rock climbing.

D’ADDARIO: Do you draw inspiration from anything to play your characters if you don’t watch other performers?

LEO: I feel that might get in my way. There is a wealth of knowledge to be understood from others’ work, don’t get me wrong, and when I do stumble upon others’ work, it’s not lost on me. But I remember everything I’ve seen, because I’ve trained my brain, and so then, when I come to something—many years ago, I had the great pleasure of playing Sara Melody in the play “A Touch of the Poet.” And I got a letter after that performance at the Long Wharf theater, and someone from the college there had written and said they’d been studying this era of playwriting for many, many, many years, and seen many, many, many productions of this play, and never understood Sara Melody until she’d seen me play her. Now, I don’t know what I did as Sara Melody, but I know I didn’t know anything about it going in.

THE FIGHTER IS OUT IN WIDE RELEASE TODAY.