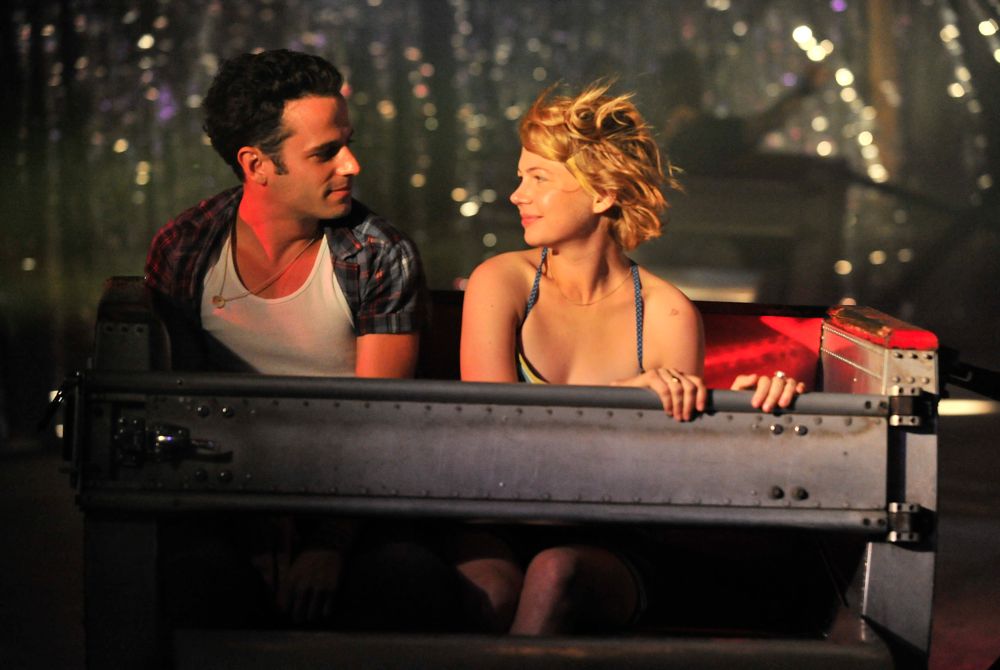 ABOVE: LUKE KIRBY AND MICHELLE WILLIAMS IN TAKE THIS WALTZ. IMAGE COURTESY OF MAGNOLIA PICTURES.

Luke Kirby has two very different films coming out in the next few weeks. As of tomorrow, you can watch the Toronto-born, Brooklyn-based actor terrorize Samuel L. Jackson in the thriller, The Samaritan. If you’ve been following the festival circuit (or our Trailer Face-Offs) you’ll already recognize Kirby as Michelle William’s other man in the indie romance Take this Waltz, which also stars Seth Rogen and Sarah Silverman. Having watched the two films in succession, we sort of imagine Kirby’s two characters as identical twins in a Stephen King novel: the deranged, The Samaritan villain, Ethan, as the evil twin, and the more emotionally in-tune, rickshaw-wielding Take This Waltz artist Daniel as the good twin. For this reason, we do not suggest watching the two films in succession.

We telephoned Kirby in far away Brooklyn to discuss both films, what he’s been doing since filming wrapped, and what he plans to do next.

EMMA BROWN: I just saw Take This Waltz and The Samaritan, and I wanted to ask you some questions about both of them. With Take This Waltz, what, in your opinion, did Daniel think would come of his friendship with Margot?

LUKE KIRBY: I don’t think that Daniel really has a strong sense of where it’s going. I don’t think that he’s motivated by anything with Margot that can really be intellectualized. I think that he feels so quickly caught up in something, like some die is cast by a hand of destiny, that his world has become illuminated because of her, and so I think he’s kind of just going for the ride. He just feels this kind of magnetism that he can’t shake.

BROWN: Do you think he loves her, or do you think it’s something different than that?

KIRBY: I believe that he loves her.

BROWN: Did you know the director Sarah Polley before you started filming? Because you were both on Slings and Arrows, but I guess not at the same time.

KIRBY: Yeah. We worked at different times on Slings, but I knew Sarah. I did a film with Sarah before that called Luck, where I played a sort of mopey, reluctant gambling addict to her intellectual muse. So we’ve known each other for a while, and had the opportunity now and again to say hello and catch up—Take This Waltz is a way of catching up.

BROWN: And when she called you, did you say yes right away?

KIRBY: Yeah, I mean, it wasn’t that simple. I read the script and then she and I met for breakfast and had a really nice time catching up. I auditioned, and she made it incredibly comfortable for me, it was a very fun experience, which, auditioning is not generally the most fun that one can have in a day. Of course, when she asked me to come onboard I was thrilled, and kind of taken aback, just because of how much I respect her as a director and also the cast that she had put together was so impressive. I felt so honored to be asked to be a part of it.

BROWN: Was it particularly nerve-wracking to be auditioning for your friend?

KIRBY: No, for some reason I didn’t find the experience [of] auditioning nerve-wracking, it was just playful, I guess because we did it at her house. A lot of the time those situations are sort of [in] intimidating foreign places. This just made it more of like a sense of a work-in-progress, so there was no thought about the end result, more like a couple hours of just trying stuff out. Really just play.

BROWN: And it’s been going around to a lot of film festivals. Are you really sick of talking about it?

KIRBY: I’m not. I think it’s partly because I’m still sort of intrigued by the film, and I’m so proud of it also, and so impressed with everyone’s work. It’s just one of those things that I’m so happy for, that I kind of like talking about it. People seem to engage after seeing it in really interesting conversations, so I’m happy about that as well. I’m not tired yet. Yet. [laughs]

BROWN: Do you think that there was a right choice for Margot to make?

KIRBY: No, I don’t know. I don’t think the film really functions in a way that there’s anything that’s delineated as right or wrong, or any kind of black or white options. It feels a lot looser and more colorful than that. On one level, I really see the point about her—making the mistake that we all make when there’s a gap in excitement of life, and we just seek something new out. I can see that as being a fault, but I also really admire the audacity that it takes to feel like that is you’re right to have. We’re not here for a long time, and to burn as brightly as you choose to within the rights of your spirit. I don’t have a right or wrong answer.

BROWN: I wasn’t really expecting you to have one. With The Samaritan, when you first read the script, were you like, “Oh, this poor guy, his dad got killed…” or were you like, “Yes, I get to play someone evil!” ?

KIRBY: [laughs] The idea of playing someone who’s a bit of a baddie was definitely compelling, but what I was most struck by was, I was so sort of disturbed by Ethan, Ethan’s actions, that I was intrigued to find out what his motives were on a deeper level than just “I lost my dad.” I think [that’s] a huge part of it, but to look into that and dig a bit deeper was something that really intrigued me. I found his actions a bit nauseating.

BROWN: How did you go about delving deeper into his motivations?

KIRBY: One thing I always find helpful is to imagine the person as a child, imagine them at a very early stage, prior to having all of the things taken away from them, or all of the habits put onto them that they end up having, and then going from there. Definitely with Ethan I feel like there’s a great deal of loss, and little missing moments in sort of your standard behavioral nourishment, little things that just missed.

BROWN: That line of thinking can sort of put you off having children…

KIRBY: [laughs] To some degree.

BROWN: Between films, do you do theater? What have you been up to?

KIRBY: Yeah, I do get to do some theater occasionally. I don’t get to do it as much as I would like to. You try to fill your life with hobbies; [acting] is really so satisfying when you’re doing it, and definitely feeds your imagination and creativity to a great degree, but you can’t really take much away from it to show for it. I try to fill my time with other things.

BROWN: Can you give me some examples?

KIRBY: I have been taking some classes in woodworking. It’s really helpful just looking at a problem, and having a very tangible way in constructing it. So much of the work that I’m used to begins in such a muddy realm and you try to shed light on it, make something grow out of it, but you don’t really have anything to show for it except for the actually doing of it. But with woodworking, it’s really sort of gratifying to be able to have an actual piece to touch, and then step back and be able to share it.

KIRBY: The first thing I built was a cabinet.

KIRBY: It was quite ambitious. I’m very happy with it. A cabinet with a drawer—a small table cabinet—so it has a little drawer, and the door has a floating frame held together with pegs. I’m very proud of it all, it’s definitely satiated another aspect of my life in a very good way.

BROWN: Did you paint it?

KIRBY: No, I’ve left it untreated because I’m afraid to apply anything in my apartment. I’m waiting until I have a day where I can go outside and treat it. I think I’ll put a linseed oil on it, maybe.

BROWN: Have you named it?

KIRBY: [laughs] No. Do you think I should?

BROWN: Yes. What are you making next?

KIRBY: I don’t know. I have dreams but I’m holding on close to them right now. If you have any suggestions, feel free.

KIRBY: A spice rack? [laughs] A spice rack is good. Or an ashtray. That would be a step down probably.

BROWN:  Coasters! You should try to work it into your next film role.

KIRBY: Yeah, that would be good, right?

BROWN: Do they ever ask you that. “Do you have any special skills? Can you juggle, etc.?”

KIRBY: Yeah, I think on my resume it still says that—that I can juggle.

BROWN: You can actually juggle?

KIRBY: Sure, I’m a drama nerd.

KIRBY: Was he actually exciting? [laughs] Well, he’s so iconic in my memory.  As a burgeoning fan of film, he seemed to be there so much of the time when I was really getting hungry for cinema. He’s in Jungle Fever and Do The Right Thing, he shows up in Goodfellas, Jurassic Park, and Pulp Fiction; movies that at the time—culturally and for me personally—really carry a great deal of merit and weight. Because of that I was definitely intimidated to meet him and to work with him. But it became evident quite quickly that he’s a very nice man, and a very playful person, and is also a very hard worker. It became quite fun once we were into the action.

BROWN: What was the first film that you can remember frightening you?

KIRBY:  Well, Empire Strikes Back I went to see when I was two, and Darth Vader—I, for some reason, have a vision of coming out of the screen.

KIRBY:  Scarred for life. You try to get over it, but yeah, probably. It’s my favorite Star Wars movie now.

BROWN: Have your parents seen The Samaritan?

KIRBY: They haven’t seen The Samaritan, no. They’ve seen Take This Waltz.

BROWN: Are you going to let them see The Samaritan?

KIRBY: Yes. I don’t think I have a choice in the matter. They seem to latch onto whatever I do. I don’t have control. I try, but no matter how hard I try…

BROWN: What are you up to next?

BROWN: Cut down some trees and build things?

KIRBY: I’m not really at the felling of trees yet, although one of the schools that I go to does teach that.

BROWN: Those were pretty much the questions I had to ask you. Is there anything else you would like to talk about?

BROWN: Well, you should be. I loved Take This Waltz.

KIRBY: I’m glad. How did you find Michelle?

BROWN: I felt like she was a different Michelle than I’ve seen in other movies.

BROWN: And I didn’t know if I was remembering wrong, if she was really like this all the time. . .

KIRBY: Her work is really impressive, I’m so proud of her.

BROWN: Are you Brooklyn buddies?

BROWN: You could take her to a woodworking class.