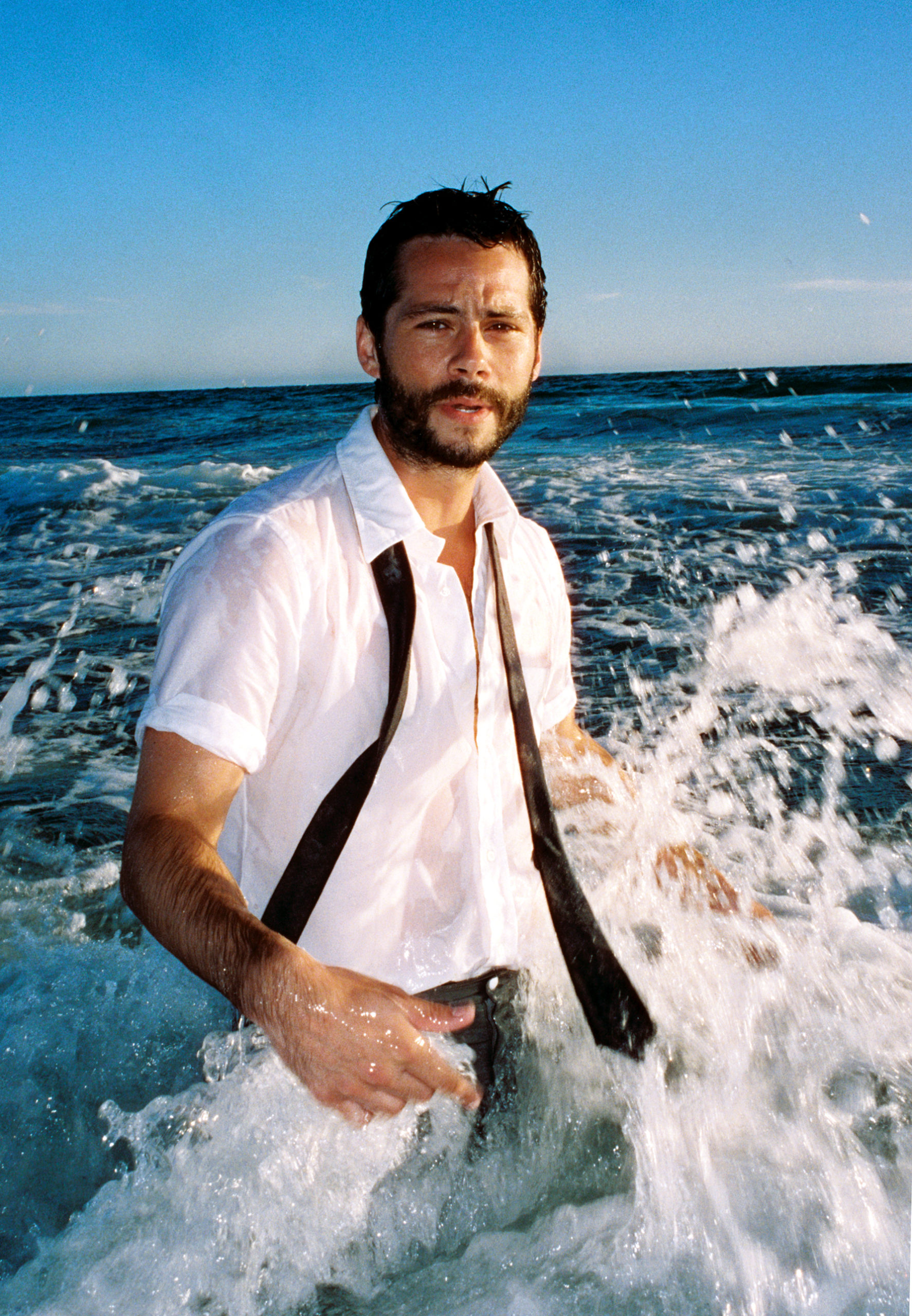 All Clothing and accessories by Thom Browne

Last year, Dylan O’Brien proved he doesn’t take himself too seriously when he appeared on Curb Your Enthusiasm as a highly exaggerated version of himself. It’s a rite of passage for any actor with enough self-awareness to take the piss out of the whole fame thing, and a chance for O’Brien, largely known for his roles in MTV’s Teen Wolf series and The Maze Runner franchise, to show off his comedic chops. Now, the 30-year-old actor is proving that was no fluke by setting his sights on another fame-obsessed corner of society: influencer culture. In Not Okay (out July 29 on Hulu), director Quinn Shephard’s biting satire on the perils of clout chasing, O’Brien plays Colin, a status-obsessed influencer who works with Danni  (Zoey Deutch), an aspiring writer who finds herself in the internet’s crossfire after pretending to be the survivor of a traumatic event for likes. We recently caught up with him to discuss his perspective on influencers, why Gen-Z is misunderstood, and his selective process for choosing new roles.

JACKSON WALD: How were you introduced to your character in Not Okay, and what did you think about him upon reading the script?

DYLAN O’BRIEN: The script first came in as just, “Check this out, and if you like it, do you want to meet Quinn?” I knew that Zoey was attached. I had just worked with her earlier in the year and loved her, and I’d heard that Quinn was a very talented, young, up-and-coming filmmaker. I checked out Quinn’s movie. I did all my homework, and I read the script. I’ve just always been taken aback by these, not even influencers, but these white tatted kids who talk with blaccents as if they’re from the streets, appropriating Black culture, and being someone that “we” are thirsting over. I found it such an odd trend, but I was fascinated by it. That’s how I saw the character. I wanted to go full force with it. I wanted the tats, the Bieber blonde hair, and an MGK Fortnite skin. I just wanted to take the piss out of that kind of person.

WALD: It’s interesting to track the origins of that type of character. The first thing that came to my mind is Vanilla Ice. But If you really want to pinpoint it to a certain moment—I’m interested to hear where you think it started—but to me, it’s Vine. Because Vine was TikTok before TikTok.

O’BRIEN: I think you’re totally right. Vine is the first time I became aware of the influencers who are becoming like the Cameron Dallases, or Nash Grierses, and in reality, are pretty white kids from these suburban towns that talk like they’re from the block, and they just make these thirsty vids.

WALD: When you were preparing for the role of Colin, was there any prep involved? Did you spend hours watching TikTok, or something to that effect?

O’BRIEN: No. What’s funny is, I should have done more of that. I was actually dating a girl that summer for a bit and I was picking up a lot of things from her, too. She had that sort of vibe. Like she’d be constantly saying, “OD as fuck,” and “No cap, and cap, no cap.” Just all these terms. I would just be walking around my house, and would just record riffs on my phone. I really wanted to explore the dichotomy of him always having these beliefs, and then his actions being completely fake as fuck.

WALD: Is there an audio recording of you just going, “Deadass”?

O’BRIEN: What’s funny is, when the part was officially offered to me, I sent Quinn a tape on my own of how I wanted to do it, just in case it wasn’t what she wanted. I sent her this random tape of me talking like him, and saying this random shit.  She sent it back, and she’s like, “That’s totally it.” WALD: The movie is a referendum on influencer culture and how it’s become part of the zeitgeist. What are some of the hard questions and conversations that we should be having post-viewing it?

O’BRIEN: Whether or not anyone tries to deny it, we are all just so online. I’m a millennial, so I didn’t grow up with social media. The fact that the access to information and the ability to constantly be joining in a huge conversation of things going on in the world is a really huge difference. Kids now are so much more engaged from such a young age, in a way that was harder to come by when we were kids. In a weird way, it’s become cool to care about that shit in a way that never was, which is a really great thing. I think something else that the film talks about is how far someone is willing to go, and how much are they willing to lose sight of themselves, in sacrifice of this longing to exist online, or have a viral moment, or be relevant. When I spoke to Quinn about the movie, she was like, “I don’t want this to be a negative take on social media. I think that’s really shallow.” [The film is] not saying that the internet is bad, or social media culture is bad. There are a lot of incredible things that come out of social media. I used to be someone who never knew how to engage with it. I always had it peripherally for work, but it wasn’t natural for me to just share my life online. With everything that’s gone on the past few years in our world, and particularly our country, it just became natural to see the value in it, and the power that it holds. I remember Ahmaud Arbery. That was a huge moment for me. I was like, “These guys would literally just be on their fucking couches after murdering this kid if this video didn’t circulate online.”

WALD: We’re in an era where a lot of movies that are being pumped out feel very formulaic. You already know the structure going in. This film feels like a total rebuke of that.

O’BRIEN: You nailed it. Even just as a viewer, and as a fan of watching stuff, it feels so diluted and oversaturated at this point. I can’t even keep up. All I watch is just Reality TV. Occasionally, I’ll watch a movie that I obviously want to go see, but most of the shit that the streamers put out is just regurgitation. This was so cool and fresh to read, and such an easy yes to sign up for.

WALD: Obviously, this film is targeted to a certain demo, and I’m wondering what you think of what an older, non-Gen-Z person who sees this on Hulu and clicks on it might think upon watching it?

O’BRIEN: It’s funny. I think they would probably have less advanced thoughts about it and have a shallower take. I remember millennials and boomers, when Gen-Z was growing up with phones in their hands from such a young age, being like, “Oh my god, these kids are going to be ruined. No one’s going to know how to socially interact. They’re just going to be all on their phones, and they’re going to be so weird and socially awkward.” I think it’s so hilarious how wrong that take was, and how resistant some millennials and boomers are to that fact. I fucking love Gen-Z. I’m blown away whenever I’m talking to a kid, who’s seven, eight years younger than me. I feel like there’s always such confidence in who they are, in their identity at such a young age. They have such an awareness of the world, such openness to learn, and to talk. WALD: You’ve been working on a film called Caddo. How’s that been going?

O’BRIEN: I’m really excited about Caddo. Those filmmakers, Celine [Held] and Logan [George], I saw their shorts during the pandemic. There was just something mind-blowingly cinematic about them. I thought they were really talented, then we met, and then they sent me this script nine months later. We went and shot it in Louisiana in the fall. They’re just so fucking talented. I think they crafted something really cool. It’s a really hard swing to pull off.

WALD: One of their movies has been on my list for a little bit.

O’BRIEN: That was their first full feature. Go check out their shorts. They’re so eclectic. Each one is really powerful and has a completely different feel to it. Other than that, I worked all last year pretty much, and that was a really good way to come out of being locked down for a year and a half. Getting back to work felt really good. I’m now in the middle of taking a life year. It doesn’t benefit me to go work on something that I’m not really in love with, and fulfilled by, and want to see get made. It’s hard to operate in this landscape right now, without doing a Marvel movie, a Netflix show, or a Hulu series.

WALD: You want to maintain your creative integrity.

O’BRIEN: Yeah. I want to stay patient, and I also value life, too. I don’t need to be doing a movie every fucking month. If I don’t have my people, and the people that I know and love, and have conversations outside of a set every day, then I’m not really learning or growing as a person. I’ll be stagnant as an actor as well. If I have a year of work, I’m definitely going to take a year of life right after that. I think that’s just incredibly essential.