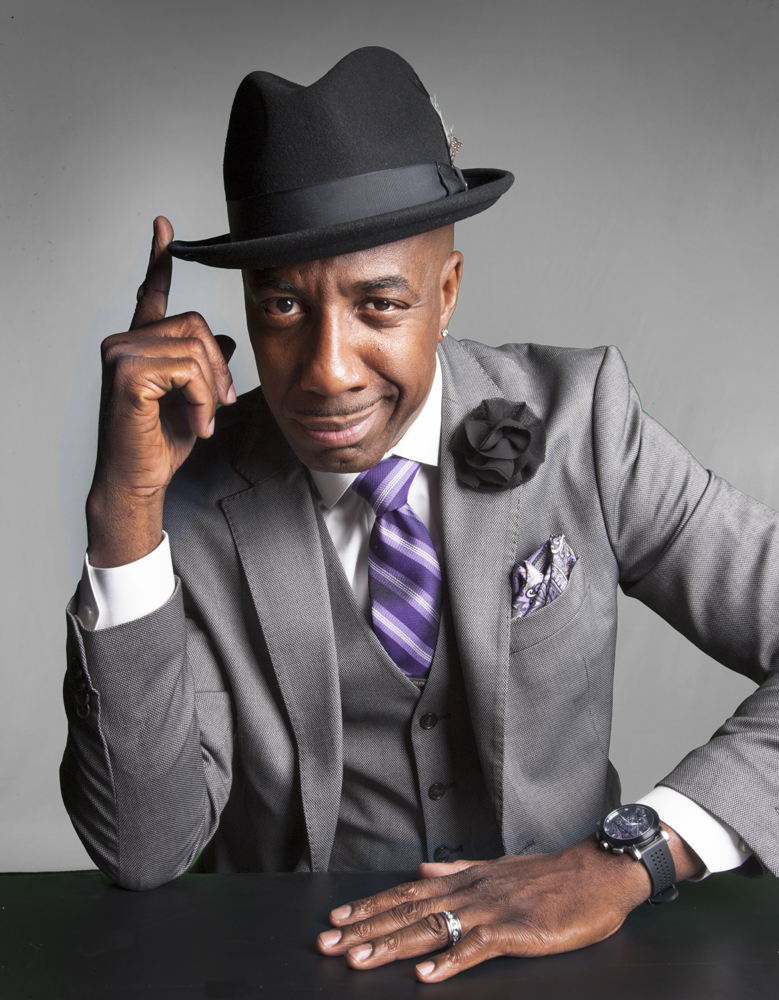 Leon Black is a modern-day prophet of the profane: a philosopher of fucking, the patron saint of sex, and the self-proclaimed President of Hitting That Ass. The character has long been a fan favorite on Curb Your Enthusiasm, having made his debut during the sixth season as the black Don Juan to Larry David’s neurotic Jew—a quick-witted source of support, off-the-wall advice, and inane wisdom. Leon is Larry’s perfect foil, often indulging in his friend’s mishegas with his own unique brand of ruckus, but also grounding him with a surprisingly clever perspective.

But Leon would hardly be as memorable of a character if he were not played inimitably by J.B. Smoove. Born in Plymouth, North Carolina and raised in Vernon, New York, Smoove is also an accomplished stand-up, and cut his teeth on MTV’s short-lived Lyricist Lounge Show before landing guest spots on Chris Rock’s namesake HBO talk show and starring opposite Rock in Pootie Tang. After a brief stint writing for Saturday Night Live, Smoove landed his breakout role on Curb, and quickly cemented his spot on the show by turning what very well could have been a bit part into a fully fleshed-out character that at times seemed to anchor the entire series just as much as Larry David himself.

With the highly anticipated ninth season of Curb wrapping up this weekend, Smoove has once again blessed us with more Leon, and not just on TV. The character now has his own bible, The Book of Leon, divinely revealed to Smoove by the so-called POHTA himself. “I had to put my do-rag on and actually turn it up,” Smoove explains. “There’s a lot of Leon in JB, but there’s no JB in Leon.” Luckily for us, however, Smoove agreed to play the part of medium and call on the spirit of Leon again, to offer some advice to some of our readers. Just be sure to exercise caution should you choose to heed his words. Smoove is the first to admit that, “This dude’s fucking crazy.”

Dear Leon, my desk mate at work is very chatty. Normally, this isn’t a problem, but come lunchtime, it’s another story. He’s a spit-talker. Shit goes flying everywhere. What do I do?

LEON BLACK: Oh, he gotta know. Here’s what you do. You talk about somebody else who’s a spit-talker. And you talk the fuck outta them. You give ’em a perfect example of what happens when someone is spittin’ in your goddamn face. You tell him how it’s a pet-peeve of yours, when motherfuckers get too close to you, and people got watery mouths, and their mouth is too fuckin’ moist. And you use this term: moist mouth motherfucker. See? That anchors it in that his mouth is humid. Like all the affirmations of that being a moist, fucking juicy mouth—you use “juicy,” “this juicy-mouthed bastard.” You gotta paint the perfect picture so this dude fuckin’ knows it bugs you when a juicy-mouthed person, a moist-ass mouth, a humid-mouth person, a juicy-ass mouth—a goddamn watery fuckin’ mouth—all the things that explain vividly what the fuck bugs you about that shit, right?

Dear Leon, I’m very excited to finally move in with my girlfriend. We found a great little place, perfectly located, and right in our price range. The only thing is that there’s one bathroom. I suffer from IBS, so let’s just say that when I need to go, it isn’t pretty. I’ve managed to keep this from her for years. What do I do?

BLACK: Make a schedule. A shit schedule. You always make a shit schedule. See, some people shit in the morning before they go to work, some people do a heavy shit before they go to bed. Here’s what you got to do. You know the term “shit, shave, and shower?” You change the order of that motherfucker. This is gonna fuck you up. You’re going to feel weird doing this shit, but one of you gotta switch it up. One of you got to shower, shave, shit, and one of you has to shit, shower, shave. So, you got to change the order of things. You have to offset that shit. That’s the only way that’s going to work. You’ve got to change your order, but you both can’t be on the shit-shower-shave schedule. You just can’t. You can’t do it, it’s not going to line up right. Now, one of you is going to have to go to work, or go out with a shitty ass crack, you know what I mean? You’re going to have to alternate the weeks, switch it back and forth so you’re not on the same shit schedule. Once you’re on the same shit schedule, that’s what fucks it all up.

Dear Leon, my father has for some reason decided that the coolest thing to do in his middle-age is wearing obscene fake gold chains bought off ebay. It’s extremely embarrassing. What do I do?

BLACK: Oh, shit man, that’s a rough one, man. First of all, those cheap ones from eBay will turn his neck green. It’s going to turn it green at some point, and he can’t wear ’em in the shower, of course. Can’t do any of that shit. I just say let him do his dizzle, man. Let him do his motherfucking thing! Let him get some silk-ass shirts, unbutton it down to the navel, and let him do his thing, man, you know? Let him do his thing, let him do his dizzle-wizzle, man. If I was you, I would add to it. I would get his initials in big-ass letters, and give that shit to him as a gift. You know what I would do? I would keep giving him fuckin’ gold. I would make that motherfucker overdose on gold. I would give him a whole Mr.T starter kit. Like all that shit. I would just keep buying him gold-ass chains. Just keep buildin’ him up, buildin’ him up, until someone says “What the fuck are you doing?” See? Once someone says “What the fuck are you doing?” It makes people realize that they’re doing too goddamn much. He’s doing too fuckin’ much. That’s doing too fuckin’ much syndrome.

Dear Leon, I lost my backpack at work. Normally, I’d go to the lost and found, but let’s just say I had some… personal items inside. Should I just let it go and cut my losses?

BLACK: No, let that shit the fuck go! Let me tell you something: One thing about people that fucks people’s lives up is when they hold on to shit. Some shit, you just got to chalk it up, man. Take that L. That’s called taking the fuckin’ L. Take that goddamn L, man. Take that motherfuckin’ L, bro. Do you know how many fuckin’ vibrators are at the fuckin’ airport? At the security checkpoint? Thousands of the motherfuckers, man. You know? You don’t go pick that shit up! Ladies don’t go pick that shit up! You leave that shit there. Some people leave their fuckin’ sex toys in hotels sometimes. You get the fuck home, call back the hotel, and say, “Hey, I left a vibrator in the motherfuckin’ top drawer, next to the Bible.” Some people open that top drawer because they put a Bible in there. All hotels have a Bible in that little top drawer, that nightstand top drawer. Some people travel with their motherfuckin’ sex toys! You don’t claim that shit, man. Let that shit go, bruh. Let it go! I’m tellin’ you.

Dear Leon, I’ve somehow managed to get a date with someone way, way out of my league. When it comes to fucking, though, I’ve got a white belt. If it gets there, how do I stop from getting KO’d?

BLACK: Goddammit, boy. Got a little belt, and you’re way outta your league. Oh, man, fuck, man. You got to turn it up, man! I said this in the book: You get out there, and you got to train. You’ve got to dick train. You got to dick train, man. There’s a chapter in there about getting out there. It would be cool if you had a loaner johnson that you could fuck around with and get your speed up, you know what I mean? You run that dick in the ground, you tap some ass, you run dick errands. Dick errands, like fuck errands! You run these fuck errands, get your speed up, get your timing, get all your moves, your positions and shit, get all that shit up to par, and then you can compete with women who are way out of your league. You’ve just got to work on it. It’s a process. You’ve got to be fuckin’ active in that shit. You got to train! Motherfuckers want to run a marathon, what do they do? They run! They fuckin’ run miles. Treadmills, elliptical machines, all that shit. You got to train! You want to run a 5K or a 26 mile marathon, you got to fuckin’ run. Right? Same thing with fuckin’.

Dear Leon, the lock on the bathroom door at work is broken, and I accidentally walked in on my boss pleasuring himself. He definitely saw me. What do I do?

BLACK: You say,”Hey, man.” You act like this is the greatest shit ever. He will appreciate that shit, because it’s between you two.  You say, “Boss, do that shit! Beat your fuckin’ shit off, baby!” You know what I mean? He’ll be like, “Wow.” Now he feels comfortable. He won’t feel all uptight when he sees you, and he won’t fire your ass, ’cause believe me, that’s grounds for getting your ass fired. Not fired because you ain’t doing your job, but fired from embarrassment. The only way you get past that shit is you go to the next stall. You excuse yourself and say “Oh, shit, I’m sorry. Normally I come in here and pleasure myself during this time of the day. Fuck man, we gotta work out.”  It’s the same thing as the shit schedule: “We gotta work the schedule all out. Let me know what times you go and come in here and beat your meat, and I’ll work out what time I come in here and beat my meat, so we’re not coming in here bumpin’ heads, thinking we’re going to beat our meat.” You’re good with your boss, man. You tell him new techniques and shit. You turn your hand—you turn your palm reverse—you hit it in the back. There’s all kinds of positions you can talk about. All kinds of cool shit you can talk about. Lubricants and that kind of shit. Coconut oils are fabulous right now. That’s the most popular right now: coconut oils. Sunflower seed oil’s pretty goddamned good, too. You know what I mean? Coconut oil is killer. It’s not that oily. Women like it because they can still give you a blowjob and be fine. Olive oils or KYs, you can’t eat shit like that. It’ll get you sick. But coconut oil’s so fuckin’ delicious, it’s like fuckin’ coconut milk! Eat that shit and you have no fuckin’ problem and it’s great for your fuckin’ skin.

THE BOOK OF LEON IS OUT NOW. YOU CAN CATCH J.B. SMOOVE AS PART OF HIS “LOLLYGAGGING” STANDUP TOUR. TICKET AND SHOW INFO IS AVAILABLE HERE.