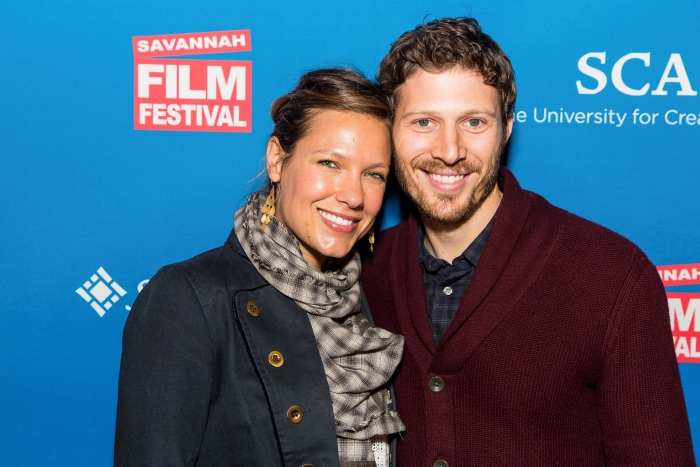 ABOVE: ZACH GILFORD AND KIELE SANCHEZ AT THE SAVANNAH FILM FESTIVAL PRESENTED BY SCAD.

It’s no mean feat to be a  Friday Night Lights fan-favorite. Peter Berg’s television drama, which ran from 2006 to 2011, had a lot of good characters, and a lot of good actors: there was the surly Tim Riggins, played by True Detective Season Two’s newest cast member Taylor Kitsch; the endearing Landry (Breaking Bad scene-stealer Jesse Plemmons); the reluctant quarterback Vince (Michael B. Jordan), and, of course, Connie Britton’s Tammy Taylor.  But, at the heart of the show, was Zach Gilford’s Matt Saracen, who goes from a forgotten second string benchwarmer to a star quarterback to a visual artist. Since the show wrapped three years ago, Gilford, who graduated from Northwestern in Chicago, has been keeping busy with films such as the summer horror flick The Purge: Anarchy. He also got married.

ANDY WARHOL: Where were you born?

GILFORD: Nothing yet. I’m starving.

GILFORD: I got signed by an agent and a manager from a showcase I did in NYC my senior year of college.

GILFORD: My first job was bagging tulip bulbs as gift bags for a realty company.

GILFORD: I’m a big fan of love. It makes every day better.

GILFORD: I dream almost every night.

WARHOL: Have you had any nutty fans scare you?

GILFORD: I am an extremely jumpy person and am often spacing out, so I get really startled when people reach out and touch me. The worst place this ever happened was when someone reached over from the upward bound escalator to the downward one I was on.

WARHOL: Who was the nicest person you worked for? (What did they do that was nice?)

GILFORD: The nicest person I worked for was Scott Von Eschen. He didn’t fire me.

GILFORD: I get nervous when I watch reality TV. I don’t understand why people think they can get away with cheating on their spouse when there are cameras following them around.

GILFORD: I’m frustrated by the lack of equality between men and women.