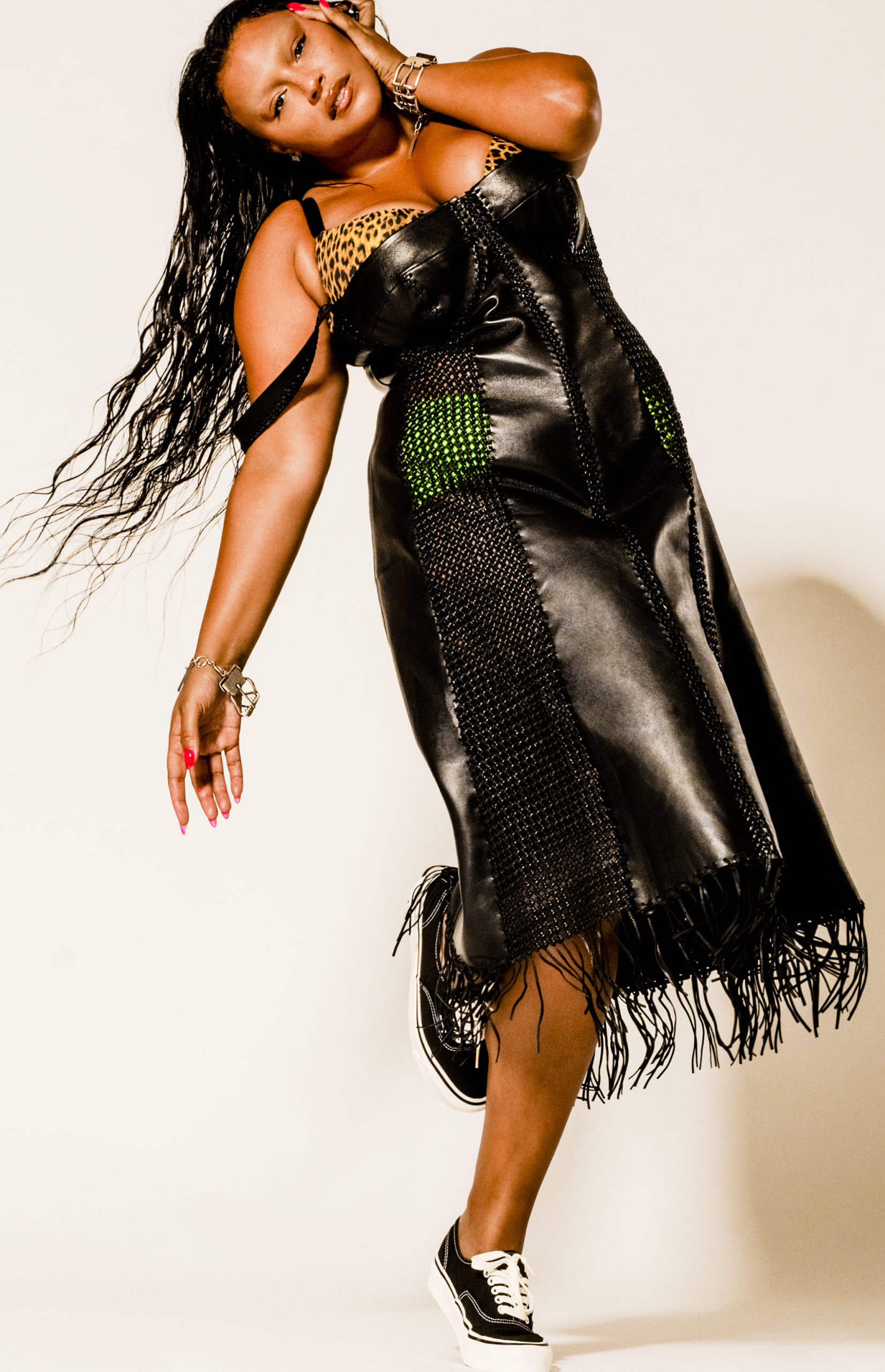 Dress by Chloe. Bra and Underwear Stylist’s Own. Bracelets by Marine Serre. Shoes by Vans.

Luminous-in-real-life (and I’ve known her since she was a kid) model Paloma Elsesser is more than her bonkers bone structure. She’s a staple of the grimy Chinatown sidewalks where New York’s creative energy is made, and is as comfortable on a bench under the Manhattan Bridge as she is posing for a Vogue cover. Likewise, the designer, actor, and style icon Chloë Sevigny is a big sister to all fashionable weirdos below 14th Street, Paloma included. Here, the two magnificent downtown women gossip about cute skaters, the state of the modeling industry, and the Oprah effect. —CAT MARNELL

PALOMA ELSESSER: Hi! How are you?

SEVIGNY: I’m good, how are you?

ELSESSER: I’m well. I’m grateful and happy to have this quick little chat. It’s such a crazy time.

SEVIGNY: Oh good. I am so happy to see you in, like, almost every single campaign in the fashion world. How do you manage? ELSESSER: I have an amazing team. I have amazing publicists—shout out IMG and Huxley. And I have amazing friends and family so I feel very held down. I definitely have breakdowns. I definitely have a hard time. This time of year is hell on earth, but it’s not every day of my life. It’s a crazy month and then February is another crazy month, but not every day is crazy. There are parts of my life that feel really intense and then some that feel really calm. I just try to be in gratitude in both.

SEVIGNY: I find sometimes being more involved and invested keeps it exciting. And then sometimes, the ones where you’re just told to stand and look pretty are relaxing. [Laughs]

SEVIGNY: How much photo approval do you get throughout all of your things?

ELSESSER: I’d say about 20 percent of the time. [Laughs] ELSESSER: Twenty to 30 percent, but that’s more than most, because most get zero. So I’m grateful.

SEVIGNY: Yeah. And they’re capitalizing on us—and you and I are more than just a pretty face, thank you very much.

SEVIGNY: We represent something bigger, hopefully, and empowering—girls look to us.

ELSESSER: Exactly. Especially with how you’ve lived your career, it’s a bit more honest. I’m curious to know how you feel about that, like how it feels when you work with Haley [Wollens, Sevigny’s good friend and stylist] and you’re like, “I actually feel excited about this picture.” When I work with my people, it just makes a difference. We do it for the freaks.

ELSESSER: We do it for the girls that weren’t popular and weren’t the ones, but then became the ones. [Laughs] Bag (Worn as Top) by Marc Jacobs. Jeans by Balenciaga. Vintage Bracelet by Prada. Underwear and Earrings Stylist’s Own. Shoes by Vans.

ELSESSER: I’m like, I don’t really do it for it to be polished, for it to be perfect all the time. I remember when I first signed with IMG they were like, “Who are people that you admire?” I was like, “I don’t know, I love a career that floats between Chloë and Oprah.” [Laughs]

ELSESSER: And I’m still fighting for that.

ELSESSER: But I’m lucky enough that my perspective is respected, it’s valued, whether it’s my point of view, my style, or whatever the fuck I have to say.

SEVIGNY: I feel you are making more relationships, especially with bigger brands. I remember when we were in Bulgaria shooting for H&M—

SEVIGNY: You were talking about all these different initiatives you’re involved with and how having those people’s ears is also really important.

ELSESSER: It’s just about being centered in something bigger than just making cool pictures and being fabulous. ELSESSER: Yeah. The essence of why I first had this career idea was just that you and Oprah alike have authority over your own story and who you are and it’s not this weird veneer. You see what you get. There’s also mystery, but it’s not some manufactured version of yourself. I’m really trying to dance around saying authenticity, but that’s actually what it is.

SEVIGNY: Right. I know that word is overused.

ELSESSER: But it’s true. I’m not doing this to be the coolest, the hardest—whatever. I’m not out here to make people feel like shit. Even working with a brand like Vans feels very affirming.

SEVIGNY: Well, let’s be honest. You have a really deep-seated place in the skateboarding world.

SEVIGNY: I mean, some of the questions they sent me to ask you were like, “Who’s the cutest skater?”

SEVIGNY: [Laughs] I’m like, “I’m not for sure she’s hot on the skater boy thing right now.”

ELSESSER: But I do think that—

SEVIGNY: Well, I’ll tell you who my favorite skater is. SEVIGNY: I bought a pair of the jeans that she made.

ELSESSER: Oh, my god. She’ll die. It was actually so cute. So for the people that don’t know, Efron is the cutest little skater that skates for Supreme and for Bill [Strobeck]’s brand Violet.

ELSESSER: She left this weird, super cis-male, Supreme thing, and went to the Marni fitting and then I went right after. It’s so beautiful, seeing her walking in Marni, it’s sick. Those are the kinds of voices and people that I’ve always been curious about and like to surround myself with, and make pictures with and work with and have dinner with and talk shit with. And you’re one of them. [Laughs]

SEVIGNY: The Interview party the other night was so fun.

ELSESSER: I’m so happy you came. Honestly, it was like, “This doesn’t feel like work.” This time of year you have to pick and choose where your energy should be. It was just a very cute night. I know before you left I was like, “We need to have our moment.” This is a partial moment, but we’ll have a real dinner moment. What are you doing today?

SEVIGNY: I’m doing a Zoom preproduction meeting for a film that I’m shooting next week. Remember the drag performer Lypsinka?

SEVIGNY: He was very popular in the ’90s and I’m shooting this performance short film, I guess it’s around 40 minutes, next week. So we’re just in full-on preproduction. There’s a lot of wigs, a lot of makeup, and we’re trying to figure out how to satisfy everyone’s needs and desires, which is very tricky with our timing and low-budget situation. I’ve always thought Lypsinka’s such an icon, so I’m very excited to turn him out.

ELSESSER: That is going to be incredible. Sweater by JW Anderson. Underwear and Earrings Stylist’s Own. Shoes by Vans.

SEVIGNY: And then I’m going to do a Bottega dinner at the Strand. I want to support, and I think there’s interesting things happening over there.

SEVIGNY: And they also made my husband his wedding tuxedos so I felt it’s a give and take so we have to show up. [Laughs]

ELSESSER: Yeah. You’re like, “I’ll pull up. I’ll show face. Thanks for the tuxedo.” Also, it’s not that bad being surrounded by books. I’ve never gone to a dinner at the Strand. I was supposed to go to that, but I’m going to Astoria Seafood for my boyfriend’s birthday.

SEVIGNY: Oh fun! And are you going to the O.C. [Opening Ceremony] party?

ELSESSER: I’m going to the O.C. party, so I’ll see you outside for several cigarettes.