Jerry Lorenzo Doesn’t Want You to Be Afraid of God Fear of God’s rapture-evoking name may mirror the rise of religious fervor in a time of existential upheaval, but it isn’t a conservative moniker. Founded by Jerry Lorenzo in 2013, the clothing line quickly revolutionized streetwear, its muted colorways and quality textiles imbuing a luxury appeal in everything from hoodies to oversized tailoring. Today, the brand can be spotted on celebrities like Justin Bieber and Jay-Z, and its ethos—a desire to deliver soft-spoken luxury to the modern consumer—is filling the gap in a market chock full of high volume Insta-trends. But the revolution doesn’t stop there. Recently, Fear of God released a women’s line, and today the brand is dropping the Eternal Collection, a line of gender-neutral garments that evoke a ’90s normcore fantasy fit for the likes of JFK Junior and Caroline Bessette-Kennedy—if only they were around to wear them. To find out more about the latest drop, we spoke to the founder and creative director of the seasonless brand about faith, films, and quiet chicness.

TAYLORE SCARABELLI: I’m excited to talk about the new line. My first question is why you chose to name it the Eternal Collection rather than collection eight?

JERRY LORENZO: I think for a few different reasons. Did you get a chance to thumb through some of it?

LORENZO: Okay cool. You know, just as I’m anti-seasons, maybe I’m a little anti-expectation as well. I think my followers were expecting a season eight from me but I’m more driven by the story than honoring [a timeline]. I wouldn’t want to call it the eighth if the real message is perpetuity and chasing something eternal. We designed the collection so that the pieces could transcend time. We stripped it back and only offered what we felt was truly necessary. Putting an eight next to it feels like it devalues it, and I think calling it eternal is just more honest to what we’re proposing at this moment. 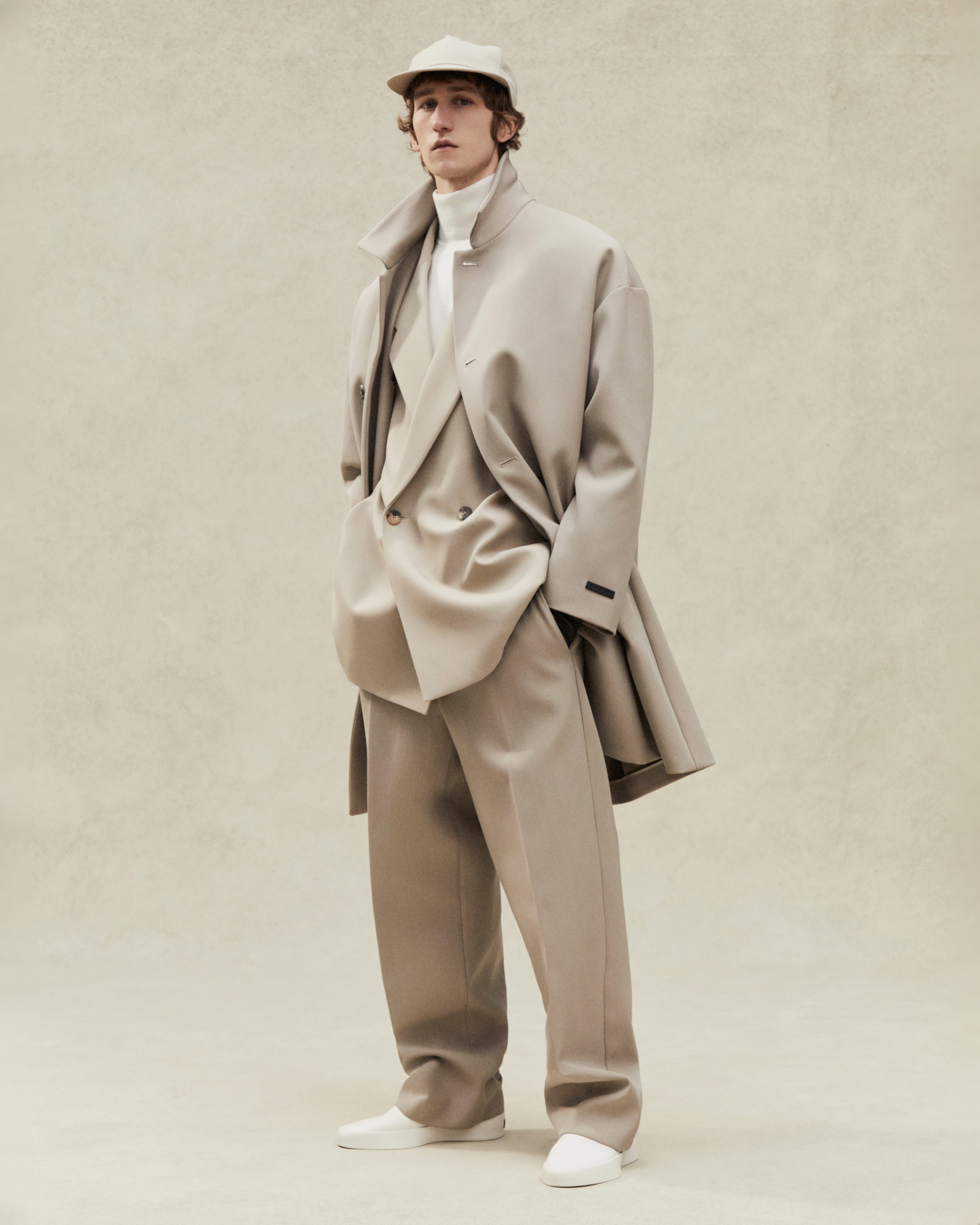 SCARABELLI: Do you feel like it’s a departure from your previous collections?

LORENZO: I like to think that all my collections are different because narcissistically, I feel like I get better with each collection. I’m self taught, the longer i’m doing this, the more clear I am on what I want to say. Now, we have access to better resources and we produce 80 to 90% of the collection in Italy. Our fabrications are better and the construction is better. So yes, it’s different, but the spirit is the same. It’s still an effortless, sophisticated point of view.

SCARABELLI: I was listening to an old interview where you said you watched a lot of movies to get inspired. When I was looking at this collection I was like, “Oh, it’s the modern American Gigolo.” It has that California laid-back luxury feeling.

LORENZO: [Laughs] Yeah, I love American Gigolo, I’m always pulling from the late ’80s and early ’90s a little bit. Richard Gere’s character, his look was a bit more tailored, but he was definitely in monochrome. But I wanted to create something that speaks to where I’m at from a design perspective, from a human perspective—how I want to present myself. I’m getting better and better with tailoring and creating jackets that fit generously on a man or a woman but don’t look baggy on either one. It’s a bit oversized but you don’t look messy. Everything feels intentional and honest—that’s what I was chasing. SCARABELLI: Yeah, it’s tricky. I think right now there’s a problem where no one’s clothing seems to fit properly. Maybe it’s because everyone is shopping online or because everything is sized differently, but I do think there is a renewed interest in tailoring. Do you have any thoughts on that?

LORENZO: I think people are interested in tailoring just because we’ve been in hoodies and sweats for the past two years. I don’t want to hop into tailoring and then hop into a different proportion and feel like I’m a different individual. So we’re designing tailoring in a way that feels like sweats. Moving into public, you’ve got the same feeling of being effortless, but you have the luxury of tailoring fabrics and knits—pieces that elevate your presence. You don’t want to look like you dressed up for anyone, but you still want to feel just as elegant as those who put too much effort into what they’re doing.

SCARABELLI: Yeah. That’s the ultimate luxury, to have a uniform that’s simple but looks rich—and this collection looks very elevated, especially with the color palette: the beiges and the monochrome styling. Who is your ultimate consumer?

LORENZO: I’m always putting myself in the middle. Obviously we have our fit models, but after we do our edits I put the pieces on to see how they feel. I’m betting on myself, if I’m looking for these pieces then there have to be other people who are looking for these same solutions. I can see my dad wearing a lot of these pieces, I can see some younger kids wearing a lot of these pieces. I think it transcends time, I think it transcends gender, and I think it transcends age—and that just comes from being religiously meticulous—obsessing over millimeters, and fabrics, and fits, and colors—and making sure that this thing fits like Tetris no matter who puts it on. SCARABELLI: The Essentials line has almost become ubiquitous amongst a lot of younger consumers and especially young men. Why do you think it’s so attractive to them?

LORENZO: I’m hoping it’s attractive to young men right now. But the bet is really just on the fact that what I’m looking for doesn’t exist. I feel that people are getting into a wardrobe that allows their personality to enter the room before their clothes. Right now, everything is so loud and trendy that it takes precedence before the individual. This was an attempt to let the consumer take these pieces and make them their own.

SCARABELLI: I think that we see a lot of that because of the impact of social media on fashion. How do you think your clothing resonates with that audience, or that platform? Do you try to shy away from it?

LORENZO: Everything for me is super personal. The brand is called Fear of God. I grew up in church. My influences are everything from grunge to hip hop to Ralph Lauren and Giorgio Armani. Being Black, I’ve always wanted to present myself in a way that doesn’t demand attention, but just allows people to see me as a human and give me the respect that everyone else has. I don’t want to be the loudest in the room, but I do want to walk into a room and feel as if my clothing is helping remove the preconceived notions that anyone else may have of me just because of the color of my skin. How do I dress in a way that’s honest to who I am that doesn’t make me feel like I’m trying to be anything that I’m not? How I dress and how I design is informed by how I need to move throughout the world. SCARABELLI: Going back to the name and your religious background, are you interested in sharing the word of God through your clothing? What is the intention behind having something emblazoned with “Fear of God?”

LORENZO: Not at all. The intention is so that the world knows I’m putting every part of me into this, and a big part of me is my spirituality. I’m not one to push that on anyone, but I’m also not shying away from who I am as an individual. Naming it Fear of God just gave me the necessary gas and purpose to design because it’s about a reverence for a higher being. I love the name, because you can look at it in two different ways. It could be a fear of God if you’re not in relationship with God, or it could be a reverence for God if you’re in relationship with him. I think the way that the individual interprets it says more about the individual than it does about the brand. Some people look at it and they’re super inspired by the message, some people look at it and don’t think about it, and some people look at it and question it, and a conversation starts.

LORENZO: I just love that juxtaposition of what fear of God means in terms of the clouds and darkness around the Kingdom of God. I was reading that devotion with my parents when I came up with the name. Growing up in church, anything Christian on a t-shirt was always corny and never landed. The name Fear of God just felt like it had that coolness to it. Obviously God is beyond the question of cool/not cool, but it was cool enough that it gave me something that I could put on our brand. And because I’m not the number one fashion dude, It gives me the gas to continue to push this thing, because I know there’s a bigger message behind it.

SCARABELLI: It’s interesting because there’s a lot of people adopting that language in an ironic way and perhaps even wearing your clothes ironically. For example, there’s a new brand called Praying that sells t-shirts that say “God’s Favorite,” and stuff like that. Maybe there’s a similar sentiment there.

LORENZO: I think there is a similar sentiment, but everyone’s take on spirituality is a little different. Mine’s a bit more humble. I’m not trying to come into a room and be the best dressed, but I also have a level of respect and honor for myself that I am going to carry myself in an elegant way. There’s something about Christianity that is humble and chic, it’s someone who’s the quietest in the room, but their character is the loudest because of the integrity that they walk in. It’s this balance of the two worlds that represent, in my opinion, the best of us.