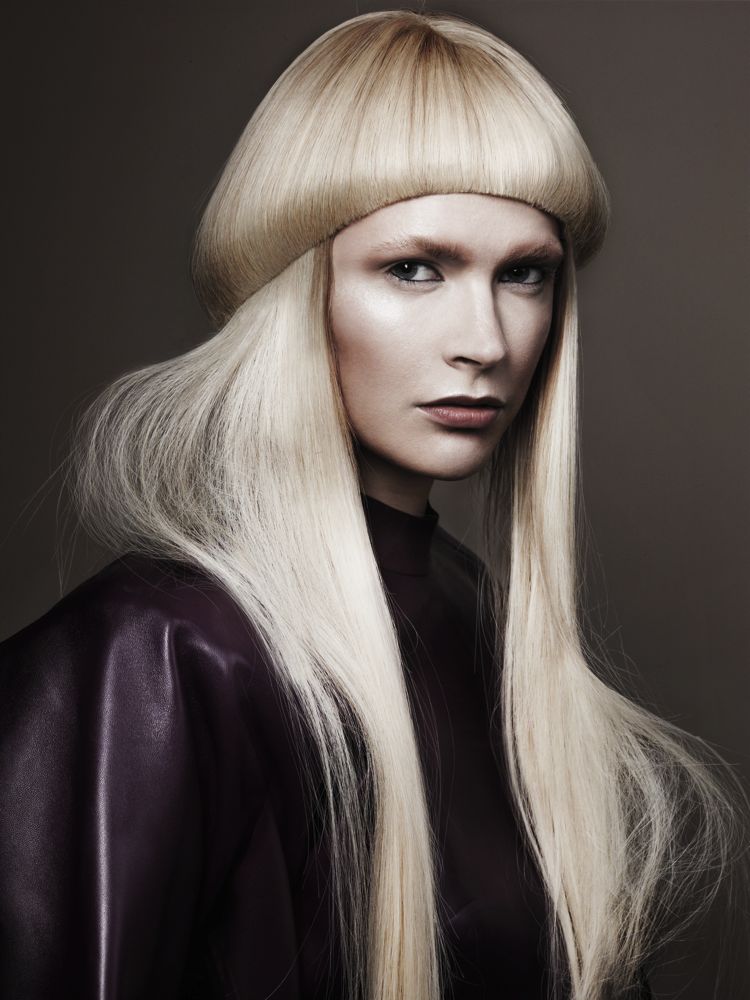 I’m inspired by what people perceive as bad taste. Because good taste is just good taste. There are no surprises.”-Eugene Souleiman

One of the most inventive stylists in the world of hair, London-born Eugene Souleiman has been called upon season after season to create crowing looks for a long roster of designers, including Haider Ackermann, Ann Demeulemeester, Calvin Klein, Missoni, Prada, and Jil Sander. He also did the trim bob that Lady Gaga wears in the video for her song “Alejandro.” Not bad for someone who became a hairdresser mostly by accident. After dropping out of art school in the early ’80s, Souleiman was steered toward vocational beauty courses and began apprenticing with the legendary stylist Trevor Sorbie. His career took off after working on a campaign for Jil Sander in 1995.

It’s not a stretch to call Souleiman’s taut back- combed bobs, shelflike wedges, and wispy, disheveled buns themselves works of art. In 2003, he collaborated with London-based artist brothers Jake and Dinos Chapman on something more permanent: a grandly scaled chess set shown at the Saatchi Gallery. The Chapmans’ bishops, pawns, and rooks are over-size mannequins with anuses for mouths and penises for noses, each one naked except for a pair of trainers and a specific hairstyle by Souleiman. From London, Dinos Chapman connected by phone with 50-year-old Souleiman, who was half a world away in Melbourne.

DINOS CHAPMAN: The last time I saw you, you had pretty short hair.

EUGENE SOULEIMAN: Because I do hair all the time, I don’t want to do my hair. I don’t really want to primp myself. It just simplifies my life.

CHAPMAN: It’s funny that you should be like that.

SOULEIMAN: Actually, I never used to be like that. My hair has been all manner of colors. It’s been crimped. I’ve had leopard-print hair. I probably got sick of doing it.

SOULEIMAN: More often than not, the work is in New York. We were thinking of coming back to England. But actually I can’t get any work in London.

SOULEIMAN: England is an incredible breeding ground for talent, yet it finds it really hard to sustain it or keep it. Once you obtain any kind of success or you step off the island, your ambitions become bigger.

CHAPMAN: I have this fear that I’m attached to London, but in a way that’s not necessarily good. I’m very jealous of people who have the ability to go and live somewhere else and function.

SOULEIMAN: I’m sure you’re always working in your head, but when you’re actually physically working, you’re in your studio, right? For me, it changes all the time. That’s something I really love.

CHAPMAN: See, that’s the thing that I’m jealous of. Because I keep wanting to test those boundaries and think, Okay, could I be an artist in New York? But I feel that my ability to make things is grounded in being here. You almost can’t have too many stimulations, otherwise you just get confused. When people say, “You keep doing the same thing,” it’s like, “Well, yeah, that’s what I do.”

SOULEIMAN: When things start becoming second nature, I get a little paranoid because I feel like maybe my craft isn’t evolving. I get a lot of gratification when I do something that’s really quick. Like if you’ve got someone who’s really twitchy, like Lady Gaga. I have never in my life seen someone move that much in a chair. I said, “Look, your hair’s knackered, you wear wigs all the time. Let’s cut it off.” It took 10 minutes.

CHAPMAN: When did you start thinking about cutting hair?

SOULEIMAN: I never thought about cutting hair, Dinos. You never wanted to be an artist, did you?

CHAPMAN: I always wanted to be one, but I didn’t know what it was. It was the path of least resistance.

SOULEIMAN: It’s the same for me. I was unemployed, and I went into a job center and they said, “Fill this questionnaire out.” And they went, “You’d be a great hairdresser.” I said, “Okay.”

CHAPMAN: Really? My god. You move in some very strange circles—not strange, but special, I mean, to nine-to-fivers. But also you’re not just an inhabitant. You’re one of the people that makes it the way it is.

SOULEIMAN: No. I’m not there yet, because I just don’t think I’ve learned enough. Did you go to Goldsmiths [College]?

CHAPMAN: No! I was at Ravensbourne [College of Art]. Not a brilliant place at all. It’s full of people who weren’t brave enough to apply to [Central] Saint Martins—a bit like me, actually.

SOULEIMAN: Hasn’t done you any harm though, has it? Were you a good student?

CHAPMAN: I worked hard, but no one talked to me. I just couldn’t be bothered. And I spent every day outside the headmaster’s office because of my hair. My parents refused to cut it. The headmaster would come out with bows, and he’d try to intimidate me in front of all the other kids because of my hair. That’s why I hated school.

Unless you’re prepared to make a mistake, you’ll never do anything that hasn’t been done before.”-Eugene Souleiman

SOULEIMAN: You and Jake are both very good artists, and I’m not saying that just to compliment you. If I look at what you’ve done—sculpture, woodcarvings, etchings, paintings, drawings, machines—it’s really diverse. There aren’t many artists who can do that.

CHAPMAN: The funny thing is, that says more about other artists than it says about us. The way I see it, every artist should do everything, should try to be experimental.

SOULEIMAN: Unless you’re prepared to make a mistake, you’ll never do anything that hasn’t been done before. You have to be prepared to be embarrassed.

CHAPMAN: You press the Eugene button and you haven’t got a fucking clue about what’s going to come out. I think it’s our job to keep pushing the barriers and saying, “Well, what about this?” Life would be really dull if you couldn’t do that. And I think that’s why it was worthwhile standing outside the headmaster’s office with stupid hair.

SOULEIMAN: I think it’s true to say about most creative people that at some point in your life, you must experience some kind of alienation to give you a point of view. The other thing is that—and this is where you and I are very similar—I’m inspired by what people perceive as bad taste. Because good taste is just good taste. There are no surprises.

CHAPMAN: I like it when things are slightly off. It’s like in fashion. Sometimes the most memorable thing about a catwalk show is the hair. That’s kind of interesting. Is that a failure on the part of the fashion?

SOULEIMAN: No, I don’t think it is. Because, you know, like, Ann Demeulemeester, she has her thing. She doesn’t have an alternative view on what beauty is, but she looks at beauty in a very different way. Her show is really hard to do. It’s got to have some sort of poetry; there has to be an anger to it. It depends who you work with—everyone’s really different. First I go into their atelier and just look.

CHAPMAN: And then do you discuss it with the designer?

SOULEIMAN: I sometimes do. Sometimes I give them what they think they want, and then I give them something else as well, where I feel sure it could go. In the end, they’re employing me to be a pair of hands. Obviously, they want more than that, but if someone has a very specific idea, I’m not gonna fight them over it.

CHAPMAN: There’s something very interesting about being expected to be creative while at the same time having to deal with so many people involved in a fashion show. You’ve got the designer, the makeup artist, the lighting, the music. All of those things have to be considered. Jake and I don’t deal with anybody else. With us there’s kind of a “ta-da” moment when we put the stuff on the wall and no one knows how many tears or tantrums were involved in making it.

SOULEIMAN: One of my favorite things about art, especially at a gallery, is hearing people talk about the art. I find it quite amusing. I went to see one of your shows at the Saatchi Gallery, and it was like, “Oh . . . [moans to mimic a disgusted viewer] This is disgusting,” and “I can’t believe this.” I was sitting there and I had a smile on my face. I felt a bit smug about it.

CHAPMAN: Those people were born offended. When we have a show, we try to sneak in to listen to what people are saying. Sometimes people say the most amazing things, and you want to go up to them and say, “Fucking great, that’s brilliant! I didn’t think of that.” But you should go there to be entertained, not to be irritated. If it irritates you, don’t go. Seriously.

CHAPMAN: It should always be slightly overstretching its ability. Because otherwise, why bother? If you start aiming at the lowest common denominator, then you may as well stop.

SOULEIMAN: You may as well never start. What have you seen recently that just goes slam?

CHAPMAN: You know the big Leonardo show that came here? I’m so embarrassed to admit this, but I was looking at the drawings, and I got really angry that I wasn’t doing them. So I went home and I started making drawings, and the next day I thought, “I can’t believe what I’ve just done. I’m competing with Leonardo.” You can’t compete with him. I just thought, “Oh, my god. This is a really bad sign.” But it’s funny because things like that should make you angry and want to work better.

SOULEIMAN: Me and my wife went to a [Francis] Bacon exhibition a few years ago in New York. Afterward, we were in a cab and she goes, “That was nice,” and I was like, “What?” I was emotionally drained. It entirely sucked the life out of me. Fucking incredible.

CHAPMAN: But how often does that happen? So rarely. It’s annoying that there aren’t many occasions where that happens.

SOULEIMAN: I was talking to someone about that the other day. They were like, “Oh, what do you listen to? You should listen to Dylan.” And I was like, “No.” I know that he’s a good musician and songwriter—in fact, he’s a poet—but it does nothing for me. Now, you give me Tom Waits and I’m like, “Yeah, I get that.”

Dinos Chapman is a London-based artist who collaborates with his brother, Jake.