Most great thrillers start with a bang. But it is a rare and delicious thriller novel that manages to go beyond the metaphorical gun blast and follow that bullet’s speeding trajectory through the zig of police work hunting down their suspects and the zag of the criminal masterminds trying to outrun the law and make another score. Stan Parish’s second novel, Love and Theft, out this week by Doubleday, manages the alchemy of racing narrative momentum with plenty of style, street smarts, and truly fine prose. Starting with a troop of leather-clad thieves on motorcycles conducting an audacious jewelry heist in a crowded Las Vegas casino, the novel pinballs from a ketamine high in Princeton New Jersey to the beaches of Mexico, where an expert thief runs into bad luck trying to get out of the game. Parish, who was born in Houston, lives in Los Angeles, and has been hanging out in Europe this summer, worked as a culture magazine writer and editor for years, an ideal apprenticeship for his eye for beautiful places and the haunting details. Parish takes Interview on a tour of some of the criminal influences for Love and Theft.

“I’ve been drawn to the dark side of glamorous places since I could walk. When I was three, my dad took the family to the Sunset Marquis in Los Angeles, where he was shooting a commercial. Briefly unsupervised by the pool, I wandered over to a man in a leopard-print bathrobe and purple bandana. I grilled him about being a pirate until my dad intervened, apologizing profusely to Steven Van Zant as he dragged me away. I eventually gave up my dream of the pirate life, but age and experience did nothing to dull my interest in the illicit and the occult. I became a kind of diviner, but instead of water, I had a sixth sense for strange subcultures, suspicious characters, and after-after parties. If there was a large BDSM community hidden in the castle-like mansion of a posh suburb, I would somehow be invited for dinner. Nothing exemplifies this fascinating high/low cultural contrast better than the armed robbery of high-end jewelry stores, the kind where salespeople used to ultra-wealthy VIPs are forced to hand over multimillion-dollar pieces to men with guns. A high-end jewel heist opens Love and Theft, my new novel. Much of the book was inspired by true crime—some of which I read about or watched on YouTube, some of which I stumbled on myself.” “In April 2007, two stolen Audi A8s smashed through the glass façade of the Wafi Mall in Dubai. In a marble rotunda, the white car rammed the secure entrance of Graff Jewelers, while the black car spit out men in masks with automatic weapons. The heist was the work of the Pink Panthers, a large and wildly successful gang of jewel thieves. At around 1:26 in the Wafi mall security video, a small faceless shopper wanders into the frame and watches the robbery from an unsafe distance. I wondered: Who was he? What did he think when the sound of car horns and screeching tires led him to the scene of a $4-million crime? I was sketching out the prologue to Love and Theft, and that anonymous figure helped pick the point—or, rather, points—of view. The opening set piece is seen through the eyes of the cops, gamblers, jewelry store employees and bystanders who track ambitious jewel heist in Las Vegas history.” “This strip of Spain’s southern coast was known as the “Costa del Crime” in the ’80s, a paradise for drug runners and retired British gangsters. It’s captured beautifully in Sexy Beast, Jonathan Glazer’s 2000 black comedy crime film. When I visited in 2017, the region did not disappoint: Russian tycoons drowning in models and bottle service, Middle Eastern royalty behaving badly, all kinds of petty crime. On my first night in Marbella, a friend took me to a barbeque at the bachelor pad of some young, out-of-work bullfighters. Over the course of the evening it became clear that these annoyingly handsome, fearless, and charming young men were running a stash house from the apartment, storing kilos for a local cartel for a fee. When you grew up fighting bulls, you don’t loose sleep over a few kilos in the hall closet. At the end of the night, I thanked the bullfighters for having me, and they thanked me for coming and I thanked them—silently, this time—for inspiring the gang of young criminally inclined bullfighters who help the protagonist of Love and Theft pull off his final job on the Costa del Sol.” “I had already written the opening set-piece of Love and Theft—in which four men on motorcycles rob a jewelry store inside a high-end Vegas mall—when I stumbled on this video. At the time, I worried that my opening scene was unrealistic. But here were six men on motorcycles inside a London shopping center, their faces hidden behind tinted visors as they smash display cases with axes and make off with millions in stolen Cartier and Rolex watches. Like my antiheroes, they were never caught.” “You know you’ve made it in South Jersey when you have a standing dinner reservation at Chef Vola’s, a holdover from Atlantic City’s Rat Pack glory days. The rest us call an unlisted number, leave a voicemail, and wait for a confirmation that almost never comes. The reservation process got a little easier after Chef Vola’s won James Beard Foundation America’s Classics award in 2011, but dinner here, under a low drop ceiling in the basement of an unassuming single-family home, is still a thrill. Pushing through the curtains at the bottom of the stairs feels like the climax of the tracking shot from Goodfellas. Cast members from The Sopranos dine here, along the “made guys” who inspired the show. The portions are last-meal sized, the food much better than it needs to be. In an early draft of Love and Theft, I staged a cartel hit in the dining room. Ultimately, I couldn’t bear to shoot up Chef Vola’s even in fiction and used it as the setting for a hot first date instead.”

“I visited Tulum for the first time after my eighth grade graduation in 1996, when the Instagram darling was still an undiscovered fishing village with spotty electricity. Today, Tulum is all green juice and prenatal yoga on the surface, but Pablo Escobar kept a home here, and the town has an interesting underbelly. One night after the clubs closed, my friend and I went to an afterparty at the home of a commercial crab fisherman who spent three months a year on the freezing waters off Alaska and the rest of his time burning through his earnings in Tulum. At his house that night was a heavily goateed and tattooed man who picked a fight with my friend before deciding that the interlopers from New Jersey were okay. Sometime after sunrise, we were headed into town for water and beer when a local yoga instructor stopped me. “Maybe not the best person to make friends with,” she said. Really? He seemed so nice after the initial conflict. He was a cartel enforcer, she explained. And just like that, a walk-on character in the book was born.” 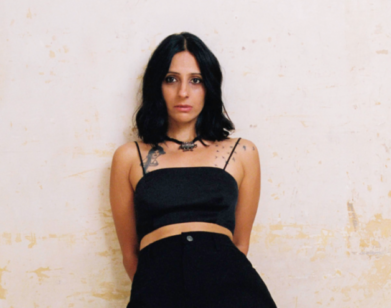