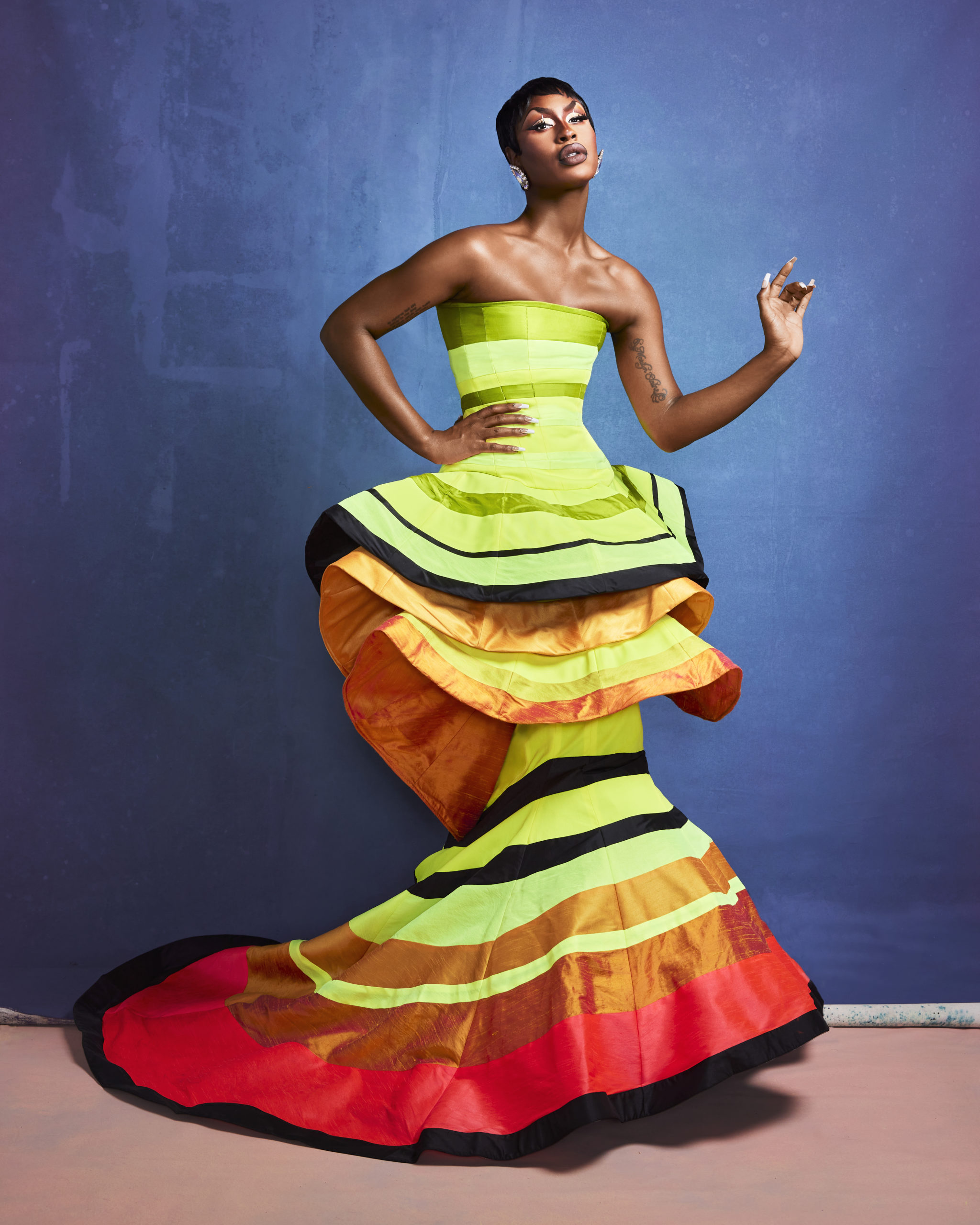 With a musical performance reminiscent of  Janet Jackson in both style and stamina, looks that made RuPaul gag, and a stellar lip sync of Kylie Minogue’s “Supernova,”  Shea Couleé earned her rightful spot in the season seven finale of Ru Paul’s Drag Race All Stars. Though the crown ultimately went to Jinx Monsoon, the experience felt like a graduation for the 33-year-old entertainer. “I feel like I’ve graduated and I’m stepping into a whole other arena” she said of her three season stint in the franchise. Last Friday, Couleé released “Your Name,” a groovy Disco banger that marks a new era for the Warsaw, Indiana native. Below, the queen catches up with Christopher John Rogers, her friend and the fashion designer behind Coulee’s electrifying finale look.

CHRISTOPHER JOHN ROGERS: I’m good. I’m recovering from a hangover as we speak, and I am preparing for the weekend.

COULEÉ: Girl, I had a couple of tequilas last night. I’m like okay, let’s rally.

ROGERS: Well, that’s summer for you.

COULEÉ: Congrats on the newest show. I’m so sad that I couldn’t be there to support.

COULEÉ: They got a bitch out here in Atlanta. She’s working. But don’t worry, I got that pre-order in.

ROGERS: You always go with your gut and get the right shit. It’s giving internal compass.

COULEÉ: I remember the first time I got my CJR haul I was like, “Girl, I put this stuff in my closet and called the rest of my clothes poor.” Very bougie. Especially after I got that Italian puffer.

ROGERS: Literally no one else has that. It’s the only one in the world. I love it.

COULEÉ: It’s coveted. When I did The View I was like, “Let me just put this coat on to walk out to the car.” And Jada Essence Hall was like, “Bitch, only you.”

ROGERS: Was The View the one where you dropped it low?

ROGERS: Period. Do you ever get nervous when doing drag?

COULEÉ: When I was a kid, I was doing theater [and] I had this drama teacher, Margo. She used to say, “If you’re feeling nervous, just shift your thinking and turn it into excitement.” Ever since then, I don’t really get nervous.

ROGERS: I feel like you’re such a confident person. It pours out of everything that you do. Do you feel that way about yourself?

COULEÉ: I guess confidence for me is more about other people’s perception of you versus really how you feel. I remember watching Euphoria. When Lexi did her play there’s this scene where Maddy is doing her little makeup and she’s asking her about confidence. She’s like, “Girl just make it up.” I was like, “Tea bitch.” It’s all a game. I’m gonna go out there. I’m gonna do me. Just know that at the end of the day.

ROGERS: That’s something I had to work on. I’m finally in a place where I feel like I don’t need to prove anything to anyone. I’m such a fan of fashion and art, I’m always surveying what’s happening in the world and trying to make work that addresses that. You want to be relevant and you want to pitch to the zeitgeist, but at the end of the day, you just have to do you. You can’t worry about what everyone else is doing.

COULEÉ: I think that’s what I really love about you. You just have such a specific DNA. There’s no question. Being a fan of yours and watching your brand grow over the years, I love that there are these really great callbacks.

ROGERS: I’m sure you can relate. It’s like when you get a little bit more coin, after you’ve been doing something for a while, the ideas that you had before you can refine and actually hit the nail on the head.

COULEÉ: Yeah. That’s what I was imagining years ago. I love watching those ideas grow. There’s something very romantic about it. I always describe your clothes as joyful. We need more clothing like that in the world because when I wear CJR it’s smiles all around. The ability to make a complete stranger happy by what you’re wearing is rare. ROGERS: Thank you. That’s really what it’s all about, just making people feel something. The clothes are so specific that either you love it or you hate it. I can’t stand when something’s tepid.

COULEÉ: ​​Being polarizing is much more interesting.

ROGERS: Do you feel like recently you’ve revisited old things and made them new?

COULEÉ: There are certain pieces that I just can’t get rid of. Normally it’s little things, little accessories. There’s a knock-off Gucci emblem necklace that I wore for the entrance of season nine of Drag Race. I still pull that out. The real ones know. She ain’t going nowhere.

ROGERS: I love that about your style, it’s not like, “Oh, here’s this full look that I’ve bought.” It feels personal.

COULEÉ: I remember watching this behind-the-scenes interview with Patricia Field talking about her styling for Carrie on Sex and the City—which by the way, Sarah Jessica Parker looked iconic at the Met Gala. I saw it and without even having to look at who the designer was, I knew.

ROGERS: I was so scared people wouldn’t know because there was no color and I kind of loved that.

COULEÉ: Yeah. She said even though Carrie is a big fashion girl who wears labels and things she would always have these pieces she would wear multiple times a season. I feel like in fashion there’s this weird expectation when you get to a certain level that you have to wear something brand new. That’s not sustainable. I want to present fashion that’s glamorous, that’s ethical, and that can be used for years and years to come. I was talking to my girl Tiger Lily and I was like, “I’m about to go crazy on this pre-order.” She goes, “You know what? Money comes and goes, but CJR is forever.”

ROGERS: Also speaking of forever, bitch, I fucking gagged when you came out in Valentino couture.

COULEÉ: They didn’t catch the tea because they didn’t show it, but RuPaul asked everybody “Oh, who did that? I said, “You know, this was designed by Valentino,” and she was like, “Wait a minute, bitch, not you coming with the full couture.”

ROGERS: How did you prep for this season’s looks?

COULEÉ: I knew that I wanted it to feel elevated. I knew that I wanted it to feel in line with where I was at the time and there were moments where I brought massive looks. I also wanted to do something that felt really intentional and something quieter that forced you to really perceive it. I’ve been fortunate enough throughout the years to make these great connections with designers. Even after season nine, nobody was checking for me. So going out to All Stars season five, I still wasn’t quite there yet. I hadn’t really built these relationships.

ROGERS: So when you get the list, are you just manically being like, “Okay, email, email, text, text?” How does it work?

COULEÉ: I spend two days just going on deep dives, conceptualizing. Then I put mood boards together. Once I have the concept ironed out, then I’m like, “Okay, who is the best person for this?” Then I start sending out the emails, the texts, and the DMs. It’s such a head-to-toe experience you know, the wigs, and the nails, and all of that.

ROGERS: What are some of your big dreams that you’ve yet to touch on?

COULEÉ: I’m actually living one right now. I guess we’ll just have to wait until I’m allowed to talk about it. It’s something that no Drag Race girl has done. I am so excited for everybody to see me step up my career in such a major way. I feel like Drag Race has been such an unbelievable dream come true. It’s been such an iconic platform. After doing this three times I feel like I’ve graduated and I’m stepping into a whole other arena. Every day is a new experience. I get to be amongst some of the best people in this industry. It’s just really, really humbling and I’m learning a lot and I’m having so much fun and I cannot wait for everybody to see this.  What are some of your dreams?

ROGERS: I want to continue making work that really makes a statement, but that’s incredibly classic at the same time, where you can pull it out in 20 years and it still has the same relevance. I definitely have a goal to grow the brand into more of a lifestyle brand—even though I hate that word. I have such a strong point of view that obviously could translate well into the home. I love fragrance. There are some cool things that are in the works, so that’s exciting. I’m just expanding the universe slowly. I also want a fucking vacation. I haven’t been on a vacation in three years.