The dictionary definition of “euphoria”: a feeling or state of intense excitement and happiness. The HBO definition of Euphoria: a dark, beautiful, and sexy high school drama series that highlights the intense excitement, happiness, and Juul addiction of Gen Z. Created by Sam Levinson and executive produced by Drake, the series follows a group of really cool (and pretty deranged) teenagers played by Zendaya, Hunter Schafer, Jacob Elordi, and Barbie Ferreira, among others, as they try to navigate adolescence via Instagram, dating apps, drugs, bitcoin, sex tapes—and did I mention the Juul?

Despite what Euphoria might sound like on paper, the series is a gorgeous, terrifying, and often triggering journey into the depths of teen culture in 2019. Spoiler alert: teens are wild. And although the show has made some people mad, attracting criticism for its portrayal of issues plaguing high schools all over the country, there has always remained a constant source of undoubtable greatness in the show: the makeup. Doniella Davy, Euphoria‘s makeup lead, is responsible for ideating all the makeup looks that have graced our screens thus far. From Jules’s (Schafer) airy cloud eyeliner to Maddy’s (Demie) rhinestoned eyes to Rue’s (Zendaya) sad glitter, the makeup is as twistedly riveting as the storyline of each character. Although it is not the first time Davy is involved in a project that shakes the culture—she worked on Barry Jenkins’s Moonlight and If Beale Street Could Talk—it is the first time she’s had free range to “go off with makeup,” as she puts it. “There were hundreds of looks on all the girls, hundreds of outfits, and so many scenes. It moves quickly,” says Davy. “That’s what Sam, the creator, wanted for the characters. There’s no set look. The kids are constantly in flux. They’re constantly evolving.”

As erratic as the world of Euphoria may seem, every makeup look was deliberate and intentional, following the ups and downs each teenager is experiencing—almost akin to its own character in the series. As for what inspired Davy to push makeup to its limits, she credits Gen Z. “This Euphoria style of makeup already existed on Instagram. I’ve admired the freedom of expression that it inspires,” Davy told me over the phone from Savannah, Georgia, where she’s currently working on Jenkins’s new TV project. “I did put my own twist on it as a designer, but really, this is my ode to what Gen Z is doing right now.” Interview caught up with Davy to break down some of the characters beauty looks, and remind us that there is only one rule in the world of Euphoria: there are no rules.

“With a character like Kat, for example, she has this total character transformation, and that was a big conversation early on with Sam. When her character blackmails the McCay twins into buying her makeup, it sets her up perfectly, because it’s like, okay, maybe she didn’t have that much makeup before because she didn’t have the confidence to wear it for whatever reason, but now she has bags full of Mac makeup. It sets her up to start experimenting. We wanted the looks to be different–one day it’s this, one day it’s completely different, because she’s just figuring out what she wants to do with her face. She’s not trying to be subtle and precious. Her looks are meant to be a rebellious, alternative version of glam makeups essentially, and a fuck off to all things perfect and subtle and precious.” “Like Hunter herself, Jules is an artist. I think her looks aim to challenge makeup and beauty norms, as well as have an element of experimentation to them like always. Self-expression and not giving a fuck is her ammo. Her school looks are meant to be very of-the-moment, not over-thought. They’re meant to be cheeky and playful, and sometimes darker and more weird. They’re definitely like a mood ring to her emotion. Each of those looks absolutely is directly tied to what she’s going through in that particular scene. The cloud eyeliner—she’s totally head in the clouds in that moment. Then, as the season progresses, her looks get a little bit darker. The look she wears to school after the carnival, where she has this intense red eyeliner only on her inner eyes—to me, it’s a sick to my stomach look. It’s like she’s carrying a big burden. I wanted her makeup look to feel anxious and sickly.” 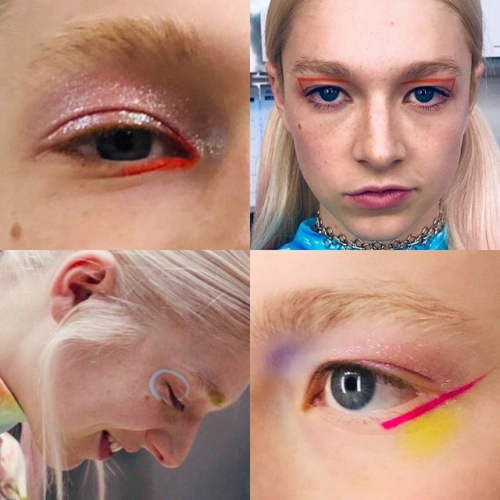 “Maddy has glows of pastels and neons as well, but in a super different style. As an artist, I love neon and pastels. I love what the colors just do to each other, next to each other. I knew I wanted to expand on that and find a way to use that for Maddy’s character. There’s a Nina Simone picture where she has these giant rhinestones in her eyebrows. I was very directly inspired by that for a lot of her looks.” “From early on conversations with Sam, I knew I wanted to use glitter for Rue especially, and I knew that glitter needed to be placed under her eyes to sort of imitate tears. It’s kind of like the sad clown effect, although hopefully not too clowney-looking. Rue is a tomboy and drug addict, but she does wear glitter to parties, which is funny to me, because at first I didn’t think she would. And then I talked to Sam and he was like, ‘Why not? Why wouldn’t she? It makes her more nuanced. Why would a tomboy who’s a drug addict never wear makeup? In Euphoria, anything can happen.’ I always wanted them to have an emotional quality to them. They look like tears, but also seeing glitter glisten around Zendaya’s eye, it just had this captivating quality to it that made me stay on her face.”