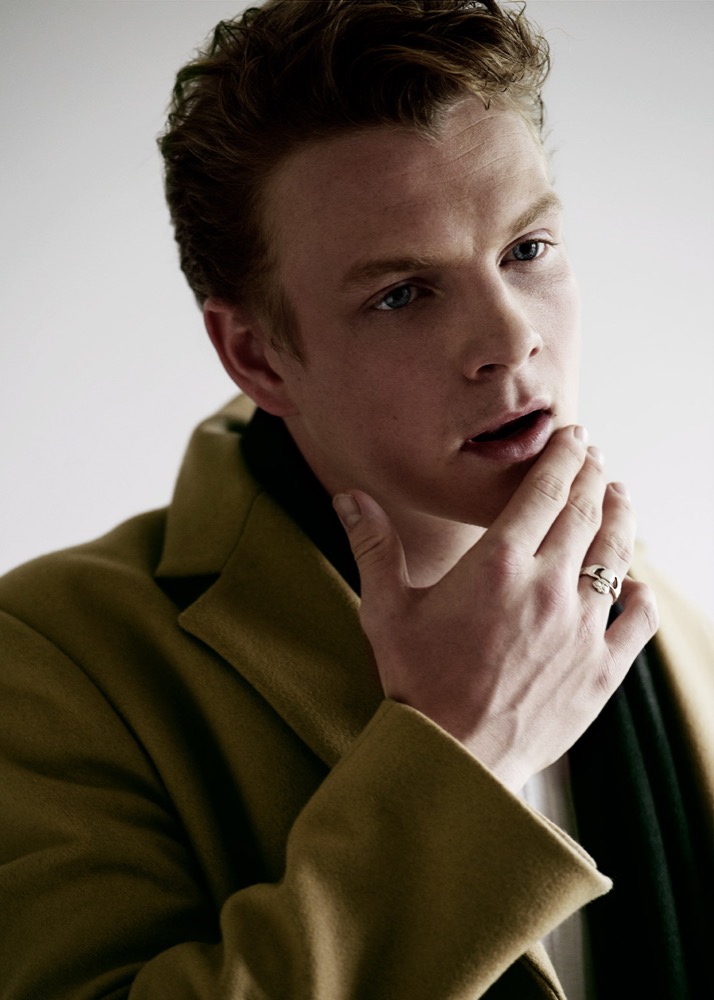 A week ago, Netflix dropped the first eight episodes of The OA, the new sci-fi mystery series from actor-writer Brit Marling and her frequent collaborator, writer-director Zal Batmanglij. There was little fanfare surrounding the release; it had been announced four days before, and for most viewers, it just appeared on their Netflix homepage. Those clicked who clicked on it, however, have been instantly hooked, and Reddit is already full of OA sleuths and conspiracy theorists.

To fully explain the plot of The OA would take away some of the fun, but in broad terms, the series concerns a young woman named Prairie (played by Marling) who returns home after being missing for nearly a decade. Once back with her parents, she’s both desperate to escape again and strangely Zen. She befriends a group of local teens and begins to tell them her story.

Among the show’s breakout stars is Irish actor Patrick “Paddy” Gibson. The 21-year-old Dublin native plays Steve Winchell, a drug-dealing, antisocial teen bully who channels his pain into physical violence. Steve could have easily been a cliché—just another high school stereotype—but Gibson makes his character’s arc extremely affecting. “He’s incredibly reactive, and when he tries to better himself and it doesn’t work, that completely ruins his confidence all over again,” says Gibson of Steve when we speak over the phone. “He thinks he’s not worth being a good guy—it comes from a place of insecurity.”

As a narrator, Prairie is most likely unreliable, and the show frequently questions the veracity of her story. Gibson, however, believes her: “Maybe not word-for-word, but I do believe her ultimately,” he says with some trepidation. “I was looking for clues every single day on set—I think I bugged Zal a little too much. I’m still completely on the hunt. I’ll let you know if I actually ever figure it out,” he adds.

For Gibson, who has been acting since childhood, The OA is the beginning of a particularly exciting time. Next year, he’ll appear opposite Idris Elba in John Ridley‘s series Guerrilla. Then there is Starz’s new period drama, The White Princess, in which Gibson has a leading role. “The OA was the catalyst for this year,” the young actor reflects. “I really felt that I connected with Steve. Then I came home, had a month off or so, and started shooting The White Princess, which was amazing and the complete opposite … we had sword-fighting battles—every kid’s dream. Then, to work with John Ridley in the last month was phenomenal. I have so much admiration for him as a man and as a director.”

INTRO TO ACTING: My dad’s an actor, and my mum was an actress as well, so I’ve been around it for a long time. That’s probably where it comes from—naturally, I suppose. I started acting quite young, doing little adverts and stuff. I don’t really remember the point where I was like, “This is what I want to do,” but I guess it’s always been the case. I do remember being a kid and being like, “I fucking hate this. I don’t want to do this.” I was very young; I was seven, probably. I probably didn’t like auditioning and I’ve also never had much faith in my abilities. The whole auditioning process, I still find really tough. I think at that age, I just wanted to be out skateboarding.

My parents were always great and very supportive of whatever I wanted to do—whether I wanted to act or not. Then, when I worked with Lenny Abrahamson [on What Richard Did, 2012], that made me really interested in exploring characters and opened up a whole world for me that I didn’t really know existed.

A STUDY BREAK: I studied at Trinity in Dublin. I did philosophy. I decided at the end of school that I wasn’t going to get a real job going to drama school, so I thought, “I might as well do another degree that I won’t get a real job with,” and philosophy was pretty high on the list. I  was also really interested in doing it. I decided to do that instead of drama school, but I would love to train—god knows I need it. I’m really interested in doing theater, which would be very new for me.

JOINING THE OA: My agent Claire [Comiskey] called me up one morning and woke me up—it was probably too late to be in bed in the morning. She said, “There’s this character Steve Winchell, I think it’s perfect for you.” So I sent off a tape and there were a couple of meetings with Zal and Brit. I knew about their other films, and I was a really big fan of theirs. I flew over to New York for one meeting, which was kind of terrifying, and then I heard a few weeks after. But it was quite a long process.

FINDING STEVE: It comes so naturally. [laughs] There’s something about Steve, even though he is probably, in a lot of people’s eyes, a total asshole, for lack of a better word. I really sympathized with him immediately. I think he really does change, but in a nice way—he’s not got it all figured out by the end of Season One. I don’t think that’s how it goes in real life. He makes a lot of progress in the show, but he’s still got a journey to go on.

CHARACTER CONNECTIONS: [Prairie] and Steve are very similar in that they’re both kind of outsiders. I think Steve recognizes that in her pretty quickly. She’s this weird chick who’s appeared out of nowhere. He’d kind of heard of her before, but she’s completely unafraid, and other people are afraid of Steve and that makes them push him away and vice-versa. This girl completely sees through that, and I think he’s just drawn to her because of that—more intrigued by her to start with and then he realizes that she could really teach him something.

THE MOVEMENTS: That was a process. We worked with a choreographer called Ryan Heffington. He’s amazing; he did that Sia video with Shia LaBeouf  [“Elastic Heart”] and is a master of movement. For me, it was really different. Acting can be quite constricting sometimes because you’ve got to be quite small when you’re on camera, and learning these crazy movements was really cool. I’d never done anything like it. All the guys—Brendan [Meyer], Ian [Alexander], and Brandon [Perea], who’s actually got dance experience, he’s really good—we used to go and have rehearsals three, four times a week. Now I can never unlearn those moves, they’re embedded in my head. It’s like our secret handshake.

THE O.A.’S OTHER WORLD: I have a huge amount of respect for guys like Emory Cohen, who’s also in The O.A. I was really excited to be in a project with him, but I think we bumped into each other twice during shooting and that was it. It was so bizarre. There’s a whole other world that goes on, and I think both worlds thought we were the only one in the show, and it’s so weird to see it now come together. Jason Isaacs last night was like, “What the hell? I didn’t think you guys had a whole show as well as us!”

PLAYING AN IRA MAN: In Guerrilla, I play Connor, an IRA member and not a very nice kid, but I don’t really feel justified pulling the stereotype card. I’ll take what I can get. Joking aside, especially in the context of the story that they’re telling—the series is based around the Black Power movement in the ’70s—I’m fine to play an IRA fella. It’s funny, because the accent is totally different, it was a Northern Irish accent, so even though I was playing Irish, it was one of the more challenging accents I’ve done.

SWORD-FIGHTING FOR STARZ: In The White Princess, I play “The Boy.” People who’ve read the book, they’ll know the character, though the series is slightly different. He’s  a boy who comes back—he’s been missing for years—and makes a claim to the throne. That was very different to Steve—a lot more innocent and nice, which, weirdly, I found harder. I’m not sure if that’s a sign that I’m a dick or not. [laughs]

SEASON ONE OF THE OA IS NOW AVAILABLE ON NETFLIX.