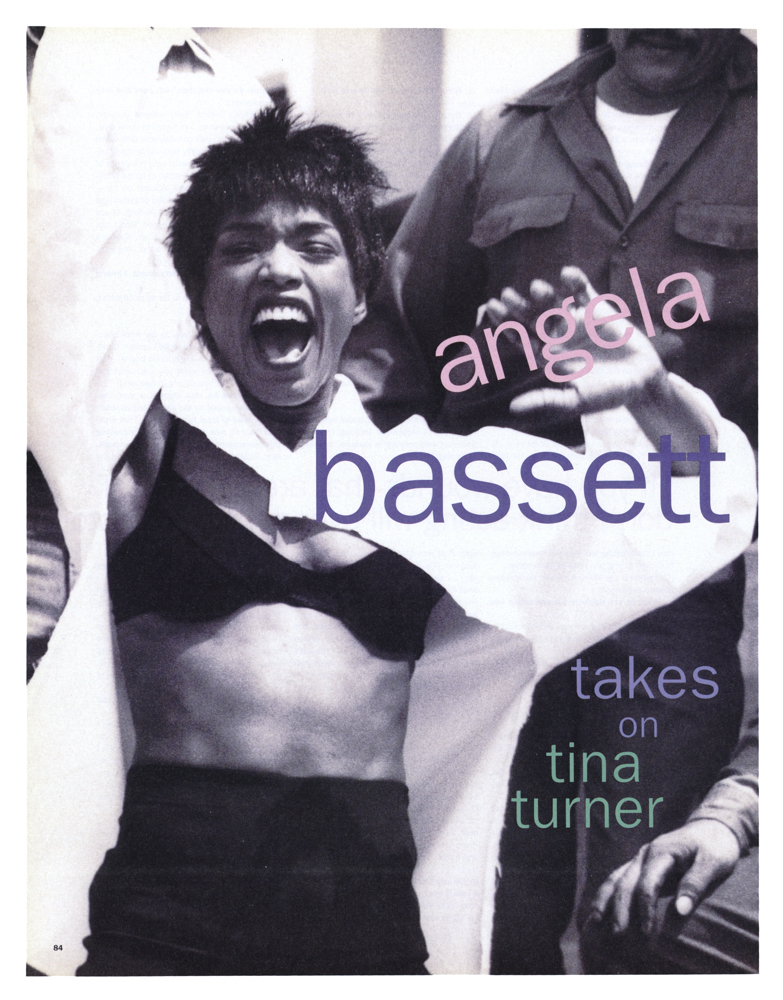 Angela Bassett received her first Golden Globe in 1994 for her monumental performance in Tina Turner’s biopic What’s Love Got to Do With It? Though she was once intimidated by the idea of stepping into a diva’s shoes, more than 20 years later, she’s still confidently portraying stars of the screen. In American Horror Story’s latest iteration, American Horror Story: Hotel, Basset plays Ramona Royale, an action-movie star of the ’70s who lost her way after falling in love with a countess (Lady Gaga). Now Royale is returning to the hotel seeking revenge. Basset first joined AHS in 2013 as Marie Laveau, a voodoo high priestess in American Horror Story: Coven, starring opposite Jessica Lange. She then was nominated for a Primetime Emmy for her performance as Desire Dupree, the three-breasted woman in AHS’s Freak Show.

In celebration the queen of horror’s latest role and anticipation of tonight’s episode, here we look back at an interview with a 36-year-old Bassett, in which she discusses her biggest role at the time: Tina Turner. —Kira Harada-Stone

Angela Bassett has a halo above her head. As Betty Shabazz in Malcom X and Michael’s mom in the ABC miniseries The Jacksons: An American Dream, she was canonized as the Strong Black Woman. Adding raunch without necessarily forsaking saintliness, she now shakes a leg as Tina Turner in What’s Love Got to Do With It?, largely based on Turner’s 1986 autobiography, I, Tina. The title song points up more than the survivor subtext—it was Turner’s first big solo hit and marks her life since Ike (played in the film by Larry Fishburne). On the phone from her home in Los Angeles, Bassett eagerly explains what it was like to impersonate the Great Wigged One, whose footprints are so large it makes you wonder why Touchstone Pictures didn’t have Turner play herself, and be done with it. But it’s Basset’s ball, and there’s not doubt she’s running with it.

THERESEA STURLEY: Why did you play Tina Turner?

ANGELA BASSETT: ‘Cause they offered me the job. I didn’t think I could do it. I thought, “Oh, they’re doing a Tina Turner film. I can’t wait to see who plays her.” My agent says, “Angela, go in. The casting director wants to meet you and see if you could resemble her.” Okay, I think I could—high cheekbones and full mouth. Hmm. She’s 5’4″ and so am I. Hmm. She’s 34-26-38, hmm, that’s kinda close. But I play all these mothers and really strong women. She’s a singer, a dancer, and a performer, and just looks sexy. I’m not gonna… I couldn’t… I just don’t… I can’t even imagine portraying her… Oh, my gosh. But I go in and meet him, and it’s okay, physically, face-wise. Hey, it’s not so farfetched. “Here’s the script.” “All right.”

STURLEY: This is your biggest role so far. Was it intimidating?

BASSETT: It was the most challenging thing I’ve done. Seventeen hours a day. You’re basically in every frame of the movie. Your emotions are called up all the time. I would have my little mini-breakdowns just before dance rehearsal. Then I’d think, “I don’t think I got this role because they want to see me fail miserably at it. I got it because they think I can do it. Okay, I’m ready. What number’s up first?” “Shake a Tail Feather.”

STURLEY: Being something of a purist as an actress, how did you feel about lip-syncing Tina’s singing?

STURLEY: Was it difficult to have her watch you perform her numbers?

BASSETT: I was nervous because it’s, like, she’s Tina Turner. Here is Tina Turner, and I’m playing her. She did my hair and my makeup, and she said, “Now go on up there and perform ‘What’s Love Got to Do With It?’ and I’m going to sit here and watch you.” She was wonderful because she’d say, “Okay, Angela, let’s do it this way,” or you could ask her, “What’s that step again?” and she’d say, “Just do the pony like this, and everything else is perfect.”

STURLEY: She was giving you her blessing?

BASSETT: Yeah. One particular day she had a white linen Giorgio Armani shirt on and she was, like, “Can you wear this?” I wear it in a scene where I sing “I Might Have Been Queen.” So I tell people that Tina Turner will give you the shirt off her back!

STURLEY: Do you think it was painful for her to relive it all again?

BASSETT: It wasn’t easy for her to be there for the early years of Ike and Tina. Those were painful years—why sit and watch it being portrayed? What’s important to me was how truthful it was to her, not “is Touchstone happy?”, or the director, or the producers, or the Ikettes. I was portraying Tina, and I just felt a responsibility to her. I wanted her to be pleased.

STURLEY: Don’t you have a responsibility to the story? The story isn’t always what she wants it to be, is it?

BASSETT: There was the book in all its brilliant colors, and I read and reread the book. There are some things in the book that aren’t in the film. We’ll never know from the film, for example, that her first child was by a musician in Ike’s band and that Ike then made his common-law wife and Tina pregnant at the same time.

STURLEY: The film can’t go into the complexities that Tina will willingly acknowledge were part of her life?

BASSETT: She’s extremely honest in her autobiography. We did as much as we could in two hours and fifteen minutes.

STURLEY: Where does Angela Bassett meet Anna Mae Bullock—the real Tina Turner? Where inside yourself did you find the part?

BASSETT: I’m from the South, also. I can remember dreams of being an actress, growing up in the project in a small southern town. I wanted to be an actress, she was a singer. She went north, I went north. She had problems with self-esteem, and I battle with that, too. Am I good? Can I do it? Do I deserve it? We all do that, I suppose.

STURLEY: What were your perceptions about Tina, going in, and how have they changed?

BASSETT: I think I saw her like everybody else—in those short dresses, the hair just intense, sexy, vivacious. All I knew, until I read the book and learned about the abusive relationship she was in, was the stage persona, “lights, camera, action, strut, Pony.” Once I began to play her I saw her as a homebody, compassionate and very giving and more like me than you’d think. Then she had to survive all Ike’s abuse, and although I’ve never been abused physically—thank God—I’ve seen it.

STURLEY: Why do you think she stayed with Ike for almost 20 years?

BASSETT: Tina is very loyal. She promised him, “All those other people you helped, they left you. Well, I’m not going to leave you.” Then after a while it was, “This ain’t gonna be no marriage; this ain’t gonna be no little-girl dream.” Then it’s denial; she had to hide all the black eyes. “Why am I staying? I promised him I would stay, and the relationship is changing. He beat the crap out of me, but he is my husband, he is the father of my child, and I’m here and I don’t know what I can do.” She saw the door and still she couldn’t walk out. Then she converted to Buddhism, and she became stronger and stronger. One day he pushed her too far and it was like, “Fuck you, Ike.” And she started to push back.

STURLEY: How did you work with Larry Fishburne to make the relationship between Ike and Tina believable?

BASSETT: Larry is an incredible actor, and I felt so comfortable with him. There was so much pain in this story that you really needed someone you could trust; then we could make the risk go just as high as it could go. You have to believe that you’re totally safe so that you won’t get hurt, physically and emotionally. We made every altercation a little bit different. We tried to delve a little bit deeper. This is a situation that happens. We know somebody who’s been in it. We hope to shed a little light on human behavior. But though it is ugly at times, Tina is a survivor and she survives a situation that is common.

STURLEY: Having acted it, can you imagine living it yourself?

BASSETT: No, no, no. Playing it was hard enough.

BASSETT: It was just, move it. Do a Tina move. I ended up doing that. But at least I got to have pants on—leggings as opposed to a miniskirt, where you can see my legs. Tina has legs; I don’t. I have the upper body. When I went for the audition, it was like, “I’m not going to come in here and serve legs because she’s known for legs. I’m going to come in here and serve acting because that’s what I have to offer.”

STURLEY: A lot of publicity for the film has focused on Tina. Normally it would spotlight the lead actor—you. How does this make you feel?

BASSETT: This woman is so incredible. She’s a hero to so many people. I think she deserves it. If they want to put her on all the covers of the magazines, that’s fine. But when you go to see the movie, it’s going to be my face up on that screen. If there’s an Oscar nomination, they’re gonna nominate me.

STURLEY: Is it difficult playing an icon?

BASSETT: People confuse the person and the part. Some members of the band who were in the film said, “Oh, you should come onstage and do a duet with Tina when she’s on tour.” I was like, “Are you crazy?”

STURLEY: So Angela, what’s love got to do with it?

THIS INTERVIEW ORIGINALLY RAN IN THE JUNE 1993 ISSUE OF INTERVIEW.