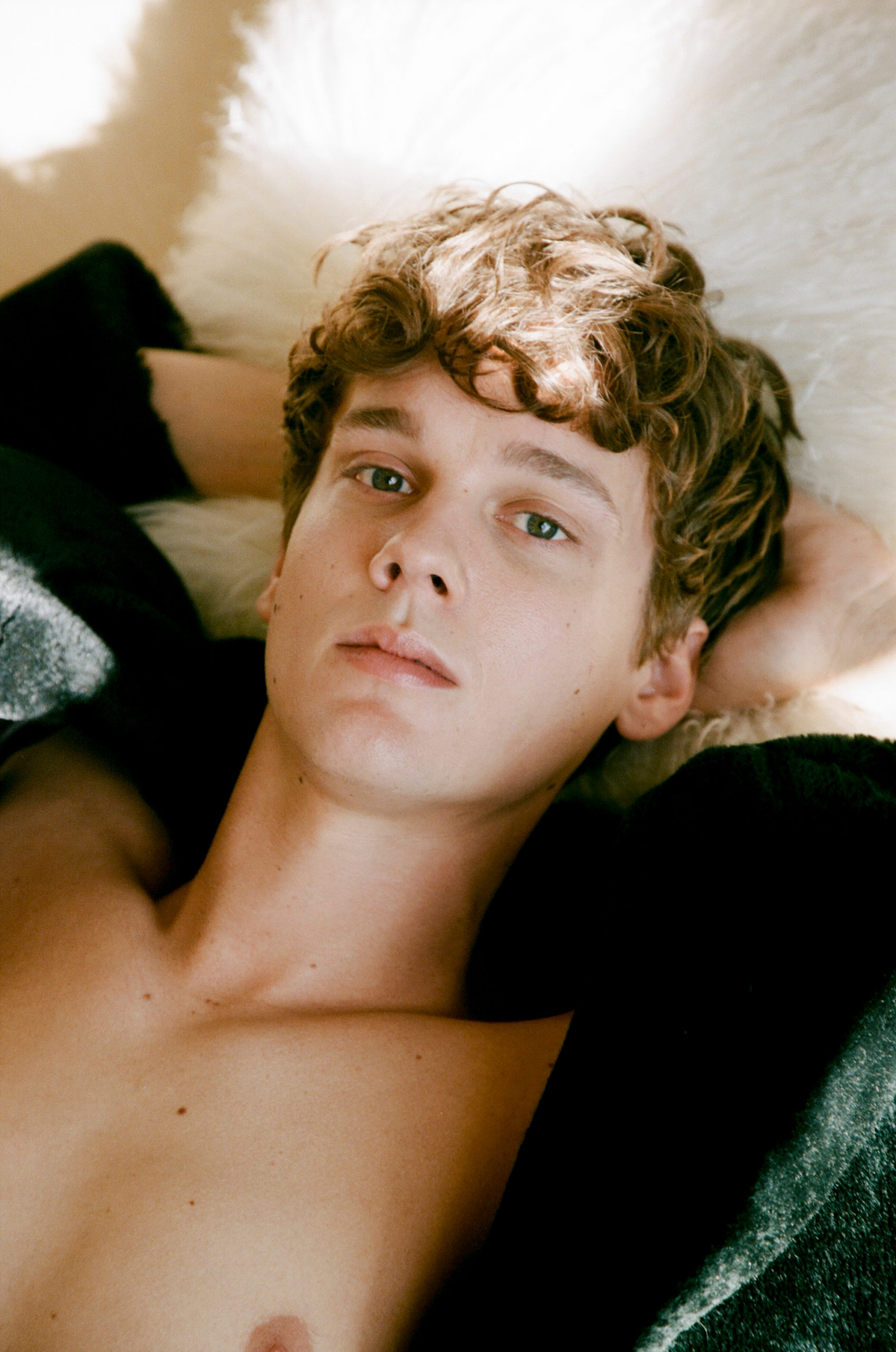 Vintage Jacket (worn throughout) Stylist’s Own.

The night before the biggest audition of his career, Hunter Doohan went to see Network on Broadway. On stage, in the role of Howard Beale, was Bryan Cranston, the Emmy- and Tony Award-winning actor—Walter White himself—and Doohan’s scene partner the following day. “I’m not sure if that was the smartest move,” Doohan admitted to his co-star when they reconnected for this interview. In case it wasn’t clear by now, Doohan got the part.

In Showtime’s limited series Your Honor, which just ended its ten-episode run, Doohan plays Adam Desiato, a high schooler, who, in the pilot episode, is involved in a hit-and-run accident that leaves another boy dead. That boy’s father (Michael Stuhlbarg) happens to be the top crime boss in New Orleans, so instead of turning himself in, he and his father, a prominent judge played by Cranston, decide to keep his involvement a secret. A short while ago, the fictional father and son reconnected to talk about how their off-screen relationship affects their on-screen one.

HUNTER DOOHAN: Hey. Nice of you to join us.

CRANSTON: That’s the way it starts, huh? Some of us have enterprises to run.

DOOHAN: You were being fashionably late to assert your dominance here.

CRANSTON: That’s it. It’s a power move. Actually, I just finished another interview and praised you. I have to make sure I call them back and make some amendments to that.

CRANSTON: Well, actually, doesn’t it kind of strike the tone of a father and son, the smart aleck teenage kid and the very knowledgeable, worldly father?

DOOHAN: That was a very kind description you gave yourself.

CRANSTON: Well, I knew you wouldn’t say anything nice about me, So I have to do it myself. This was kind of the relationship we had, to give the reader an idea. I’m probably just old enough to be your father. But we had a good time. It was hard for me, especially in the last couple of months. I don’t know how you felt about it.

DOOHAN: With COVID and all the new restrictions?

CRANSTON: Yeah. A lot of the fun was taken out of the experience of acting. That part is the cast get-togethers that we had prior. Not only is it fun, but it’s important to bond and feel really comfortable with each other.

DOOHAN: We didn’t get even one rehearsal without those shields on our faces.

CRANSTON: That made it especially difficult. I’ve been around since rock and roll was created; since rocks were created. I am absolutely sure that of the number of concerts that I’ve been to, I have suffered some hearing loss. And so, here we are now, two actors wearing these. The kind of shields we had went around the neck, so it didn’t make any creases on your forehead or your hair. So all the sound is going up as opposed to the other person, so the ears were really tested. And if it’s an intimate scene, it’s even more difficult. It was really challenging. You couple that with not being able to say, “Hey, let’s grab dinner tonight. I want to talk to you about this scene,” or, “Let’s just get together and hang out a little bit.” That was frowned upon, so we just didn’t do it. I worked and went home. It was tough.

CRANSTON: But I guess we got to say, “All in all, we’re still very lucky to be able to do what we do for a living.” It was necessary to give everyone as much safeguard from catching the disease as possible. And we made it through. We were very fortunate.

DOOHAN: Yeah. I was just so relieved we got to finish the thing.

CRANSTON: Well, before we were shut down, we had six months of working together. We were under normal conditions, so we were able to establish a bond, a trust, a fondness for each other, to be able to do the scenes and give each other what the other person needed in the scene, and exchange that. We were able to do all that prior, and four months before that, I met you in New York when we tested for the role. So we were able to break the ice then. We had an established relationship.

DOOHAN: If we didn’t have that, I would’ve been so nervous. If I had just met you on Zoom and then had to just go in and start acting with you, that would’ve been terrible.

CRANSTON: Wow. Do I intimidate you that much?

DOOHAN: Well, before I got to know you, you were doing Network on Broadway. I bought a ticket and went and saw you the night before my test. That might’ve been a huge mistake. I was literally down in the audience looking up at you, and already admired you from Breaking Bad. Then, all of a sudden, you’re this larger-than-life figure up on a stage. And then, I’m supposed to go in the next day and have all these intimate scenes. I’m not sure if that was the smartest move.

CRANSTON: Before you had the job, I think there were four actors vying for the role, and this is the final audition. You already worked through the maze and got to this point. So, we knew that all four of these young men were good. It was just a question of who rose to the top. I can honestly say that it was unanimous from all the executive producers who were there or witnessed it on tape. My job was not to show any kind of favoritism toward anyone. I wanted to give each actor as much of my energy as I possibly could. My job was to be equal, and it wasn’t until after that we all discussed it and decided that you were the best candidate for the role of Adam. And we weren’t disappointed. You really came through.

DOOHAN: That’s nice to hear. I wanted to say you guys are jerks if this was such a unanimous decision. You made me wait the longest week of my life to hear back after that audition.

CRANSTON: We had to be thorough. It always feels great when you find that character. I’ve been on the other side now, producing, and you’re hoping that someone really pops through. The worst thing is you do this whole test with four guys, and if no one rose to the top, you’re like, “Oh, man. We’ve got to go through this again. We didn’t get anyone.” It’s really dispiriting when someone doesn’t. When someone does, like you, you go, “Thank god. That one big issue is now solved. We can move to the next issue.” And so, we’re grateful when someone comes in and grabs a hold of a character and claims ownership. DOOHAN: Getting to do that final audition with you really brought it to life. Like you said, we’d been through so many rounds at that point. It’d been like four months of auditions. I’d gotten used to reading with my friends for the self-tape, or with casting assistants, and then I got to go in there with you, and to get a line like, “Adam, look at me,” and you literally grabbed me by the face.

CRANSTON: Oh, did I?

DOOHAN: Yeah. You were definitely giving me your all. Thank you.

CRANSTON: I just want to see how an actor responds to a spontaneous moment like that. I don’t remember doing that.

DOOHAN: I just really wish you had warned me about that.

CRANSTON: But there are actors that may not feel comfortable. And so, I needed to know that I could be close, be able to hug you, and be able to convey that sense of history. And you were right there with me. I think that’s what makes it work. Looking at the episodes now, I go, “Well, that feels like a father-son relationship. It feels honest.” That’s why I wanted to have you come over and why I wanted to have lunch with you before we left, and why these outings were important. It’s important for the work. Let that be a lesson for you, young sir. When you are number one on the call sheet and you’re like, “Okay, we’re casting a young brother or something like that,” get to know that kid. Take him out. You have to really have a sense of familiarity and comfort with each other so that when you’re working, that comes through.

DOOHAN: You had even given me that advice when we first got down to New Orleans about the girl playing my love interest on the show. Just getting to hang out and feeling comfortable, so you didn’t have the little giggles and awkward jitters when you get to those intimate scenes. It was really helpful.

CRANSTON: What we realized out of this pandemic is that we are such social animals, and confinement and segregation are not comfortable to us. Even if you can’t be tactile, if you can’t touch or hold a hand. Forget shaking hands anymore, but, even hugging someone. It’s such a comfort to be back home now with my wife, to be able to not wear a mask in the house and be able to be with her. It’s crazy, but those simple issues of life that we took for granted before are now so valuable to us.

DOOHAN: Do you ever get nervous about your work?

CRANSTON: No. Our job is to put all our effort into creating it, delivering, and executing it. And then, our job continues, like with this week, to promote it and to herald in the attention for something that you’re proud of. What happens after that, if people respond to it, I’d be very, very pleased with that. But, there’s not much more we can do than say, “Hey, this is a really good story. We think you’ll be emotionally invested in these characters, and we hope you enjoy the experience. It’s a bit harrowing at times, but stick with it and hope for the best.”

DOOHAN: I wish I were as cool as you, but it’s not up to us, ultimately, how people react to it. It does deal with a lot of sensitive stuff, but we’re not teaching any lessons or anything. It’s just set in our world, and it just can’t help but deal with these sensitive subjects.

CRANSTON: I’m glad you’re anxious about it, Hunter, because you have a vested interest in this. You’ve put in a lot of hard work, a lot of time and a lot of energy, and you don’t want it to be just unappreciated. That’s a natural feeling, and with our help and trying to promote it and talk about it and tell people about it, that’s the whole point. There’s a lot of competition. There’s a lot of different things that people could be watching instead. And so, we have to try to guide them to this, and by doing so, I think we’re doing the best we can. Styled by David Gangel at The Only Agency. Grooming: Stephanie Hobgood at Cloutier Remix.