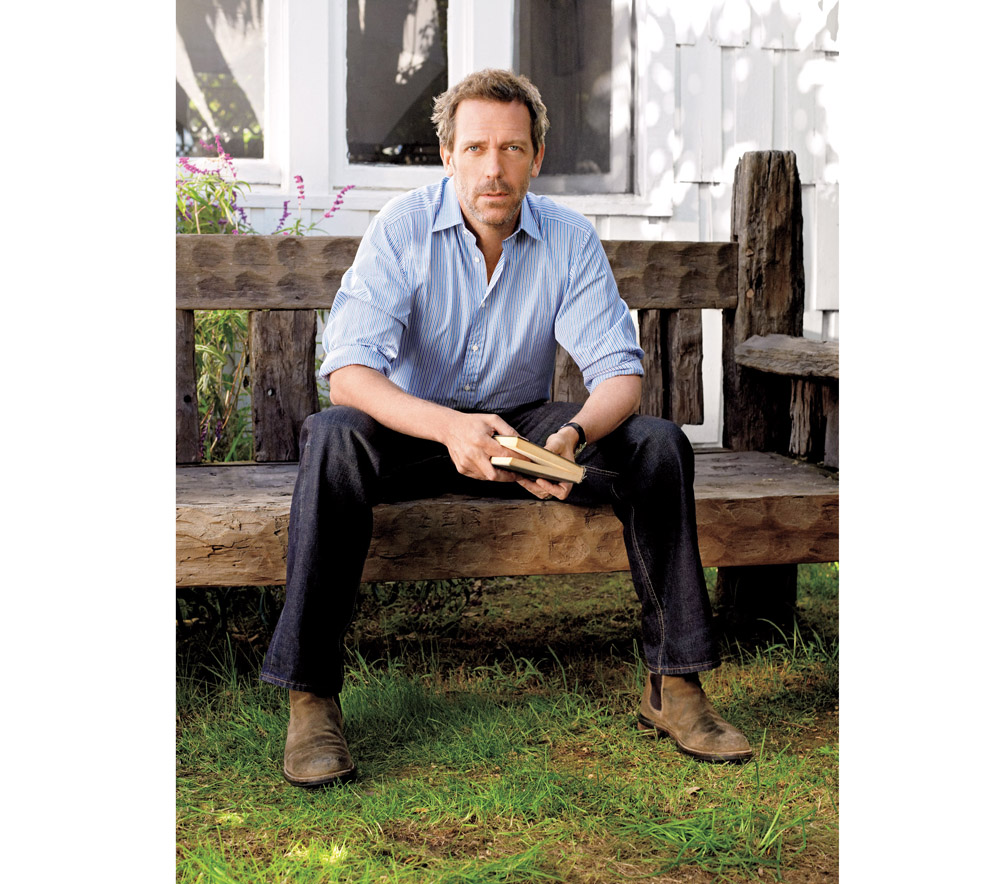 Everyone knows Hugh Laurie as the gruff, witty physician Dr. Gregory House on the Fox TV series House M.D. But there’s much more to the 49-year-old actor. For example, like his father, Laurie was a champion rower. He also attended the prestigious Cambridge University, making a splash in its Footlights drama society. He got his first whiff of fame in the mid-’80s, when he formed a comedy team with his good friend and fellow actor, Stephen Fry. He has also written a mystery novel, The Gun Seller, which has undergone multiple printings, and is working on a second book-The Paper Soldier. Here, he talks with fellow Cambridge alum Emma Thompson.

EMMA THOMPSON: I suppose we ought to confess to Interview magazine that we did go out with each other for a short while.

HUGH LAURIE: We stepped out, yes.

ET: Yes. What people don’t know is that you were, in fact, twice the size you are now in those days.

ET: You were enormous. You were like a fucking giant. You trained the entire time and ate six steaks at every sitting, because of all the protein the rowers have to eat.

HL: I ate people at that time, I do remember. This is a rather grizzly detail-

ET: That rowing thing was very, very powerful. Okay, so you were head boy at Eton.

ET: Maybe you weren’t a scholar, but you are very, very clever. I’ve always said about the two of you, you and Stephen [Fry]: Stephen is very-very-very clever, but I think you’re more of a lateral thinker.

HL: Stephen’s memory is absolutely prodigious. I believe that Stephen has never forgotten anything he’s ever read.

HL: That’s certainly how it feels, anyway. I have resolved to pick one novel and just read it over and over again for the rest of my life, because I cannot remember anything anymore.

ET: Do you know how many people you’ve slept with?

HL: You know how many people I’ve slept with?

ET: No! [laughs] I could hazard a guess. But I mean, no. I know how many people I’ve slept with. Sometimes I amuse myself-when I’m having difficulty sleeping I will go through it.

ET: What’s the most valuable thing your parents taught you?

HL: Yes, when the sun strikes it at a certain angle, it feels like guilt.

ET: How long does it take to shoot your TV series, House?

HL: Well, leaving aside the strike, a season is about nine or 10 months.

ET: So then, in between, you go back home, so you don’t experience, as it were, life as a star in L.A. You come right here to England. What’s it like here now? Is it different? Has it changed?

HL: No. It hasn’t, in fact. Because House hasn’t made much of an impression on British television, I am able to move about the place unhindered and without people having any sort of violent opinions about it one way or the other.

ET: It sounds a bit as if you thought, Fuck, I’ve worked all this time and I’m not getting any of the perks. I don’t mean being famous is a perk, because one knows that it’s not necessarily a perk, but there are certain perks to being well-known and respected in one’s field. Public perks. Like, I don’t know, general friendliness and willingness to please, just to point out two. Do you feel like somehow you’ve been denied that?

HL: No, I don’t. I don’t at all, actually. I’ve been incredibly lucky. I think it’s worked out extremely well that I am able to be who I was and who I am in the place where I live. I went to Spain for a few days, and Spain is . . . They’re nutty. I had a bodyguard, for Heaven’s sake.

HL: It’s not really in the national character.

ET: When we’ve talked about the U.S. in the past, one of the things that has certainly drawn our fire has been the tendency toward sentimentality.

ET: Yet it doesn’t seem to haunt House. Have you come across it? Because it is definitely there, don’t you feel, in the U.S.?

One of the interesting things about doing House is that an audience of Americans has actually embraced someone so starkly and brutally cynical. HUGH LAURIE

HL: I do feel it there. But then, one of the interesting things about doing House is that an audience of Americans who might, as we suppose, turn toward the sentimental, have actually embraced someone so starkly and brutally cynical. Although, of course, the show is actually conceived by Canadians.

ET: But see, I think underneath that American sentimentality, there definitely is a much, much more realistic attitude to people.

ET: I do. I think, funnily enough, there is, as it were, an opposite reaction in England in the sense that we all look cynical and sort of reserved, and in fact, I don’t think that we are. I think we’re softer, in a sense.

HL: I think there is much in what you say. We have had some various peculiar fevers of sentimentality.

ET: Didn’t you once have a convertible? I have a memory of us driving around in a convertible. It’s just come to me.

ET: I don’t know why that came to me then. Just I remembered that you did have a convertible, and you drove me around in it somewhere, and I can’t remember where it was, but anyway, in the mist of time . . .

HL: Do you think a convertible betokens a flippant mind?

ET: No, I think it betokens a time where traditionally people think a person is more carefree, is more open to, as it were, a convertible lifestyle.

HL: By the way, are we deserving to be happy?

ET: Well, it’s back to what your parents told you, that you’re lucky, which basically means that you’re going to have to work for the rest of your life to deserve that luck.

ET: I met you at a Footlights audition, in Cambridge, 30 years ago. Now, do you have any recollection of that?

HL: I actually do. I remember being-

HL: Yes, although I didn’t walk around the place thinking, I’m 19. That wasn’t in the forefront of my consciousness. But I was dragged to this . . . it felt a little like a dungeon. Of course, it was actually a rather nicely appointed chamber, but it felt like-

HL: Yes. A windowless dungeon by a woman called Allison.

ET: You had to be the Emperor of China, because it was very funny. And I turned around to Martin Bergman and said, “He’s a star.” I’ve told you that story before.

HL: Oh, yes. But here I am, vocally blushing. Now, you, may I say, were already a star. People spoke of you in hushed tones.

ET: I hadn’t done anything by then.

HL: But Bergman, he knew the stuff of which you’re made.

ET: We had already done a sketch, though, actually, a couple of years before. Because he was in his last year when you and I turned up.

ET: I think it made him attractive to an awful lot of women in Cambridge.

ET: They did then.

HL: They did back then!

ET: Come on, it’s 30 years ago, Hugh. You wore a long black cloak, for crying out loud.

HL: A cloak. What was I thinking? I really can’t. I just read an 800-page history of the Scottish Enlightenment and, honestly, I may as well just start it again now, because I cannot remember a single thing. I can barely remember where Scotland is.

ET: I have a very clear memory of your book.

ET: Yes. The Gun Seller.  I read it twice. I don’t know whether people know that you’ve written this wonderful book, but they ought to go out and read it right now, because it’s hysterical. I remember there’s a piece in it where you describe walking upon virgin snow and you describe the snow. You’re saying, “Oh, no, please don’t walk there.” I get that feeling with virgin snow. You don’t want to walk on it, because it’s this utter destruction of something absolutely perfect.

ET: And defenseless. Exactly. And what do we do? We turn it into slush? How typical of the human race.

HL: No. I don’t think so. I have misanthropic days-or half-days. I can get into a sort of muttering, curmudgeonly state. But no, I don’t think I am overall. Believe it or not, perhaps I don’t show it much, or well, but I think I like people.