The world is gagging for House of the Dragon, HBO’s fiery Game of Thrones spin-off about the fall of House Targaryen. Playing Rhaenyra Targaryen, the heir to the Iron Throne, is Emma D’Arcy, the British actor who’s a natural fit to rule over the Seven Kingdoms. Interview editor-in-chief and GoT superfan Mel Ottenberg jumped on the phone with D’Arcy for a five-minute chat about epic sets, long takes, and high-adrenaline performances.

OTTENBERG: Thanks for getting on the phone with me for five minutes.

D’ARCY: No, pleasure. Thanks for making it work today. 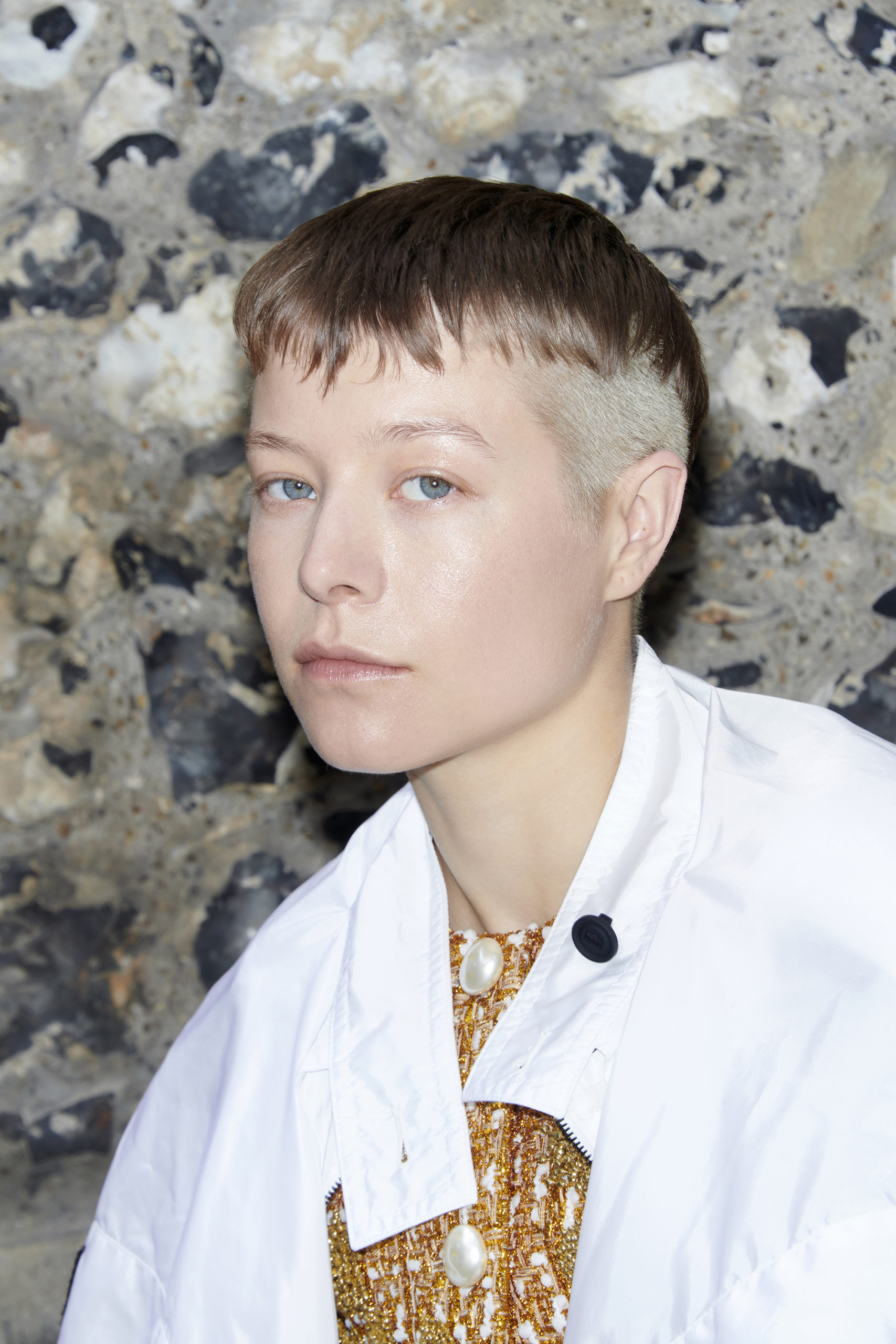 Jacket and Top by Louis Vuitton.

OTTENBERG: Yeah, of course. Where in the world are you right now? OTTENBERG: Are we into it?

D’ARCY: It’s hard to say, because I think I’m having quite a specific experience. It’s possibly not truthful to where I actually am. It involves being in a hotel and getting into cars without necessarily knowing the destination.

OTTENBERG: Absolutely. So Emma, being a royal in House Targaryen is so iconic. What’s your relationship with GoT? We’re obviously fans.

D’ARCY: I hadn’t seen it before I auditioned, which I honestly think is the only reason I’m able to do the job. There’s no way I’d have made it through the audition process if, at that time, I had the love for the show that I have now. I think I’d have buckled under the pressure. Jacket and Dress by Ottolinger. Sunglasses by Hood by Air x Gentle Monster.

D’ARCY: I was aware of the show as a cultural phenomenon. I haven’t lived under a rock and it was very much in my peripheral awareness.

OTTENBERG: Emma wasn’t a nerd for GoT like I was. I totally get it.

D’ARCY: That came later. It came at the ideal time, actually, in the run-up to finally shooting.

OTTENBERG: That’s so cool. What was shooting the show like?

D’ARCY: To be honest, I think one of the most striking things, and this is going to sound very obvious, is the sheer scale of the thing. It’s sort of inescapable in every aspect: the size of those sets, the length of the shoots, the size of the cast, the thousands of people who are working on it across multiple departments. The thing that I hadn’t anticipated before we started filming was the time that that scale affords. It was only after the first month of filming that I finally understood what my job was, which is to just show up, be present, and see what happens.

OTTENBERG: I mean, that is the dream.

OTTENBERG: What was the hardest part? Coat by Schiaparelli Haute Couture. Top and Skirt by Ottolinger.

D’ARCY: Fundamentally, the ultimate challenge is having the stamina to shoot for that long, and you’re doing these huge scenes that maybe have at least 20 to 30 cast members, then hordes of supporting artists in these huge rooms, and they’re playing at high emotional stakes. And you might be doing that for two weeks. Finding new resources to mine after ten days of one emotionally demanding scene is challenging.

OTTENBERG: Incredible. What makes a Targaryen?

D’ARCY:What fundamentally makes a Targaryen is an inner fire that is, in some way, in your genetics. She runs hot, she’s volatile. She has this inner burning fuel that she has to learn to manage, to trust, and to dampen at times. Fire’s a really dangerous ally, but it can also be a profitable one.

OTTENBERG: That was the perfect answer. When did you know that you were an actor?

D’ARCY: Wow, good question. The first time I ever had that incredible adrenalized buzz of performing in front of someone was when I played Titania in a children’s production of A Midsummer Night’s Dream. It had songs in it, and the language was less complicated. But I remember coming off—you know, I say stage, I mean the trestles in our school hall—and going out into the playing field and just running and running and running. And so I got a taste of the drug then, I think.

D’ARCY: And then I started playing with the form much more when I was at university, making theater with friends in our spare time. Coat and Boots by Y/Project. Sweatshirt by Martine Rose.

D’ARCY: Yeah. This is the first job in which I’ve brought my nonbinary identity to work. And part of that was because HBO asked me what pronouns I use, and I thought a lot about whether this was the right time. The reason it’s important is that there was a point, earlier in my career, where I really worried that it wasn’t possible to be an actor if you aren’t a cisgendered person. Typically, within casting sites, there are two columns, and I wondered if those two identities were going to have to live separately in order for me to have a career. The reason I decided to be honest in my presentation professionally is that I really hope that younger people who want to do this work know that there is absolutely space and that space is opening up.

OTTENBERG: I’m glad I asked you that question, and that’s really inspiring, Emma. Alright, I have a few more questions. Did you read all the books?

D’ARCY: I have not read all the books. I’ve read the book that relates to the work we’re making, Fire & Blood. Not least because it’s very exciting to read ahead and get spoilers on your own story. Highly recommend that.

OTTENBERG: Exactly. I’ve read the first three, but I need to hit Fire & Blood on my summer vacation. Last question. Can you describe your style in three words?

OTTENBERG: I love it. Good luck this fall, and I hope you snatch the Iron Throne, Emma.

D’ARCY: Thank you. Yeah, to be continued.

OTTENBERG: Okay, cool. Well, have a good one.

D’ARCY: Thank you, what a pleasure, cheers, Mel. Coat, Bodysuit, and Trousers by Alaïa.