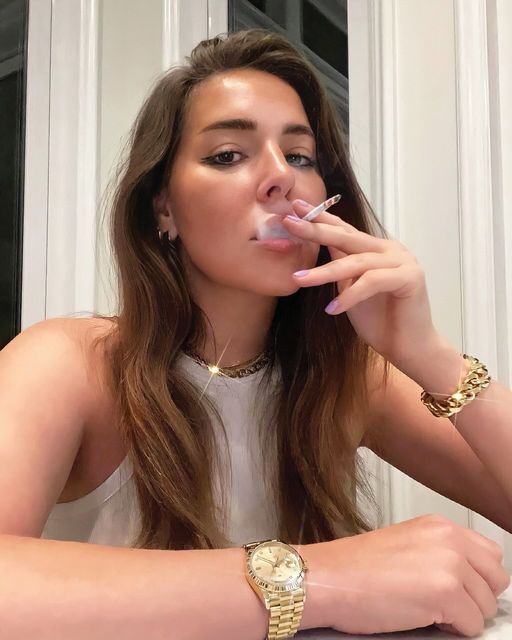 All photos courtesy of Pierce.

“Hello rats.” That’s how Alexandra Pierce, the woman behind the mid-range jewelry line HRH Collection, greets her YouTube followers—or students, as she calls them. These days, it’s hard to tell who is being real online, and who’s just another elaborately crafted persona vying for clicks, and Pierce is only adding to the confusion. Is she a teacher? A pro-dom? Or just another manic influencer? Between Starbucks runs, hair flips, and HRH promotions, the 37-year-old YouTuber yells into her front-facing camera like a digital dominatrix on a mission to get cancelled, and that’s exactly what her followers want. Pierce posts things that would get any mainstream celebrity banned from social media, but the problematic influencer only seems to be gaining traction, and making bank. Never mind accusations of racism and appropriation, HRH’s students are submissives willing to forgive her indiscretions, so long as she posts another rant. Below, we tried uncover the method behind Pierce’s madness.

PIERCE: Recently, Venti cup, two shots espresso, one pump mocha, a couple splashes of milk, and some whipped cream. Can be hot or cold. It’s a deconstructed, skinnier mocha.

INTERVIEW: Describe your followers in one sentence.

PIERCE: Don’t really have a favorite. Basically anything that makes me laugh, so has to be pretty dirty and honest.

PIERCE: I don’t have time for that shit but if I did, probably Hunter Biden’s laptop. Damn.

PIERCE: I guess I’m really boring but I don’t have time to stalk. Like I’ve said previously, I’m successful and pretty because I do me. Plus, no one really interests me except for me.

PIERCE: I’m not sure what you mean by this, but things I would search in private browsing is… People’s net worth. How many times they’ve been married. Political views.

INTERVIEW: Do you read the comments?

PIERCE: I read the comments the day the video is posted and any super long ones are immediately deleted. How do you even have time to write paragraphs like that? It’s so pathetic.

INTERVIEW: How many rants a day do you have? PIERCE: Lots of reposts of meeee, Hilarious boomers in the wild, gays being extra, and relationship advice shit.

INTERVIEW: What’s one video of yours everyone should watch?

PIERCE: They should never miss a class and always be on time. There really isn’t just one. But I know people love the beachy waves one and the potato one.

PIERCE: INSTAGRAM and the back end of my site.

PIERCE: I’m so fucking happy that I haven’t made a mistake with sending an accidental email or text because I’m such a fucking airhead sometimes. I know I’m going to do that one day. Thank God INSTAGRAM has an unsend feature. Texting and email needs to have that too!

INTERVIEW: Where do you find the dumbest people online?

PIERCE: Twitter is a fucking cesspool of morons but it’s fun to fuck with them. I think TikTok used to be pretty bad but they are kind of easing into me and love me now for the most part lol.

INTERVIEW: Why do you hate merch?

PIERCE: Because everyone that’s ever done merch makes the ugliest shit I’ve ever seen. Like they aren’t funny and they put their stupid slogan on the front of the shirt that no one even cares about in the ugliest font with no vibe. I’ve never seen merch that I like. That’s why when I do shirts it’s not merch because I would never wear merch.

INTERVIEW: If you could film a rant anywhere in the world, where would it be?

PIERCE: Hotel Costes in Paris. I’ll do that eventually. That would be pretty iconic. They are such snobs there. They really need to take it down 12 notches.

PIERCE: People literally asking me to send them one of my designer bags because they can’t afford one and they are dead serious about wanting me to send it to them. INTERVIEW: What’s the secret to a good smoking selfie?

PIERCE: I’m not going to lie; I never do. You have to have a pretty face, preferably a good side profile and perfect nails, or just forget about it.

PIERCE: Off. I fucking hate correspondence. It literally gives me anxiety.

INTERVIEW: Who is the real Alexandra Peirce?

PIERCE: Self made and is not taking shit on the Internet anymore from people who are ugly and broke. The damn nerve of them.

PIERCE: SMD (only the real ones will know this).