It’s finally May, and that means gala season is in full swing. Chloë Sevigny, Cara Delevingne, and more turned out for the Tribeca Film Festival. Olivia Wilde and Maggie Gyllenhaal were among the celebs in attendance at a fundraiser for Pioneer Works in Red Hook. But no stars aroused as much fanfare as Elmo, Big Bird, and the whole gang on the Upper West Side. (They’re sticking around for Monday’s Met Gala.) Here, we’ve tracked the best of the best star sightings, outfits, and other famous-ish things, making news across New York City’s five boroughs during the week of April 27.

The stars were aplenty at the Chanel Tribeca Film Festival Artists Dinner, which drew Diane Kruger, Chloë Sevigny, Jemima Kirke, and more, in tweed and pearls to Balthazar. But the scene-stealers were arguably Cara Delevigne and Ashley Benson, everyone’s favorite as-yet-unconfirmed riot grrrl couple, who, according to Vogue, “beelined for the bar.” Stars: they’re just like us. Maggie Gyllenhaal getting down with Maxwell. Courtesy of BFA for Pioneer Works.

Maggie and Jake Gyllenhaal (a Star Map favorite) had a family reunion at Pioneer Works in Red Hook last weekend for the venue’s annual Village Fête. With a performance by Maxwell, a dinner by Danny Meyer, and a tarot reader, the 25,000 square foot space was filled with big names of the art world (Dustin Yellin, Mickalene Thomas), and the art world adjacent. The attire was “illusion and transparency,” though Maggie was not very good at hiding her love for Maxwell.

Interview fave Oyinda was among the attendees at Devotional Sound, a performance presented by Grace Wales-Bonner at St. Peter’s Church on Lexington Avenue last night. The line-up included Solange, new-age hero Laraaji, and jazz ensemble Standing on the Corner. Tickets sold out within minutes, proving that, yes, millennials still go to church.

What do you get when you put four funny guys at a dinner table? They presumably will be “laughing hysterically,” as did Jimmy Fallon, Chris Rock, David Spade, and Saturday Night Live‘s Lorne Michaels at L’Avenue at Saks, according to Page Six. What was so funny? We can only guess. America’s children have been wondering how to get to Sesame Street for 50 years. Finally, their questions have been answered, although not without controversy. On Wednesday, the city of New York unveiled an honorary Sesame Street sign on the corner of 63rd and Broadway on the Upper West Side, a skip and a hop from Lincoln Center. Though many have quickly pointed out that the quaint stoops of Sesame Street are a far cry from the bustle of Broadway, it didn’t detract from a celebratory rendition of “Sunny Days” by Cookie Monster, Ernie, and Count von Count. 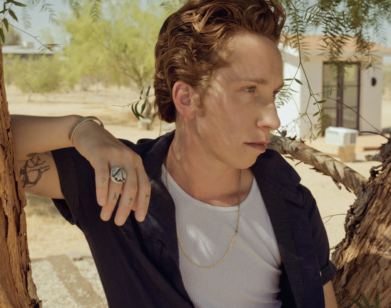