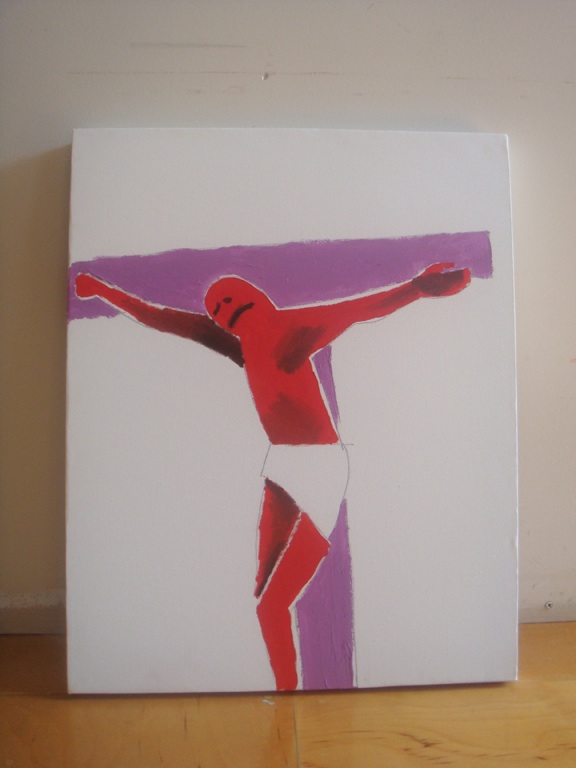 To anyone who knows anything about skateboarding Mark Gonzales needs no introduction. To those who don’t know, The Gonz is a legend, a fearless and anarchic exponent of a style of street skateboarding probably best described as insane. I first met Mark Gonzales in 2000, in Los Angeles through photographer Terry Richardson; on that auspicious occasion, he skated a handrail on steep stairs in his shoes without a board. I thought he was going to kill himself.

For a while thereafter, Gonzales sent me odd postcards to my address in London—postcards from all over the world, covered in drawings. He makes art all the time, and he has been making art in some form or another for almost as long as he has been skateboarding. But it’s rare to see an actual show of the work; that’s why we’ve put together one at the Half Gallery, “South West,” which opens tomorrow. Before installation, I ask Gonazales about the first artwork he remembers making. His answer was characteristically Gonz: “The first thing I did was a drawing on the back of a photo with a ballpoint pen. I was like 7 or 8 or 9 or 10 years old. My mum was really impressed with it.”

EMMA REEVES: Why is the show called South West?

MARK GONZALES: A lot of the artwork in the show is supposed to by like Southwestern-style rugs done on paper with watercolor and it’s kind of hard to get the lines straight. (LEFT: UNTITLED (BOWLER HAT), 2009)

ER: Some of the canvases feature the abstract Southwestern patterns and others are more representative of earlier work such as the characters driving the cars.

MG: You can’t just stick with one thing. You have to let your natural style come through, and paint what you naturally like to paint.

ER: Why are you so into Southwestern patterns?

MG: I just like them. I don’t know. I would like to make a rug. I don’t think they are that hard to make. I have seen them do it. They shoot one spool of string through this frame, then they close it and shoot another one across.

ER: Do you mean weaving?

MG: Yes! The rugs. How they make them. The Navajo rugs.

ER: What other works are in the show?

MG: Skateboards and a hat. I painted on a hat. It was pretty fun. Kind of like Magritte. He used to paint bowler hats. He also painted on bottles and stuff. He painted on curved surfaces. My girlfriend Heathermary bought me the hat and I painted on it. I didn’t really wear it until I painted it.

ER: Is this the first show you have done in a while?

MG: I was in a photography show called Topsy Turvy at the Janet Borden gallery. It was photos I made with my Sidekick.

ER: So you take photos, paint, make zines, write poetry, skateboard! You work in many mediums. What is your favorite? (LEFT: UNTITLED (HOTROD) 2009)

MG: I take it as it comes. I just made two super-8 films with my friend William Strobeck. One is a music video for Coconut Records, which is Jason Schwartzman’s band. You can see the video on the myspace page. And I did one for Pepe Bradock. He is normally an instrumental musician, but this time he took my voice and recorded it and put it to his music.

ER: Would you like to do more music videos?

MG: It’s hard to say. I like George Baselitz. I like his huge sculptures. I would like to work like that, and make massive sculptures. I already did make one in Holland, at an art institute called Het Domeine. It is still there in the garden. It’s on the web. You can see it.

ER: Do you have another show coming up?

MG: Yeah, uptown. It’s pretty strange. It is a correspondence that I had over a period of time with my friend Jocko Weyland. He wrote the book ‘The Answer is Never’, a historical account of himself and skateboarding from the early 80s to the 90s, or something like that.

ER: What do you mean by ‘correspondence’?

MG: Just like drawings, postcards and letters. He has saved them all. They look pretty good. That is what I think the show will be, with some new work as well.

ER: How do you keep all these different things going? Do you still skate?

MG: I just went to London to skate. But at the same time I am not very busy. I have a lot of time to smoke a cigar and sit around and do nothing and enjoy life-and wonder and ponder. I need time to think about how to conquer things. I am faced with the challenge of what I will do next and how will I do it.

ER: You also made a special limited edition zine for this show.

MG: That’s what I like doing the most. It is the most free thing to do. I can write anything and just put it in a zine, and then it’s out there. It is like blogging but on paper. It is what I started to do before the computers were all popular. I probably started to make zines in the early 90’s. The first zine I made was in Europe, in Amsterdam or in the Hague. It was pretty fun because photocopiers were thought of as something that you used for being serious. For this show I have made 50 in total but I have given away a lot already. I give away my artwork a lot.

ER: Who have you collaborated with on zines?

MG: Harmony Korine. Cameron Jamie. His are the funniest. When I collaborate with him we come up with some pretty funny stuff. I did one with Cameron Jamie and Kim Gordon for a show in Holland at the White Lady gallery or museum or whatever it’s called.

ER: It would be good to see all of your zines together.

MG: That would probably be impossible. There are so many of them.

ER: What did you put in the zine for this show?

MG: The zine I have made is poetry. I think that things are poetic when they don’t have a boundary. Without rules. My life is poetic. It is better to live in a world of poetic meaning rather than hardcore reality.

South West, curated by Emma Reeves, opens at the Half Gallery tomorrow, 6–8 PM. The gallery is located at 208 Forsyth Street, New York.