Caio Fonseca Comes Out of Isolation 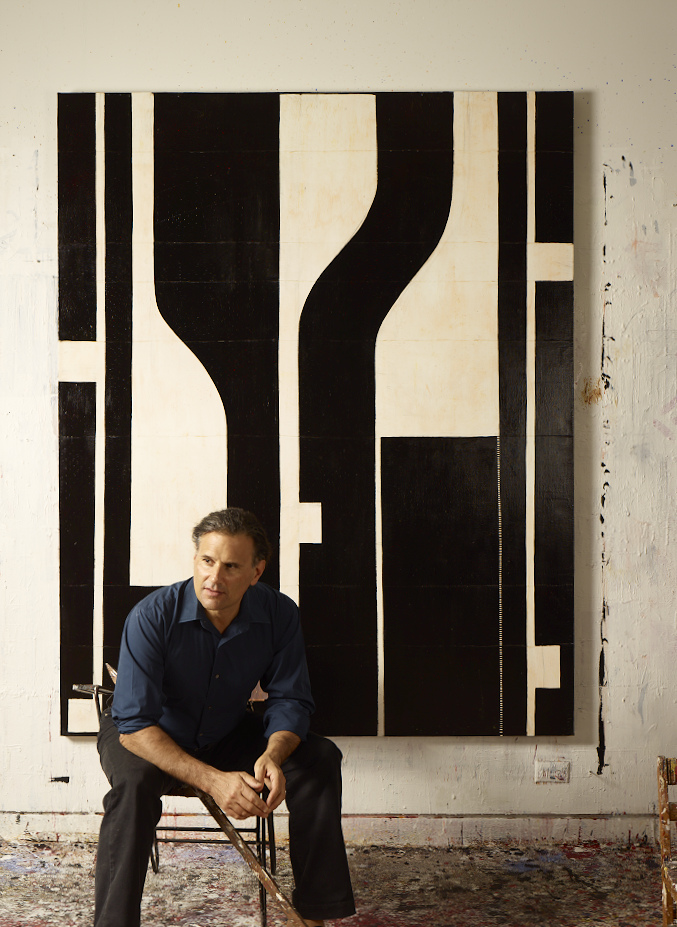 “It’s not until the very last phase that you know how good the works are going to be,” says Caio Fonseca. It is the eve of Fonseca’s Paul Kasmin exhibition, his first in New York in five years. “And I’m really happy with them,” says the 52-year-old Fonseca from his East Village loft-studio, where he lives and works half the year (the other half is spent in the Tuscan coastal town of Pietrasanta, where he can work in isolation).

The 25 or so new works on view at Kasmin [through April 28] mark a departure for Fonseca. His lyrical abstract paintings in which patches of color play across heavily worked surfaces have relied on the subtle tonal play of those hues—vivid oranges, reds, and yellows—are anchored on lush monochrome backgrounds. More than a year ago, Fonseca set out to reduce his paintings to their barest essentials, eliminating, among other things, a lot of the color as well as background, leaving the curving forms to “explain themselves,” he says. The paintings are for the most part black and white, but Fonseca has not abandoned color entirely. Some are a rich, deep blue or red, and the black-and-white canvases are splattered with tiny red dots of paint; visible only up close, the red flecks are a reward for time spent.

Also worth a look is a new documentary Painter: Caio Fonseca by filmmaker Michael Gregory that will screen in New York during the run of the Kasmin show (venue to be determined). Interview spoke with Fonseca about developing this new visual language and speaking it well.

MEGHAN DAILEY: This show is a big deal for you.

CAIO FONSECA: It is a big deal. This is a real leap, and a really different way of painting whether it looks that way or not.

DAILEY: In what sense?

FONSECA: For instance, there’s no background anymore, it’s all about painting one form next to another without any background, and even that slight shift is a notable change. It’s been about the nuances and how one little thing affects the whole canvas and the fact that one form actually creates the form next to it, which in turn creates the one next to it.

DAILEY: Was there a moment when you felt that shift to this new way of painting? Was it an accidental moment?

FONSECA: Yeah. It was last spring. I actually woke up one morning at 3 a.m. and painted the first one as if it was all resolved. I’d never had a moment like that before. I’d never taken such a leap.

DAILEY: So what happened?

FONSECA: I think what happened in the bigger picture was that over 25 years I had explored every corner of this tonal and floating world and there was still so much to do but I knew that I had to invent a different kind of language. I had a visit from an artist friend who basically said, “Your paintings are wonderful. Now stop.” It did resonate with me. It hit on the percolating need for change that was already there. I got a little push. I did a group of the paintings early on that were among the best. It was sort of beginner’s luck with these.

DAILEY: You think so, even after more than 25 years of painting?

FONSECA: Yes, because then I went to Italy for the summer, and I figured I would just keep going. But I actually ended up making every mistake that I needed to to learn this new language. I was experimenting. I was seeing how far this thing could expand. Then I underwent a whole process of slowly letting go of idiosyncrasies and habits and embellishments and everything extraneous to the essentials that I’m unwilling to let go of. I never dreamed that I would be making black-and-white paintings with so little embellishment. But it’s been liberating in many ways to let go of that and yet see what I did want to retain.

DAILEY: What could you not let go of?

FONSECA: One of the most important elements of Caio-ness I wanted to keep was that left to right reading, where one form draws you… this movement in what is otherwise a fairly still art, that sense of pulling the eye. It involves a sense of time. To me that’s esoteric and magical and playful, and if a painting doesn’t have that, to me it’s just canvas and paint. If it does have that, then it rises above its materials. [punctuates this by playing a few bars on the piano]

DAILEY: What music were you just playing?

FONSECA: That was improvisation. I’ve been studying composition with a composer for the past three years. Now that has been a revelation to me. I’ve been carrying around musical textbooks for a decade but I hadn’t ever gotten into them. I’ve been playing piano my whole life but I’d never tried to understand how compositions are made really. Try to imagine if you’d loved paintings your whole life but had never painted one. My aspiration now is just to understand. I don’t have professional pretensions. I’ve learned so much. So many things I’ve been doing in the visual, two-dimensional painting world parallel many of the inner working of music—how intervals resolve into each other, harmonic rhythm, tonal things—there’s a whole vocabulary that overlaps. Sometimes people see pianos in my works—that I never think.

DAILEY: To me they are never literal.

FONSECA: People see so many things in the paintings. Although I never think of them, it charms me a little bit that people actually project actual scenarios on to the paintings. Hopefully that means that they have a little bit of life to them. Figuring out the rhythm, the structural element has been the key thing in this work, more than the color element. It really was the variety of different widths that lead to a certain movement, a rhythm. Otherwise I’d fall into anything that was too stripy or almost like bar codes, and it thwarted the natural flow of the painting.

DAILEY: You say bar codes, which is kind of funny because I hadn’t thought that, but you can see how the association might happen, as such associations do with abstract painting. Obviously they are not based on those. But are they entirely abstract?

FONSECA: My forms are not abstractions of things in the real world. They’re also not symbols. I would say that my job is to invent these forms and to put them together in a way that keeps your interest, to give the forms a quirky identity so you can engage with them, so you realize there’s an inner intelligence or logic. If you stop asking what they mean, or what they remind you of, and just look at them for 29 seconds, you find that they want to explain themselves and show you how much every tiniest detail is related to the whole.

DAILEY: So it’s about the forms but this is not formalist painting?

FONSECA: It is about the forms and I think it gives you a chance to see the forms almost in the act of being created; you see them being made by the adjacent forms. Is it a procession of black forms or white forms? It’s two paintings simultaneously. It makes you see form in itself, in the same way that if I play a Bach piece, [plays 10 seconds of Bach’s Prelude in D Major on the piano] you could say “I like that,” or “I don’t like that,” but you wouldn’t ask, “What does it mean?” Everyone accepts the abstraction of Bach. My work aspires to the same kind of abstraction, which is so engaging that you’re distracted from asking about what it means.  So many paintings have hidden meanings or need wall texts, but my work is not in that category. Once it’s in the viewer’s eyes my job will be judged on whether or not it is engaging and pulls you in to a kind of intelligence or poetic something going on there that makes it sustainable to look at.

DAILEY: So it’s really about painting. I know I’m being terribly reductive.

FONSECA: Well, it is about painting. Even though that’s a hackneyed phrase, it excludes what they are not about. These are not about gender or politics or  “neo” or “post.”

DAILEY: Your work never has been about any of that.

FONSECA: No. I’ve avoided that I think because I spent so many of my formative years alone in rooms in foreign countries. I was never exposed to art school. I grew up in an artist’s studio. I was exposed a lot of studio time between of my father [modernist sculptor Gonzalo Fonseca] and a great painter I studied with in Barcelona. That was my art school, as Europe was.

DAILEY: You were coming at it from a different, and in some ways more advantageous place.

FONSECA: In one way it was a great. I didn’t have the burden of false originality before I was equipped on a substantial level to deal with that. And I’m grateful. For me becoming a painter was an Everest, in terms of what I thought a painter was. There are many roads to becoming an artist. For me it wasn’t art school. I didn’t have that go to art school and then get a gallery. It’s more like, how deep is your inner library to cull from. It’s certainly not about technical prowess, just about depth of investigation. It takes time. I had 15 years of painting under my belt before my first New York show. I was glad to have that. It’s a good thing to spend your twenties getting your craft.

DAILEY: When was your first show?

FONSECA: I had a few in Europe, then in New York, in 1993. That was at Charles Cowles gallery. From that first show the Metropolitan Museum of Art bought two paintings. I had 15 years of painting in a room preceding that. It wasn’t really overnight success, but it seemed that way from the outside.

DAILEY: This is your first show in five years in New York. How do you think it will be perceived from the outside?

FONSECA: Well first I thought I’d probably lose my entire audience, because if you liked my old work, this is pretty different. But the response from the not very many people who have seen them has been really good. The main person who is very enthusiastic is Paul [Kasmin]. He’s been really behind this work.

DAILEY: And are you ready to send them out into the world?

FONSECA: This morning I got up early and I was glazing the paintings and they just looked so beautiful. I had a private moment of “yeah, I’m behind this.” Which is all that matters as an artist, to believe in what you’re doing. It sounds like an obvious thing but it takes a lot of work.