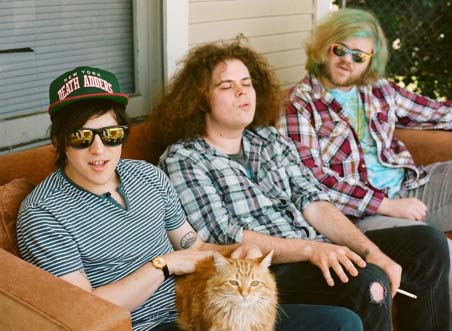 What a strange year-and-a-half-long trip it’s been for Wavves’ Nathan Williams since we first spoke to him. Since April 2009 he’s released two albums,  recording another, and traveled to South By Southwest. He’s braved backlash, not to mention a drug-fueled Barcelona “meltdown” (resulting in a split with then-drummer Ryan Ulsh) and a Brooklyn bar brawl with a member of the Black Lips. Subsequently, he’s added a new drummer, Zach Hill, and late Jay Reatard bassist Stephen Pope and drummer Billy Hayes).

That brings us to now, and the release of King of the Beach, the third Wavves album, which is  something of a revelation for those who thought Williams only capable of willfully buried lo-fi ironic stoner pop. The guy has always written great hooks and melodies, and now you can actually hear them. The record has sentiment, self-doubt, surprisingly sunny bits, and no shortage of the brattiness that makes Wavves, Wavves. I sat down with the band in Brooklyn:

JOHN NORRIS: I saw you guys the other night as part of this year’s Northside Festival. And it’s interesting because last year at Northside, you were what a lot of people were talking about, because it was only days after your infamous Barcelona show. Is it safe to say you’re happier this year?

NATHAN WILLIAMS: Yeah, I mean I was happy a year ago, too. It was a situation with a little too much, too soon maybe. I mean, when there’s an on-hand drug dealer… There’s a guy at the hotel, a guy next to the stage hand who says, “What drugs do you want?” I was 22. And I’m 24 now so, yeah, I take drugs sometimes.

STEPHEN POPE: And you blew it!

WILLIAMS: So I ruined my career!

NORRIS: Well you didn’t, thankfully, but in the aftermath when people were piling on about that and for other reasons, did you ever ask yourself,  “Do I even want to do this anymore?”  Or it was never that deep?

WILLIAMS: Nah. I mean, I think since it all happened so fast, there were obviously gonna be people who didn’t like what I was doing, for whatever reasons.

WILLIAMS: At first it’s a little weird to hear people who don’t fuckin’ know you, talking about you. It doesn’t make any sense. But, with tougher skin and a little more maturit it comes with the territory.

NORRIS: One nice thing about Barcelona is it was where you met your current bandmates, these guys. But before you played with them, you were playing from July through September with drummer Zach Hill, and you guys even made a record together. What ever became of that album?

WILLIAMS: Those songs, they’ll be around. I probably have 70 or 80 songs recorded, demo-wise, on my computer, including the stuff that I did with Zach. At this point it’s about finding how they fit into which equation and when is best to have them heard by people. But after I did the Zach record I thought about it, and I didn’t want it to be my third record. It wasn’t right for my third record.

NORRIS: Stephen and Billy, you guys were in a period of change too. It was early October when you left Jay Reatard, as people may remember when Jay tweeted, “Band quit. Fuck them.” Were you in touch with him at all between then and when he died in January?

POPE: I had hung out with him a couple times and I saw him a few weeks before he died.  We were still in touch, but a month after we quit, we went on a six-week tour with Nathan, and then Jay died like a month later.

WILLIAMS: He died three days into us making our record.

HAYES: I never talked to Jay after we quit. We loaded our shit out of his house, and we called him that night and quit. And it was the best moment of my life. It was like being freed. It was like Moses, man.

POPE:  It’s kind of like a relationship, you know? You like it for a while, and then you let it go on a little bit too long.

HAYES: I liked it for like a few weeks and then I don’t really know why I stayed in it for so long, because as soon as I quit Jay sent me a bunch of text messages that were just like, “you’re fat, you’re ugly, you’re stupid, and I should’ve fired you years ago.” I think Jay really hated me the whole time, which is really weird but he would never really express it. I just figured, “well I guess this is just part of the job, this is just how this shit goes. It has to suck, whoever you’re gonna get hooked up with has to be a psycho.” And now, it’s just so much fun.

POPE: It was hard because Jay and I were friends before, and we kind of remained friends afterwards, but working together…

HAYES: If you feel like I’m being a dick for saying negative things about him, you didn’t know the guy. If you had met him and you thought that he liked you, probably not. Probably the second you walked away, he called you one of the worst names you can imagine.

NORRIS: I did meet him once, and I kind of got that feeling about him, but some people are like that.

WILLIAMS: Those kind of people suck.

NORRIS: So Nathan, you said you didn’t want the Zach record to be your third album, then you got the chance to go work in a proper studio—Sweet Tea in Oxford, Mississippi—to work with a veteran producer, Dennis Herring. Was that the big change that helped move you in a cleaner new direction?

WILLIAMS: Yeah, because for as long as I’ve been making music I’ve only known one way to go about recording. And to have the opportunity to record in a million-dollar studio? I mean I can always go back to my parents’ garage and do another Wavves record.

NORRIS: Because as you know in early ’09 I think people, if you said “Wavves” they’d go “‘Oh, that’s that lo-fi band.” Did you ever feel like “well that’s what I have to sound like”?

WILLIAMS: People always try and pigeonhole you, but a big thing going into King of the Beach was recording it how I wanted to do it. Nobody could tell me how I could have my songs sound.

NORRIS: Did you find that the way that you worked had to change? I’m sure you were used to a seat-of-the-pants approach.

WILLIAMS: It was a lot different. Honestly, it was extremely helpful in terms of songwriting. A lot of recording when you’re in a studio like that is just learning to be patient. You have to play the same part over 70 times without moving. They pushed us a lot further than we would have ever pushed ourselves. And that’s why people go in the studio with that guy and they’re like, “This guy’s a fucking asshole, Napoleon bitch.” Yes, kind of. But he’s also a genius and in the end he makes you better.

NORRIS: So did you butt heads with him?

WILLIAMS: Sometimes. I definitely did. But at the end you see your product and it’s clear he has been doing this a lot longer than I have.

NORRIS: There are some songs on this record that are just unabashedly sweet and not ironic in the least—”Convertible Balloon” and “Baby Say Goodbye.”

NORRIS: I think that’s gonna surprise some people. Maybe I wrongly associate irony as being an inherent part of Wavves.

WILLIAMS: Again, I would hope that people can’t anticipate what I am going to do. That’s part of the fun, isn’t it? To listen to a record and find out that it doesn’t sound like what you’d expect.

NORRIS: Equally unexpected might be other tracks like “Baseball Cards” or “Mickey Mouse” which in a more psych vein are getting Animal Collective comparisons, and  here’s “Post-Acid” which people hear and say—

NORRIS: I was going to say Weezer. But, sure, Blink too.

WILLIAMS: I love those bands ‘til the day I die.

HAYES: It’s not embarrassing. We grew up with Nirvana, Green Day and Weezer, and we will always want to being a little bit of that back. It was a really fun time when the nerds took over music and fat geeks and pimply weirdos were on TV.

POPE: I still had a Weezer sticker on my car until like two years ago because it died.

NORRIS: You’re heading to Europe soon, back here for Lollapalooza in August. Has the touring experience changed in the past year–is it any better now?

WILLIAMS: It’s a lot easier. I think it’s easier touring with each other. This is more comfortable. These guys are more, I dunno… They’re cute! One looks like Taylor Lautner and one looks like Chris Elliot and I like Twilight.

NORRIS: I’m happy for you man, I wasn’t sure last year if you were gonna make another record, but I never thought you were just a punk who wanted to piss people off.

Video of John Norris’s interview with Wavves can be found at Noisevox.org.