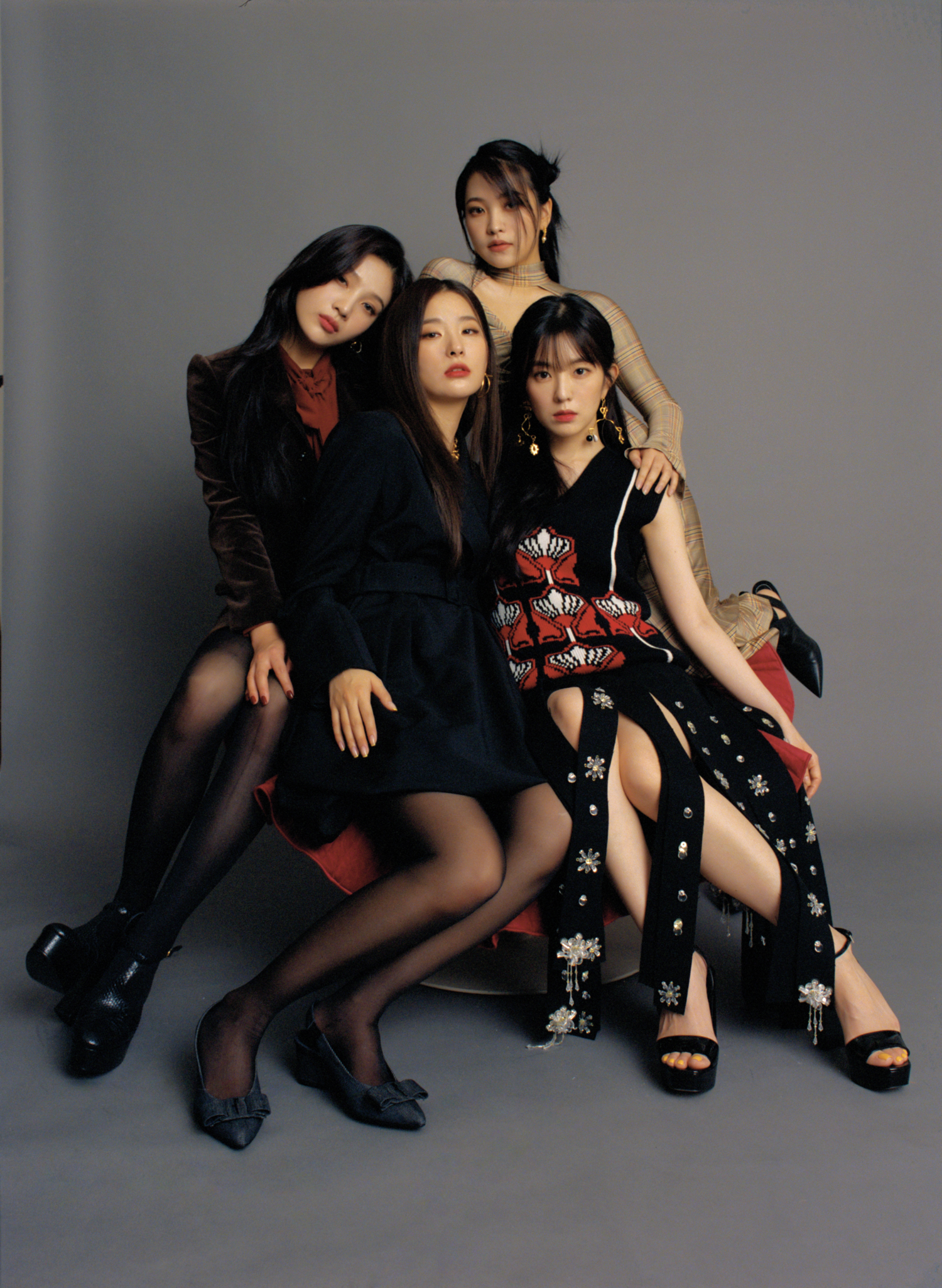 Red Velvet, an all-female Korean supergroup comprising five young pop stars—Irene (Bae Joohyun), Seulgi (Kang Seulgi), Wendy (Shon Seungwan), Joy (Park Sooyoung), and Yeri (Kim Yerim)—was created in 2014 by SM Entertainment, a company that has helped develop and popularize the global K-pop phenomenon. In their still-nascent career, they have released countless songs with frothy titles such as “Power Up,” “Dumb Dumb,” and “Umpah Umpah”—all packaged into two studio albums, one reissue album, one compilation album, and 11 EPs. As they continue their worldwide expansion, following in the footlights of BTS and Blackpink, they have played sold-out American shows, secured endorsement deals with everyone from Coca-Cola to Prada, broken streaming records for their contribution to the 2020 animated film Trolls World Tour, and added Korean lyrics to a remix of the song “Close to Me,” by Ellie Goulding and Diplo. There’s a duality to their identity that they’ll explain later, which is why we could think of no one better to ask them a few questions than Diplo, a dance-hall legend with a penchant for country.

DIPLO: Tell me about your name. Why are you called Red Velvet?

RED VELVET: Red Velvet is a combination of “red,” representing our bold, more sophisticated side, and “velvet,” which reflects our softer, more feminine side. The name encapsulates our signature color and describes who we are as artists, and what we want to accomplish: to captivate the world with great music and performances of different genres and styles.

DIPLO: What separates you from your K-Pop peers? In what ways are you trying to distinguish yourselves?

RED VELVET: As embodied by our group name, we have our own unique color that can be seen in everything that we do: “red” for the vivid and bold, and “velvet” for more of our soft, toned-down side. This is what makes us different from other artists.

DIPLO: What are some of the things you love about America?

RED VELVET: We love that we can experience and easily access a wide variety of different cultures.

DIPLO: When you’re traveling, what do you miss most about home?

RED VELVET: When we’re abroad for work, we’re constantly on the move—to new hotels, new cities, and new environments. It can get pretty lonely sometimes, especially when we’re alone in our hotel rooms at night. That’s when we miss being together with our families and our pets.

DIPLO: What is your go-to room service order?

DIPLO: What’s it like for you walking down the street in South Korea?

RED VELVET: We usually cover our faces with a hat and a mask so there is no problem walking down the streets here. If we act natural, we blend right in.

DIPLO: How have your lives changed since starting the band in 2014?

RED VELVET: We feel like the change hasn’t been too dramatic, but seeing fans support us from all around the world makes us emotional every time. It never ceases to amaze us that we get this support and love, and we are so incredibly grateful for all of it. Our fans inspire us to work harder every day and to spread more positive energy.

DIPLO: What’s the craziest thing a fan has ever done or given you?

RED VELVET: At our very first event, shortly after our debut, we didn’t yet have an official light stick, so our fans were cheering us on with these dusters—that you use to clean—because they were the same color as our hair back then. That was a pretty memorable sight.

DIPLO: What would each of you be doing if you weren’t in the entertainment business?

RED VELVET: This is easy for Joy. She loves children and dogs, so she’d probably be working to become a certified dog trainer or teaching kindergarten.

DIPLO: Where would you like to see yourselves as a band in ten years?

RED VELVET: Enjoying life to the fullest, always smiling, and doing what makes us happy.

DIPLO: Besides me, which American artist would you most like to collaborate with? Editor’s Note: The band’s fifth member, Wendy (not pictured), is still recovering from the trauma of a serious stage accident that occurred in December 2019. Chung Ha on Querencia, Comfy Sneakers, and Her Ideal Dinner Diplo Wants You to be a Space Cowboy