Joshua Bassett Shares His Philosophy on Love: “You Will Find It” Jacket and Jeans by MSGM. Top by COS. Sunglasses by Oliver Peoples.

As a singer, songwriter, and actor, Joshua Bassett struck gold when he was cast on the Disney+ series High School Musical: The Musical: The Series, where he gets the opportunity to do all three. As the show’s main protagonist Ricky Bowen, Bassett gets to show off the music skills he’s been sharpening since he was a child in Oceanside, California, where his early love of musical theater was first sparked. Last week Bassett released his self-titled debut EP, which features “Lie Lie Lie,” a song that’s been the subject of much speculation online. But we’re not going to get into that here. Instead, get to know the multi-talented 20-year-old performer as he answers some questions from the writings of Andy Warhol.

JOSHUA BASSETT: Avocado toast and scrambled eggs, as per usual!

BASSETT: My first “real” job was at a frozen yogurt shop, but I was making bank as a local videographer when I was 12.

BASSETT: This gem of a human, Brandi, who was my boss when I was a Legoland performer, was super understanding and encouraging when I decided to quit and move to L.A. to really give the acting and music thing a go.

BASSETT: Dead Poet’s Society or Good Will Hunting. Really, anything with Robin Williams that makes me cry. Sweater by Marcelo Burlon County of Milan. Pants by COS. Sneakers by Lanvin.

BASSETT: Considering I take a cold shower every single morning, I’d have to say baths. I can meditate for hours in the bath, Plus, bath bombs!

BASSETT: Well, you have to first be a cook to be a good cook. I can make a cheeseburger, eggs, and bacon. Although I made chicken once. (Note: my mom helped with the chicken.)

BASSETT: Too many to count. Not spending as much time with my family growing up, not going to therapy at an earlier age, and not taking more emotional and mental risks when I was younger, to name a few. Jumpsuit by Amiri. Turtleneck by COS. Shoes by Christian Louboutin.

BASSETT: When I feel unprepared. Nerves are funny, though. The nerves you get out of fear that something will go wrong often make the likelihood of it going wrong even higher, so I do my best to remember that while I acknowledge and appreciate the nerves, they are not necessary and then I let them go. Or try to.

BASSETT: A passion and appreciation for life. You don’t have to be chipper or falsely optimistic, but someone who seeks adventure, love, and life itself.

BASSETT: Love is everything and everywhere, whether we consciously see it or not. If you seek love in everything you see say or do, I promise you, you will find it.

BASSETT: Why can’t it just be magic all the time?

JOSHUA: Ha! It is! The mistake is believing that seemingly “bad” things aren’t magic. All of life is magic. Falling in love is, as well as the heartbreak. The pain you face, as well as the greater life experience and peace you find. The second you categorize your life situation as “good” or “bad” you no longer see the magic. Once you embrace that life isn’t happening to you, but for you, you will see the magic in all things.

BASSETT: How many hotels have you been kicked out of?

JOSHUA: Surprisingly none. I tend to try to find a way onto the roof at every hotel I stay at. Jacket, Pants, and Shoes by Ermenegildo Zegna. Rings (worn throughout) Joshua’s Own.

BASSETT: At this point, nothing. I ought to set up a P.O. box.

BASSETT: I just started This Thing Called You by Earnest Holmes. But I’m always re-reading The Untethered Soul by Michael Singer.

BASSETT: My dream role is currently a reality role. The fact that I get to act, write music, and sing for the same project is spectacular. I would love to do an indie-type film and push the boundaries of what I think possible for myself. Drama, comedy, whatever may come.

BASSETT: Anything that excites me. I’ve also been writing a lot, and creating the roles I would want to play because why wait on someone else?

BASSETT: Read, write, and go on TikTok too much. 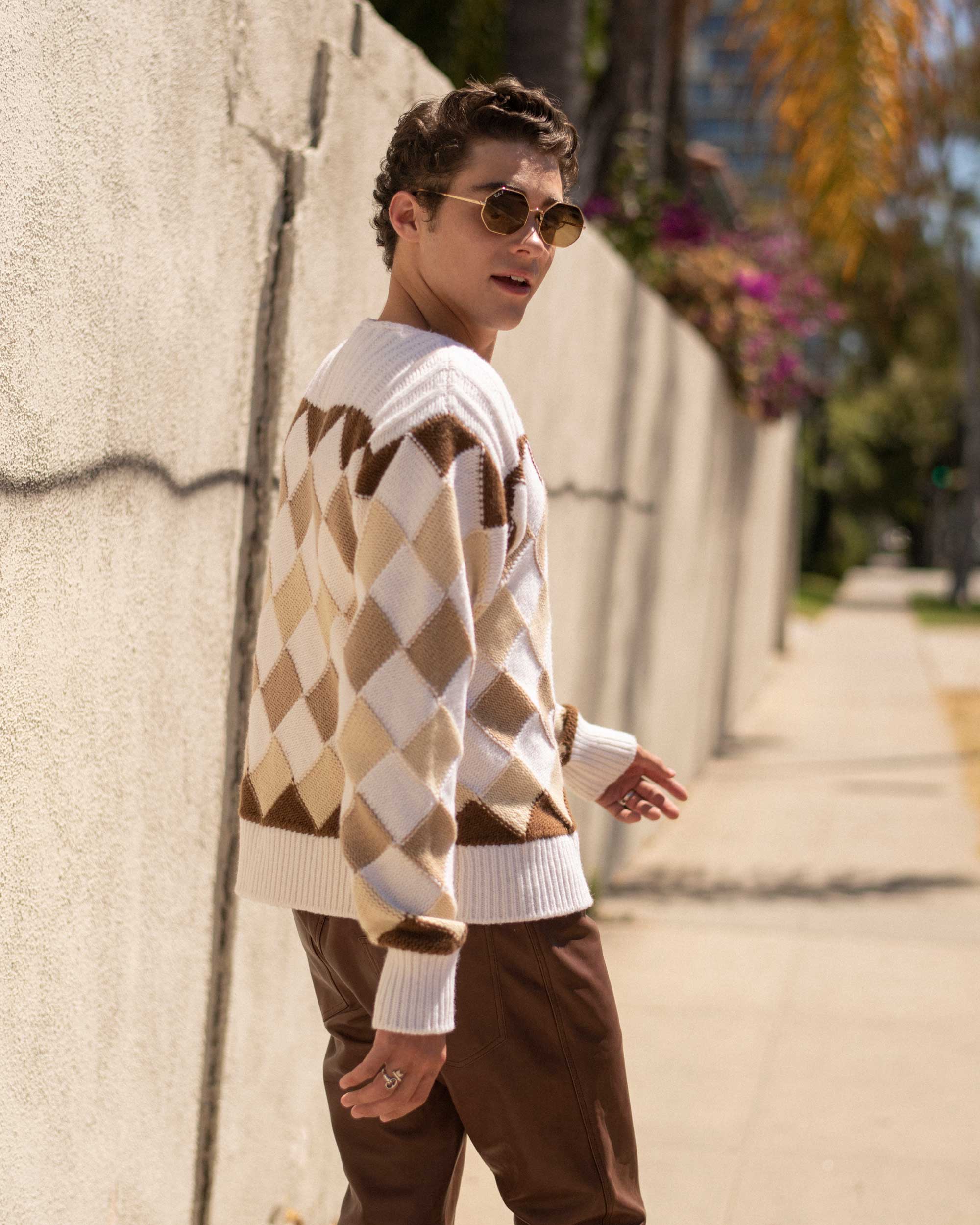 Sweater and Pants by Salvatore Ferragamo.