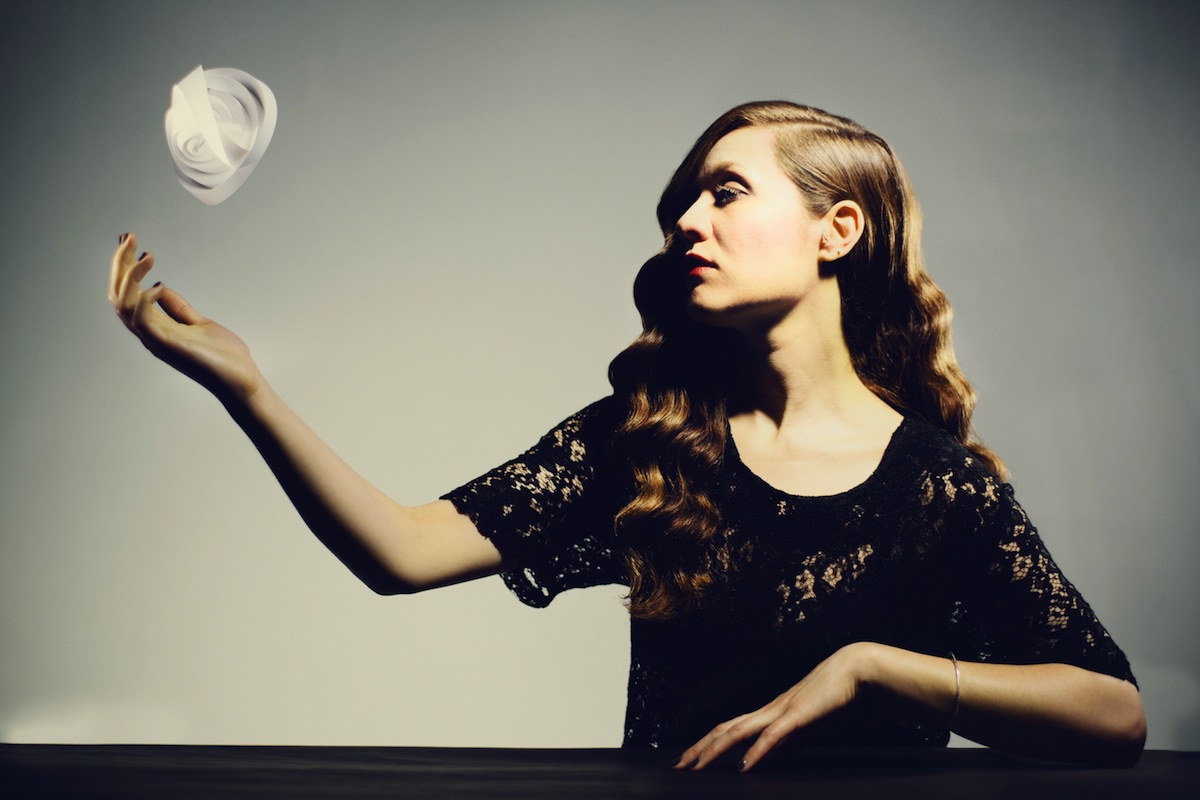 “If you cheat, don’t you lie / ‘Cause, baby, I don’t give a fuck what you do. / If you want my love, if you want my love, / Baby, pull my hair back.” She may be a mild-mannered piano teacher from Hamilton, Ontario, but Jessy Lanza knows what she wants. Rare is it to find a young artist with such assured confidence both in the sheets and in the studio, and it is this confidence that so effectively guides Pull My Hair Back, Lanza’s debut LP.

Pull My Hair Back was co-written and co-produced with Jeremy Greenspan of Junior Boys and released on the UK’s Hyperdub last September. For a record that is so obviously weaved with throwback threads of funk and soul, Pull My Hair Back is fresh, exciting, and eclectic. The title track, quoted above, is the most overtly sexual refrain, but much of Lanza’s nine-track LP finds strength in its subtleties. Her confidence is most readily apparent in her willingness to be transcended by the layered pulses of her and Greenspan’s electro melodies.

Fresh off a European tour to promote the LP, Lanza makes her U.S. debut this Friday, January 17 at Brooklyn’s Glasslands Gallery and again on Saturday, January 18 at Manhattan’s Mercury Lounge. On a Skype call from her Hamilton home earlier this week, Lanza opted to speak without webcam; she seems an uneasy subject. Much like Lanza the musician, Lanza the interviewee leaves one wanting more. We spoke with her about Pull My Hair Back‘s influences, Hamilton’s isolating nature, and her role as a card-carrying member of R&B’s electronic evolution.

BENJAMIN LINDSAY: Now, correct me if I’m wrong, but did I read somewhere that you are a music teacher?

JESSY LANZA: Well, yeah, I teach piano privately. I haven’t really been able to do it as of November. Once I started touring, it was hard to do it.

LANZA: Yeah, kids need consistency in their lives, you know? I didn’t want to be “the absent piano teacher.”

LINDSAY: Being a young white woman from Hamilton, Ontario, how did the city influence your approach to R&B?

LANZA: When I was in middle school, I guess that’s when Timbaland and Missy Elliott became really big. So that was just the music that everybody was listening to; that was pop music. Hamilton was a particularly bleak place to live in the ’90s and 2000s. I think it’s gotten better in recent years, but there wasn’t a whole lot going on here for a kid. Hamilton used to be a pretty thriving city in terms of there being a real downtown and people had businesses and whatnot, but when the steel industries closed down, things really went downhill. And they built a big mall downtown, which sucked all the life out of the other stores. There just wasn’t anything going on; there was nowhere to go. I mean, granted, there was a pretty big rave and dance music scene here, but that was nothing I could be involved in, ’cause I was a kid.

LINDSAY: Jeremy Greenspan of Junior Boys was sort of your partner in crime for this LP. Did you know each other from living in Hamilton?

LANZA: The other guy in Junior Boys, Matt Didemus, his little sister was my best friend growing up. I’ve known him since I was a kid. Hamilton’s a pretty small place, so when I moved back here, [Greenspan and I] just started hanging out.

LANZA: Jeremy is really good at finishing stuff. If I’ve ever had an idea that wasn’t going anywhere, I could always just be, like, “Can you do something with this?” He’s quite good at breathing new life into things that I thought would never get finished. The thing that I like about working with Jeremy is that it’s always fun and he doesn’t take things too seriously, which is a nice approach to have when you’re doing music. I think it can turn out really bad if you start to take it too seriously.

LINDSAY: How did your relationship with the UK’s Hyperdub get started?

LANZA: That’s a Jeremy connection. Steve Goodman, who runs the label, is an old friend of Jeremy’s sister, actually. We saw each other when Jeremy was DJing last year sometime, and Steve just asked him what he was working on, so he played Steve a couple tracks that we were doing, and Steve liked it.

LINDSAY: I love the music video for “Kathy Lee” [above]. You give listeners a nice glimpse at Hamilton, and “Jed the Dancing Guy” is a bit of whimsy you throw in there. Was there any particular message you were going for with your lead single?

LANZA: It was more just what I felt like doing. I wanted to a do a video that had Hamilton as a backdrop, and Jed is just this guy that you see around Hamilton all the time.

LANZA: Yeah, he’s probably out there right now just dancing around. He literally is “the dancing guy.”

LANZA: Yeah, it’s pretty weird. I mean, you like watching him. He’s got some swagger. I didn’t want to be in the video, really, so, yeah, Jed’s a cool guy.

LANZA: Usually I’ll start with the drums and I’ll have a beat that I like and then write some chords over it and have a skeleton of a song. Then I’ll show it to Jeremy and see if he can flesh out anything, and then he’ll do some work on it and then pass it back to me, and then we just kind of do that until it’s ready to be mixed.

LINDSAY: You said in a previous interview that lyricism that’s logical isn’t as important to you as lyricism that sounds good. Could you expand upon that?

LANZA: I don’t really consider myself a lyricist just because it gives me so much anxiety writing. I hate the sound of overthought, labored lyrics. So the way that lyrics get recorded is just that I go to my studio and I record a bunch of stuff, and then I kind of Frankenstein it together later. Sometimes the lyrics don’t make all that much sense, but it works for me. I’m definitely more comfortable doing the production things. I have more fun doing that rather than being, like, a “singer.”

LINDSAY: Pull My Hair Back isn’t an obvious LP in many ways, but you’re definitely treading themes of love, sex, and longing.

LINDSAY: Yeah! What factors in your personal life influences your music?

LANZA: The feeling that I often get from living [in Hamilton] is feeling kind of cut-off or isolated, so that’s something that somehow comes into the songwriting. I don’t have any friends that live here. I made new friends living here, but all my close friends live in Montreal or Toronto—nobody lives here anymore.

LINDSAY: Do you ever plan on leaving Hamilton?

LANZA: I like Hamilton; I like living here; I like working here. I don’t plan on leaving in the near future unless something really great presents itself.

LINDSAY: You’re a studied classical pianist and you received your undergraduate degree in jazz performance. Do you think a fluency in those foundational music styles is necessary for musicians?

LANZA: No, definitely no. You’re probably better off not. If you have all that knowledge, you want to fall back on it and use it, and I think that can be a pathway to making some pretty terrible music.

LINDSAY: One slight criticism your album has received is the fact that you’re not in the spotlight. A lot of the time, your voice will play a supporting role, almost losing itself in an orchestra of synthesizers. What do you say of such criticisms?

LANZA: I think some people like something that’s more explicit in its presentation; they like an emotive voice or something that’s really easy to grab onto, especially in R&B [as a] female singer. I’m just not really comfortable in that role. I don’t like things that are so obvious. When [Jeremy and I] were making this record, we wanted something that was a bit more subtle. Some people don’t like subtlety, or at least the way we presented it, but that’s okay.

LINDSAY: You’re categorized as an electronic R&B artist, and you’re not alone. I feel it’s a trend of sorts for R&B to fuse itself to notes of EDM and pop—just look at artists like the UK’s Jessie Ware and even the latest from Beyoncé. Do you think R&B is universally evolving, or is this a whole new genre that’s taking form?

LANZA: I think it’s evolving where people don’t want to fall into really strict genres. People are into just blending things all across the board.

LINDSAY: Is that what you’re looking to do?

LANZA: It’s not like a, “I’m-gonna-do-this-thing,” it’s just taking all the music that I like and being influenced by it. It’s not a purposeful thing. I just really wanted to make an R&B record, and then it came out sounding this way.

LINDSAY: Being an artist on the rise, there are, of course, going to be comparisons to those who came before you. The New York Times, for instance, recently drew comparison to Aaliyah. Are there any artists in particular that you feel Pull My Hair Back pays homage to?

PULL MY HAIR BACK IS OUT NOW VIA HYPERDUB. CATCH JESSY LANZA THIS FRIDAY, JAN. 17 AT GLASSLANDS GALLERY AND SATURDAY, JAN. 18 AT MERCURY LOUNGE. FOR MORE ON THE ARTIST, VISIT HER FACEBOOK PAGE.