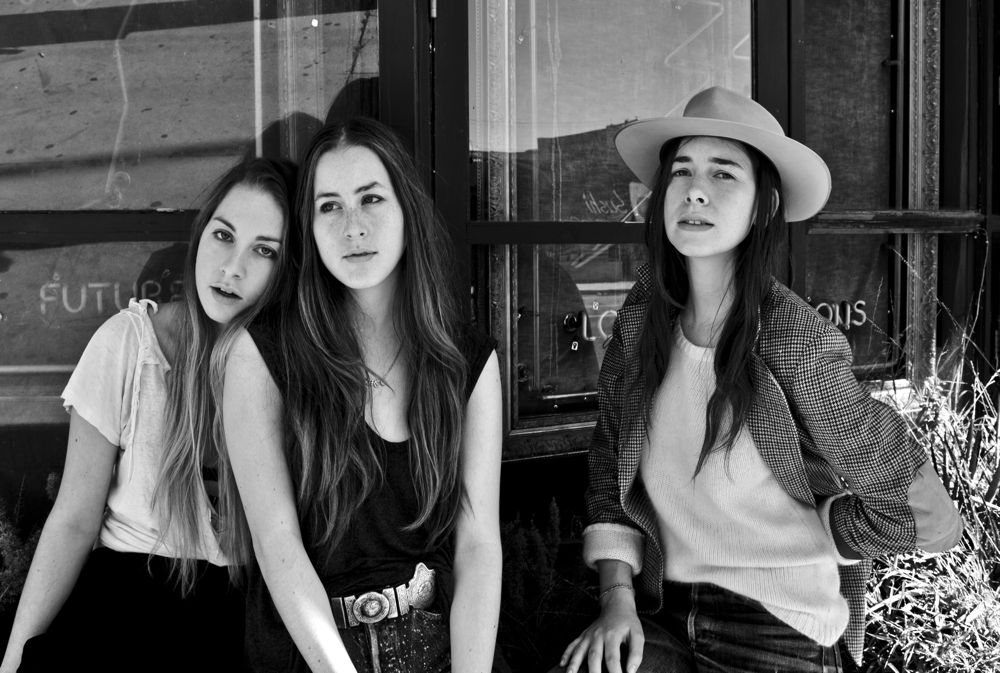 ABOVE: (FROM LEFT TO RIGHT) ESTE, ALANA AND DANIELLE HAIM

Our discovery of the week is California pop-band HAIM. Composed of sisters Danielle, Alana, and Este, and drummer Tim, HAIM is definitely worth a listen if only because they seem to be the kind of band that legendary musicians and producers ask to work with. Indeed, despite only being in their early 20s (and late teens), the Haim sisters have already worked with Blondie producer, Mike Chapman, and middle sister Danielle has toured with Jenny Lewis and Julian Casablancas. A pretty stellar endorsement if you ask us! We caught Danielle on the phone to chat about HAIM’s origins as a family band (move over, Von Trapps), how she survives being surrounded by her sisters, and what HAIM hopes to achieve over the next year.

BAND NAME: People often mispronounce it; we always say it rhymes with “time.”

COREY HAIM: [laughs] I don’t think I was alive for the whole Corey Haim/Corey Feldman thing. I was talking to Este, my older sister, and she said that she preferred Corey Feldman.

FIRST CD: I think the first CD I bought was Ace of a Base, from the early ‘90s. It’s not that bad—the most embarrassing thing on my MP3 player is probably an old HAIM demo. People are always like, “Oh, what is this? Is this new” and we’re like “Don’t listen to that! It’s an old garage band thing that I don’t want anyone to hear.” [laughs]

FAVORITE SONG:  A song I wish I’d written is “This Woman’s Work” by Kate Bush.

ON EARLY STARTS: I started [playing the guitar] when I was around seven; my mom played acoustic guitar so she taught me a bunch of Beatles and Joni Mitchell songs. It was always her dream to be the next Joni Mitchell. I don’t know what happened, but she didn’t end up doing that for a living, so I think she always secretly wanted us to pursue music because she couldn’t. [When I was little] we had a family band with our mom and dad. [My parents] had a band with another couple called Boomerang. When that fell apart, my dad didn’t want to deal with anybody else—I think they kind of had a bad falling out—so he decided “Why don’t we just start a band with the kids!” So we started playing around town for charity, for the children’s hospital, at local street fairs, just playing old pop and rock music.

ON PLAYING MUSIC WITH YOUR PARENTS…:  [laughs] I think I always though it was kind of cool [to play music with my parents]. Sometimes I would get embarrassed about song choices; when we were younger my parents would pick what songs we would cover and we would do Santanta. Now [that we have our own band] we don’t do those songs.

…AND PARTYING WITH YOUR SISTERS: It’s kind of weird how close we are I think, people get weirded out by it. We do bicker-when you’re sisters, you always bicker-but it’s usually a quick thing, we get over it really fast. Alana is five years younger than Este; she’d started going out with us when she was 16, but it was definitely weird, especially now when Este’s friends will hit on Alana. Alana carries herself well; she’s still the baby but she’s really mature.

JULIAN CASABLANCAS AND JENNY LEWIS: Jenny [Lewis] is rad. I got approached by one of her friends who was opening for her to play drums-his drummer got sick a week before he was going on tour and he randomly asked me [to come on tour as his drummer]. I learned the songs in a couple of days and my parents were not excited about it, but I said “I’m going on this tour, and you can’t do anything about it.” [laughs] When Jenny was doing her next tour she contacted me [to play guitar] and Julian Casablancas came to one of the shows. He was recording his record at that point, so he was trying to get a band together for touring, and after seeing me he asked if I would play guitar and percussion for him when he went on tour. I remember meeting him and being like, “Woah! That’s crazy.” I was a big Strokes fan, my sister’s and I-we’re all big Strokes fans. Two days after the Jenny tour I went straight into rehearsals for [Julians’] project. [But] playing without my sisters was weird and that’s what made me ultimately stop playing with other people. After two years playing for other people, I just thought “We need to get our act together, I want this to be HAIM.”

GOALS FOR THE YEAR: Our goals are just to write more songs and to play to as many people as we can.

FOR MORE INFORMATION ON  HAIM, VISIT THEIR FACEBOOK PAGE.