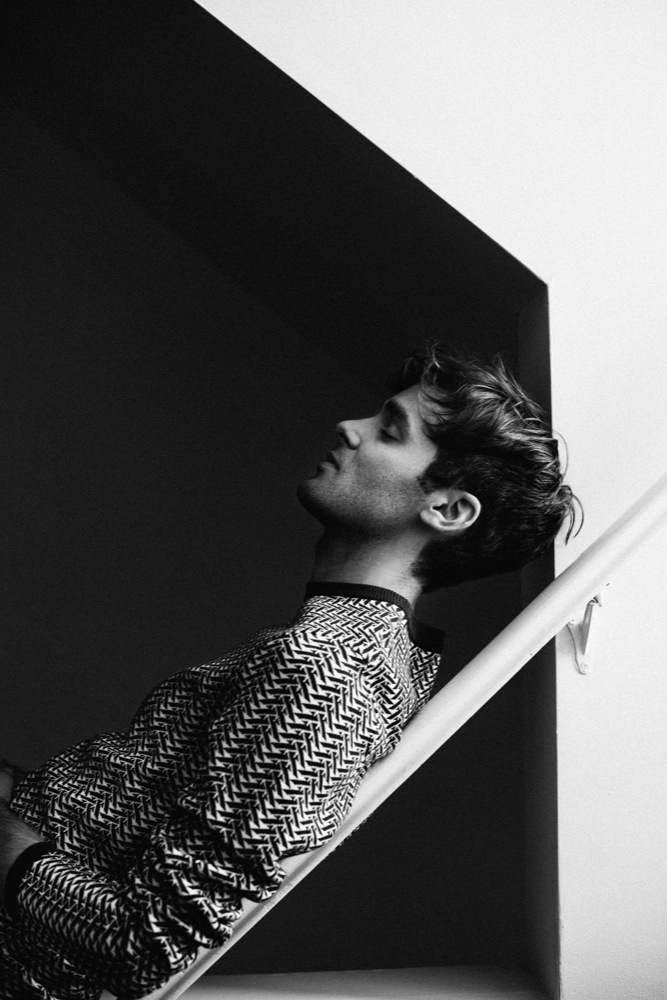 From the age of nine until he attended the prestigious Berklee College of Music in Boston, Jackson Phillips was a jazz drummer. Drums were the first and only instrument he played, but while at college, things changed: “I don’t know if you’ve seen Whiplash…it wasn’t to that extent, but it was very competitive and people weren’t nice to each other. I became more interested in songs.” He then learned piano, transitioned into production, and by the age of 21 was creating synth-based songs that were soon released through his first band, Carousel. Now, however, the 25-year-old has shifted away from electronics, taught himself guitar, and left Carousel behind in favor of his new solo project, Day Wave.

This Friday, July 17, marks the release of Day Wave’s debut lo-fi guitar-based indie rock EP Headcase. Produced and recorded entirely by Phillips at his home studio, the five tracks introduce a sound fit for hazy summer days tinged with slight melancholia and nostalgia. Lyrically, Phillips explores his own personal qualms (“What am I good for? / Somebody help me / I don’t know anymore”), while sonically the music features a slight fuzz over his alto and falsetto vocals, steady percussion (his background with drums is evident), and newly learned guitar. “I just [learned guitar] by ear. I’m sure I play with the wrong technique,” he adds with a laugh.

Following school in Boston, Phillips briefly lived in New York and Los Angeles, but landed in Oakland, where he has developed Day Wave for the past year. So while the first piece of music he ever bought might have been Coolio’s “Gangsta’s Paradise” single (“I loved everything on MTV in the ’90s,” he says), Phillip’s tastes have certainly evolved, and he now looks to New Order, Joy Division, Brian Wilson, and The Beach Boys, among others. Just before the release of Headcase, we caught up with the musician, songwriter, and producer.

EMILY MCDERMOTT: I don’t know if you remember, but we met last summer at TBD Fest…

JACKSON PHILLIPS: I remember! We went on the horrifying ride. I was just thinking about that with one of my friends, who was on the ride with us. We were talking about how scared for our lives we were. Remember the guy was like, “If you don’t sit in the right spot, it might fall over.” [laughs]

MCDERMOTT: We all had to balance it out perfectly.

PHILLIPS: So that was scary.

MCDERMOTT: And that was when you were in Carousel. Now you’re Day Wave. What was the transition like? What made you say, “I want to do my own thing?”

PHILLIPS: For the past couple years, even when I was doing Carousel, I was mostly being inspired by guitar music and I wasn’t really making guitar music. The problem was that I didn’t play guitar, so that was kind of an issue. [laughs] As I got more comfortable putting out my own songs with Carousel, I just thought I could do it. I guess I was hitting a wall creatively with Carousel, so I bought a guitar and was like, “Alright. I’m gonna do this.”

MCDERMOTT: So you taught yourself guitar within the last year?

PHILLIPS: Yeah, I bought my first guitar a year ago and started recording and figuring it out. Then, after six months or so, I got to a point where I was like, “I’m going to put out one of these songs.” From the first song to now, I got more and more into it; I’ve been working on it pretty much every day. With each song, the reception was better and better, so it just kept me going.

MCDERMOTT: What is the writing process like for you?

PHILLIPS: I usually start by writing on guitar. I’ll come up with the chord progression usually first, then I’ll write a basic verse and a basic chorus—something so that I can start recording with an idea. I don’t like to start recording with no idea, because I can’t really get my foot in the door with that particular song. I’ll usually write a skeletal structure of a song on the guitar, just basic songwriter style, and once I’m recording I’m collaging melodies and different lyrical ideas and it just kind of comes together. It’s a weird process.

MCDERMOTT: What about the lyrics? What inspires you?

PHILLIPS: Lyrically, with this project, I’m trying to be honest with myself. In the past, I wasn’t as comfortable as a songwriter, which is also why I worked with other band members rather than doing it by myself, even though I was always the producer in Carousel. So in the past I did more fictional stuff, where I was making up stories; I wasn’t as comfortable talking about my own feelings and experiences. But with this, I just thought, “Why not? I’ll probably feel better if I’m writing about my own experiences.” So that’s where I’m pulling from.

MCDERMOTT: What changed that allowed you to become more open and honest with yourself?

PHILLIPS: I was definitely inspired by certain artists who I was listening to, who I connected with, because it felt very personal, it felt honest. So that inspired me to do it myself. I’ve been pretty inspired by Brian Wilson and The Beach Boys—Pet Sounds, I still listen to it everyday. It just never gets old. Lyrically, I really connect to that because it sounds like it’s coming straight from Brian, what he was feeling.

Another influence for me, something that’s really helped me with the guitar stuff, has been listening to a lot of Joy Division and New Order. That’s really where I’ve been able to pick up some ideas about how to record guitars and use single-note lines rather than chords to cerate more of a fluid sense of harmony. They do that very well and it’s really simplistic. I’ve been able to pick up a lot from that.

MCDERMOTT: Are those the people you were inspired by even when you were making music for Carousel?

PHILLIPS: To an extent. I think I got more into it later on in Carousel. I didn’t really dive into The Beach Boys until a couple years ago. That is really inspiring on a lot of different levels, whether it’s musically—the music is pretty deep—or sonically, the way it sounds; there’s such a charm to those recordings. That’s something I really think about with Day Wave. I want to make sure that sonically it’s got character, got charm, rather than something that’s very perfectly mixed. The music, I run it all through tape, an old reel-to-reel, to give it some character and some sort of charm.

MCDERMOTT: When did you start running your music through tape?

PHILLIPS: That was part of this project. One of the issues that I came across [with Carousel] was that a lot of my songs were sounding sterile to me. So one of the first things I tried was using cassette tape decks and recording everything through cassette. That sounded cool, but it was a little too lo-fi and I wanted to bring it up a little bit. I bought an old reel-to-reel off Craigslist and that’s when I really found the sound I liked.

I had made the mistake before of trying to mix it too clean and spending too much effort on the mix, when really that’s not what draws me to the song; what draws me to the song is that it has character. Sometimes when you overly mix it, it looses the character. To me, that’s a big problem with a lot of the current music, especially in rock and alternative music. A lot of it sounds sterile, so I try to avoid that.

MCDERMOTT: What are some of the biggest things you’ve learned about yourself since you moved to Oakland and you started writing on your own?

PHILLIPS: Oakland’s pretty low key. There’s not a lot of distractions compared to a place like L.A. or New York, where it was easy for me to spend less time on music and socialize or go out and do things. Here I have a house and a home studio that’s separate from my bedroom for the first time. [laughs]

I’ve learned to trust my own gut instinct and my own musical taste. I think that’s something that was bothering me before, where I was always seeking someone else’s approval for each step in the songwriting process. When you’re working with someone else, you tend to bounce all your ideas off of them and almost have someone looking over your shoulder. For me, I’m more confident now in my own taste, hearing something, and if I like it, keeping it—not relying on someone else’s opinion. I was never that confident. It’s helped me.

MCDERMOTT: Where do you look outside of music and daily life for inspiration?

PHILLIPS: I watch a lot of movies. I go through phases; sometimes I’ll watch things a little more like Quentin Tarantino-type movies or even kinda cheesy ’80s stuff, like Nightmare on Elm Street—I just watched five of those in a row for some reason the other week. I love the music in those cheesy scary movies. I also just watched some Lars von Trier the other week, Melancholia and Anti-Christ, which both just made me feel weird. I watch a lot of movies and I can’t pick favorites when it comes to anything. I’m very indecisive.

MCDERMOTT: Would you ever want to score a film?

PHILLIPS: I actually have. I scored a short film for a friend about a year and a half ago. It was really fun. I loved it. I would love to do more of that. I’m pretty into the stuff that Trent Reznor has been doing for David Fincher, who made Girl with the Dragon Tattoo, Social Network, Gone Girl…I really like how he does those scores. I don’t know how I would go about a [feature] score, if it would be more synthesizer based or what.

MCDERMOTT: So what’s next after the EP?

PHILLIPS: I’ve made a lot more music than just this EP, so I don’t think there will be much of a lag between this EP and more music coming out. As far as the live show goes, we’re doing a run with Blonde Redhead in September. It’s really fun to take it from recording all these songs by myself to putting the band together with some of my best friends. This band, I really wanted to keep it very raw and not use any backing tracks. In the past, when I was doing more electronic stuff, it was very backing track heavy, and this is fun to just play instruments, not rely on a computer.