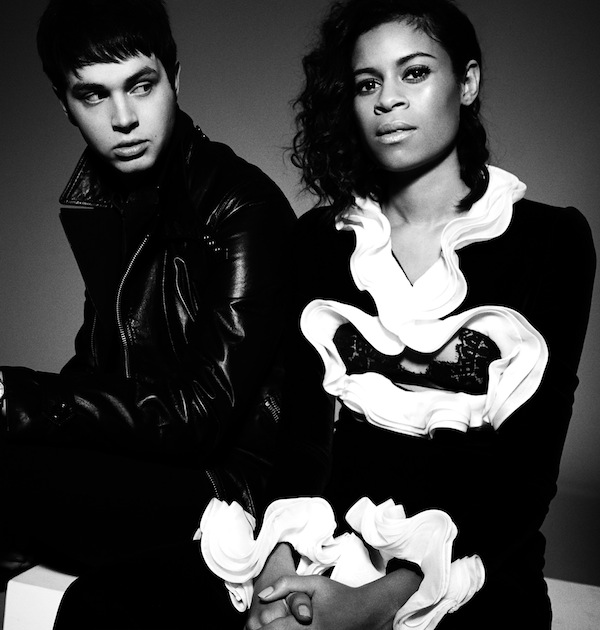 ABOVE: ALUNAGEORGE IN LONDON, FEBRUARY 2013.

Though they have the Internet to thank for their union, technology has not always been kind to the members of AlunaGeorge. “I saw an e-mail argument I’d had with an ex that had continued even after I stopped opening his e-mails,” recalls singer Aluna Francis of an incident, which occurred a few years ago. “There were loads more, and they were really long and sent after the argument had finished. That was weird and intense.” In these upsetting missives, though, the young electro-R&B duo from London saw opportunity; the rants inspired the song “Put Up Your Hands,” from their 2012 debut EP, You Know You Like It (Tri Angle), and furthered their swift ascent in the British dance scene.

Over the past year, Francis and producer George Reid—who first connected via MySpace in 2009—have harvested the understated, soul-derived vocals and chopped-and-screwed glitch-house beats of the EP into high honors from the U.K. music industry. They were nominated for the Critics’ Choice Award at the 2013 BRIT Awards and finished second on the BBC Sound of 2013 list—the former honor came so unexpectedly that they were forced to cancel a previously booked show to attend the ceremony. “All that surpassed our expectations. We had no idea real people like our music,” says Reid, who previously played guitar in the math-pop band Colour. “It’s pretty amazing that it connected to so many people.”

AlunaGeorge’s music is an unlikely synthesis of influences, simultaneously recalling Flying Lotus in its hiccupping synthetics, Aaliyah in the keening choruses, and Purity Ring in its suave iciness. But the pair have also flirted with more futuristic experimentation: the fall single “Your Drums, Your Love” is a brittle and downbeat ballad with almost robotic dissonance. They also recently linked with Disclosure for the latter’s U.K. garage-dance single “White Noise.”

AlunaGeorge’s debut full-length album, Body Music (Island), came out in the U.K. in July, and a European tour and full circuit of festivals, including Glastonbury and Sónar, will coincide. They plan to release the album Stateside by the end of the year. “This seems to be the year we’re doing everything,” says Reid. “It’s crazy to think about.”