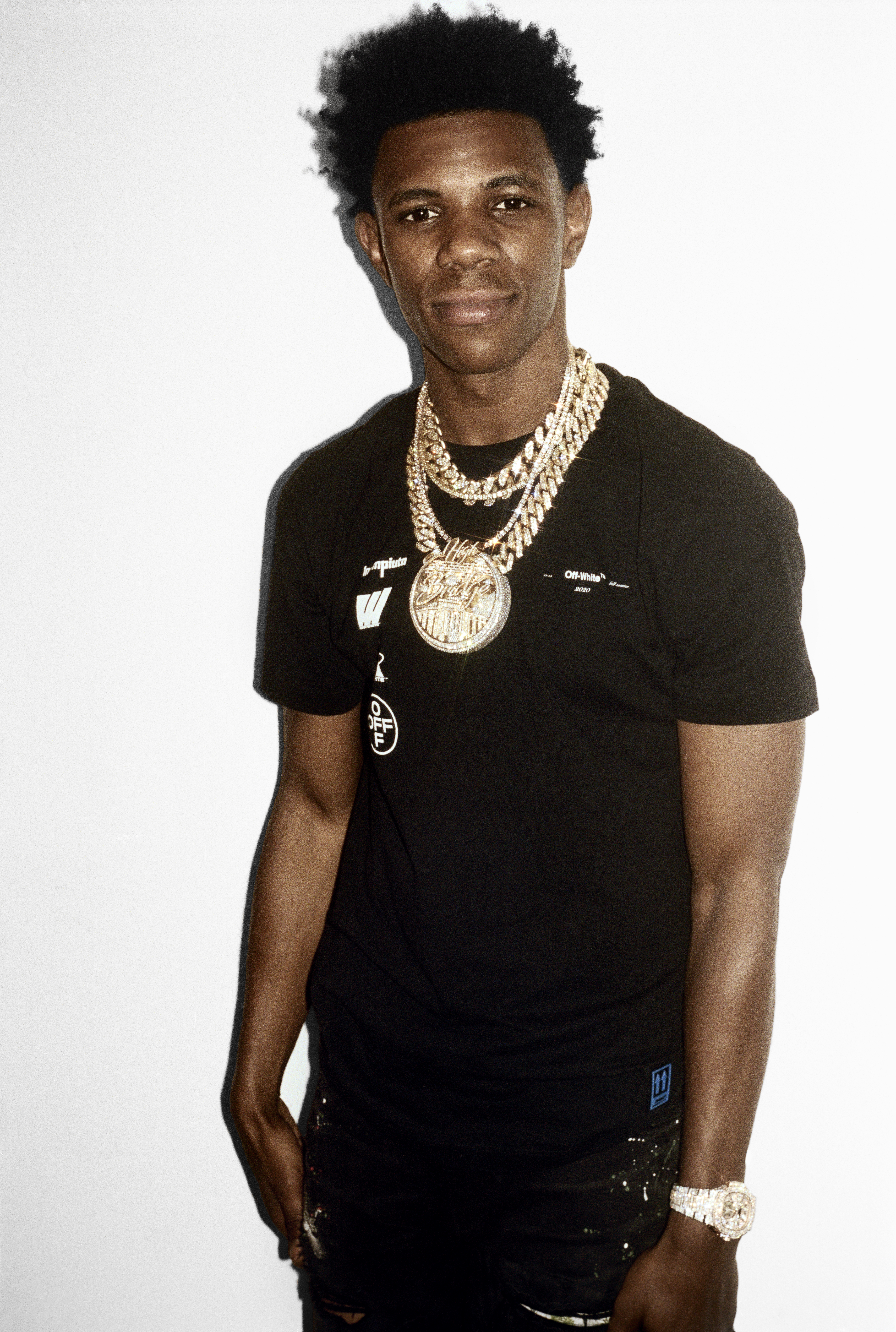 It’s a typical day at the photographer Eric Johnson’s midtown studio: eating sour candies in director’s chairs, watching television as we wait for a chart-topping rapper to ring the intercom. When we were waiting for Rich the Kid, it was Law and Order: Special Victims Unit. For Anderson Paak, it was Purple Rain. But while we were waiting for A Boogie Wit da Hoodie, we had the enormous pleasure of seeing a local news report about a brave chicken in Long Island who literally crossed a road.

The buzzer rings, and after some huffing and puffing, A Boogie Wit da Hoodie arrives with two large bodyguards holding the spoils of shopping spree. The Bronx-born rapper (born Artist Julius Dubose) is quiet and unassuming in person, but apparently has the type of gravitas to show up to a styled portrait sitting with bags of his own recently purchased clothing. His music is also a force to be reckoned with. The 24-year-old’s sophomore album Hoodie SZN was a masterpiece of sing-song rap, alternating between verses and choruses with uncannily complex melodies. When I shake his hand, I pause a bit, unsure whether to address him as “A Boogie,” “Boogie,” or maybe “Hoodie.” Luckily, he was still out of breath from walking up the three flights of stairs to Johnson’s studio.

THOM BETTRIDGE: You’re a little tired from going up the stairs.

A BOOGIE WIT DA HOODIE: I think it’s because I didn’t stretch or nothing. I didn’t sleep in like three days.

BOOGIE: Yeah, so I’m about to stretch.

BETTRIDGE: Do you ever do yoga?

BOOGIE: No. I usually stretch every day, though.

BETTRIDGE: Have you been recording? Is that why you didn’t sleep?

BOOGIE: Yeah, at the studio working on my album. It’s crazy right now. I’m making different type of shit. I’m making the type of music that fans really want to hear, and I mix it in with what everyone wants to hear. I don’t have to just target one fan base. I just try to capture everybody at once.

BETTRIDGE: How do you decide who to collaborate with? That can always be such a loaded decision.

BOOGIE: It’s natural. Me and Uzi [Lil Uzi Vert] just did ten songs in the studio. We didn’t like five of them, but then it was an eye-opener at the end of the day. It was our first time really chopping it up. We go to the same studio and have the same engineer. He was making his album. I was making my album right there, also.

BETTRIDGE: What’s the first thing you like to do when you get to the studio?

A BOOGIE: I listen to a beat for ten seconds, and if I don’t like it, I play the next one. I keep on going until I find the beat. I put it on pro-tools, then I record melodies. If I feel like I could do better, I pick it up later, and go back to it. I write and I freestyle. It depends on the type of song, really. I used to write for three years. Then I ran into Thugga [Young Thug] in the studio and he taught me the game where it was straight just, “Go ahead.” So I’ve just been freestyling ever since then.

BETTRIDGE: You said you were trying some new things for the first time with this upcoming album. What, exactly? BETTRIDGE: Is it hard to sit on something like that?

BOOGIE: I’ll download the song and bump it for a good five months. When it comes, I hate the song. I get tired of my own voice, so I try to make up voices. I try to make it deeper, or make my pitch go up.

BETTRIDGE: I feel like some people find that one vocal setting and then that’s their signature.

A BOOGIE: I shop every day. I don’t just shop at one store, because I don’t like looking like a mannequin.